How I Do It - Otoplasty: Anterior scoring technique
By Anas Naasan and Adeeb Paddy Naasan

Standard intraoperative preparation and draping is carried out. The ear is folded back and the intended antihelix (antihelical fold) is marked (Figure 1). Tattooing of the new antihelix, using a blue needle and ink, is done. It is inserted through the antero-lateral skin over the centre of the intended antihelix, and pushed to the posterior surface. A dumbbell shaped ellipse of skin is marked posteriorly, centred around the exit points of the needle. If necessary the ellipse can be extended into the earlobe (Figure 2). 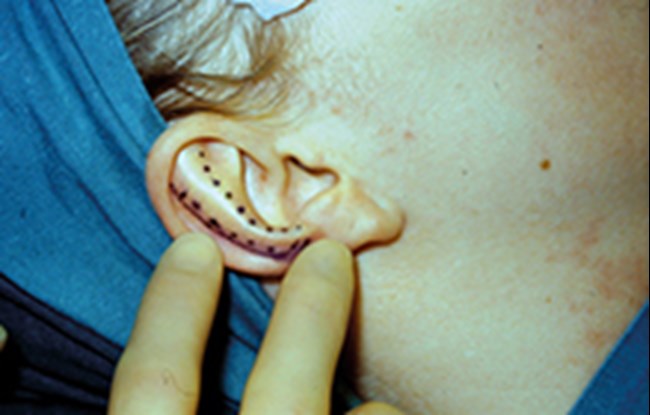 Figure 1: Intraoperative marking – the solid line marks the site of incision into the cartilage. 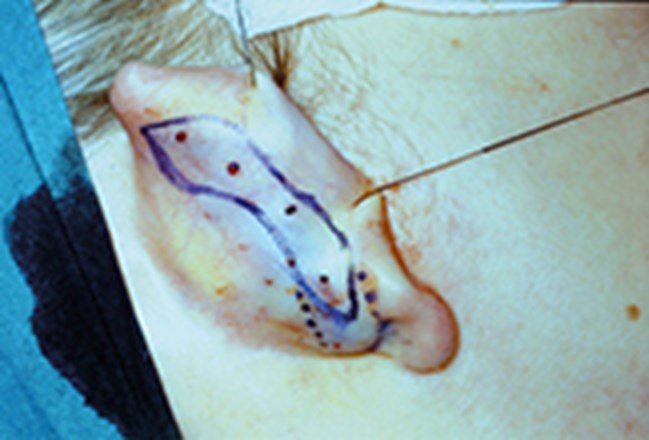 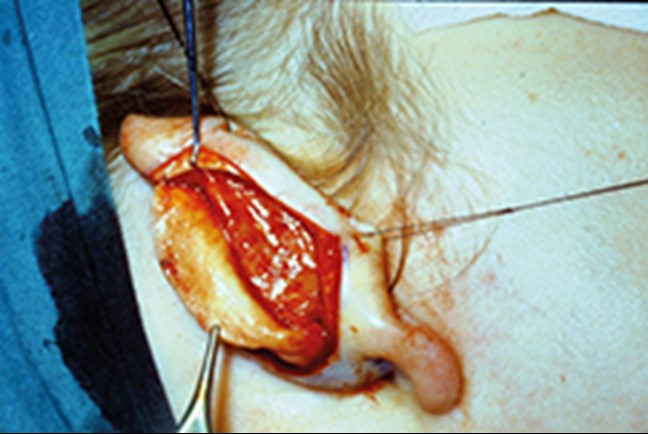 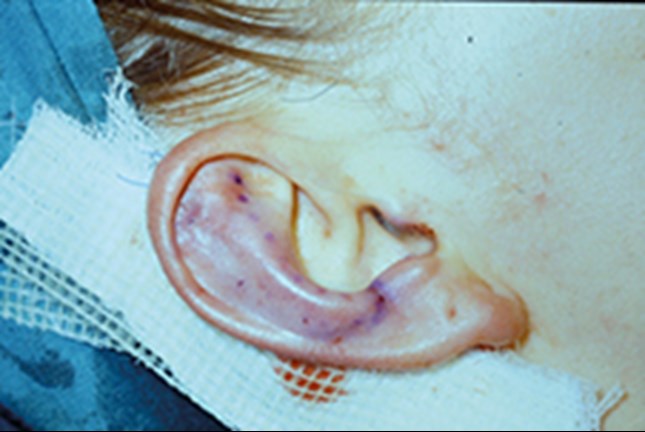 Proper understanding of the anatomy of the antihelix is the key factor in the anterior scoring technique, and in reducing the incidence of residual deformity and need for revision surgery. The antihelix is a smooth, round, usually narrow, curve in the middle third of the ear. It spreads out superiorly to form superior and inferior crura. The superior crus, in contrast to the inferior, has a slight curve which finishes gently in the scapha as well as the triangular fossa.

After preoperative markings are done accurately, infiltration with local anaesthetic and Epinephrine in subcutaneous plane is performed. The ellipse of the posterior skin is removed. The cartilage is then incised along the scapha postero-laterally and superiorly to expose the anterior surface. The dissection should be done very carefully to avoid buttonholing the antero-lateral skin. The cartilage is then scored in line with the tattooed marking of the intended antihelix. A gentle weakening of the anterolateral surface of the cartilage is required. This forces the cartilage to fold away from the scored surface, as per Gibson’s principle (Figure 3). A vicryl stich is sometimes used to hold the lower free edge of the cartilage and to help reconstruct the natural narrow part. The posterior skin is closed with subcuticular prolene or vicryl (Figure 4). The final corrected position should project about 1.8-2cm, as measured from the lateral surface of the ear to the post-auricular scalp. Headband dressing, consisting of Jelonet, gauze and cotton-wool padding, is applied for one week.

An incision that has been placed more antero-medially could result in an unnatural looking superior crus and / or residual prominence of the upper pole, owing to creation of a large unsupported scapha laterally. The upper extremity of the incision in the cartilage should not be continued beyond the scapha. Extending the incision through the helix, to overcome the resilience, should be resisted as it may result in a pointed ‘Spock-like’ deformity.

The earlobe should be aligned with the helix. If necessary a formal set back procedure is performed. A variety of skin and / or cartilage techniques have been described. If, during otoplasty, the prominent lobule is not positioned in harmony with the rest of the auricle, telephone ear / reverse telephone ear deformity or residual earlobe prominence may occur.

The goal of otoplasty is to produce a permanent correction with natural looking ears, which are not recognisable as operated ones. 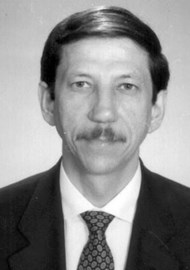 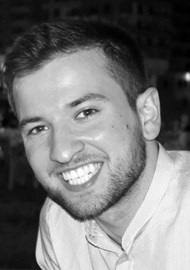