How I Do It - Earfold®: A new technique for the correction of prominent ears
By Norbert Kang

To follow on from the last issue of PMFA News (now The PMFA Journal) in which we featured two different approaches to otoplasty (see HERE and HERE) Dalvi Humzuh, Sub-Editor for the section, approached Norbert Kang, Consultant Plastic and Reconstructive Surgeon and the inventor of the Earfold® implant, to share with us his personal approach to the correction of prominent ears using the implant.

Offering an alternative to standard otoplasty, Earfold® is a small, permanent, metal implant coated with 24-carat gold and made of a thin strip of metal alloy (nickel and titanium) making it super-elastic with shape memory. When inserted into the front of the ear, Earfold® folds and reshapes the underlying cartilage according to the shape that has been pre-programmed into the implant.

Earfold® has a number of advantages as the outcomes are highly predictable and are reversible if the implant is removed; infection and implant exposure rates are low. The procedure takes around 20 minutes, which makes it possible to perform the treatment under local anaesthesia, even in children.

The Earfold® implant is not suitable for every patient with prominent ears, so treatment begins with a careful preoperative assessment using Prefold® positioners (Figure 1). Patients are asked to sit in front of a mirror and are then shown how their prominence can be corrected using the positioners. Prefold® is identical in shape, size and elasticity to the Earfold® implant but without the sharp metal tines that are needed to grip the cartilage when Earfold® is released into the ear. 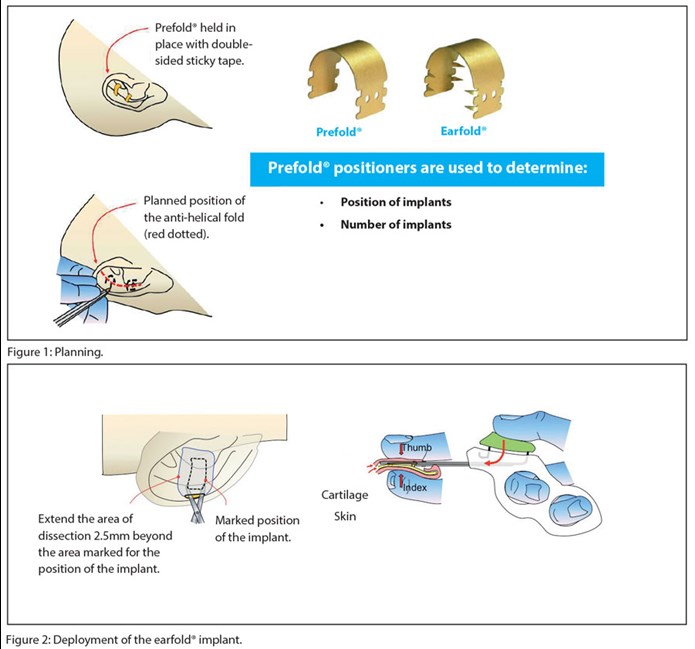 Therefore, Prefold® can be used to predict where each Earfold® implant must be placed to reshape the antihelical fold to correct the prominence perceived by the patient.

Approximately 50% of patients need to have one implant inserted into each ear and the other 50% need two implants. As with suture-based techniques, it is possible to predict (roughly) where each implant must be placed by carefully observing where it is necessary to push back on the helix to correct any prominence.

Once a decision has been made on the position and number of implants required by the patient, surgery to insert the implant can be performed – typically under local anaesthetic. The position of each implant in relation to the planned position for the new (or enhanced) antihelical fold is carefully marked on the anterior skin of the ear (Figure 1). Local anaesthetic is now used to hydro-dissect the soft-tissues of the anterior surface of the ear. An incision (8mm long) is made at a minimum of 2-3mm away from the proximal edge of the future footprint of the implant. A subcutaneous / subperichondrial pocket is created to allow the implant to be inserted using the pre-loaded introducer (Figure 2). The implant is then released onto the anterior surface of the cartilage, reshaping it immediately and thereby correcting the prominence of the ear. A single suture is used to close the incision and the wound is then dressed with a single Steristrip®. No other dressings are necessary. 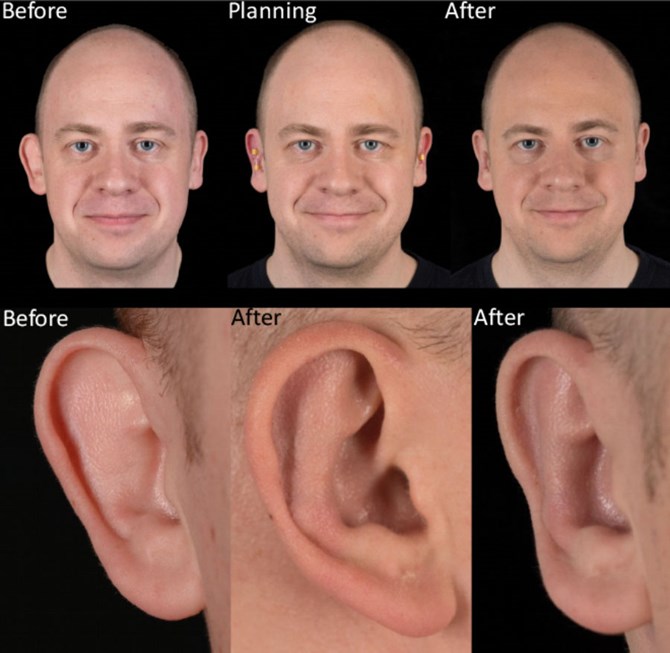 Figure 3: Typical outcome. Before and three months after treatment.

Patients are advised to avoid sleeping on their ears for three to four weeks and to avoid swimming and contact sports for a similar period. This is to avoid the possibility of flexing their ears before the implants have settled in, since movement of the ear after surgery can result in the implant becoming dislodged. If this happens, the implant may become visible (which is unsightly) and may interfere with the correction of the prominence. It may also increase the risk of erosion of the implant through the skin.

Patients are warned that there will be some pain (two to three days in most cases), bruising and swelling (one week in most cases) after treatment. There may also be some degree of sensitivity for up to three months, but that depends on the patient.

Declaration of competing interests: The author works as a paid consultant for Allergan to help with training of surgeons in the use of the Earfold® treatment. This includes reimbursement for attending symposia and speaking at educational events related to Earfold®. However, he does not receive reimbursement for any research carried out in relation to Earfold® nor does he hold any stocks or shares in Allergan. 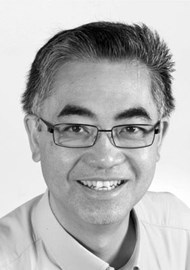