Melasma treatment – what have we achieved in 42 years?
By Clare Amrani

Melasma is a hyperpigmentation disorder which has been the subject of intense research over the last 40 years. As yet no definitive therapeutic strategy has been demonstrated to eradicate it or to avoid relapse. The author provides an up to date review.

Melasma is a depigmentation condition that effects the skin in areas exposed to the sun. The facial types are the most common and fall into three components; central facial, malar and mandibular. The central facial pattern is by far the most common. Although very rare, the extra facial forms are also described. The exact cause of melasma at molecular level remains largely unknown. However, the predisposing factors are well described and include sun exposure (UV), genetic and hormonal factors.

UV exposure: The role of UV light as a predisposing factor to melasma has been consistently demonstrated both in clinical settings as well as in vitro [1]. Indeed UV light ability to generate oxygen free radicals and promote an increased production of melanin is thought to be a potential mechanism. This is supported by the fact that melasma patients are shown to have higher levels of oxidative stress markers than the control group [2]. Supporting that concept is the findings that skin areas stimulated by UV light are the site of an increased level of genes involved in melanogenis [3]. Furthermore, vascular endothelial growth factors (VEGF), which are produced by keratinocytes in response to UV damage, have been shown to promote the growth of human melanocytes in tissue culture [4]. The latter is believed to be one of the mechanisms of enhanced melanocyte activity in melasma. This has a direct practical clinical implication. Indeed, the role of protection against UV light has been consistently and clearly shown by many studies including two randomised control trials showing not only the prevention in melasma relapse [5] but also enhancing the efficacy of hydroquinone [6], a well-known inhibitor of melanin production.

Hormonal factors: Hormonal factors play a pivitol role in the production of melasma. This has been consistently supported by many studies correlating melasma with pregnancy, oral contraception or other hormonal therapies or conditions [7,8]. An in vitro comparative study of both epidermis and dermis have shown a significantly elevated progesterone receptors of the melasma skin when compared to the control [9]. However, the definitive role of hormones is not widely accepted and there appears to be no strong consensus about the exact role of hormonal factors. Indeed, in a large multicentre study performed in several countries looking at the role of UV and hormones in the development of melasma [10], the authors were only able to show 20% of the pregnancies were associated with melasma. The striking finding in this study was the highest risk factor in pregnant woman was correlated to greater outdoor activities; suggesting again a greater role of UV exposure. Thyroid dysfunction is also reported as a hormonal contributing factor. One study reported that patients with melasma have been found to be four times higher than the control group [11].

Strictly speaking, melasma is not an inherited disorder, although some family cases have been described. Nonetheless there is a genetic predisposition in darker skin types. Melasma effects mainly women, in particular women with darker skin.

Clinical relevance of the histological classification of melasma

Until recently the near dogmatic view was that melasma fell into three distinct histological types: epidermal, dermal and mixed. From that simple classification raised the consensus that establishing which type of melasma will define which treatment and furthermore even predict outcomes. Indeed, the dermal type has been consistently shown to be more difficult to treat with a higher rate of relapse.

Although this simple classification has been extremely helpful clinically, in more recent studies using sophisticated tools including electron microscopy, immunocytochemistry and in vivo confocal microscopy it clearly emerged that every melasma is actually of a mixed type, as melanin and melanophages are shown to be distributed in a non-homogenous fashion [12]. Therefore, it would appear that melasma is not solely an epidermal problem but in fact a complex pathology involving epidermal cells, keratinocytes, melanocytes, fibroblasts as well as vascular endothelial cells [12]. Areas with melasma are also shown to have a higher vascular network [12]. This concept is opening new research avenues with potential clinical implications.

There are four basic principles of managing melasma: photoprotection, topical, oral or interventional.

UV exposure is one of the main aetiological factors. Therefore, year round UV protection should be the absolute adjuvant to any other treatment. It is well documented that in the absence of sun exposure protection, systematic recurrence and relapse of melasma is systematic. The biochemical rationale in this crucial role of UV exposure has been summarised above (UV exposure). 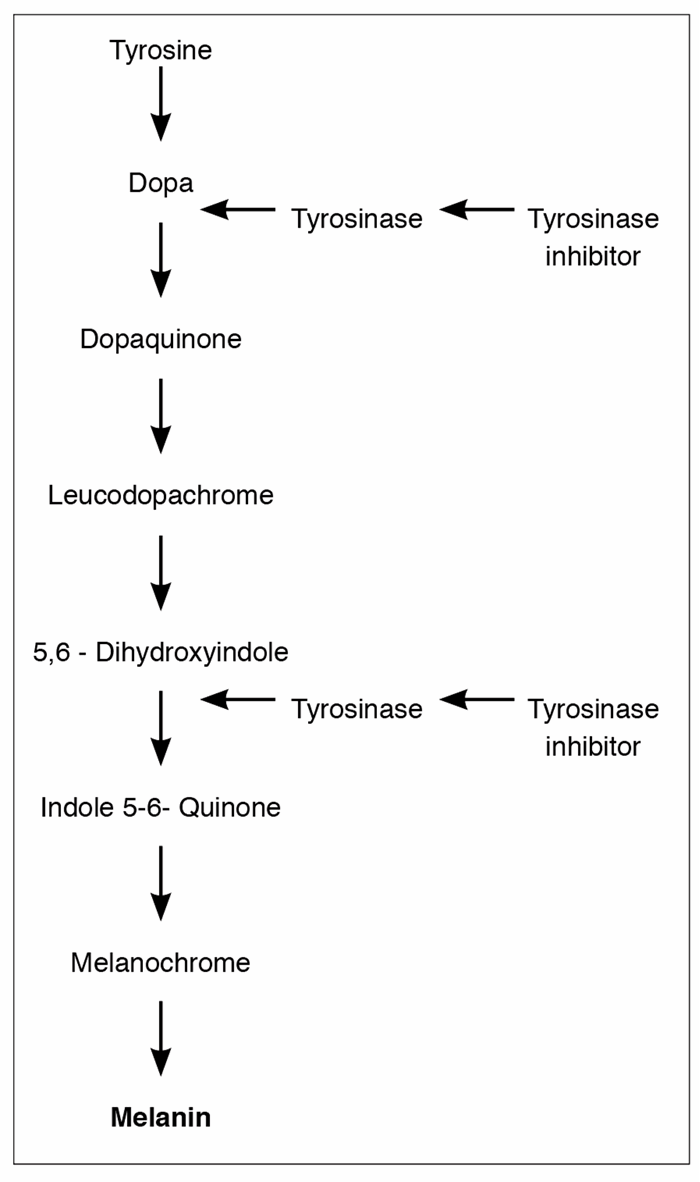 Hydroquinone (HQ): The currently available pharmacological therapies are based on the inhibition of the pivitol enzyme tyrosinase, which is the key enzyme in melanin production (Figure 1). Although different drugs have been used for more than four decades no definitive guidelines have been established to treat melasma. Although short-term results can be excellent, long-term can be frustrating as melasma has a tendency for relapse / reoccurrence. HQ is the most frequently used topical agent. It is a phenolic agent that inhibits tyrosinase enzyme responsible for the transformation of dopa to melanin (Figure 1). It is also believed that HQ reduces the melanocyte production. It could also act on the degradation of melanocytes and negatively influence the DNA and RNA synthesis inside the melanocytes [13]. The efficacy of HQ is directly proportional to the concentration. The currently accepted concentration in the UK is 4%. There is a consensus that above 4% the irritant properties become detrimental.

Retinoid: Retinoid reduces the melanin production through several pathways: firstly, it inhibits the transcription of tyrosinase. Secondly, when used in combination with HQ it reduces the oxidation of HQ, thereby improving or enhancing epidermal penetration. Several studies have supported the efficacy of retinoid in reducing, both subjectively and objectively, melasma pigmentation [14,15].

Corticosteroids: Although corticosteroids are known to reduce pigmentation through non selective pathways on the melanin production, and also known to have anti-inflammatory properties, they are not currently considered as a depigmenting drug as a monotherapy. There is an obvious concern regarding the well-known long-term side-effects on the skin including acne and telangiectasia [16,17]. The main interest of steroids is their role as an adjacent in combination therapies.

Azelaic acid: Azelaic acid is a tyrosinase inhibitor. It has the ability to destroy the abnormal melanocytes and reduce their proliferation.

Kojic Acid: Kojic acid is a fungal metabolite with a dual action as a tyrosinase inhibitor as well as a potent antioxidant. As a monotherapy it is much less effective than HQ. However, it has been shown to have a benefit as a dual therapy [15].

The rationale of combination therapy is to improve the efficacy of a single agent but also to minimise the side-effects. Retinoid reduces the oxidation of HQ, thereby improving the penetration and leading to a lower concentration requirement. Steroids can significantly reduce the cutaneous irritant side-effects of other drugs. The original Klingmans formula described in 1975 includes HQ 5%, retinoid 0.1%, dexamethasone 0.1%. This initial formula has been altered by removing / adding or changing one or more of its components to suit individual skin requirements. The most common changes relate to the steroid component and the dosage. The concentration of retinoid and HQ has been reduced in more recent formulas. Combination therapies have been consistently shown to work quicker and more effectively than monotherapies because of thesynergistic effect [18,19].

The most commonly used oral compound is tranexamic acid (TXA). TXA is a synthetic compound of the amino acid lysine. It is a well-known agent in the field of surgery where it is used to treat coagulopathy. It has the ability to bind to the lysine binding site of the plasminogen protein hence it inhibits the plasminogen activator which ultimately inhibits the plasminogen to plasmin transformation. Plasminogen can also be found in the keratinocytes, as well as the basal epidermal cells. UV has the ability to stimulate the keratinocytes / plasminogen system. This results in the production of prostaglandin and Leukotrienes. These two compounds are known to stimulate the production of melanin. It is the TXA ability to bind to plasminogen that will inhibit the melanogenesis.

Another mechanism of TXA may involve the inhibition of vascular endothelium growth factors and endothelin 1 which are known to increase the vascular network [20]. This is important in light of the new concept regarding the histological classification described above [12]. Although TXA has the ability to act on both melanogenis as well as the surrounding cells, it is not devoid from complications [21].

The efficacy of TXA and melasma has been widely studied. In two randomised controlled trials, TXA in combination with topical retinoid, topical HQ and steroids displayed a quicker response with longevity compared to the control group [22,23].

Interventional therapies described to treat melasma include laser therapy for pigmentation and for reducing the vascular network, chemical peels, microdermabrasion and microneedling. These procedures are usually associated with other therapeutic modalities such as topical therapies. Most studies support an additional beneficial effect when combined with topical therapies. Laser therapy for melasma remains challenging, particularly in patients with darker skin types. In this particular group, which is known to be at a higher risk of melasma, laser therapy can generate side-effects. Indeed, the darker skin has larger and non-aggregated melanosomes [24]. This higher concentration of melanin has the ability to absorb laser energy more diffusely and therefore trigger thermal lesions within the adjacent tissues. This can result in side-effects such as post inflammatory pigmentation and / or scarring. In addition, the melanin surrounding the area with melasma can act as a competitor (by absorbing the energy intended for melasma hence decreasing the efficacy).

For all these reasons, new generations of lasers have been developed. Recent studies have demonstrated safety and efficacy of fractional picosecond laser for treatment of melasma [25,26,27]. These studies showed a clear benefit of the laser as an combined treatment with HQ or as a monotherapy in dark skin. However, the lack of long-term follow-up and the small sample studies does not allow any solid conclusions to be drawn.

“Despite 42 years of experience in managing melasma and the existence of multiple pharmacological and interventional therapeutic tools, there is currently no definitive treatment to eradicate melasma or to prevent its relapse”

Despite 42 years of experience in managing melasma and the existence of multiple pharmacological and interventional therapeutic tools, there is currently no definitive treatment to eradicate melasma or to prevent its relapse. This frustrating aspect must be included in the consent form.

Nevertheless, new knowledge and understanding are emerging at molecular and histological level. This supports the notion that melasma is multifactorial in its aetiology and does not fall into three simple categories. One should revisit therapies that will manage all of the complex aetiology particularly targeting the complex interplay between melanocytes, keratinocytes, fibroblasts, vascular endothelial cells, as well as molecules recreated by these cells. 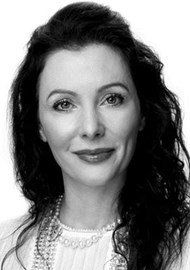