The role of angiogenesis in wound healing, scarring and tissue regeneration
By Ferdinand V Lali and Anthony D Metcalfe

In the UK alone there are 175,000 people who visit Accident & Emergency departments with burns each year. This results in around 13,000 hospital admissions, of which 1000 are due to severe burns [1]. Over half of these admissions are children under the age of five (Figure 1) and poor outcomes in these young patients leave them with lifelong sequelae. Visible scarring for example has a profound and adverse physical and emotional impact [2]. Additionally, thickening of the skin and loss of pliability caused by contracting scar tissue can severely limit movement and lead to significant disability.

Scar tissue is often devoid of specialised structures such as hair follicles and sweat and sebaceous glands. Fully functioning nerves do not always regenerate correctly or timely in scar tissue and can cause pain and itching which leads to further distress. Multiple operations are often required to release the tension created by scar contraction to allow movement and to reconstruct and improve the skin’s physical appearance. Poor healing outcomes are often determined by early events in the healing process. One of these early events is re-establishing a blood supply (and oxygen delivery) to a repairing wound. Early interventions, especially in burn wounds are therefore likely to be beneficial in improving healing outcomes.

At the Blond McIndoe Research Foundation (BMRF) we are using the latest tissue regeneration approaches to study how we can improve outcomes for wound healing. We work closely with the clinical teams at Queen Victoria Hospital (QVH) who routinely treat patients with burn wounds, skin ulcers and carry out reconstruction of tissue following breast, melanoma and maxillo-facial surgery. Our regenerative studies focus on the skin which is the largest organ in the body and the protective outer layer. As a result of this, it is frequently exposed to injury. Working with clinical samples provides an excellent platform for translational research and we believe that the insights from scarring in the skin are applicable to fibrosis elsewhere in the body.

Figure 1: Image of a burn on a child’s forearm taken at a follow-up consultation.

In adult tissue and organs, injury leads to an orchestrated sequence of events that culminates in healing. These include haemostasis when a clot forms to stem the loss of blood, rapidly followed by an inflammatory phase when immune cells infiltrate the site and release mediators of inflammation, cell survival, growth and repair. The inflammatory phase overlaps with a proliferative phase when a provisional matrix is laid down by dermal fibroblasts. This matrix is then infiltrated by a fine capillary network, precursors of the blood vessel to be formed in the healing wound. The final phase of wound healing is extracellular matrix (ECM) deposition and remodelling which takes months to years (Figure 2).

The provisional matrix is a granulation tissue which forms a ‘bed’ over which re-epithelialisation and closure of the wound occurs. Non-closure of wounds such as in severe burns is an indication for skin grafting but the procedure requires a supportive underlying granulation tissue. A number of factors can lead to graft failure such as infection and poor vascularisation. Preparatory debridement (which removes dead tissue from the wound) is determined by the margins of vascularity of the underlying wound bed. Debridement down to a well vascularised depth permits graft take. Following re-epithelialisation or successful skin grafting, the granulation tissue is remodelled over a long gradual final phase of healing. Non-healing wounds fail to autonomously transit this early vascularisation and epithelialisation stage. At the BMRF we are studying improvements to biomaterials for skin grafting and wound dressings that support or stimulate vascularisation of the healing wound. The physiological stimulus for this is a reduction in oxygen supply known as hypoxia.

The role of angiogenesis in wound healing

Essential oxygen supply to the wound is regulated by the process of angiogenesis which is the formation of new blood vessels from pre-existing ones. Angiogenesis lays down blood vessels and ensures perfusion of the tissue. The process is regulated by an oxygen sensing pathway which induces the expression of vascular endothelial growth factor (VEGF) by the cells in the oxygen deprived tissue to promote the ingrowth of blood vessels. Wound healing is a classic case of local tissue hypoxia arising from loss of blood supply due to trauma and thrombotic occlusion (Figure 3). 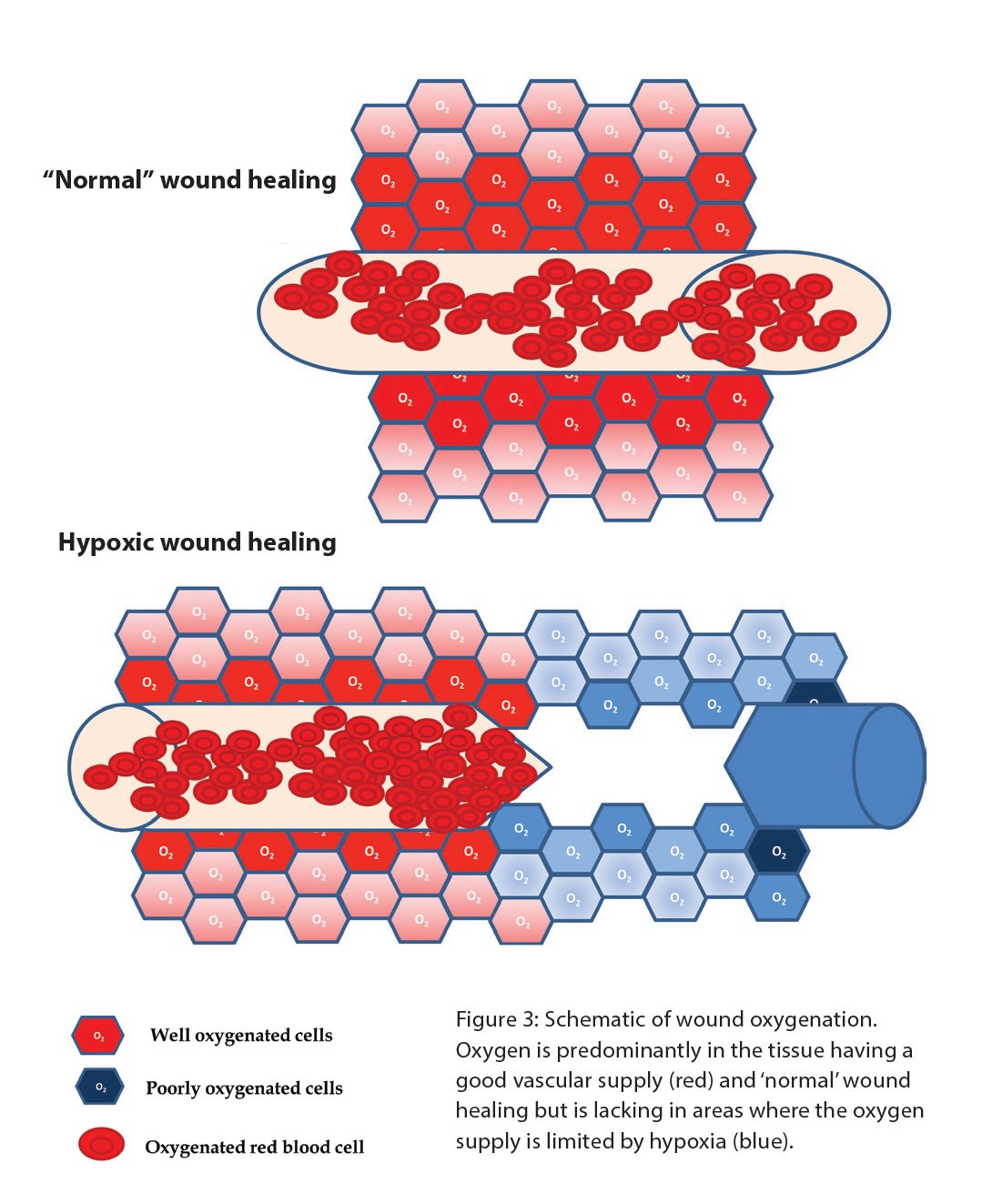 Furthermore, the proliferative phase of wound healing is highly metabolic with increased demand for oxygen and nutrients thus the restoration of blood supply is critically important. In cutaneous wounds, the supply of oxygen is also important for the antibacterial activity of phagocytes undergoing respiratory burst. In this low oxygen environment, VEGF is produced by the inflammatory cells in the wound bed as well as activated fibroblasts and keratinocytes [3,4].

Hypoxia-inducible factor-1 (HIF-1), is the master regulator of oxygen homeostasis, and stimulates angiogenesis through VEGF. HIF-1 contributes to other stages of wound healing through its role in cell migration, cell survival under hypoxic conditions, cell division, and matrix synthesis. Our studies evaluating angiogenesis in wounds are carried out using primary skin cells cultured in a specially designed hypoxic chamber which allows us to mimic a range of tissue culture conditions from hypoxia to supra-physiological oxygen levels. At present, many skin substitute models are being tested in atmospheric oxygen conditions. Cells in the non-healing wound environment are in a harsh milieu of enzymes, changing pH, inflammatory cells and a remodelling matrix. This poorly vascularised microenvironment usually has low oxygen content. In the laboratory, the oxygen supply to cells in a wound can be mimicked by the hypoxic chamber which permits the study of the efficacy of both biomaterials and wound dressings that are being developed to stimulate angiogenesis.

Hypoxia in regeneration and scarring

The normal process of wound healing outlined above can achieve a satisfactory restoration of tissue architecture and function but the outcome depends critically on the anatomical location, severity of injury and recurrent injury and / or infection. Normal wound healing and tissue repair processes often lead to fibrotic scarring. In the skin, this is a disorganised collagen network which fails to restore the normal architecture and tensile properties of the skin. A similar outcome following injury to vital organs may be life-threatening.

The unborn foetus is protected from physical injury and the risk of environmental pathogens. However several studies have now shown that following injury, the developing foetus mounts an efficient scarless healing in the early trimesters. This is a good example of regeneration whereby the structure and function of the injured tissue is fully restored. This capacity to heal without scarring is lost in the last trimester after the development of a functional vascular system. There are important changes in the physiology of the foetus at this stage including the infiltration of inflammatory cells to the site of injury. These changes resemble the wound healing phases in the adult, perhaps in readiness for life outside the womb. In the mammalian species, adult cutaneous wound healing has therefore evolved to favour faster healing at the expense of regeneration. We therefore believe that the absence of inflammation and expression of factors such as the transforming growth factor ß (TGF-ß) family in early foetal wound healing is an important factor in understanding scarring.

Normal skin and a scar have very different features when observed histologically (Figure 4). The epithelial:dermal junction in normal skin has characteristic undulating rete ridges, whereas the epithelial:dermal junction is perfectly flat in a scar (Figure 4). The collagen in the scar is often more densely packed and differently aligned than the collagen found in normal unwounded skin. This may explain why many of the differentiated structures of the skin do not regrow and scarring can be particularly disabling for patients with severe burns. 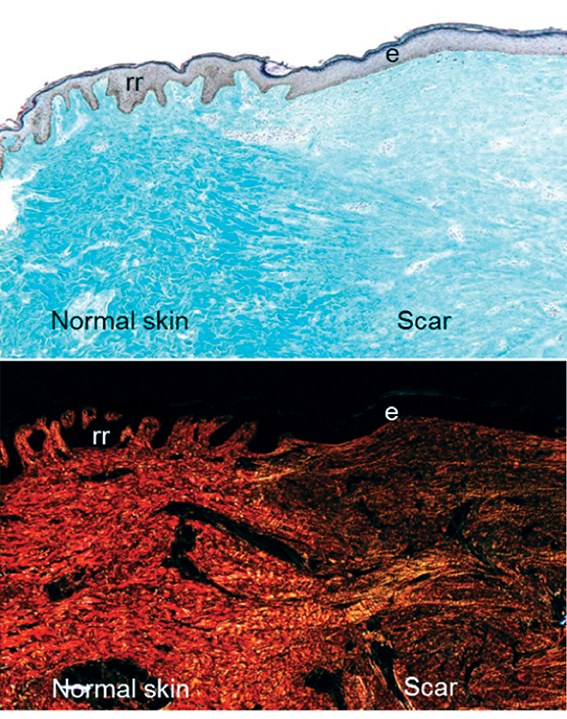 Figure 4: A transverse section through the skin at the boundary between normal skin and a scar. The upper panel shows a Massons Trichrome skin section with the dermis (light blue) and the epithelium (purple). Note the flat epithelium (e) in the scar and the undulating rete ridges (rr) in the normal skin. The lower panel shows a picrosirius red stain, highlighting different collagen structures under polarising light.

The role of TGF-ß family in scarring

During the inflammatory phase, platelets and immune cells secrete cytokines, growth factors and many of the proteins found in the wound. Key among these is the TGF-ß family regulators of tissue repair. The better characterised of these, TGF-ß1 and 3 are respectively thought to have pro-fibrotic and anti-fibrotic effects. In the tissues undergoing repair, the relative amounts of these TGF-ß types is critical for scarring outcome. The release of TGF-ß1 in the early stages of wound healing drives myofibroblast differentiation and collagen deposition in the granulation tissue. However, the excessive stimulation of myofibroblast activity leads to fibrosis and scarring. Recent studies have shown the benefits of TGF-ß3 in anti-scarring therapy [5] so we are interested in understanding the interplay between fibrosis and hypoxia in the inflammatory setting of the adult wound. The scar reducing TGF-ß3 is a target of hypoxia [6,7,8]. Hypoxia may therefore be an important determinant of scarless healing in the foetus which is known to revert to adult-like scarring after the establishment of foetal vasculature at term.

“Non-healing wounds fail to transit the early vascularisation and epithelialisation stage of healing. We are studying improvements to biomaterials for skin grafting and wound dressings that support or stimulate vascularisation of the healing wound.”

In summary, wound healing is a complicated series of overlapping events that orchestrate tissue repair processes, often resulting in scarring. One of the early critical events is to re-establish a blood and oxygen supply to the repairing wound environment. Our studies on the role of hypoxia in wound healing at the Blond McIndoe Research Foundation aim to unlock the importance of local oxygen concentrations in wound for the re-establishment of a blood vessel network and how this impacts healing outcomes from normal repair through to regeneration. 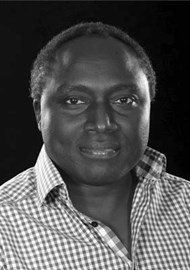 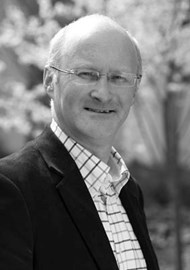