The author provides an overview of the theory behind platelet rich plasma and summarises the published evidence for its use in aesthetic treatments.

Platelet-based treatments, commonly referred to collectively as platelet rich plasma (PRP), have been proposed and advocated for aesthetic treatments of the face for over 20 years. There are over 100,000 PubMed citations of PRP for aesthetic uses over that time; however, fewer than 1000 have appeared in the literature over the past 10 years. This is in stark contrast to the several million Google citations for PRP for various aesthetic indications since 2007. The prospective patient, and indeed even the physician, is faced with the daunting challenge of sifting through the crowded landscape of PRP claims and anecdotal successes to find unbiased and thorough descriptions of results of platelet-based aesthetic treatments.

What is PRP, what’s in it and how might it work?

Platelet-based aesthetic treatments are predicated upon the fact that the human blood clot, in addition to achieving haemostasis, also plays a role in stimulating and facilitating wound healing. While the chief cellular component of the blood clot, the erythrocyte, is felt to promote inflammation through its degradation, other elements may represent raw materials that can be utilised to modify skin and soft tissue physiology. Leukocytes are known to release a number of cytokines, and while some may be pro-inflammatory, others such as platelet-derived growth factor (PDGF) are mitogenic and chemotactic. Platelets, however, are well known to contain and release into wounds numerous cytokines at high concentrations. These include PDGF, transforming growth factor-β (TGF-β), vascular endothelial growth factor (VEGF), epidermal growth factor (EGF), insulin-like growth factor (IGF), platelet factor 4 (PF4) and platelet derived angiogenic factor (PDAF).

The effects of the first four of these are most well described (Table 1), but they are chemoattractant and mitogenic for a number of cells important to wound healing. Finally, of the proteins found in the plasma, fibrinogen plays a key part in wound response. The three dimensional fibrin mesh network formed after the conversion of fibrinogen to fibrin provides a substrate for growth factor binding as well as cellular migration. Indeed, Kakudo et al. showed a significant mitogenic effect of activated platelet poor plasma on adipose derived stem cells as well as dermal fibroblasts [1].

There are a multitude of methods to prepare PRP, from standard lab techniques of differential centrifugation to proprietary devices. Each method produces a unique product, based on the harvested components and their relative concentrations. It is generally accepted that maximal reduction of erythrocytes is advantageous to reduce the inflammatory process stimulated by the death of red blood cells. The presence or absence of leukocytes, degree of platelet concentration and volume of collected plasma and fibrin content are the principal differences between these various preparations. Dohan Ehrenfest et al. have proposed a useful classification to more accurately describe the specific type of platelet preparation.

PRP by definition has a platelet concentration at least five times greater than peripheral blood; in order to attain this, the volume is generally quite small with minimal to weak fibrin polymerisation. Platelet rich fibrin (PRF) has a larger volume and does not have as high a platelet concentration as PRP. Both PRP and PRF can have a minimal leukocyte fraction (‘pure’) or may contain a significant population of leukocytes (‘leukocyte- rich’). This classification divides platelet preparations into four categories: P-PRP, L-PRP, P-PRF and L-PRF (Table 2) [2]. The optimal platelet preparation is yet to be determined.

Over the past 10 years, there have been 21 clinical trials investigating the use of platelet preparations in facial healing and aesthetics. Hom et al. treated 80 experimental skin wounds with P-PRP and noted faster healing than controls, although histologic differences between the groups was negligible within three weeks [3]. Five studies evaluated platelet preparations on fractional laser- induced skin wounds. All five studies [4-8] applied L-PRP topically, intradermally injected, or both.

Three of these studies noted decreased duration of post-procedural erythema and oedema, while two studies found decreased duration of crusting. These findings all suggest accelerated reepithelialisation of fractional laser induced skin wounds when treated with L-PRP. Five studies examined the effect of platelet preparations on skin folds. Two studies utilised P-PRF [9,10], one used P-PRP [11], one used L-PRP [12] and one used L-PRP augmented with basic fibroblast growth factor (b-FGF) [13]. None of these studies used controls (either split-face or control group).

Three studies evaluated responses using subjective patient assessments [11-13], while one study quantified nasolabial fold improvement with Wrinkle Assessment Score [9] and one measured subcutaneous tissue thickness ultrasonically [10]. Subjectively, patients were highly satisfied with the results in all studies; additionally, nasolabial folds were improved by at least one WAS scale point [9] and the thickness of treated subcutaneous tissue was increased [10] at 12 weeks after treatment. Few well-controlled studies have been performed on the effect of platelet product treatment of autologous fat grafts. Gentile et al. found better maintenance of contour one year after fat grafting when fat was mixed with P-PRF in a 2:1 ratio [14]. Conversely, Fontdevila et al. saw no significant effect at either two or 12 months after treatment with autologous fat mixed in a 4:1 ration with P-PRF [15].

“The most well studied aesthetic application of platelet therapy is for treatment of alopecia.”

By far, the most well studied aesthetic application of platelet therapy is for treatment of alopecia, with 10 studies published since 2007. Additionally, hair growth is more amenable to accurate quantification. Four studies used L-PRP (one with “supplemental plasma protein”), and three each employed P-PRF and P-PRP. These studies treated the scalp two to four times, usually spaced two to four weeks apart.

P-PRP has been shown to increase the percentage of hair in anagen phase [19] and increased hair density [20]. 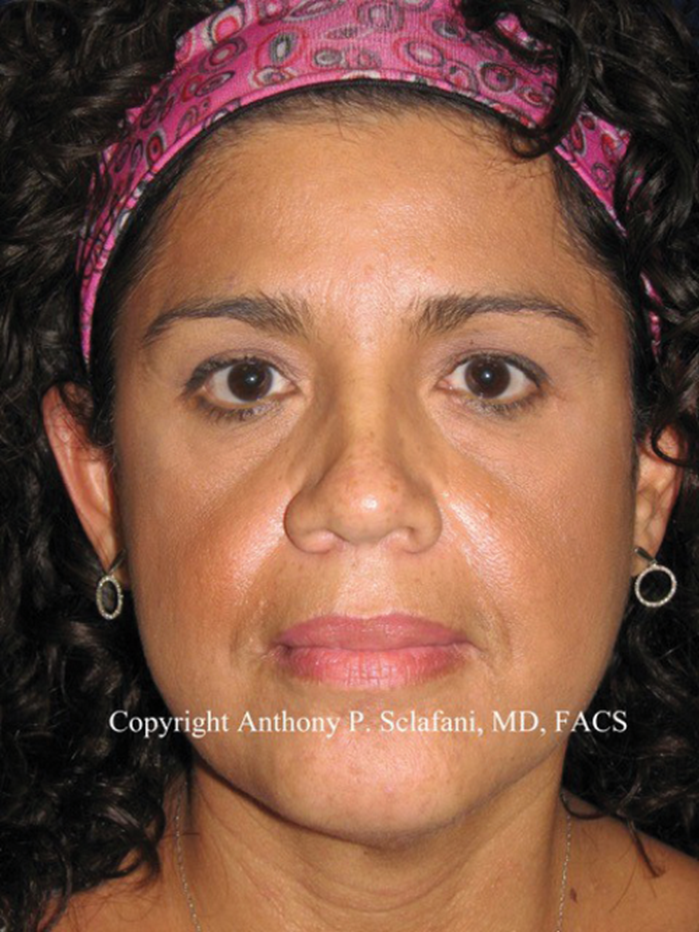 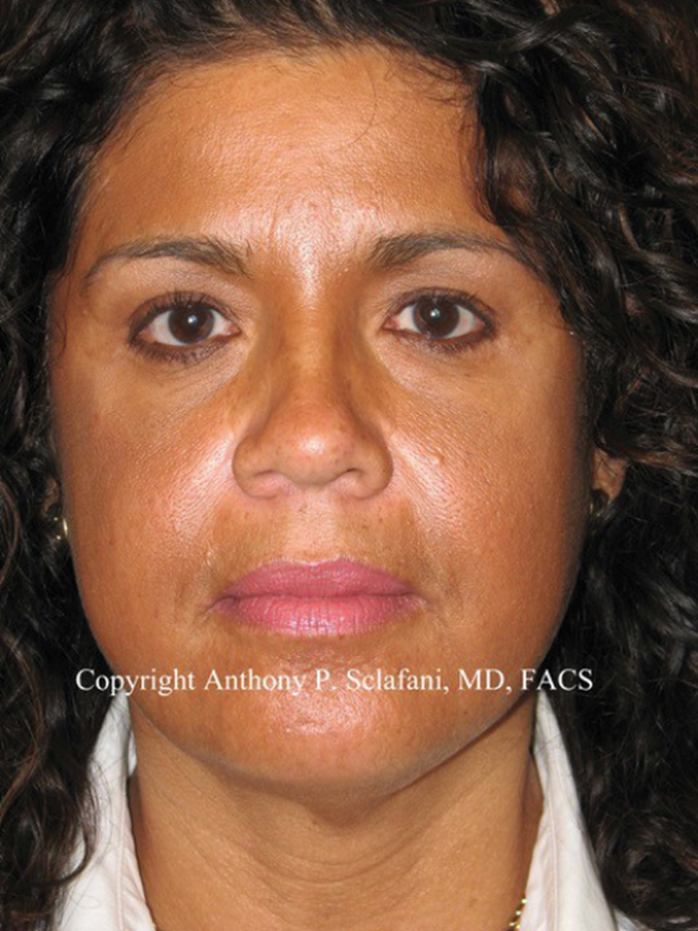 Figure 1. Patient (top) prior to and (bottom) after three periorbital and midfacial treatments with P-PRF (Selphyl, Aesthetic Factors, Wayne, NJ).

Limitations and conclusions of this review

A PubMed search of “PRP” (related to platelet rich plasma) returned 7157 results, 3963 from the past 10 years. Of these, 591 were also associated with the terms “skin”, “aesthetic”, “fat” or “hair”. The vast majority of these were case reports, or reviews, with only 21 well-documented trials. Many papers report results using non-validated outcome measures. Most are underpowered, and may not adequately describe sometimes subtle and / or transient effects. Until recently, the exact type of platelet preparation was not specified. As significantly, there were 7822 pre-2007 PubMed hits for PRP and skin, aesthetic, fat or hair, and many of these offer little objective data to support clinical claims. Coupled with the 3.4 million Google hits for the same terms, physicians as well as patients are confronted with an avalanche of claims. However, the past 10 years has seen an increasingly detailed body of evidence supporting the use of platelet preparations in aesthetic applications. 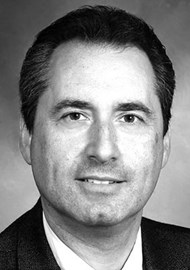