In part one of this series I outlined the evolution of my involvement in this most challenging of clinical conditions: the acute management of the victim of an acid assault. This evolution began with the awareness of the devastation wrought on biological tissues by chemicals as seen in the extravasation injury.

Extravasation segued to assault and in particular, hydrofluoric acid burns. Hydrofluoric acid is exceptional in its devasting effects principally due to the highly reactive fluoride ion. In the course of discussing the literature I raised a concern about ‘plagiarism’. It is a sensitive issue and could be regarded as a compliment. I was impressed by the way in which Peter Shakespeare, then Editor of the journal Burns managed my concerns with honesty and openness. From hydrofluoric acid I moved on to nitric acid and now in this second article the evolution continues with a move to Asia.

To provide background and justification I am drawing on a poster I prepared for the first World Congress of the World Association of Medical Editors (WAME) held in Delhi in 2015. This was prepared for a professional, but not necessarily clinical viewer, so there are some rather emotive terms used for which I make no apology.

Chemicals can transform the living into death and also into a living death. Accident, neglect or intention. It is this last which is most evil. Chemical burns of the skin cause scars. The worse the scar, the worse the outcome. As I have confronted the devastation of chemical assault burns, as I acknowledge our limitations and often failure in treatment, I have drawn on my scientific background and my passion for my patients to find a better way. 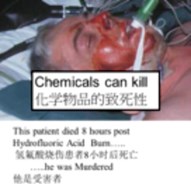 Traditional treatment has been lavage, copious lavage and then after several days, surgical excision of dead tissue and application of split thickness skin grafts. The enemy is scar, and in burns a special type of scar, the hypertrophic scar. This contracts, twists and deforms leaving skin no one will touch, eyes that cannot see and voices that cry in silent pain.

I was a research fellow in pathology at Harvard for three years at a time when the world was coming alive to the implication of the clinical observation of scarless healing in the human fetus. Scarring has fascinated and intrigued me since and in the world of cutaneous thermal burns many have come to appreciate that the severity of scarring is related to the timing of surgical treatment. The sooner the inflammatory response from dead tissue is interrupted and the wounds closed the less the stimulus to a cascade of events that play out over months, indeed years, after injury. How can we tell that tissue is dead, particularly when only part of the thickness of the skin is involved? Therein lies one of the skills of the burns surgeon and it is called tangential excision. It was a bold new move in burns surgery introduced in 1960 by a wonderful surgeon, Zora Janzekovic [1]. Very thin layers of skin are removed until viable tissue is reached as indicated by a change in dermal collagen colour and also by lacuna like bleeding from viable and functioning capillaries.

Tangential excision is a skill that requires practise, practise, practise. Handling the knife or razor requires the same sensitivity as a violinist handling their bow. There are three planes of movement and multiple degrees of pressure. Practise with fruit and veg, not patients.

I moved to Hong Kong in 1999 and was introduced to the Acid Survivors Foundation in Bangladesh by my ex-colleague Ron Hiles. Further charity work in the area revealed the true devastation of acid burns that had been treated with only lavage. We had acid assault burns in Hong Kong [2] and I began to look at the timing of surgery and the outcome in terms of scarring. Scarring can be measured in many different ways, but my approach has always been to look beyond the scar to see the effect of the scar on the life of the patient. So, as an indirect measure of scar I looked at the amount and magnitude of reconstructive surgery patients needed [3].

Going back to Zora and her work with thermal burns I questioned whether her highly skilled technique could be applied to chemical burns. Of note the majority of chemical assault burns involved hydrochloric or sulphuric acid. The dissociation and release of the hydrogen ion leads to a coagulative necrosis, the depth of which will be determined by the concentration of the acid. The depth of penetration can be difficult to assess by simple clinical observation and of course the acid load in the tissues will be a function of the depth of penetration. The question I pondered over was that, if tangential shaving was effective in thermal burns, what about chemical burns? 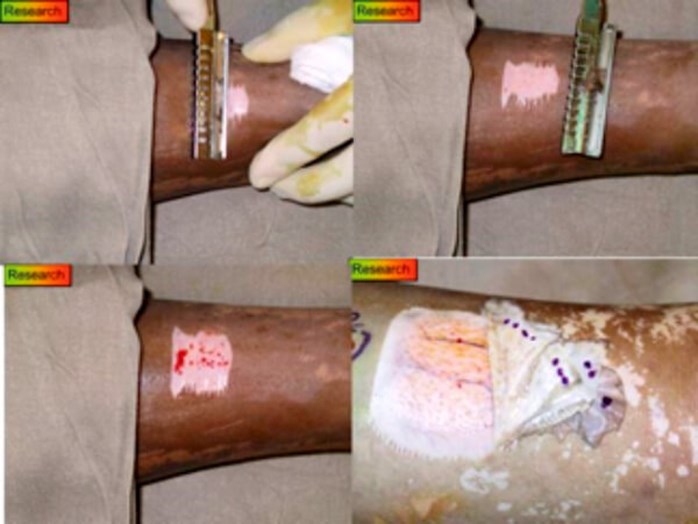 In this figure the astute observer will recognise the lacuna like bleeding in the bottom left whilst the bottom right comes from a different patient with a far deeper burn taking four separate shaves to get to the almond yellow deep reticular dermis.

So, there is a solid rational behind performing an examination under anaesthesia in selected cases and an urgent reduction in the acid load. The hypothesis to be tested is that the reduction in acid load will reduce the inflammatory response to the injury and result in less scarring. This hypothesis cannot ethically be tested by a ‘controlled’ clinical trial, but it can be tested by a clinical stratagem based on fundamental ethical principals and in particular, patient autonomy and primum non nocere (first do no harm).

A new treatment protocol was formulated and first described in 2005 [4]. Five years later I was able to publish the first results which I regarded as a true vindication of what was a logical, rational and ethical departure from conventional treatment [5].

This protocol as detailed below was stated in 2010 but also five years later in another paper [6]. In the conclusion of the case report the following comments were made:

“The benefits of urgent reduction of chemical load are intuitively obvious. Tangential shaving to lacuna-like or punctate bleeding optimally preserves viable and healthy tissues, whilst removing residual acid load . . . Trying to prove the benefit of urgent shaving in terms of an randomised control trial (RCT) would be ethically challenging. In the meantime, primum non nocere (first do no harm) requires urgent reduction of dermal acid load, as lavage is not enough.”

I should add that the treatment of such patients MUST be in specialised burns units / centres and tangential shaving, particularly of the face, needs to be performed by a specialist burns consultant.

“The question I pondered over was that, if tangential shaving was effective in thermal burns, what about chemical burns?”

I would love to finish this article here but there is a dark counterpoint which was another paper published in Burns in 2015 [7]. Which I felt was dishonest and unethical. The response of the Editor, Steven Wolf, was profoundly disappointing and a sharp contrast to that of Peter Shakespeare. I engaged the help and support of a professional medical writer to craft a detailed letter itemising 26 separate and significant concerns about aspects of this fundamentally flawed paper. I also posted a detailed post-publication review on PubPeer (https://pubpeer.com/publications/26514639461065BEBA64319936DA3D).

I would encourage burn surgeons to read the PubPeer comments. You see the paper from Tan and Wong was from my unit; it used completely flawed metrics, false data, misquoted citations and drew conclusions that were not even supported by their own statistical analysis. Their bottom line was essentially ‘forget urgent surgery, carry on with lavage alone’. For multiple reasons I felt the paper should be retracted but after prolonged discussion Steven decided not to. Having treated many cases of acid attacks needing reconstruction and also seeing the results of our protocol over a prolonged period of follow-up I feel that the stated conclusions of this paper are potentially dangerous to a group of highly vulnerable patients.

Let me conclude by saying that I stand by my statement made in 2010, repeated in 2015 and again in 2019: “with severe chemical burns, primum non nocere, requires urgent surgical reduction of the dermal acid load, as lavage alone is not enough.”