Recent advances in mobile phone camera technology and app software design have allowed photos of patients and their wounds to be sent from any smartphone to a secure NHS database, which can then be accessed by the relevant clinician with a username and password on any NHS network (N3) computer.

Traditionally, the myriad of different NHS trust IT systems, obstructive local information governance policies and the expense of IT software and local server maintenance have limited the integration and use of such solutions within the NHS. The information governance approved method of delivering photos between NHS trusts is to summon a member of the medical illustration team, wait for them to arrive to take the photos with a trust camera, and then wait for them to upload the photos to the trust image system back at the medical illustration department (because trusts prevent USB and memory card insertion into computers). Once the photos are available on the system, the photos must then be downloaded and sent from an NHS.net email address to another NHS.net email address. The received images must then be flagged for deletion from the inbox or for proper storage once the patient’s investigation and treatment is complete.

These technical hurdles mean clinicians do not include images or the images are delayed by hours, which are highly impractical for an acute referral. In many cases, clinicians resort to taking photos with their own smartphones and sending them via encrypted but unregulated messaging apps such as WhatsApp. Indeed, smartphones are used heavily on an individual and daily basis among a variety of medical practitioners [1-5], in particular for photographic images [6,7]. This is partly possible because the technology of phone cameras is now as good as digital cameras [8]. However, one recent study found 91% of clinicians had patient photo or video files on their own mobile devices, 65% had at least one image with patient identifiable data, 83% had devices that automatically backed up these images to an online cloud and 4% failed to have any password protection to enter their device [9]. Furthermore, the images shared between clinicians via these messaging systems cannot form an official part of the patient’s medical record because they either would not acknowledge their existence or cannot easily add them to an NHS record.

“As healthcare leans towards greater ‘self-care’, the medical selfie is not going to be an uncommon feature.” 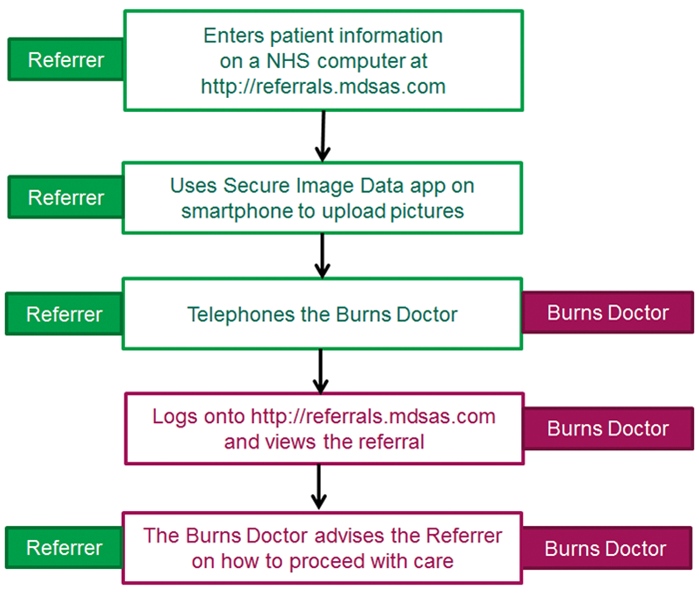 A new telereferral system [10] has overcome these issues by hosting data on a secure NHS cloud which allows access from any web-browser on a NHS computer. In brief (Figure 1), the referring clinician enters details of the referral into a webpage form on an N3 website. When the online referral is submitted, the website generates an encrypted QR code uniquely-linked to that referral. The referrer then launches a complementary app called Secure Image Data (SiD) on any iOS or Android mobile device and scans the QR code (Figure 2). This lets the app know which referral in the NHS server to send the photos to. The referrer obtains consent from the patient and then takes photos with the app, which encrypts, uploads and then deletes the image, which was temporarily stored in the phone devices RAM. The receiving clinician accesses the information after logging into the website. 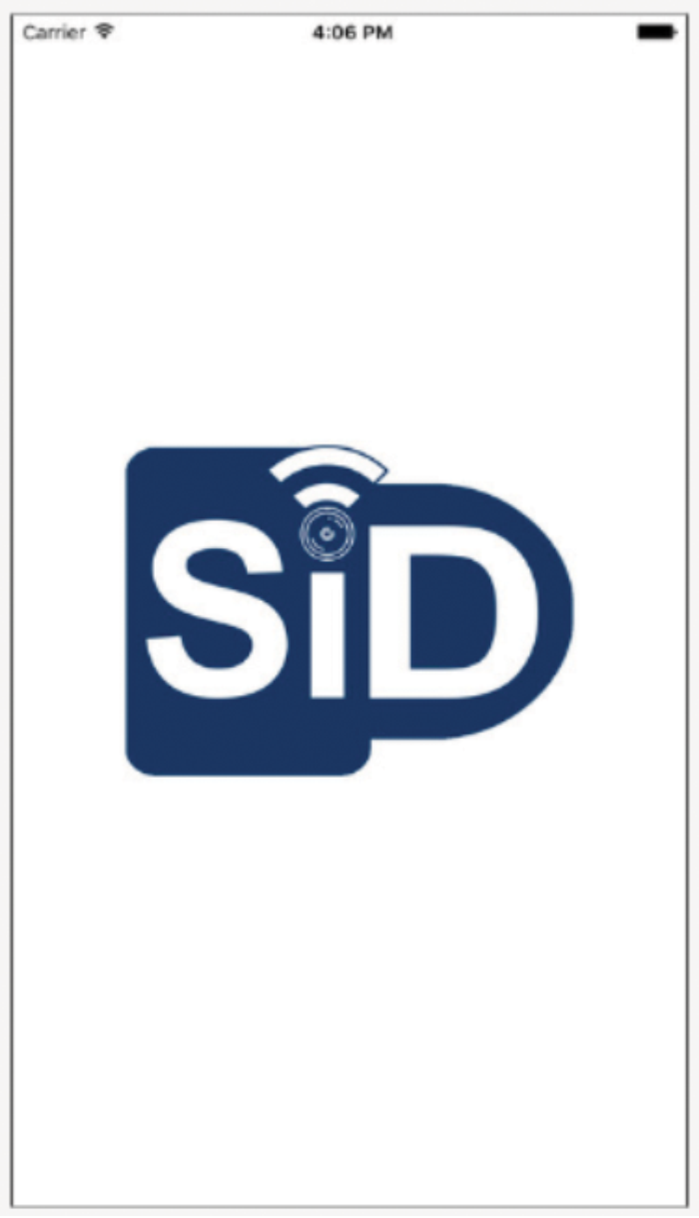 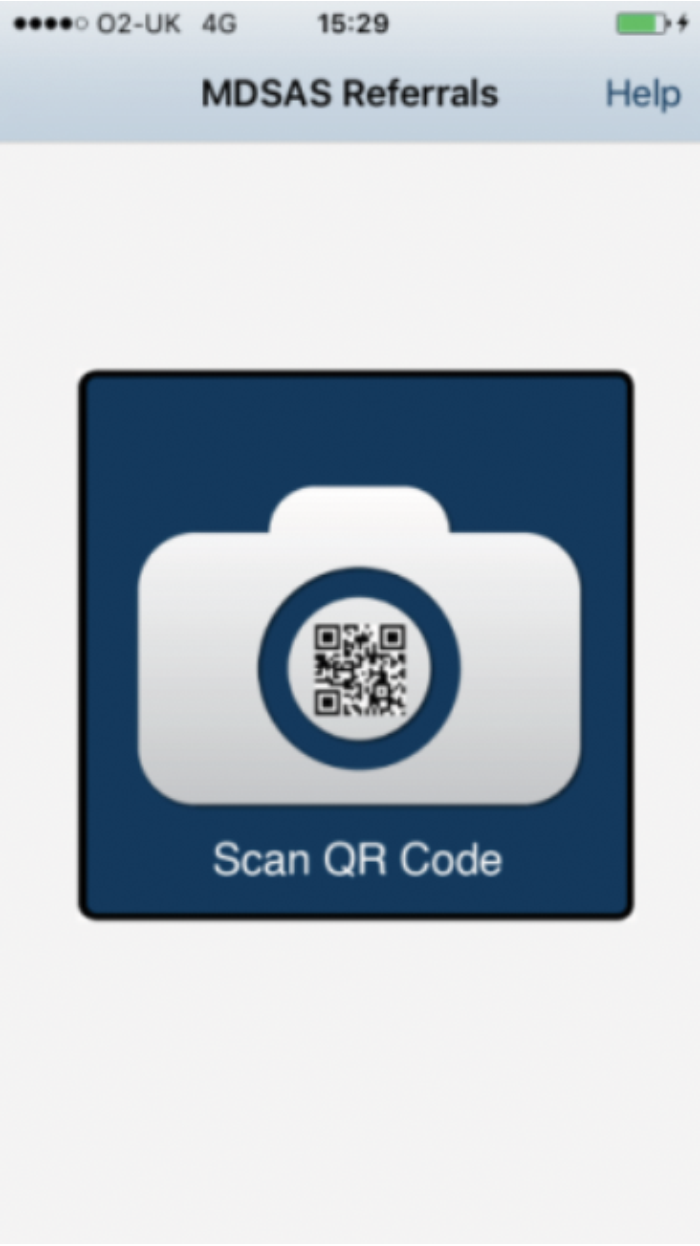 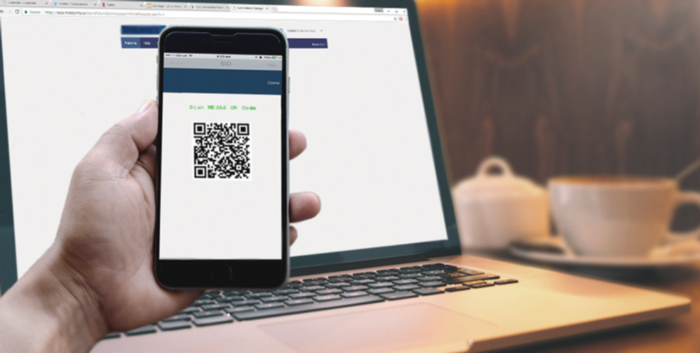 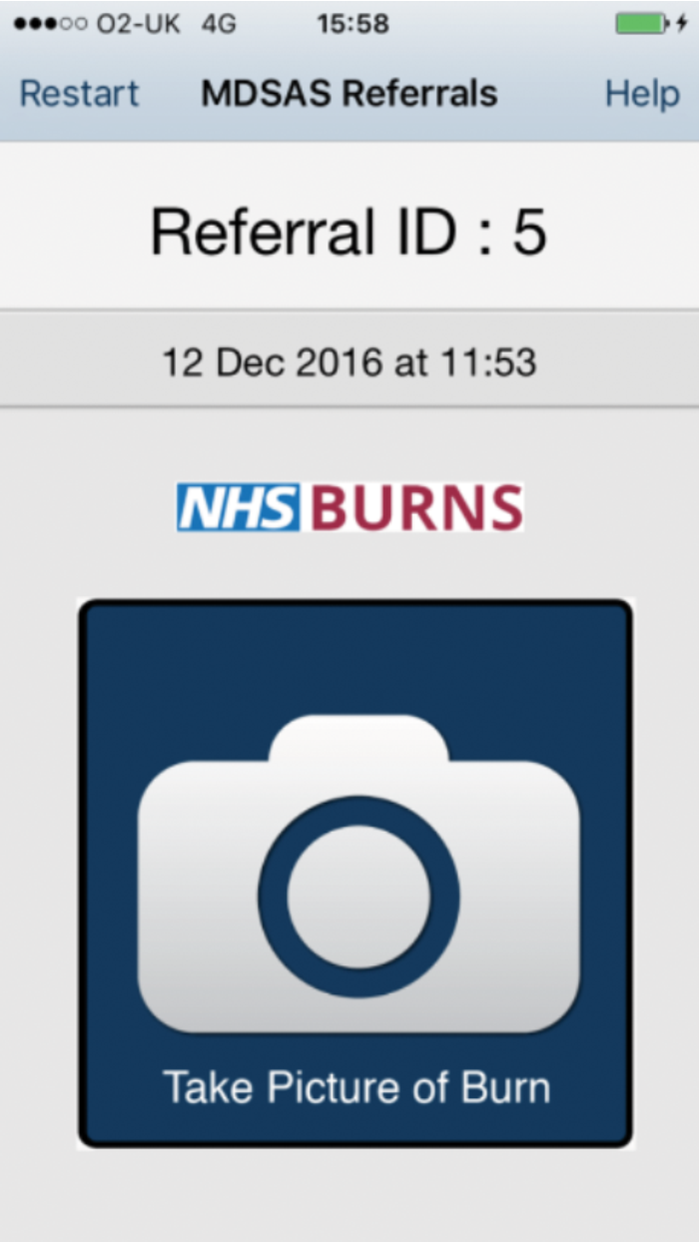 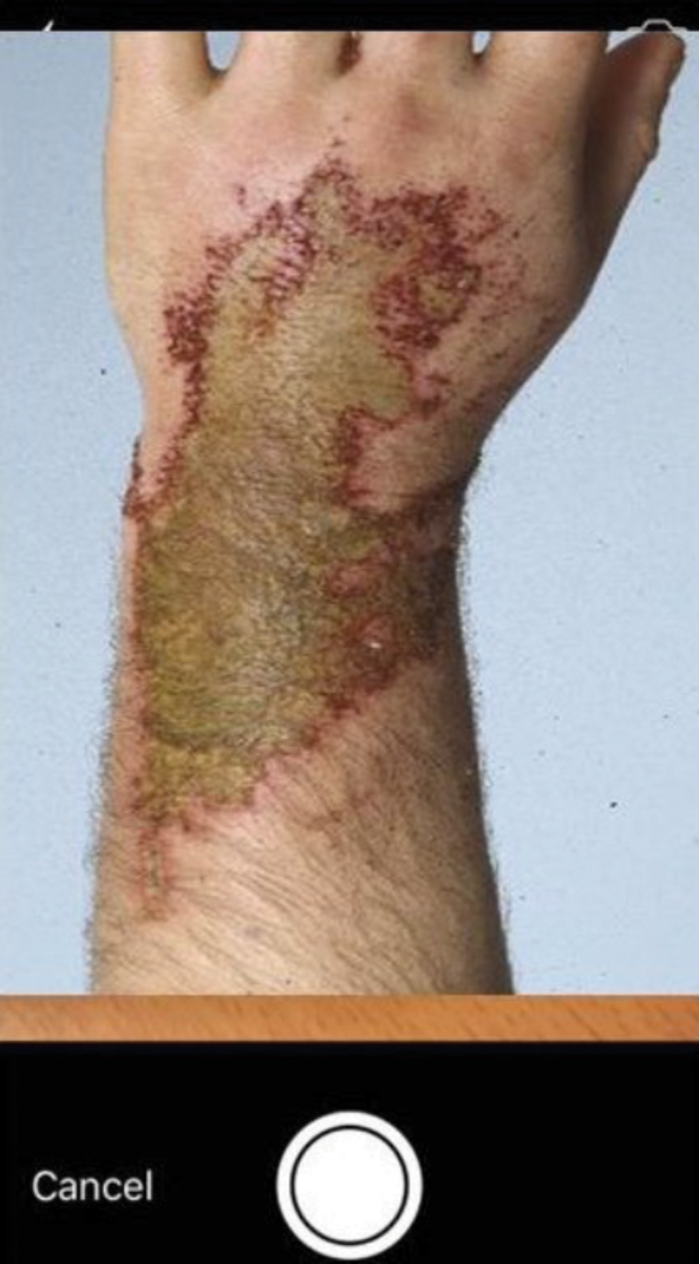 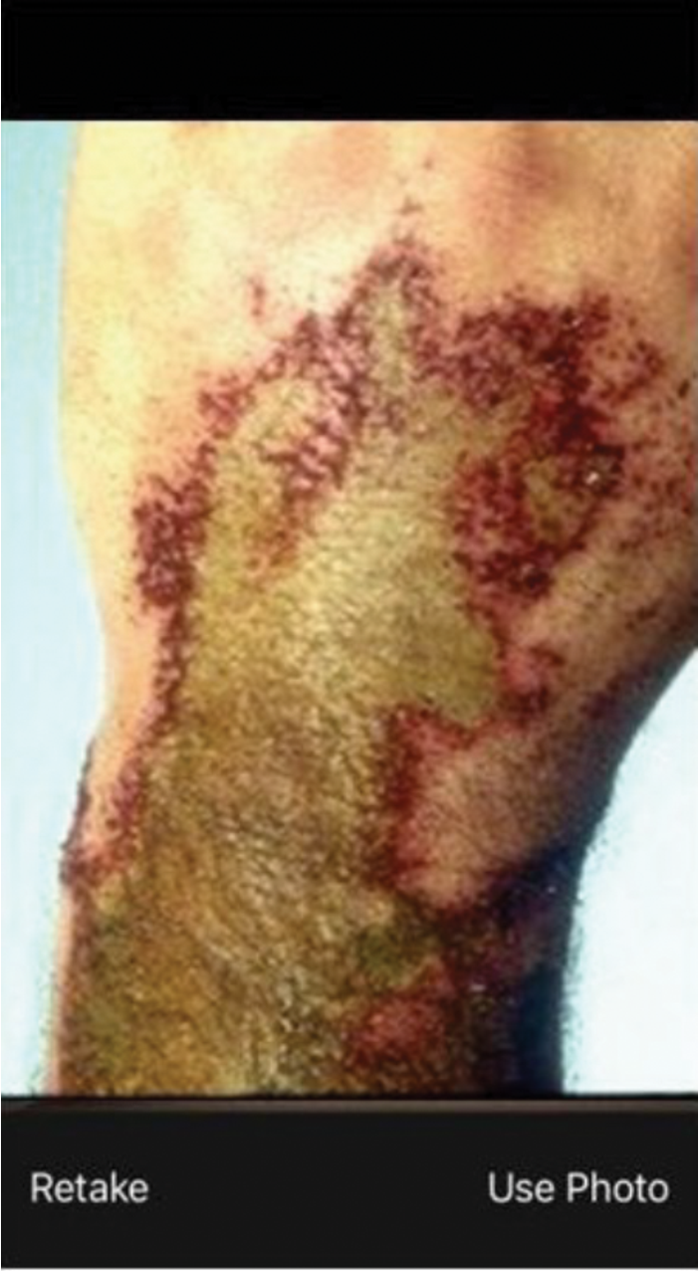 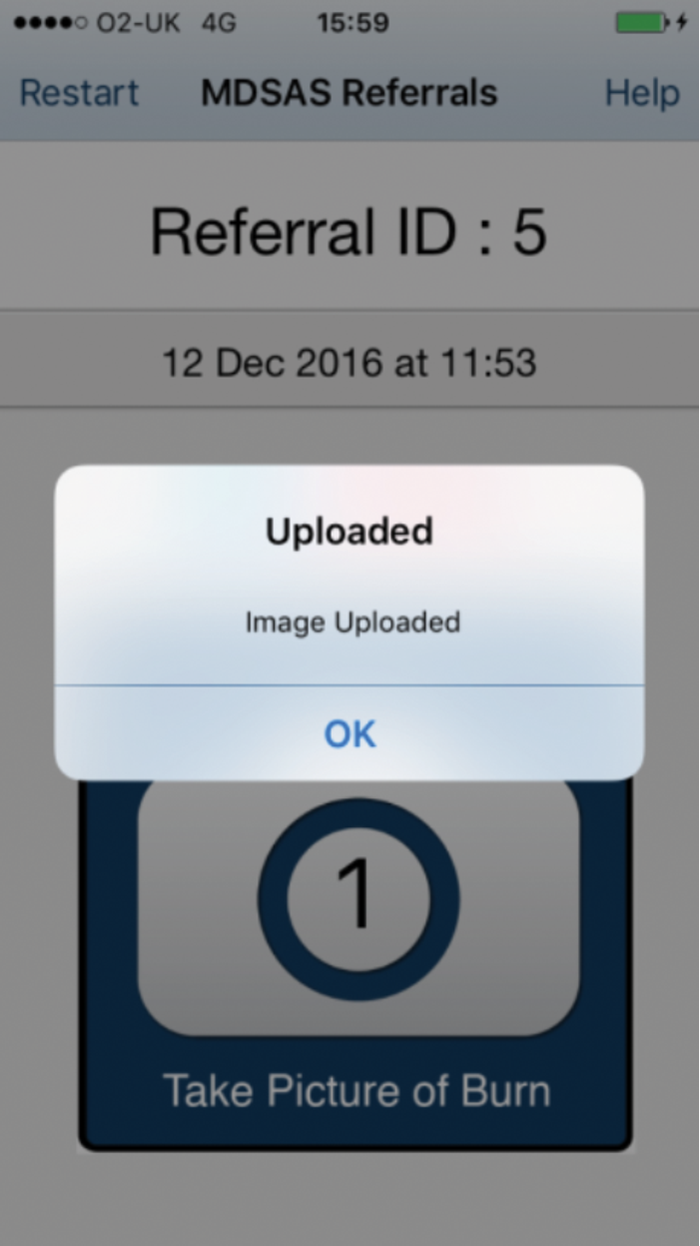 Figure 2: Screenshots of the SiD app in use.

Since May 2017, the traditional faxed referral to the burns services at the Manchester University NHS Foundation Trust has been replaced with this electronic web-based system. Hand-written, text-based information printed on fax paper is a potential clinical risk to patients, because they can often be illegible, which either delays or misleads the burns specialist during the decision-making process. Faxes can also be sent to the wrong number or misplaced, which poses a privacy risk and a breach in patient confidentiality. As described earlier, the main advantage is that the burns clinicians can now immediately view high-quality photographs of the injury or wound on a secure website on their computer.

Doctors at Manchester have found that referrals with photos of the injury have reduced the level of miscommunication with referring clinicians and have increased their confidence in making decisions on how to treat the patient. One outcome of this improved decision-making is the fall in number of patients that require immediate, short-term treatment (where the ward attendance is fewer than eight hours). Before the new referral system, the average number of ward attenders to the Manchester adults burns service for the month of June was 21 (2011-2016 data from the International Burn Injury Database). The inclusion of images along with their referral has reduced the number of ward attenders for June 2017 to seven. The lowest number previously recorded for June was 14 in 2011. Similar reductions were subsequently observed for July, August and September (Table 1). 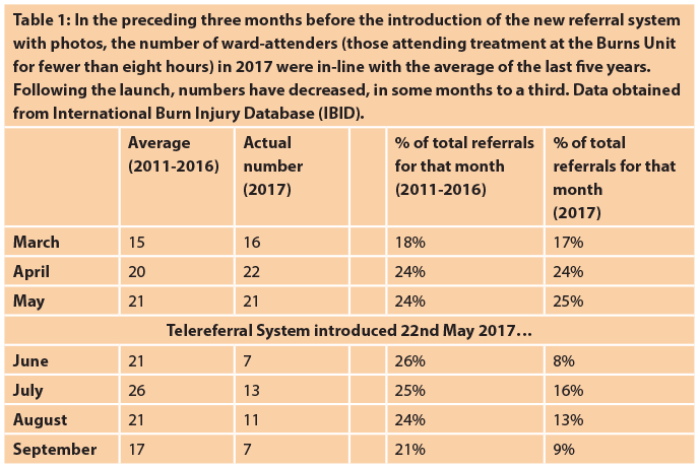 Traditionally, burns doctors would err on the side of caution and accept patients to the burns ward if a minor burn was described by the referrer as requiring urgent care. Photos of the wound are now providing an additional visual assessment, and the specialists are confident that debridement and dressing of the burn at the local emergency department (ED) is sufficient, and if needed, a check-up appointment at a later date with the burns outpatient / outreach team. This saves the NHS money by reducing the number of ambulance transfers and saves the patient time and stress of unnecessary travel.

A 60-year-old male was referred from a general hospital with a 99% total body surface area (TBSA) injury as a result of a gas oven explosion. He was fighting flames for 20 minutes. When the referral was received, all intensive care unit (ICU) and high dependency unit (HDU) beds at the burns service were full. If the referral had been made via a faxed proforma, the burns unit would have had to send him to another burn service. The photos included with the referral suggested the patient had 36% TBSA flame burns to arms, legs and abdomen, but all were superficial to mid-dermal. It was agreed that the patient could be safely admitted to the burns ward. The patient and his family were saved from having to travel considerable distances. Time, money and paperwork were saved by preventing unnecessary transfers between trusts.

A 39-year-old male was referred to the burns service with 6% TBSA burns to legs and foot, sustained after alcohol intoxication and falling asleep during a hot shower. His past medical history included alcohol-related depression. Due to the patient’s alcohol toxicity status, an agreement was made to debride his burn and start him on an alcohol withdrawal programme in the referring hospital. The referring site updated their initial referral daily with photos before and after dressing. Specialists assessed the quality of the debridement, gave feedback and monitored the injury. After four days and the completion of the alcohol withdrawal programme, the patient was transferred to the Manchester burns centre to complete his treatment. Here, telemedicine provides the clinician the confidence to be flexible and gives the opportunity to manage and treat patients remotely.

The main issue that arose when transitioning to a telereferral system was that faxing a proforma has been ingrained into the behaviour of referring staff. Referring staff were unaware of the new system, had not bookmarked the web address and were hesitant to send photos of patients via their mobile phone – a process strictly governed by many trusts. Indeed, the local information governance (IG) policies in two referring trusts prohibited staff in their EDs to use their own mobile phones to upload images with their telereferral. The trusts took eight to nine weeks to review and approve the system, and worked around their mobile phone policy by ordering dedicated trust iPads or mobile phones so staff did not have to use their own mobile phones.

The steps taken by these trusts were completely unnecessary because no patient information is ever on the mobile app and images are not stored on the phone. The delay in using the system fully was precisely the type of practice that the Caldicott Review (2013) [11] was trying to eliminate, where local trust IG policy should not be placed before patient interests: “If the patient consents to their information being shared including photos of their injury, especially as it forms a part of their assessment, investigation or treatment – then IG policy should not be prioritised.”

The review went as far as to introduce the seventh Caldicott Principle to overcome obstructive local IG policies: “The duty to share information can be as important as the duty to protect patient confidentiality.” Meanwhile, the GMC guidelines in the visual and audio recordings of patients (2011) [12] include the use of mobile phones to take photos, with the criteria that: “The patient must understand and give their consent, and the clinician must justify and explain the necessity for the use and storage of the photos to the patient.”

The telereferral system and SiD are now being piloted in specialties where visual inspection forms an important part of the diagnosis, e.g. plastics trauma and dermatology. Early indications suggest trauma coordinators are now able to allocate and prepare surgery lists more effectively, while dermatologists are now able to visually assess photographs of skin conditions that accompany the traditional text information from GP referrals. Early data from this pilot suggests that response times for referrals have been reduced from seven to ten days to about four hours.

Beyond improving the referral of patients between departments, another area where SiD has potential application is remote patient monitoring. Community carers and patients in residential or home based care can now add images of ongoing treatment issues, such as bed sores, allowing clinicians to continue to be able to offer advice and further treatment options on an ongoing basis. This would be most useful in situations following routine elective plastic surgery, where flaps and tissues all require regular monitoring and assessment. Postoperative care can be both time-consuming and expensive especially when consultant input is expected at every assessment. SiD potentially provides an easy and secure solution for the clinician to assess the patient at will, so that complications or side-effects during recovery or rehabilitation can be immediately identified without the patient having to wait until the next appointment and / or being physically present with a doctor. Patients could be sent home with the app and their unique QR code on a paper printout, and instructed to take a photograph of their condition at fixed time slots. The images are immediately added to the NHS database, and can be accessed and assessed by clinicians involved in their care.

“Community carers and patients in residential or home based care can now add images of ongoing treatment issues, such as bed sores, allowing clinicians to continue to be able to offer advice guidance.”

Indeed, GPs are already receiving medical data from patients via EMIS Health Care apps. In light of the trend for patients to contribute towards their own medical record and as healthcare leans towards greater ‘self-care’, the medical selfie [13] is not going to be an uncommon feature. Finally, the research and education potential of recording regular images of an injury or condition during treatment and recovery would also be invaluable to academic professionals.

The SiD app and its simple web-based system allows NHS professionals to effectively triage patients, but its main advantage is that it provides an easy and secure way to transfer images to an NHS system by anyone with a smartphone from any location. The NHS has been slow to adapt to the possibilities offered by new technology and to take advantage of the ubiquitous ownership of smartphones. With the ever-increasing demand to contain budgets any advances that reduce the burden on the NHS should be fully utilised. 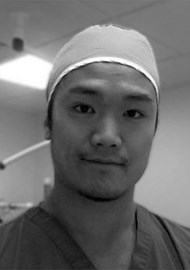 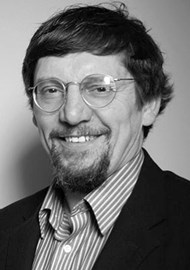