Edinburgh-based plastic surgeon Ewa Majdak-Paredes provides us with a comprehensive review of therapeutic mammoplasty, a multidisciplinary approach to breast-conserving surgery with an emphasis on oncological safety and good aesthetic outcomes.

Each year over 55,000 women in the UK will be diagnosed with breast cancer. As the main treatment remains surgical, over 80% of newly diagnosed patients will undergo either mastectomy (with or without breast reconstruction) or breast-conserving surgery (BCS) [1-3]. BCS (i.e. lumpectomy or wide local excision – WLE) involves resecting all invasive and in situ disease situated within the breast parenchyma and a margin of healthy breast tissue from around the tumour bed to optimise the chances of complete excision. BCS is now a well-established treatment option for breast cancer, being as effective as mastectomy in terms of long-term survival [3-5]. Thus, nearly 60% of women with breast cancer would tend to opt for BCS rather than mastectomy [2].

However, studies have shown that when 10-20% of breast tissue has been removed (naturally depending on the position of the tumour in the breast) the cosmetic result might be unsatisfactory due to either a resultant deformity within the breast parenchyma affecting the shape of the breast and / or nipple symmetry or subsequent size asymmetry when the contralateral breast remains larger than the cancer side after WLE.

Evidence seems to suggest that suboptimal cosmetic results after BCS can be associated with poor psychological adjustment once breast cancer treatment is completed [3,6,7]. Understandably, patients become much more aware or focus more on the cosmetic appearance once they recover from breast cancer treatment and might therefore seek a plastic surgery opinion. But, in order to improve the size, shape or nipple symmetry in those patients, secondary procedures under general anaesthetic would be required, which is not always convenient for patients. Nonetheless, in certain cases despite commitment and effort even multiple secondary procedures might fail to improve symmetry of the breast to a desired level.

Evolution of a multidisciplinary approach to BCS

Thus, in order not to compromise cosmetic results at the time of wide local excision, particularly in patients who would otherwise have had a poor cosmetic result, breast and plastic surgeons began to collaborate in developing a multidisciplinary oncoplastic approach combining BCS with immediate gland reshaping. One of the examples of oncoplastic approaches is the technique of therapeutic mammaplasty. Therapeutic mammaplasty is often performed as a bilateral procedure and involves reshaping of the remaining breast parenchyma once WLE has been completed and immediate contralateral reduction in order to achieve symmetry at the time of cancer treatment.

This technique involves using the Wise pattern breast reduction approach (occasionally, vertical scar) to gain access to the breast tumour to perform wide local excision and also reshape the remaining gland at the same time. Whereas a traditional wide local excision is performed via a skin incision directly over the tumour. Due to the fact that in a traditional wide local excision one tends to take fairly conservative margins in order not to compromise the aesthetic appearance of the breast, it is therefore expected that 15-47% of patients would have had involved margins and subsequently require further re-excision [8-10].

For that reason, there might be a controversy surrounding the oncological safety of the therapeutic mammaplasty approach if WLE was performed in a traditional manner. Specifically, the fact that re-shaping of the breast parenchyma might potentially distort the orientation of the margins if further re-excision was required.

However, a few large studies have shown that in order to maximise the oncological safety of therapeutic mammaplasty (i.e. maximising the chances of achieving complete excision of breast cancer in the first operation to avoid re-excision) whilst, at the same time, achieving the best possible cosmetic result, the approach to a wide local excision should be slightly modified in comparison to traditional BCS [8,11-13].

Firstly, the breast tumour (or tumours in the case of multifocal disease) should be accurately marked using several US-guided wires preoperatively [8].

Secondly, intraoperative WLE specimen radiography should be performed to ensure the breast surgeon is happy with the margins of the excision specimen [8].

Thirdly, fairly generous cavity margins from around the tumour bed can be safely excised without affecting breast cosmesis either as being a part of reduction mammaplasty or due to the fact that specimen X-ray might suggest incomplete margins [8,11‑13]. It would therefore seem that modifying the approach to WLE by better visualisation of the tumour pre- and intraoperatively and taking more generous margins can achieve complete excision rates ranging from 94-97% in the first operation [8,12].

What is involved in bilateral therapeutic mammaplasty technique?

Essentially, in therapeutic mammaplasty the Wise pattern breast reduction approach is used for skin incisions. Wise pattern incisions provide access to the breast tumour which is subsequently excised via a wide local excision (with / without cavity margins) whilst at the same time the remaining breast parenchyma is being reshaped and the contralateral breast being reduced. In a bilateral approach, given the fact the contralateral breast is being reduced at the time of WLE, there is a scope to potentially take slightly more generous margins from around the tumour bed in order to increase the chances of complete excision during the first operation.

We tend to recommend that the WLE should extend from the subcutaneous plane to the pre-pectoral fascia in the sagittal plane to ensure clear margins at least in the antero-posterior plane [8,11]. Once the WLE is performed (with or without cavity margins) then the tumour bed should be appropriately marked with clips to orientate margins (also for adjuvant radiotherapy planning). Once the wide local excision has been completed, partial breast reconstruction with dermo-glandular flaps of the remaining breast parenchyma is being performed. 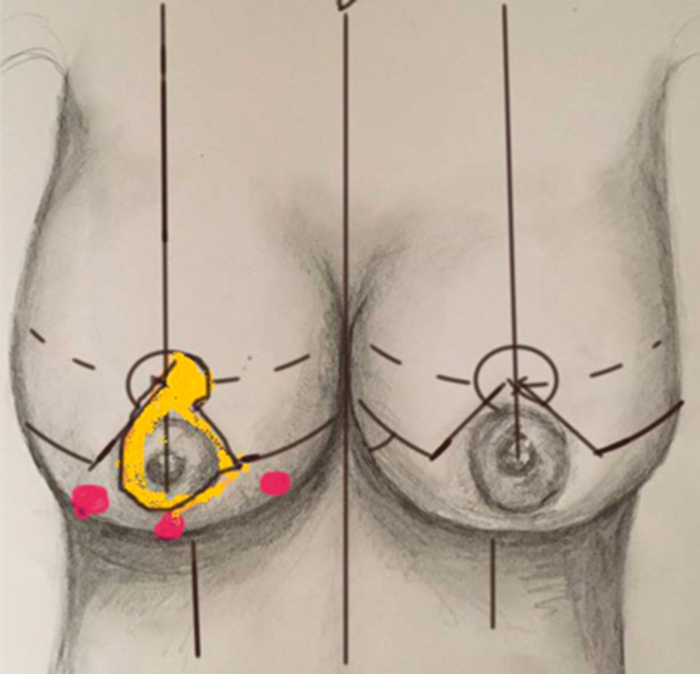 When a tumour is situated in the areas of the breast which would normally be removed with the Wise pattern reduction (Figure 1) then using a standard single pedicle to preserve the blood supply to the nipple-areola complex (NAC) would normally suffice (e.g. supero-medial, inferior, lateral, superior, medial). When the tumour is situated outside the areas of Wise pattern then one should expect there will be a defect which would need to be filled with a dermo-glandular flap. For that reason, breast reduction technique needs to be modified to use either a combination of a single pedicle (to keep blood supply to NAC) and a secondary pedicle (to act as a filler) or extended pedicle which provides both blood supply to NAC and a filler (Figure 2 and 3). 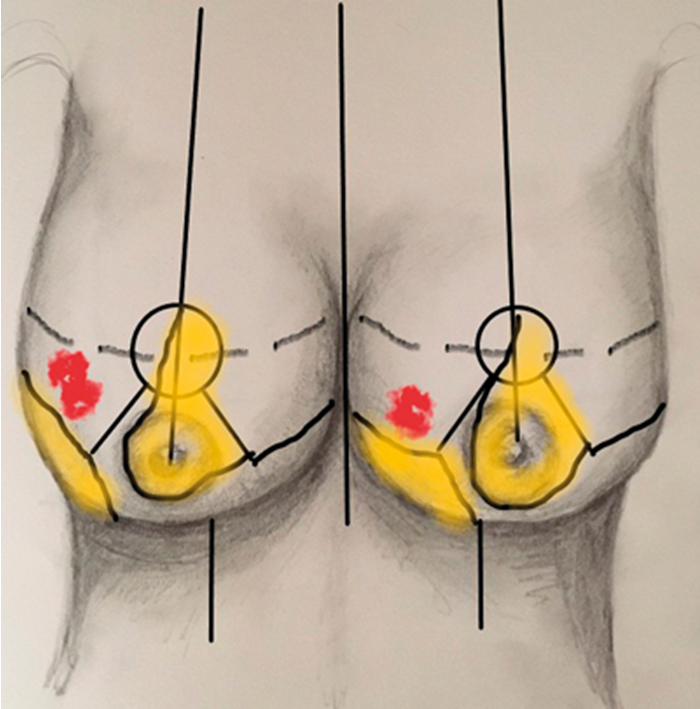 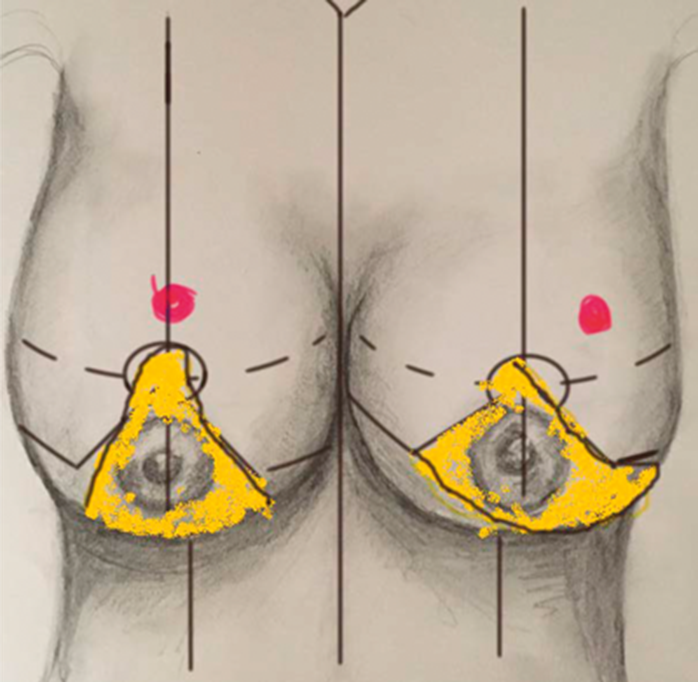 Occasionally, a free nipple graft might be required particularly when the breast cancer is situated behind the NAC (i.e. when cancer involves a potential pedicle which obviously needs to be excised with the WLE specimen).

As the procedure grows in popularity and continues to be refined the indications for its use continue to broaden [12]. Also, as the experience of multidisciplinary teams offering therapeutic mammaplasty has been steadily increasing, a few large studies clearly demonstrate outcomes at least equivalent to breast conservation alone, in terms of excision margins, complications, patient selection and surveillance [8,12,13]. Our indications for therapeutic mammaplasty include patients with ptosis who have breast cancer in any location in whom the anticipated cosmetic outcome following traditional WLE would be poor. Bilateral therapeutic mammaplasty can also be used in the case of a small breast cancer in patients with larger breasts who will benefit from reduction in order to reduce complications of adjuvant radiotherapy [8,12].

Large studies have shown that the complication rate associated with bilateral therapeutic mammaplasty is fairly low [8,12,13]. Particularly with regards to specific risks of bilateral therapeutic mammaplasty such as conversion to mastectomy, delay in getting adjuvant radiotherapy, fat necrosis which might potentially result in poor cosmetic outcome especially after radiotherapy or wound healing problems which might potentially delay adjuvant radiotherapy [8,11,13]. In addition, local recurrence rate also remains acceptable but undoubtedly more studies are needed to specifically assess local recurrence rate long-term (after 5 or 10 years of follow-up). Losken reported local recurrence rate of 5.2% after two years and 9% at five years [12,17].

Nonetheless, in order to allow patients to make well-informed choices when counselling patients for bilateral therapeutic mammaplasty, it would be prudent to discuss all pros and cons of this procedure, alternatives and all potential complications including specific risks associated with this procedure such as incomplete excision resulting in further surgery which might potentially compromise cosmetic result, conversion to mastectomy, delayed healing which might potentially delay adjuvant radiotherapy, fat necrosis, asymmetry due to radiotherapy, NAC necrosis or a possibility of conversion to free nipple graft at the time of surgery, delayed healing compromising getting radiotherapy on time, unpredictable scarring, etc.

Undoubtedly, therapeutic mammaplasty is becoming more popular amongst patients and surgeons as the experience of multidisciplinary teams is increasing and outcomes are getting better. It is important to mention that close collaboration between all members of experienced multidisciplinary teams offering therapeutic mammaplasty is essential to achieve oncological safety, clinical efficiency and good outcomes for patients. Inevitably, there is a learning curve not only for surgeons wanting to perform therapeutic mammaplasty but also for other members of multidisciplinary teams including clinical oncologists who need to have a good understanding about where the tumour bed is located in each individual patient in order to plan radiotherapy boost to the right area as glandular reshaping might have potentially displaced the clips which poses an additional risk that the tumour bed does not get the maximum dose of adjuvant radiotherapy.

With regards to patient reported satisfaction rate, the Nottingham study has demonstrated that oncoplastic BCS was associated with higher levels of patient satisfaction in comparison to mastectomy and immediate breast reconstruction particularly in large breasted patients [16].

In conclusion, bilateral therapeutic mammaplasty performed by experienced multidisciplinary teams is becoming more popular and has proven to be a successful treatment option in selected patients. However, more studies are required to demonstrate consistency of achieving good long-term outcomes at 5 or 10 years of follow-up. 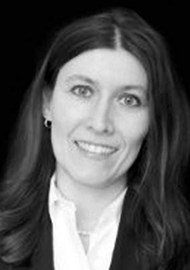