From liposuction to adipose stem cells; from regenerative medicine to tissue engineering; and a vision of the future.

With the evolution of superficial suction lipectomy in the 1990’s the need for skin resection became less common and the limits of skin retraction changed. A clear clinical cut-off does occur where superficial liposuction is not adequate and skin resection is mandatory [1] (Figure 1). 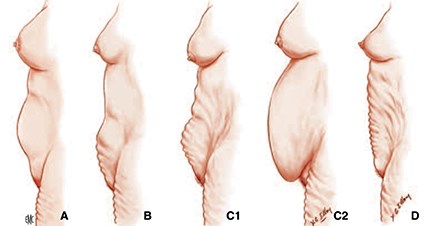 The first principle / consensus is that skin flaccidity that cannot be corrected with liposuction needs to be surgically removed. The second principle is that, depending on the amount of excess skin (infraumbilical, or infra and supraumbilical), the interplay of abdominoplasty and liposuction can vary widely [2-6]. When performed in a conservative and reasonable manner, this technique produces superb aesthetic outcomes and promotes the benefits of both techniques (Figures 1-7). The author emphasised the fact that a maxi-abdominoplasty with maximum undermining, combined with a maxi-adipoaspiration results in maximum risk of complications especially in the obese patient group. Up until 1992, surgeons would undermine 100% of the abdominal flap with inevitably high complication rates, mainly necrosis (Figure 2-4). However in that year the author published his experience of minimal undermining in a series of cases with excellent outcomes. 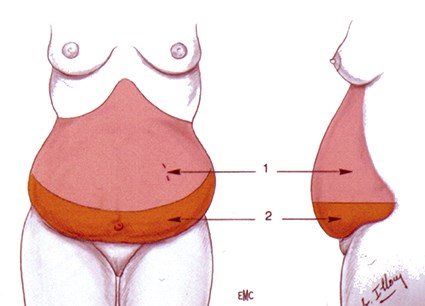 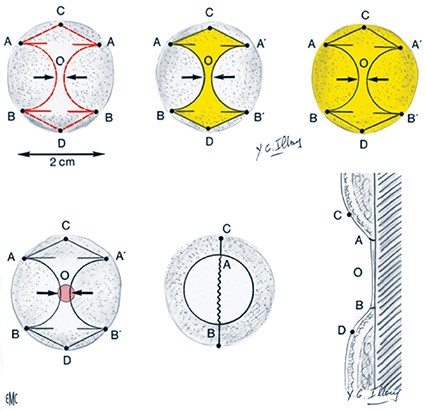 Figure 3: Illouz neo umbilicoplasty: two semicircular flaps are inverted and fixed to the deep plane. The design looks like the Chanel logo and Illouz called it ‘the Chanel umbilicus’. Illouz mathematic rules: the pubic triangle must be an isosceles triangle of 10cm, and the umbilicus must be in the middle of the xyphoid pubic line distance less 10%: minimum 10cm and maximum 13cm.

Figure 4: Result of an ‘Illouz bloc abdominoplasty’. This technique is suitable even for non fatty abdomen and gives an aesthetic and functional satisfactory result with a new vertical umbilicus in a good distance of the pubic area. Illouz law: the umbilicus must be minimum at 10cm and a maximum of 13cm from the pubic hair.

Saldanha et al. [8-10] established the term ‘lipoabdominoplasty’ and standardised a selective undermining corresponding to 30% of the traditional undermining, thus preserving the abdominal perforators. In the supraumbilical region the authors practised liposuction (wet technique) using a 3-4mm cannula and maintaining sufficient subdermal fat thickness to avoid vascular impairment. In the supraumbilical region, they start by undermining a median tunnel to preserve the lateral perforator vessels.

The abdominal wall has areas of variable resistance and sub-clinical abdominal hernias can sometimes be observed during abdominoplasty. They can be up to 1-2mm and usually localise in the supraumbilical median line, site of highest risk for perforation. This complication can occur, not only during aspiration, but also during the infiltration, for which finer and sharper cannulas are sometime utilised. To reduce the risk of perforation, the cannula tip has always to be accompanied by the palm, particularly in obese patients, in whom it is difficult to visualise the cannula, and the position should be hyperextension of the abdomen.

For the inner thighs deformity, the author described a new technique to avoid any recurrence, and the opening of the vulva by doing vertical scars fixed to the Colles ligament with a scar entirely hidden in the pubic hair allowing the string (the ‘Illouz string technique’) (Figure 5). When excess of skin is too important and needs a dermolipectomy, the author has designed a new rotation flap which can correct deformities of external and inner thighs at the same time (Figure 6 and 7). 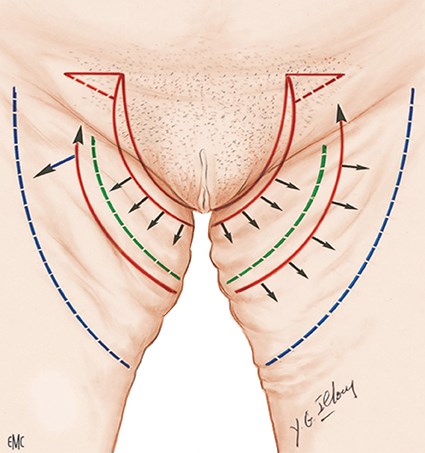 Figure 5: Scheme to visualise the Illouz inner thighplasty: suction of the inner thighs, vertical skin resection, rotation of the flap, fixation to the Colles ligament. Triangle plasty at the top to correct the skin excess. The entire scar is inside the pubic hair and in the string. Illouz called this the ‘string technique’. 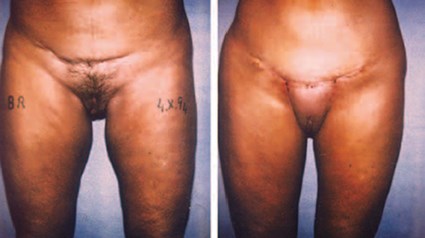 Figure 6: Result of an Illouz string technique for inner thighs:
the inner deformity and abdomen are completely corrected. 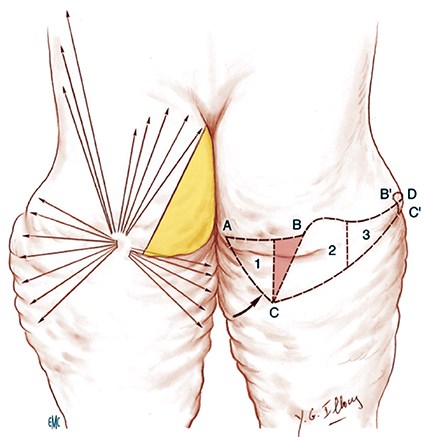 Figure 7: The Illouz rotation flap to correct excess of skin of inner and external thighs. The lazy S is done to equilibrate the length of the two sides of the incision with a rotation correcting the inner thigh.

In 1983, the author began grafting aspirated fat for correction of irregularities after liposuction [11] (Figure 8 and 9). There were many complications (Figure 10) but then we began to explore injection techniques and took the decision to go on with fat injection and to study how surviving fat cells were injected. 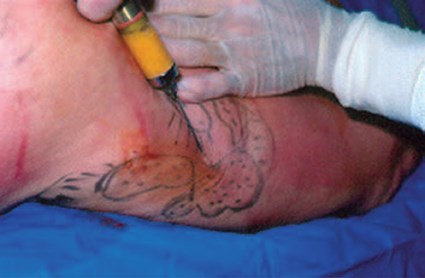 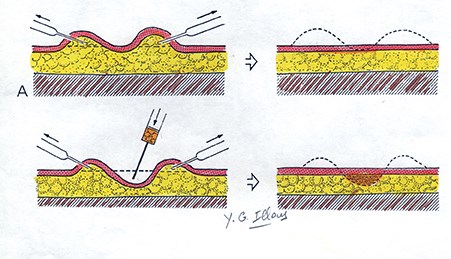 Figure 9: Scheme by Illouz to explain how to correct a real depression by fat injection. 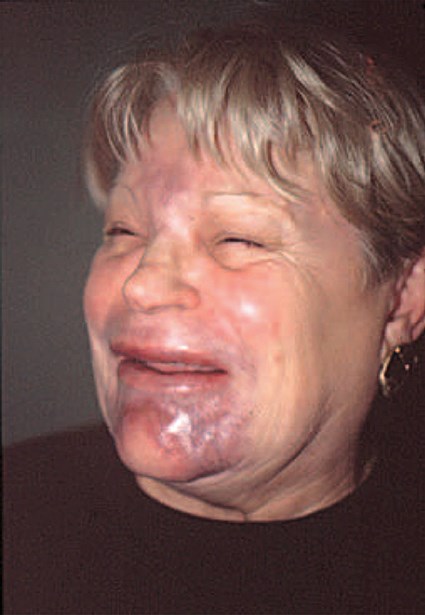 Since then, a wide variety of applications for fat grafting have developed including: gluteal contouring, breast augmentation, face rejuvenation, reconstructive surgery, Parry-Romberg syndrome (Figure 11), HIV lipodystrophy, etc [12-27]. In 1983, the author did the first fat injection in the breast with a stunning result lasting 30 years and with only 100ml in each breast (Figure 12). In the same year he started to do some face rejuvenation without a face lift by a combination of fat suction where fat is in excess, tunnelling to induce a skin retraction, fat injection where not enough volume, botox for the frontal wrinkles, TCA peeling, subconjunctival approach for inferior eyelid, and sometimes, partial resection of Bichat pad. The author called that kind of rejuvenation without a scar ‘the net face’ (Figure 13). 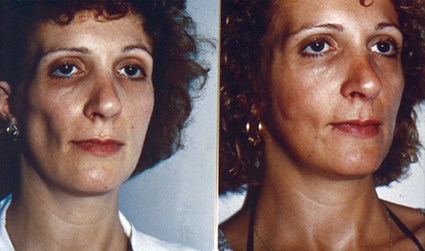 Figure 11: Romberg disease done by Illouz in 1984 and the result after five years. 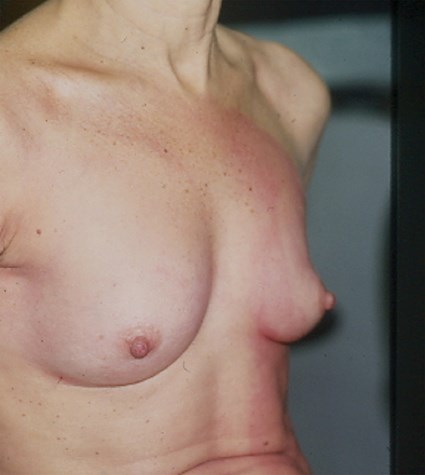 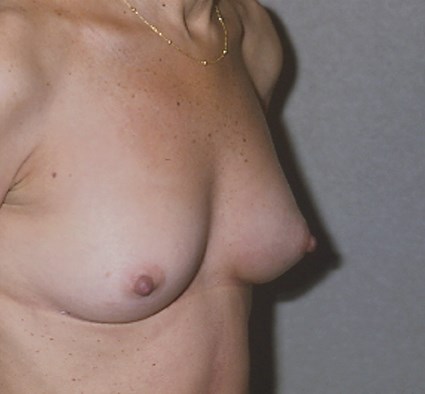 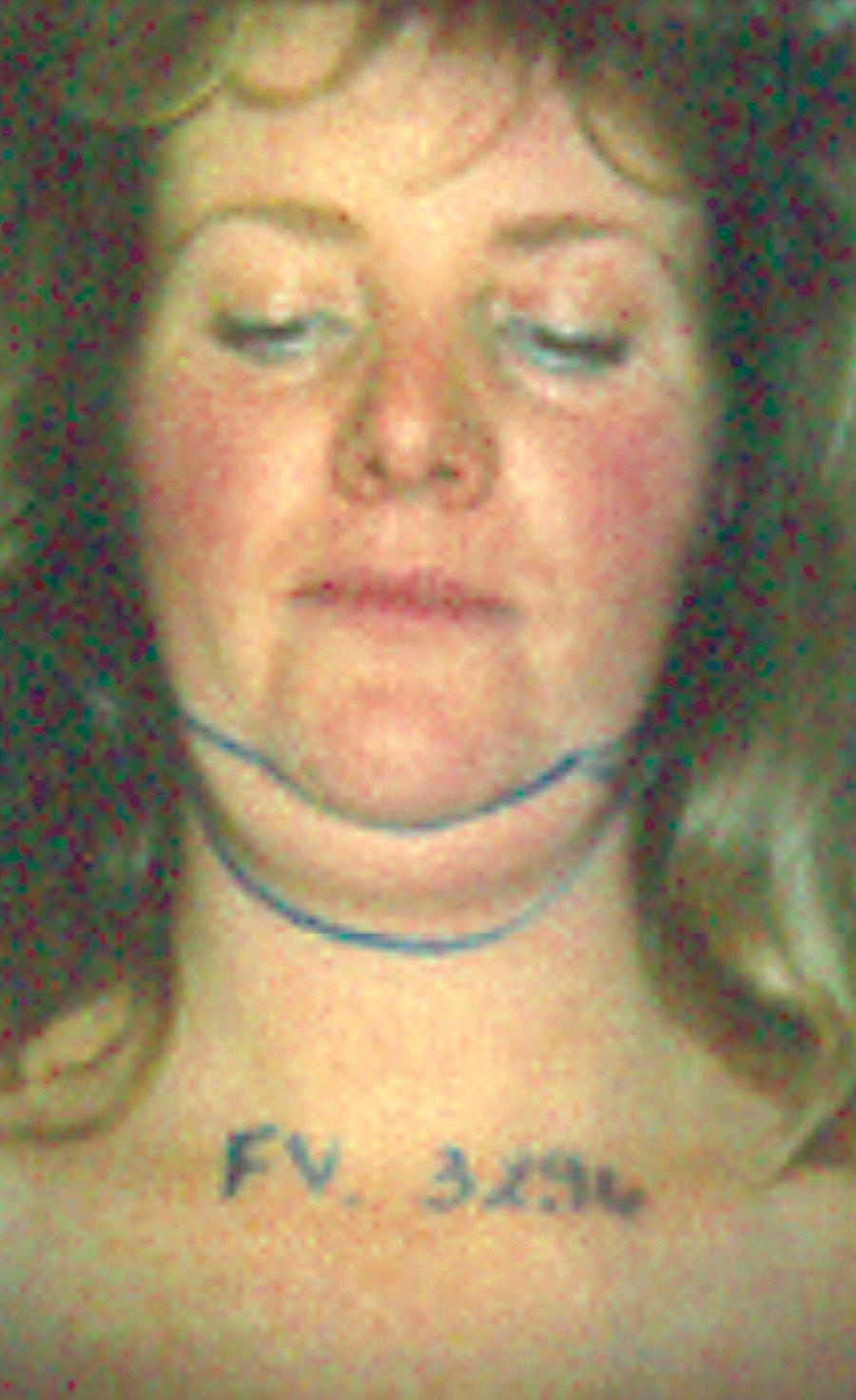 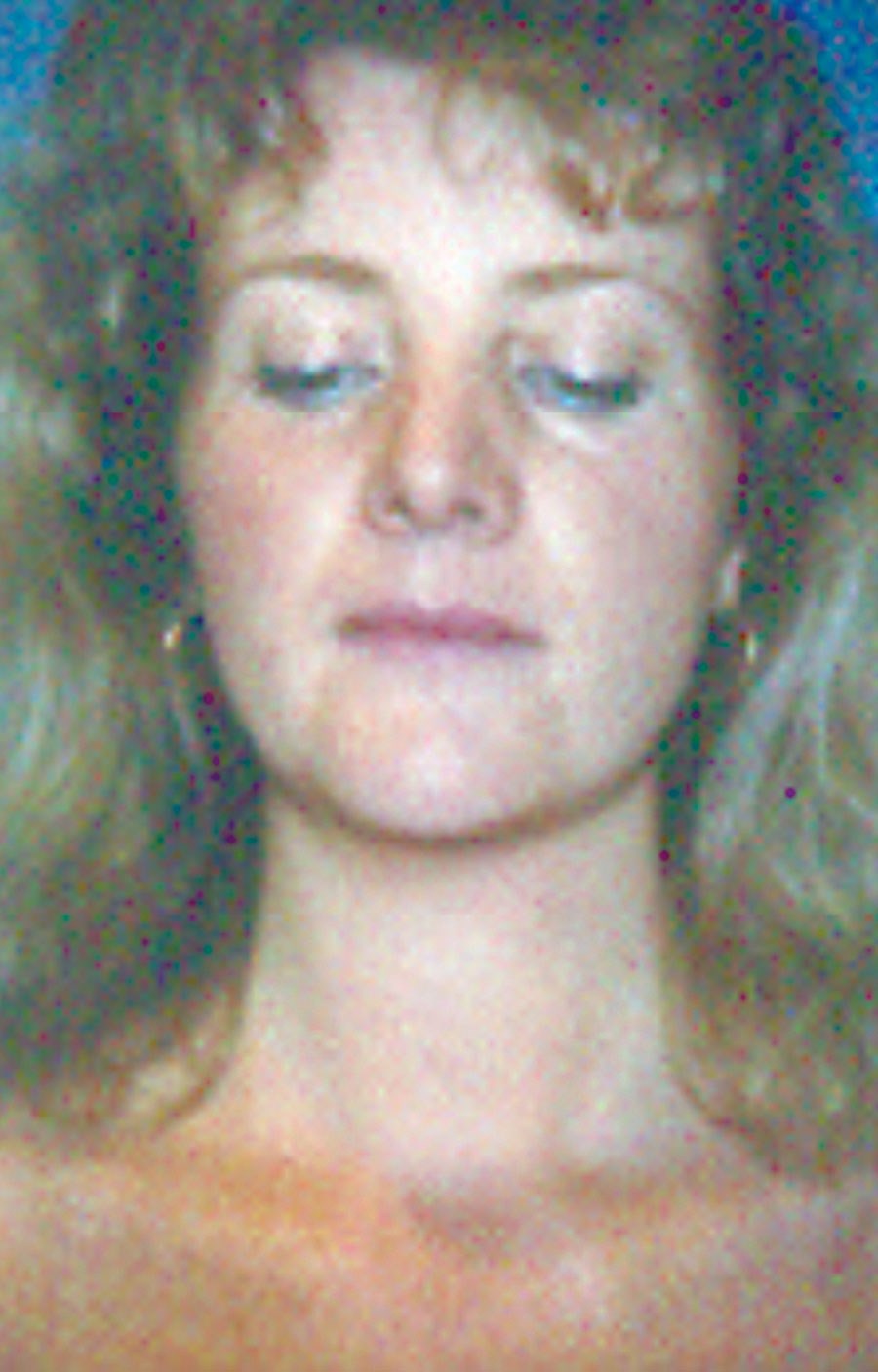 In 1996, Pereira et al. published their five-year experience with fat grafting in the gluteal and lower limb area (Figures 14 and 15) [28]. In 2009 Pereira and Sterodimas [12] introduced the composite body contouring, a technique which combined three procedures into one: liposuction of the back and thighs, along with lipografting of the buttocks and lipoabdominoplasty. They reported excellent patient satisfaction, and low complication rates. Interestingly, there was no flap and / or skin necrosis, a fact that confirms the safety and reproducibility of such a procedure. The authors report very high satisfaction rates, low volume of fat absorption (less than 20%) and very low complication rates (approximately 2%). In a different case series Pereira and Sterodimas [22] reported their experience with fat grafting and correction of banana fold deformity. They report very satisfactory results and no complications after the procedure. Fat can also be used to improve breast contour and / or increase breast volume. 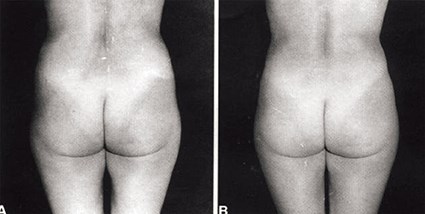 Figure 14: Fat suction of the hips and fat injection in the depression (Pereira). 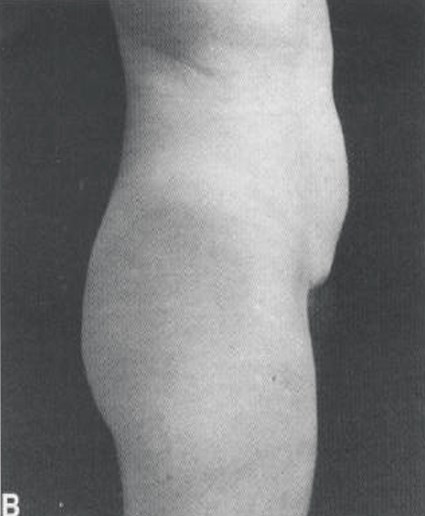 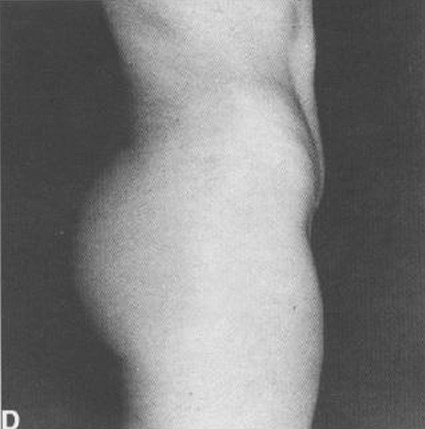 Figure 15: Fat suction of the abdomen and reinjection
of that fat in the buttocks (Pereira). 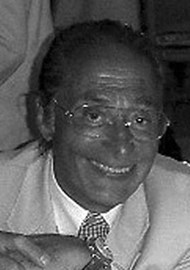