Wound healing, especially impending skin necrosis is a subject of great interest to surgical and dermatological medicine. While much of the physiology of wound healing is understood, gaps still exist in our understanding of the phenomenon, especially epithelial formation to prevent dermal scarring. The author describes how he modifies the wound milieu by using more novel means.

Within the past 15 years, facial soft-tissue augmentation with dermal filler products has become very popular. These products are considered safe, having mostly mild and transient adverse events but serious complications related to interrupted blood supply to eyes or the nose can occur with nasolabial fold dermal injection.

The exact mechanism of this event is unknown; however, it is widely accepted that vascular compromise is a function of embolisation and / or compression of material into the vasculature. Rare vascular complications with hyaluronic acid (HA) fillers may include either arterial embolus or venous compression during or after the event which results in reticulation some hours later that may lead to total skin necrosis within a few days. Some of these patients normally show no evidence of vascular compromise during injection and this has given rise to the ‘roundabout’ theory of aetiology [1].

The HELPIR technique was formulated for this very case. HELPIR is an acronym for:

The case in question involves a 34-year-old woman who received hyaluronic acid injections to the left nasolabial fold and marionette area. She had an uneventful procedure but reported back to the aesthetic clinic with a blue-black skin discolouration in the nasolabial and malar area on the second day. In view of the colour of the area she was told by a nurse that it was a bruise and for her to take some arnica.

When bullae and sloughing occurred on the fourth day, she went to her GP who mistakenly thought it was an infective process and started her on dual antibiotics. Her condition worsened over the weekend and she eventually presented to a hospital emergency room on the seventh day. Her area of compromise was cleansed, and she was referred to plastic outpatients the next day who provided no additional care. I was informed of the problem by a hospital doctor after nine days had already passed.

It was immediately obvious that some level of vascular compromise had occurred to the area mentioned with skin breakdown, demarcation, ulceration, and sloughing. I suspected this had occurred secondary to venous occlusion by the dermal filler rather than by the action of direct arterial embolism. My impression was formed because of the patient’s late presentation of signs (second or third day), the lack of pain during the period that the lesion was developing and no history of immediate blanching during the procedure. I had treated many similar cases and was aware that the golden period of recovery had already passed and there was a deficit of evidence of physicians who had returned necrotic skin back to full physiological and aesthetic function after such a prolonged period of symptoms. 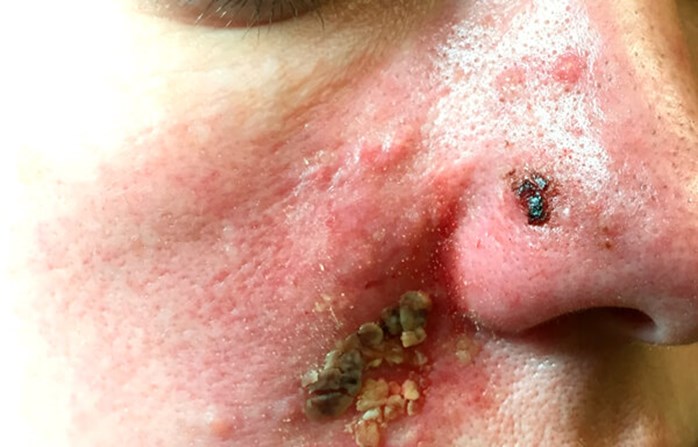 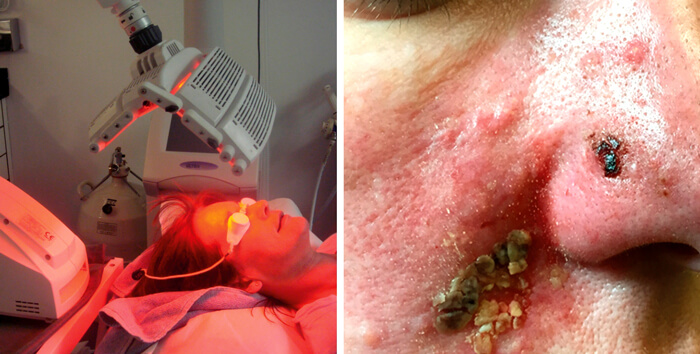 The patient was immediately treated with 750 units of Hyalase® (hyaluronidase) in a diluted solution of 2% lignocaine to both increase vasodilation and decrease the burning sensation of the enzyme. She was screened for any allergy to bees (hyaluronidase is present in bee sting) and commenced on oral nitrates (20mg Cialis (tadalafil)) to increase blood flow to the area by vasodilation. I prefer to use oral nitrates rather than nitropaste as it works for 48 hours (including overnight), whereas topical treatment needs to be applied hourly. The patient was given 100mg of cortisone IV and commenced on 4mg of dexamethasone PO because of the possibility of venous occlusion secondary to swelling and to reduce the inflammatory state caused by necrosis. She was left on her antibiotics to cover the possibility of infection and referred for daily hyperbaric oxygen therapy. We decided to start at 75% strength, later rising to maximum pressures in view of the fact her nose developed necrosis and the long period that had passed since her initial vascular compromise.

Platelet-rich plasma (PRP) can regenerate tissue regeneration and it is becoming a valuable adjunct to promote healing in many procedures in aesthetic medicine. PRP derives from the centrifugation of the patient’s own blood and it contains growth factors that influence wound healing, thereby playing an important role in tissue repairing mechanisms [2]. Platelets form a rich source of important growth factors, such as platelet-derived growth factor (PDGF), transforming growth factor-b (TGF-b) 1 and 2, and vascular endothelial growth factor (VEGF); all of these are involved in the angiogenic cascade which assists in hard and soft tissue wound healing [3]. I was aware that the repaired tissue would be quite vascular due to factor (VEGF) and that I would possibly have to treat this with a vascular laser later on in the healing process.

It is imperative to restore epithelium to the compromised area as quickly as possible or one will end up with a dermal scar. Low-level laser (light) therapy (LLLT) is a fast-growing technology used to treat a multitude of conditions that require stimulation of healing, relief of pain and inflammation, and restoration of function. The photons are absorbed by mitochondrial chromophores in skin cells. Consequently, electron transport, adenosine triphosphate (ATP) nitric oxide release, blood flow, reactive oxygen species increase and diverse signalling pathways get activated. Stem cells can be activated allowing increased tissue repair and healing [4]. We used an Omnilux 633 in the clinic and the patient was given a portable Genosys Omega light for home use.

Hyperbaric oxygen therapy (HBOT) increases the oxygen gradient between the centre and periphery of the wound, thus creating a strong angiogenic stimulus. This along with fibroblastic proliferation leads to increased neovascularisation. Hyperoxia in normal tissues causes vasoconstriction which reduces post-traumatic tissue oedema, contributing to the treatment of necrosis. This vasoconstriction, however, does not cause hypoxia as this is more than compensated by increased plasma oxygen content and microvascular blood flow [5]. HBOT increases the generation of oxygen free radicals, which oxidise proteins and membrane lipids, damage DNA and inhibit bacterial metabolic functions. Superoxide dismutase, catalase, glutathione and glutathione reductase keep the formation of these radicals in check until the oxygen load overwhelms the enzymes, leading to the detrimental effects on cell membranes, proteins and enzymes. HBOT is particularly effective against anaerobes which lack superoxide dismutase and facilitates the oxygen-dependent peroxidase system by which leukocytes kill bacteria [6].

Wound healing, especially impeding skin necrosis is a subject of great interest and involvement for the aesthetic industry. While much of the physiology of wound healing is understood, gaps still exist in our understanding of the phenomenon, especially epithelial formation to prevent dermal scarring, hence the physician attempts to modify the wound milieu by various means at his disposal. Hypoxia is a vital stimulant for angiogenesis, but development of adequate capillary network requires adequate amounts of tissue oxygen concentration.

Oxygen is vital for hydroxylation of lysine and proline residues during collagen synthesis and for cross-linking and maturation of collagen which is required for strong wound healing. Lack of oxygen is corrected during HBOT, leading to adequate amounts of mature collagen formation. Secondary mechanisms of action to provide epithelium include fibroblast proliferation and neocollagenesis by using low level laser light and growth factors from platelet rich plasma. This results in unwanted angiogenesis that has to be modified later by the use of intense pulsed light. 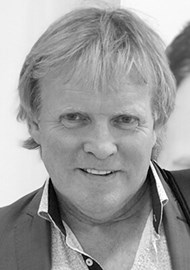