Gynaecomastia is a common condition that is said to affect 30-65% of men worldwide. Regardless of the severity of the condition, many men that are affected by their gynaecomastia, suffer considerable social embarrassment. The incidence appears to be increasing as requests for surgical correction grow in demand. The cause for this rise is unclear but may be influenced by social, fashion and media pressures for men to look more masculine.

As early as the seventh century when Paulis of Aegina first described surgical excision, men have presented requesting reduction of their gynaecomastia. Various excision techniques have been described over the decades, and more recently liposuction has gained popularity. The optimal form of surgery depends on the classification of gynaecomastia, with the outcome of surgical intervention to restore a normal adult male chest appearance. However, it is the author’s experience that often affected men prefer an adolescent appearance, such is their stigma attached to any form of breast swelling.

Gynaecomastia is best described as abnormal breast tissue enlargement in men. It is caused by an imbalance of the oestrogen / androgen ratio either during normal physiological changes such as at birth, puberty or in the seventh decade of life, or due to pathological conditions (see Table 1). However, the most common cause is idiopathic, accounting for 25% of all cases. 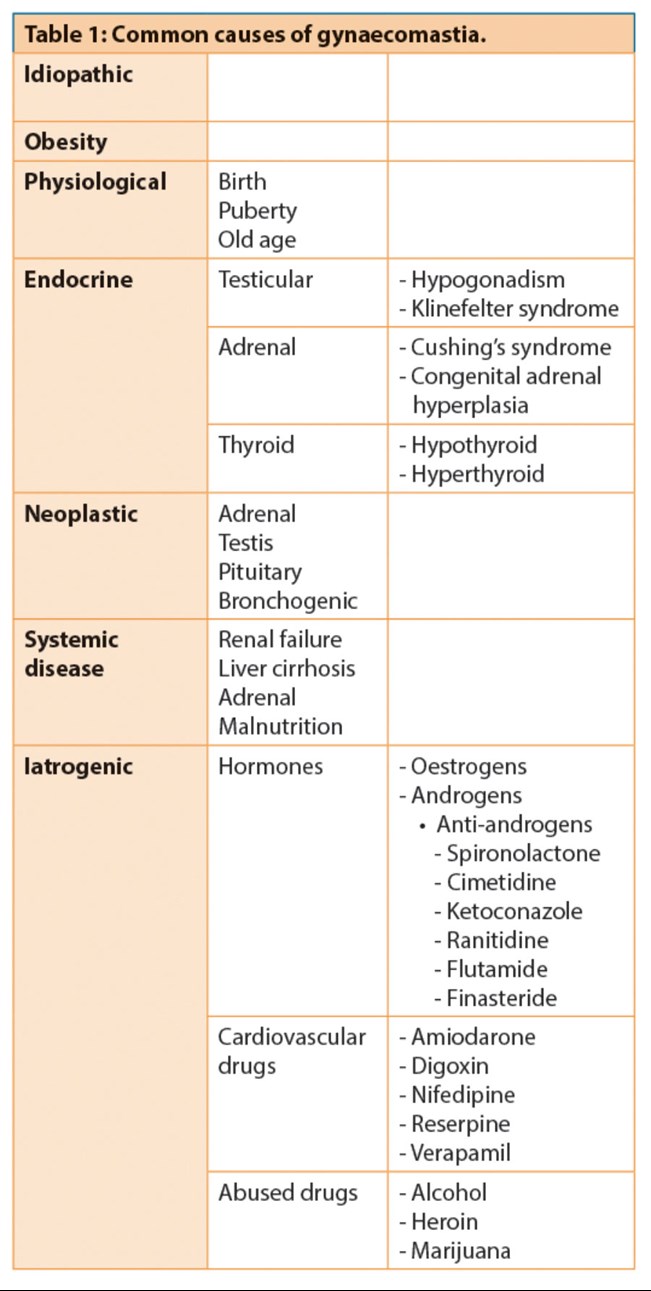 Several different classifications for gynaecomastia have been proposed: 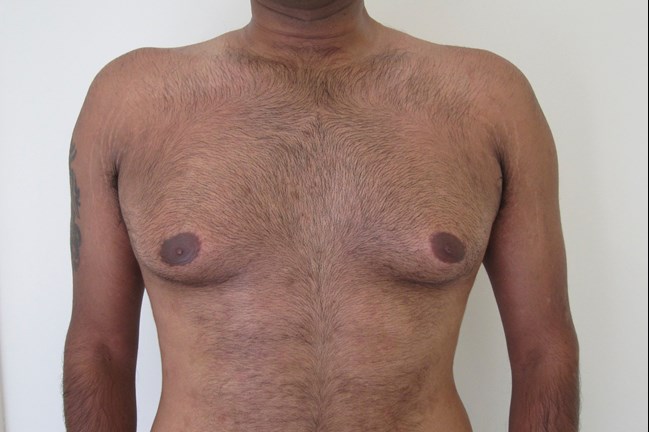 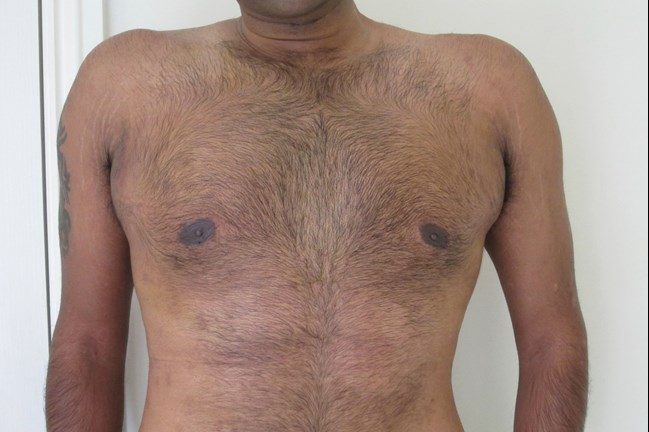 Figures 1-2: A typical case where VASER was successful without any glandular resection. Photos taken at eight weeks postoperative. 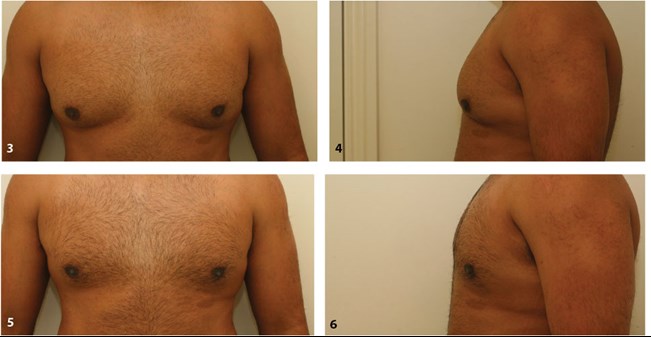 Figures 3-6: The patient was unhappy with his outcome despite there being a good clinical result and again, no glandular resection. Photos taken at eight weeks postoperative.

There have been relatively few publications on the psychological aspects of gynaecomastia in men, compared to the variety of surgical techniques. It is the psychological factors that cause men to request surgical treatment for a relatively benign condition. Therefore, it is important to understand these factors to help manage the patients and their expectations. Nuzzi et al. compared the physical and psychological differences between affected adolescents and healthy adult males, and identified that there was no difference in the severity of gynaecomastia and the psychological scores [5]. Moreover, they confirmed that there was a significant negative impact on psychological scores in adolescents with gynaecomastia. Wassersug et al. suggested that due to the embarrassment from their breast size, sufferers would refrain from otherwise beneficial exercise [6]. The associated loss of masculinity was the biggest contributing factor to their embarrassment. Recently, media attention has started to focus on male beauty and not just female perfection. This may have had a significant impact on men’s perception of their own bodies and may have led to a rise in fitness trainings. Certainly, male fashion uses slimmer fitting shirts and tops and for those that suffer with gynaecomastia, these items of clothing are impossible to wear, causing further social embarrassment. We identified that only 6% of men who had corrective surgery scheduled, had the confidence to go topless in front of their friends, clearly demonstrating social inhibition.

A common driving factor in men requesting surgery was that their embarrassment was inhibiting their swimming habits, and in particular when taking their own children swimming. Indeed 16% of patients would not go swimming without covering up with a t-shirt, when with their children. Oversized clothing was worn in 45% of patients in an attempt to hide their breasts. Social embarrassment in front of their partners was present in large numbers with 48% of men not able to go topless with their loved ones. Clearly these statistics demonstrate the severe impact gynaecomastia has on these men’s social lives. Routine dismissal in primary care compounds their lack of self-esteem and this practice must be discouraged with further advice on best management

In this study 36 men who were scheduled for elective gynaecomastia reduction surgery were asked to fill out a psychological questionnaire before their surgery. This was performed during their preoperative nurse assessment. The patients were selected consecutively and were from a single surgeon. The questionnaire was then repeated at the eighth week postoperative assessment. The final scores were then analysed.

All procedures were performed under conscious sedation. The VASER 2.0 (Sound Surgical Technologies, Denver) ultrasound assisted liposuction system was used in all procedures by a single surgeon. Prior to any infiltration, ultrasound assessment of each breast was performed using the Touchview (Terason) system to assess glandular tissue and adipose tissue thickness. Pinch thickness was also assessed centrally over the nipple. Tumescent technique using 1:1000 adrenaline, 10mls sodium bicarbonate, 400mg lidocaine were used per litre of 0.9% normal saline solution. The areas were infiltrated in the deep layers followed by the superficial layers. More volume was added to the central portion, as more energy would be placed there. A compression vest would need to be worn for three weeks 24/7 and three weeks 12/7 with an additional pressure pad added for the first week in the case of glandular removal to reduce the risk of haematoma formation in these higher risk cases.

Out of the 36 patient surveys started, 30 were completed in entirety. The results above can be summarised as follows in Table 2. Significant gains in self-confidence were demonstrated following gynaecomastia reduction with VASER. These results can be attributed to various factors including low scar visibility, good cosmetic appearance, minimal recovery and minimal complications, as well as good patient education at every step of the patient pathway. Patients could start to lead a ‘normal’ lifestyle on holidays, in the gym and at home without feeling self-conscious about the size of their breasts.

Raw numbers for each of the questions.

The successful treatment of gynaecomastia needs to consider the patient’s satisfaction as well as the surgeon’s. It is important to be mindful of the fact that due to the severity of the psychological impact of gynaecomastia, some sufferers will not be satisfied with a normal contoured chest, but would rather have a flat chest, more akin to an adolescent or pre-pubescent chest. Hence the need for identifying the patient’s expectations prior to agreeing any surgery and demonstrating the surgeon’s own results with numerous before and after photographs, preferably of examples in similar size and grade to the patient. Further studies are necessary with established psychological scoring such as the SF-36 Health Scores or the Hospital Anxiety and Depression (HAD) scores may be useful, but the author suggests developing a scale specific to gynaecomastia sufferers to help identify those at greatest need. These could then be applied to a management algorithm to determine which candidates may be suitable for funded corrective surgery.

This study analyses the early eight-week result and further longer term analysis would be helpful to ascertain if the improvement is continued further. It is possible that some of the patients with gynaecomastia may have other psychological issues such as body dysmorphic syndrome, however, in the majority of cases there are no such issues. The patient satisfaction showed that there were a minority of patients (20%) who did not achieve the goal of going bare chested post-surgery and this may be an indication of an underlying psychological issue that is not addressed by the surgical treatment.