I am appending this account to the previous article in order to illustrate how complex the reconstruction can be after an acid assault. Durjoy had acid poured into his mouth by his paternal aunt. It was a matter of inheritance. I first heard about Durjoy from Ron Hiles who had been a senior colleague of mine when I worked in Bristol, UK.

The incident happened in 2005 and Figure 1 shows Durjoy in Dacca Medical College Hospital; he is alive but literally starving to death. His anterior neck has been destroyed and the mouth merges into the sternum in a mass of dense scar. The first operation performed in Bangladesh involved removing the dense anterior neck scar and closing the defect with skin grafts. Enteral feeding was needed to improve Durjoy’s nutritional status. Figure 2 shows Durjoy in March of 2006. 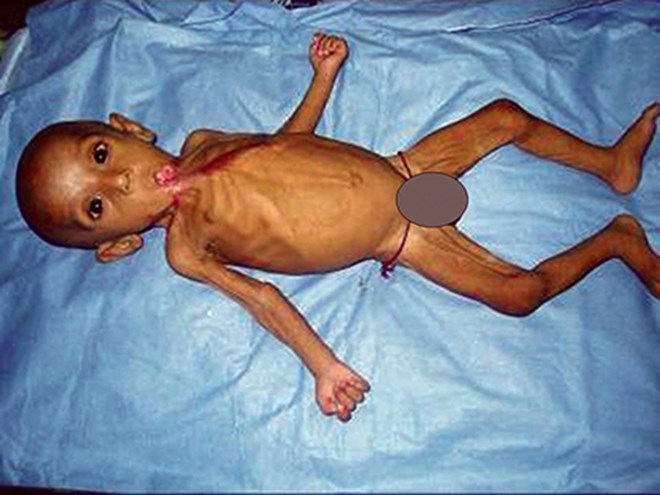 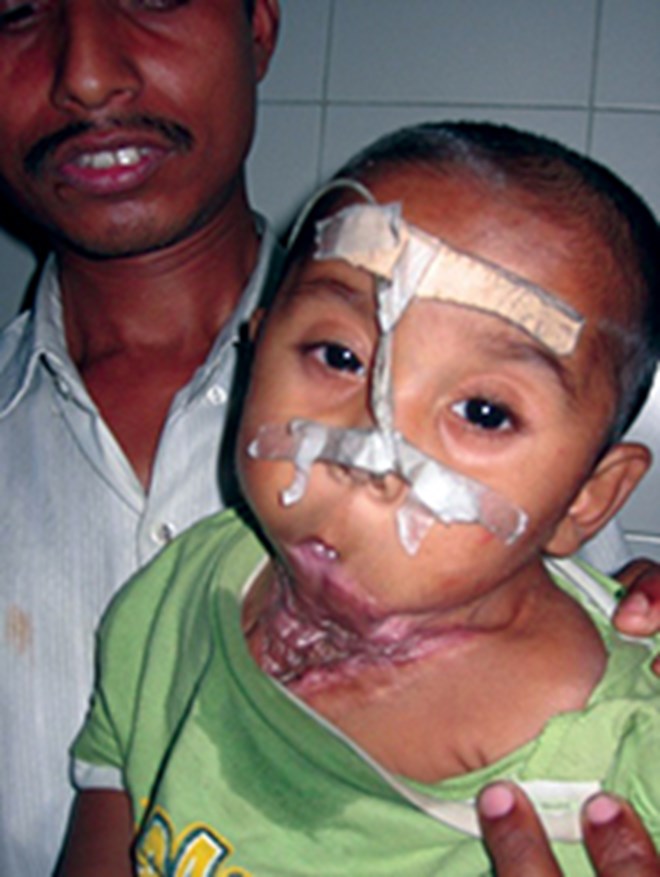 The dense intraoral scarring gave rise to problems with aspiration and so Durjoy needed a tracheostomy performed in April 2006. By August of 2006 he was putting on weight and beginning to walk but his future remained perilous (Figures 3 and 4). 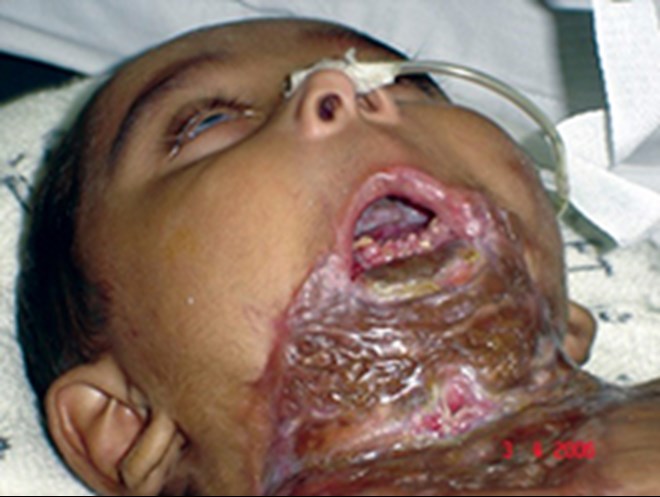 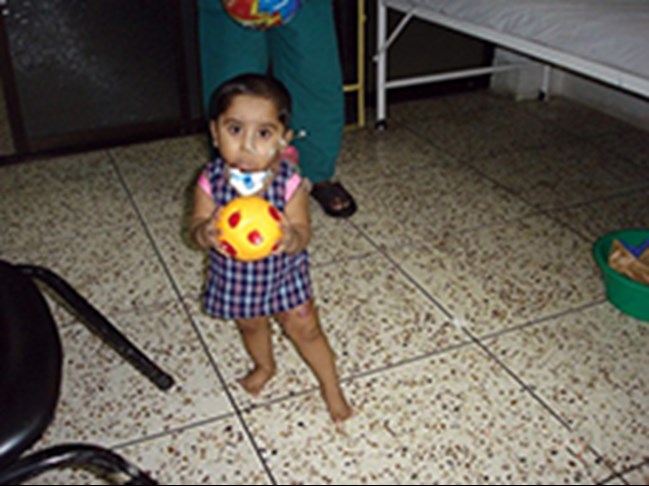 Meanwhile, in Hong Kong, we had been raising charitable donations to support Durjoy and his family to come to the Prince of Wales Hospital where we had established a multidisciplinary team to support the reconstruction of children with burns. Durjoy arrived in Hong Kong at the end of 2006 and figure 5 shows him with his mother and father together with three children from the Chinese Mainland who were undergoing reconstructive procedures. For both parents and patients Hong Kong was a very foreign place and it was good to have a few children at the same time so that they could give each other moral support. For Durjoy and his parents Hong Kong was even more different than anything they had encountered but we were very fortunate to have a doctor from Bangladesh working in the team. Kawser Ahmed had worked with the Acid Survivors Foundation in Dacca and can be seen standing next to Durjoy’s father on the left of the group in the picture. 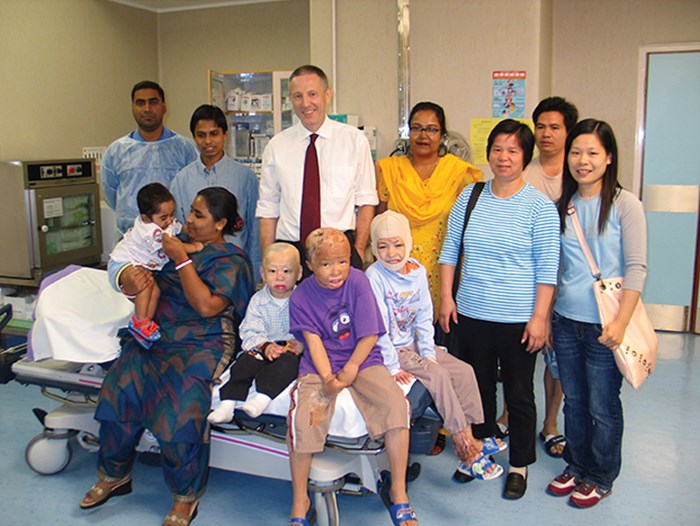 When Durjoy arrived in Hong Kong he had three main functional problems which were: difficulty in breathing with risk of aspiration necessitating a tracheostomy, inability to take liquid or solid food requiring permanent enteral feeding and inability to talk or vocalise due to intraoral scarring and tethering of his tongue. The first investigation he underwent was imaging to show the status of the oropharynx. This showed a grossly distorted oral cavity with eversion of the anterior alveolar margin and a very small connection between the oral cavity and the pharynx (Figure 6). 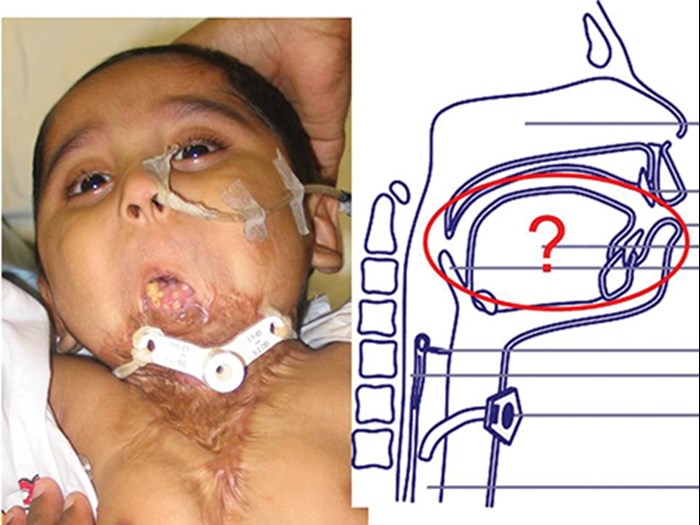 What to do? This is the part of the specialty which I find most challenging and potentially rewarding and it goes straight back to the basic principles of medical practice: establish the diagnosis, assess severity, remove precipitating factors, general measures and then specific measures. It is not just a question of which flap, or how many, or when. It was obvious that a priority was to open up the cheeks and try to restore some volume to the oral cavity. At that time we were very much intrigued by the range of epithelial differentiation that occurs in the lining of the oral cavity; the hard and soft palate, lingual and sublingual surfaces of the tongue, the buccal cavity and alveolar ridge are all different. The concept of site-specific differentiation became very intriguing. Currently we are reconciled to donor site persistence in morphological differentiation in introducing autologous tissue into the oral cavity. The question that set us off in a whole new field of research was the potential of immunologically ‘inert’ allograft epithelial stem cells to undergo multiple directions in differentiation. The source of the stem cells we have worked on are the human umbilical cord lining cells.

Durjoy underwent his first operation on 22 November 2006. He had intraoral grafts placed and flaps to release the anterior neck. He underwent intensive speech therapy support and further surgical releases to open his mouth and stabilise his neck. He returned to Bangladesh in March of 2007 and Figure 7 shows him on the day of his discharge, active, interacting, putting on weight and doing well and learning to keep his eye on the ball. Durjoy was very well looked after in Bangladesh but inevitably as he grew his caloric needs outweighed the possible input through his small oral aperture. In addition his speech was non-existant due to the tethering of his tongue. On 1 November 2009 Durjoy returned to Hong Kong. His mother, father and Sultana, a physiotherapist, accompanied him (Figure 8). 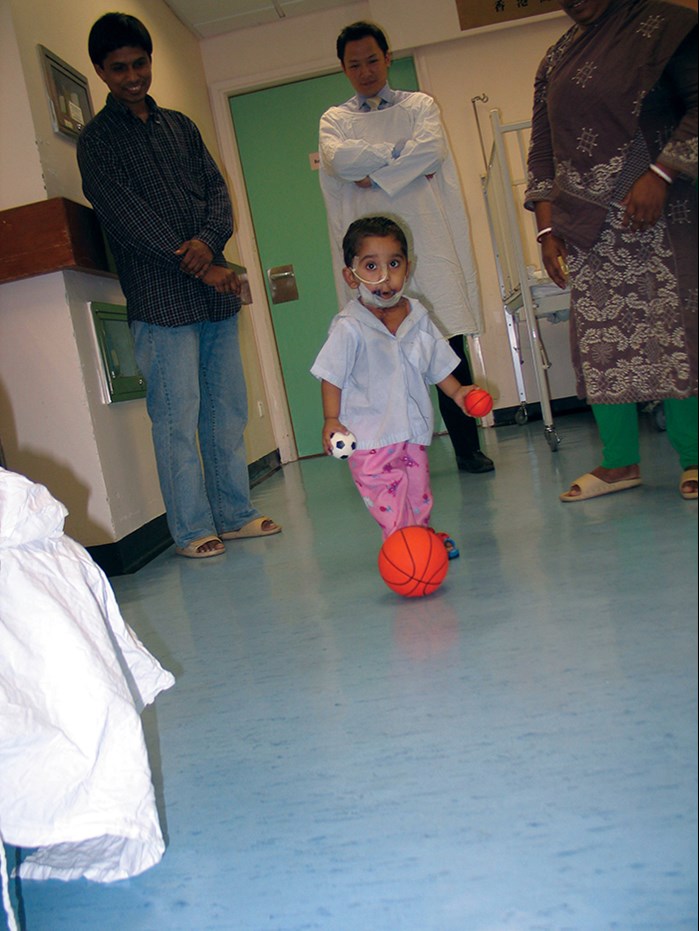 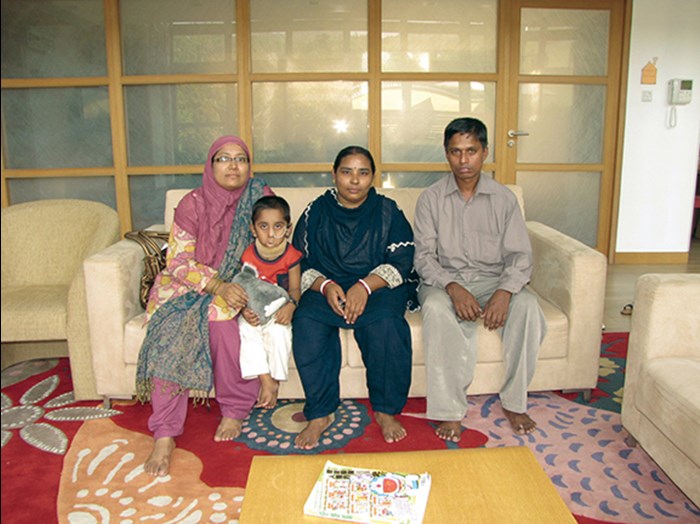 Durjoy underwent further scar revisions in the neck, insertion of a ‘permanent’ gastrostomy tube and further intraoral grafts. It is notable in these children who have had multiple surgical procedures that venous access is always a problem and intubation can be hazardous. Skilled anaesthetic support is essential. Durjoy left Hong Kong in January 2010 with the feeding tube in place. The plan was to continue to improve his nutritional status, to retain and develop his oral function both in regard to speech and feeding and to prepare for further surgery when he is older.

I was told that in his native language, ‘Durjoy’ means invincible. It has been truly remarkable to see how the human spirit will overcome so many obstacles if there is the will to survive, and Durjoy is living up to his name.

Postscript (as of 2014): It is a great sadness to me that the prevailing medico-political situation in Hong Kong has made further surgery there impossible. It would be wonderful if any surgeon reading this article would be able to continue the ongoing process. Get in touch if you can help – diana@pinpoint-scotland.com

Durjoy and his parents would like to say a sincere and heartfelt ‘thank you’ to all those who have helped him in so many ways. 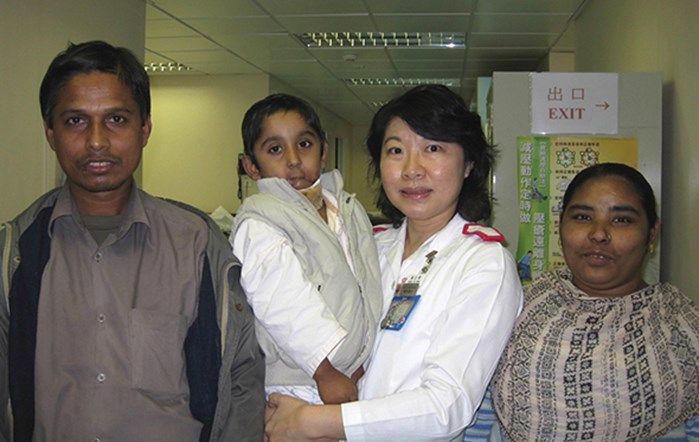