The invention of modern rhinoplasty by Joseph transformed our understanding of nasal anatomy and surgery. His endonasal technique soon spread from Europe to the USA and dominated the surgical culture of the 20th century. The excessive removal nasal support structures led to characteristic and well-recognised series of surgical stigmata that raised questions about this particular approach to surgery.

The paradigm shift arrived in 1971: the invention of the external approach radically altered the philosophy and technical details of the operation. Suddenly, the whole structure of the nose became visible. The ability to directly visualise the nasal cartilages and bones and multiple grafting techniques has now become the technique in North America and many parts of the globe. In good hands, the external approach can achieve excellent results [1-3].

So what happened to endonasal surgery? Surgeons felt that nasal structures could not be seen, complex cases were not treatable and teaching juniors made more cumbersome by this approach. In reality, none of these arguments are true. Advances in surgery, including cartilage sparing procedures, judicious use of grafts and sutures, enable the endonasal surgeon to tackle the hardest cases, including cleft lip nose, ‘last chance’ revision surgery, and the inappropriately named ‘ethnic nose’. Proper education in surgery demands attending anatomical dissection courses. Using the external approach to teach anatomy is no longer justifiable. In short, for the vast majority of patients, endonasal surgery can adequately deliver the desired effect. Hybrid rhinoplasty refers to the happy marriage of the best of both worlds: the lessons learnt from the external approach, such as grafting, and suturing techniques, are combined with philosophy of minimal tissue damage of endonasal surgery to create an alternative third path for rhinoplasty in the 21st century [4-7].

The clinical assessment of the nose for endonasal surgery

The surgeon must obtain a very clear idea of the patient’s aims. Pay special attention to your own emotional reaction to the patient. The past medical history may reveal a history of rhinoplasty, anti-coagulants and alternative medicines, which all have significant bearings on future surgery.

Examine the patient by shining a light on the nose from the midline. Observe the nose for collapse of the external valve during inspiration, surgical scars from past operations, the brow-dome lines (BDLs) and the alar-columellar relationship. A central area of light in the middling dorsum should shine back at the observer. The margins of light and shade are the patient’s current BDLs, and signify the surface projection of the underlying structures such as the lateral aspect of the nasal bones, dorsal septum, upper and lower lateral cartilages. The two BDLs should ideally start at the medial end of the eyebrows, curve towards each other on the dorsum and descend in parallel to their destination at the domes.

In men, they may diverge a little inferiorly, but in female patients, they should stay parallel throughout. The alar-columellar relationship is complex, and reflects the intimate relationship of the soft-tissue envelope, caudal septum and lower lateral cartilages (LLCs). Often described as a ‘gull in flight’, its restoration can pose one of the most challenging aspects of rhinoplasty. Laterally, observe the nose for its landmarks such as the rhinion, nasion, maximal dorsal height, supratip, projection, rotation, columella, vestibule and the action of the depressor septi nasi muscle in shortening the upper lip and de-rotating the tip. These landmarks are all surgically modifiable, and form the basis of technical decision-making.

The ‘rotating stool test’ positions the examiner in a static point while the patient is slowly rotated horizontally from left to right and then back again, with the light shining at the patient’s midline. If the nose is perfectly beautiful, the various subunits simply blend together into a unified whole. There should be no sudden breaks in lines or absolute lines of separation of the various aesthetic landmarks.

No cosmetic rhinoplasty patients should enter the operating room without a clear, endoscopically documented record of the nasal mucosa, middle meatus and nasopharynx, in addition to an adequate collection of photographs. Many patients presenting for cosmetic rhinoplasty also have medically treatable rhinological disease. These issues must be dealt with before the operation, or the patient may attribute their symptoms to the operation rather than pre-existing disease.

The interim period between the first meeting and the obligatory second consultation, allows time for facial analysis, and breathing space for the patient to absorb the information from the first meeting. Facial analysis is not simply a mathematical exercise in measuring angles. The surgeon concentrates on those landmarks that can be altered through surgery. The results are then used to create a tailor-made, and highly unique surgical game plan. The results of the facial analysis are presented to the patient during the second meeting, and both parties reach an agreement about the surgical objectives.

Photo-documentation forms the backbone of facial analysis. While the principles of proportion and harmony in facial analysis are common to all four corners of the globe, there has been a major change in the ideal tip over the past few years. The concept of the double light reflection from the tip no longer features in glossy fashion magazines. Presently, the single smooth tip makes a firm presence on practically every supermodel’s face, whether male or female. This particular type of tip blends effortlessly with the adjoining aesthetic units, and is inseparable from them. As patients often seek to emulate their icons, requests for the single smooth tip are increasing, and require a rethink on our behalf, a modification of current techniques and a re-adjustment in the canons of facial analysis. While emphasising the importance of creating desirable surface aesthetics, delivering the single smooth tip demands alterations in tip surgery, including a re-assessment of harsher suturing techniques, structural grafting and domes-splitting techniques.

The results of facial analysis lead to a tailor-made surgical game plan unique to each patient. Current trends show a move away from the double light reflection in favour of a single smooth tip. It would be interesting to explore the reasons for such a changing taste, but its manifestations are clearly visible in glossy magazines and patients’ requests.

The technical aspect of endonasal surgery

The vast majority of patients presenting for cosmetic rhinoplasty neither desire nor require major reconstruction of the nose. Endonasal surgery implements major functional and aesthetic changes unique to each case. The major aims of the endonasal approach include: maintaining the structural integrity of the nose, preserving valvular function, and restoring or altering surface aesthetics. The emphasis rests on tissue preservation rather than excision, judicious use of grafts, and keeping the number of sutures to a minimum [8,9].

This forms the first, and often a highly demanding, part of cosmetic rhinoplasty [10]. Many patients demand a deprojection of the nose. Instead of excising large pieces of cartilage and endangering the stability of the nose, the astute surgeon will have palpated the nasal spine preoperatively. This structure can push the septum into an over-projected position. It can be reduced and sculpted into a symmetric pedestal for the septum.

The removal of cartilage from the septum needs to remain precise, well planned and always executed with the aim of restoration in mind. The site of cartilage removal leads to vastly different results. To deproject the nose, an inferior strip of cartilage is removed. This incision starts posterior to the newly reformed spine and extends to the bony-cartilaginous junction. Ascending along this border towards the keystone area produces increasing amounts of deprojection, and instability. Damaging the keystone region leads to permanent deformity and must be avoided. Extending the excision anteriorly beyond the spine reduces the stability of the septum as it rests on its pedestal. Curving the incision even more anteriorly to the caudal septum may be necessary in cases of severe over-projection, such as a tension nose. Removing this ‘C’ shape piece of cartilage reduces the intermediate and anterior angle of the septum. In female patients, the reduction of the anterior angle may be desirable in creating a supratip dip; however, the intermediate angle must be restored if an iatrogenic straight columella is to be avoided. If grafts are planned, the central septum can provide a safe zone for harvesting, however, in general, all pieces of removed cartilage should be returned to the septum. Further septal refinements are kept for the very last phase of the operation. The depressor nasi septi muscle is cut and cauterised if necessary.

One of the major objections to endonasal surgery consists of not being able to directly see the LLCs or achieve symmetry through a limited incision. However, this is simply not the case. In many cases, intra / inter-cartilaginous incisions coupled with infracartilaginous incisions allow for precise sculpturing of the tip cartilages and scroll areas. The result is immediately obvious, and avoids the prolonged tip oedema associated with the external approach. Suturing techniques witnessed a huge rise in popularity at first, but are now used more conservatively. Excessive tension on the LLCs can result in iatrogenic stigmata such as the highly undesirable ‘overnarrowed tip’, alar rim retraction, distortion of the lateral crura and over projection. Instead of insisting on LLC symmetry through sutures, surface aesthetic landmarks may also be altered by using gently crushed septal cartilages placed in precise pockets.

Certain suture techniques remain highly valuable. These include the tongue-in-groove, wonder-bra and anti-wonderbra sutures for altering rotation and length, interdomal sutures for reducing a bifid tip, medial crural footplate and subdomal sutures for restoring the alar-columellar relationship. As the endonasal transcartilaginous approach does not destabilise the tip, the act of restoring these structures with various grafts and sutures becomes unnecessary. The plethora of grafts associated with the external approach is becoming less necessary with time. Problems with grafts include undesirable movement, becoming palpable or visible, or transforming the nose from a semi-mobile structure into a solid organ. Precise pockets allow the surgeon to place small amounts of crushed cartilage in exactly the place where they are required to restore surface aesthetics. After all, the patient cares about the surface appearance of the nose, not the anatomy of the LLC. This obviates the need for major structural change, longer operating times and more tissue oedema in the recovery period.

The surgeon sharpens all osteotomes before each case so that they will cut through bone in a precise manner, rather than shatter it. Most noses are asymmetric and require an equally asymmetric osteotomy. Internal basal osteotomies form the backbone of osteotomy, with transverse osteotomies becoming necessary in certain cases. The surgical game plan will have determined the site and type of osteotomy before hand. The line of cut follows the desired line of change with due care to the surrounding structures such as the keystone area, the medial edge of the pyriform aperture and the angular artery / vein.

The last phase of the operation begins with a re-assessment of the current aesthetic lines versus those of the game plan. The caudal septum requires finishing touches, while excessive vestibular skin may be conservatively excised. The intermediate angle is restored with crushed cartilage. Intranasal dressings are kept light, and inferiorly, the surgeon creates space for airflow. External dressings and splints must be placed with adequate care to the restored BDLs, and osteotomies.

The patient presented for revision surgery. The bulging at the naso-frontal angle, the low dorsum, the overprojected and overrotated tip were tackled through a combination of hemitransfixion incision and transcartilaginous approach. 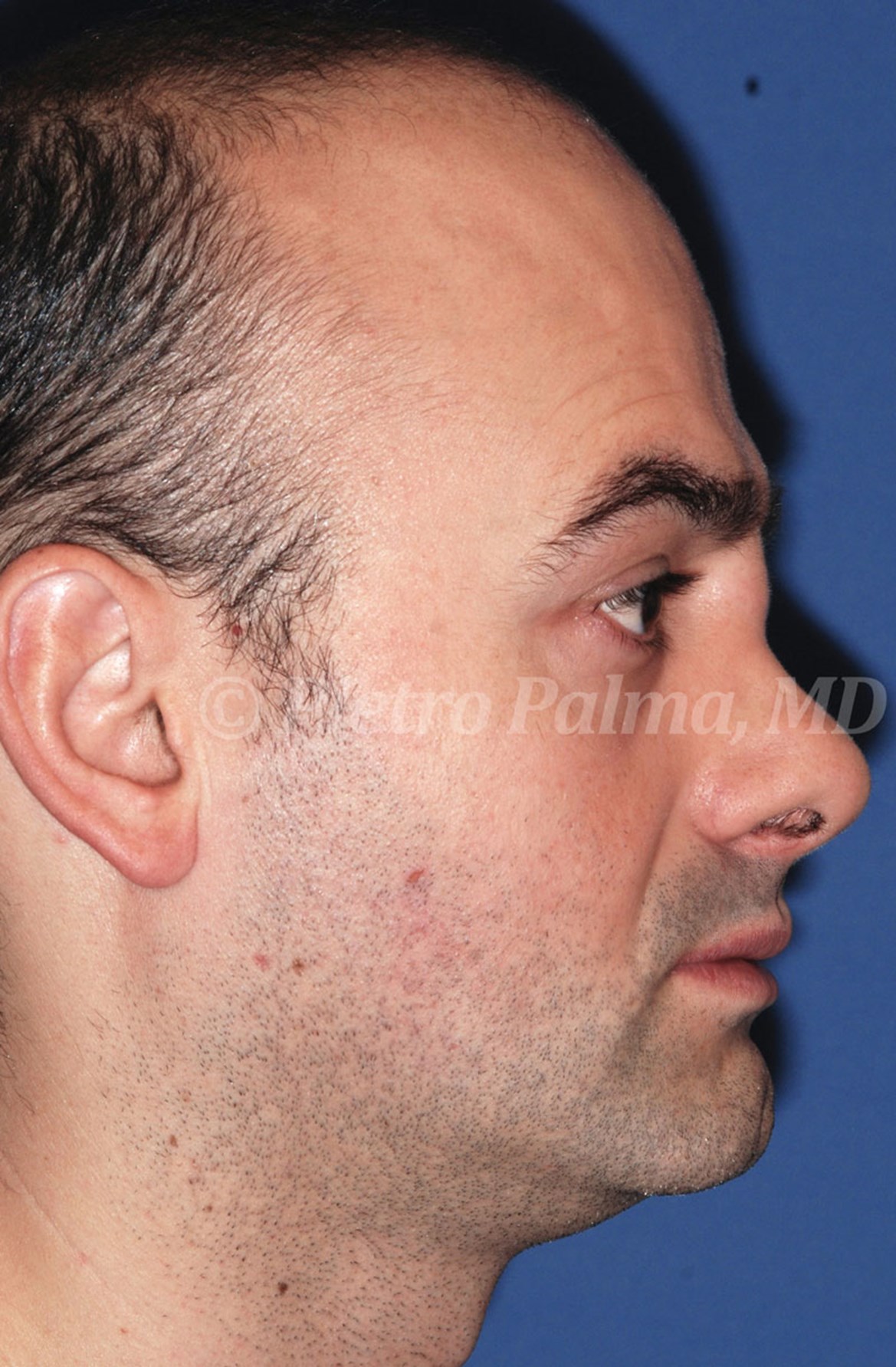 The bulging at the naso-frontal angle was excised (‘inclusion cyst’), the open roof was closed by intermediate and basal osteotomies, the low dorsum was corrected by placing an onlay graft taken from septal cartilage, the junction between inferior nasal spine and posterior septal angle was sculpted so to slightly change both projection and rotation of the nasal tip, and tongue-in-groove suture was used to stabilise tip position. 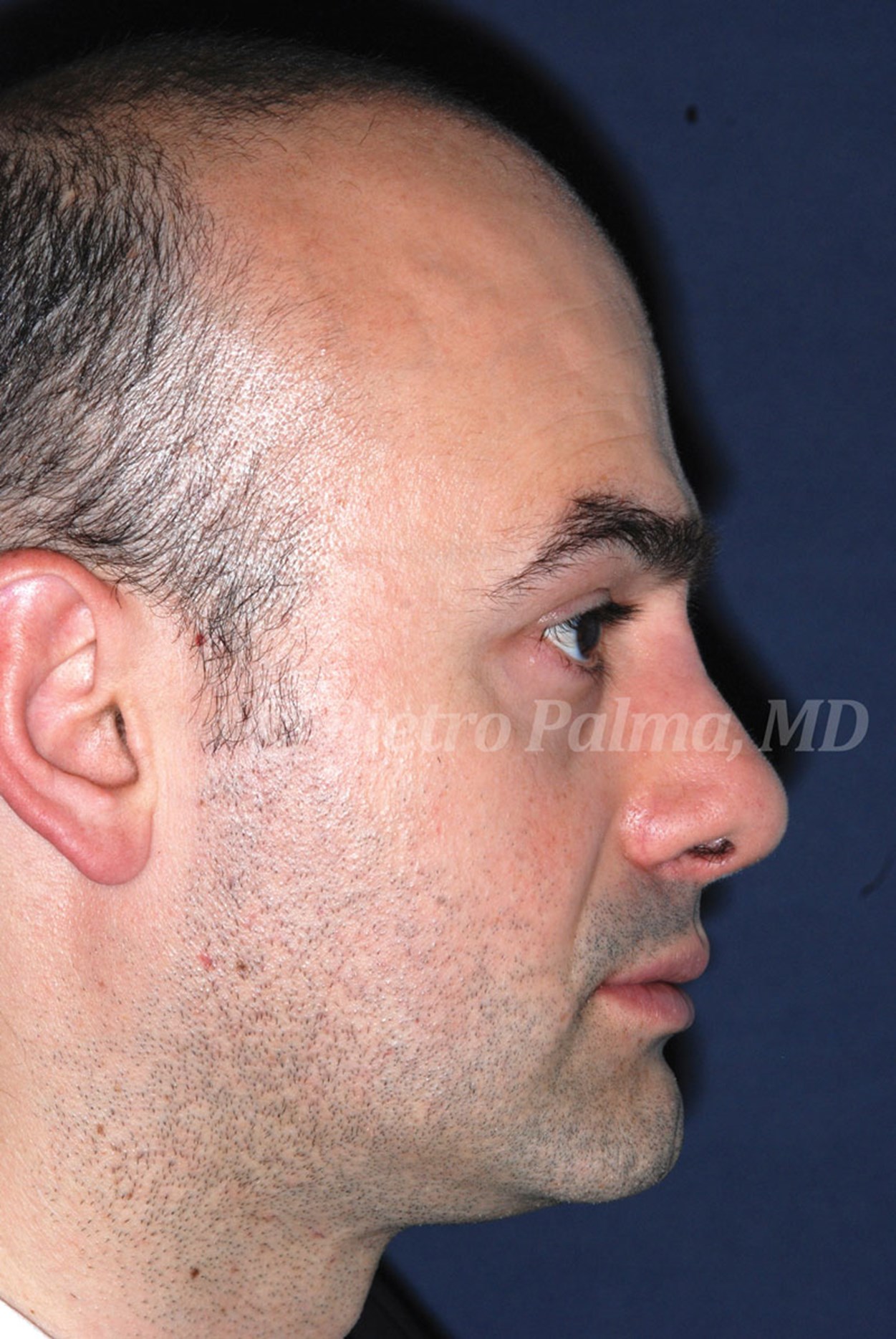 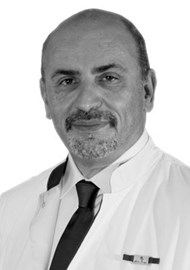 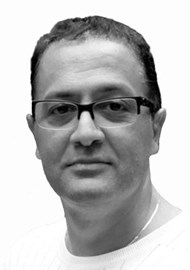