The author explains why the traditional ‘humanitarian mission’ style of charity work needs to change and how the charity CLEFT is making an impact.

It is estimated that between 150,000 and 250,000 babies are born each year worldwide with clefts of lip or palate or both. The great majority of these are in low income / low resource countries. Approximately 75% of these children are treated by or their treatment is funded by non governmental organisation (NGOs). If these NGOs were suddenly to disappear, a huge vacuum would be left in many countries.

There are several models by which NGOs provide cleft care. One model, popularised in the media, has been of large teams of ‘humanitarian missions’ visiting hospitals for seven to ten days, doing many operations and returning home, often with considerable publicity. Frequently, such visits are made following contact between surgeons and charities in the UK with local politicians or charities and are not organised with the local teams.

Such overseas missions can do good, but they can also do harm by de-incentivising local surgeons and other clinicians and by giving an image that doctors from Western countries are inherently better. The emphasis has been on surgery – not on the sort of lifetime multidisciplinary care that cleft lip and palate patients require. Some of these initiatives have undoubtedly provided long-term benefit in the countries involved but often the long-term effect is counterproductive. 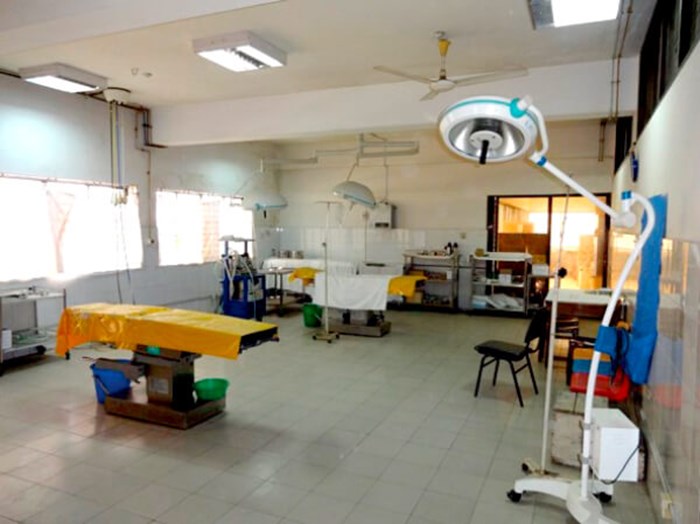 The unused, poorly equipped operating theatre in Dhaka in February 2015. 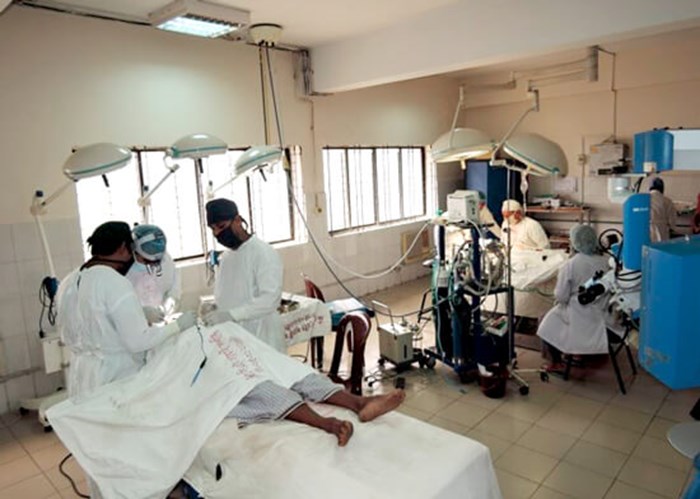 One year later. Since then, a new anaesthetic machine and theatre light has been bought by CLEFT.

Another model is that of paying local surgeons and hospitals to carry out the operations – the more they do the more they are paid. Again, this model has helped many patients, but it has tended to encourage quantity over quality. It is undeniable that this model has allowed many patients, who would otherwise not have been operated on, to receive surgery – sometimes of high quality and sometimes not.

There are many challenges in providing cleft care for babies, children and adults in low resource countries. These include:

A change of emphasis for the future

Although there will be some need for the existing models of NGO support, in the future the emphasis should be towards long-term planning and sustainability.

In the future, the UK can help by:

The needs of every country differ and the charity CLEFT, of which I am currently Chairman, was founded in 2007 and has tried to respond to these needs. Its overseas aims are to support multidisciplinary teams in low resource countries, to help with whatever those teams need (equipment, education, training), to go only at their invitation and to encourage independence rather than dependence. 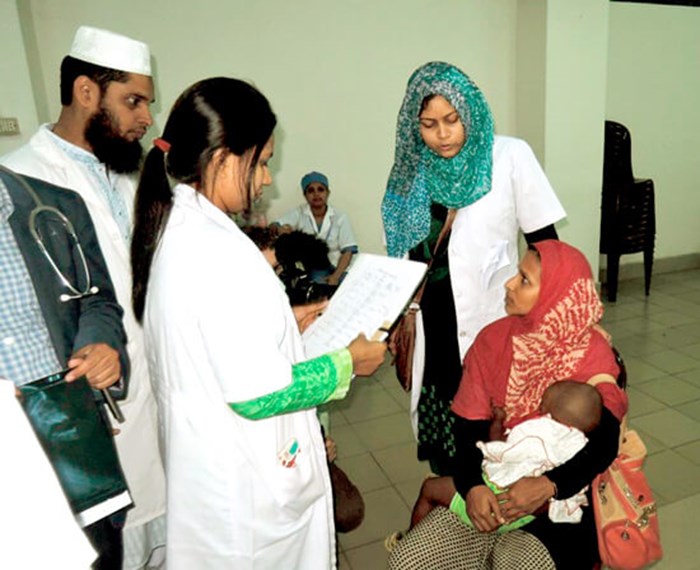 Lia, Speech and Language Therapist, Mahfuz, Orthodontist and Afrina, Surgeon have made one-month training visits to the UK funded by CLEFT.

All developments are designed to be sustainable with an aim for independence within five years, so that we effectively become redundant. There have been successes and failures – there is no quick fix! 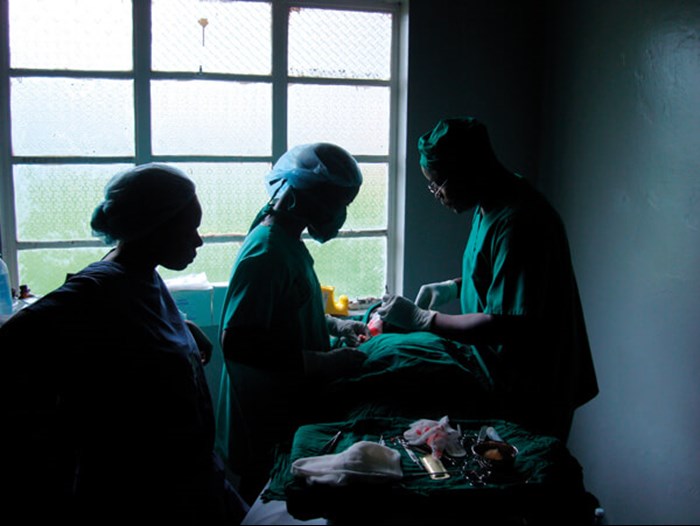 A surgeon operating during a power cut in Uganda – without headlight!

The countries in which CLEFT has been involved have been Bangladesh, Sri Lanka, Egypt, Uganda and the semi-autonomous Kurdish region of Iraq.

I have been visiting Bangladesh since 2001, often with great frustration at internal medico-political problems. However, about five years ago the situation improved and CLEFT has been working with motivated local surgeons to develop a comprehensive multidisciplinary cleft and craniofacial centre in the oldest established university hospital in Dhaka – Dhaka Medical College Hospital.

We have funded the development of a ward and the equipping of an operating theatre. We have also helped in the training of surgeons, speech and language therapists, orthodontists, anaesthetists and nurses, both in Bangladesh and in short visits to the UK.

We have also helped by provided sutures and other equipment for operations. All care is free for the patients. We encourage follow-up, long-term care and the reporting of outcomes. There is still much to do but we hope that this centre will be a model for Bangladesh and in fact we are now looking at establishing similar but smaller centres in other cities in Bangladesh.

Sri Lanka is, by contrast, a wealthier country and I have been visiting there for about 18 years. We have helped, not so much by funding but by support and some training. Excellent centres have been developed in Colombo and Kandy. They now have little need of our support. Recently, we have become involved in helping to develop cleft centres in Jaffna (a part of the country ravaged by recent civil war) and in Kurunegala. 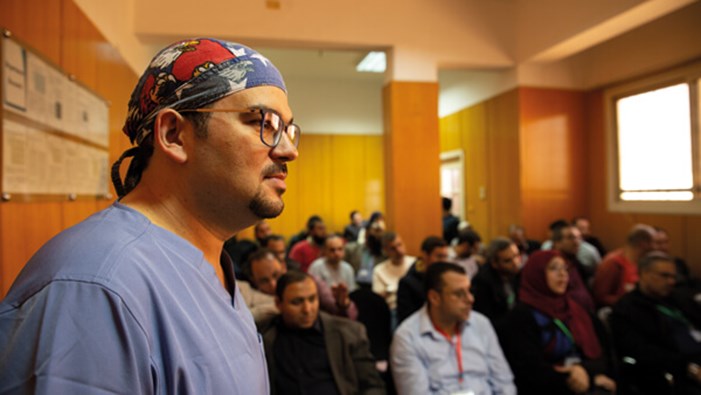 In the poorest southern part of Egypt (Upper Egypt), a very strongly motivated local team have been striving, against the odds, to build a first-class cleft centre. This is in a country where doctors are paid £200 per month. We, and other charities, have been able to help by providing, for example, audiology equipment and an endoscope for examining children whose palates are not functioning satisfactorily. In addition, we support by arranging regular visits and holding workshops and working with the team. Uganda Uganda is in many ways more challenging. Africa generally has become very dependent on overseas NGOs and de-incentivisation is a major problem. It is very important for the future that cleft surgery is carried out in major teaching hospitals such as Mulago Hospital in Kampala. A new generation of surgeons need to learn about multidisciplinary care of patients with clefts. 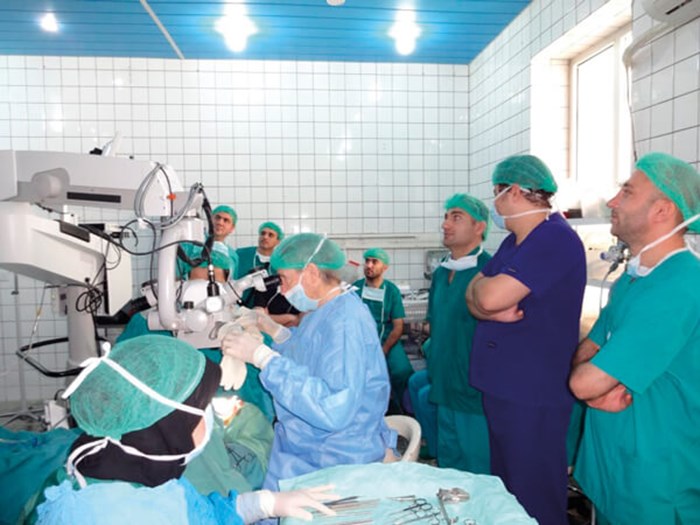 The semi-autonomous region of Iraq

In Sulamaniya, the needs are again different. Forty years of almost continuous wars have inevitably meant other priorities and also limited the opportunities for surgeons and others to travel internationally and to keep up to date. Our role can be to encourage, support and to help update.

CLEFT’s charitable arm is currently linked primarily with the North Thames Cleft Service based at Great Ormond Street Hospital for Children, London and the St Andrew’s Centre, Broomfield Hospital, Chelmsford. In the future, it is hoped to build a national charity with a similar philosophy – to help create and support multidisciplinary cleft teams in many other cities and countries with much less resources than the UK.

More information on CLEFT – Bridging the Gap can be found on the website www.cleft.org.uk

Some case histories from Bangladesh

YEASIN was born with a cleft lip and palate. Like many people in Bangladesh, his parents worked in garment factories – probably making clothes for UK shops. Each would have earned about £70 per month. They lived in a galvanised iron single room shack in a shanty ‘town’. They desperately wanted to have a baby and Yeasin was born in September 2016. When father saw him, he left home. 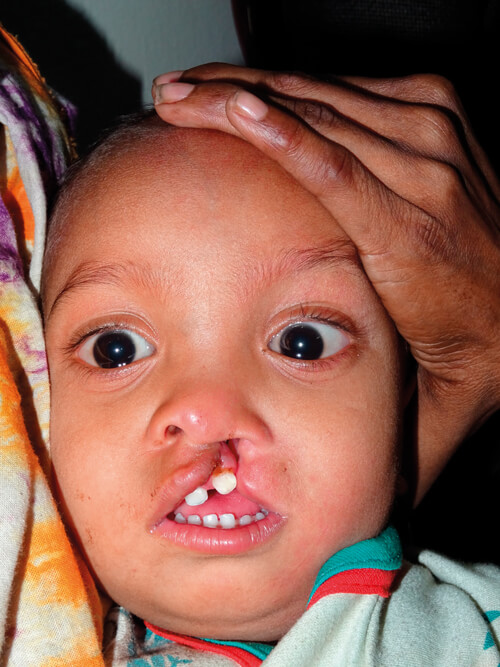 Yeasin was brought by his mother and grandmother to the cleft and craniofacial centre attached to Dhaka Medical College Hospital. At the age of 17 months, he weighed 7kg.

Because of the very difficult social situation and his failure to thrive, both Yeasin’s lip and palate were repaired in the same operation. When his father saw him after the operation, he moved back into the home but sadly, soon after, the father died. We saw him a year after his operation. He is apparently developing normally and talking well. 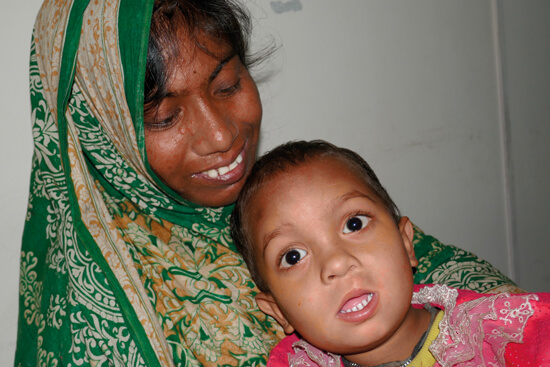 Yeasin one year after repair of cleft lip and palate.

IBRAHIM. By funding research, one question that CLEFT is looking at trying to answer is why there seem to be so many more craniofacial clefts in Bangladesh than in other parts of the world. Ibrahim presented with a bilateral Tessier 4 cleft. 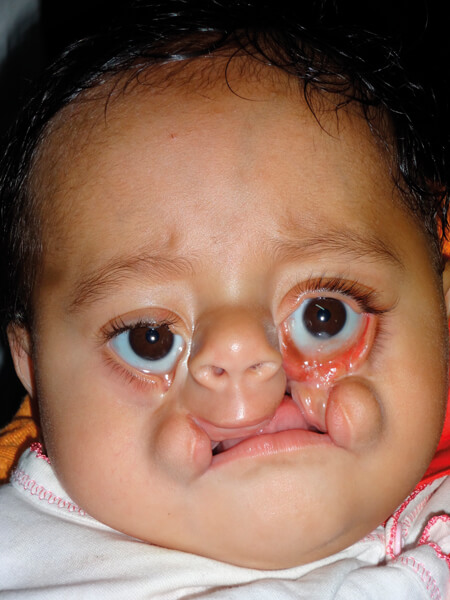 Ibrahim was lucky to have a supportive family who made the long journey from home to the Dhaka Medical College Hospital. Ibrahim’s dad said: “People used to be scared of him, they used to look away. When he entered the operation room I felt apprehensive and worried...only Allah knows what will be the outcome.” 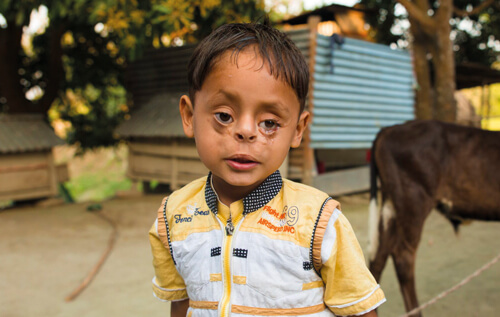 Ibrahim in his home village.

Like many children with craniofacial clefts, Ibrahim has needed a number of operations and further surgery is planned.

SALMA. Salma came from Chittagong. Aged 20, she had never been to school. First, her lip and anterior palate were repaired and the remainder of the palate repaired 12 months later. She will never be able to regain the lost years but hopefully her future is brighter. 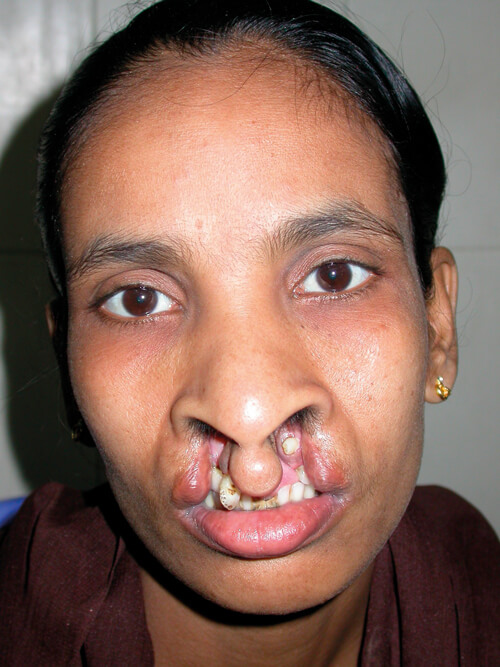 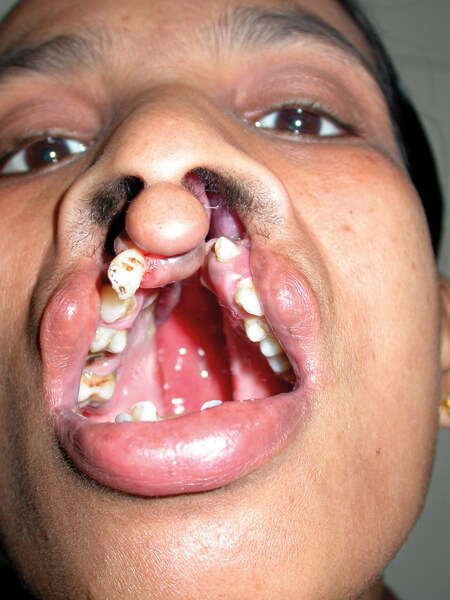 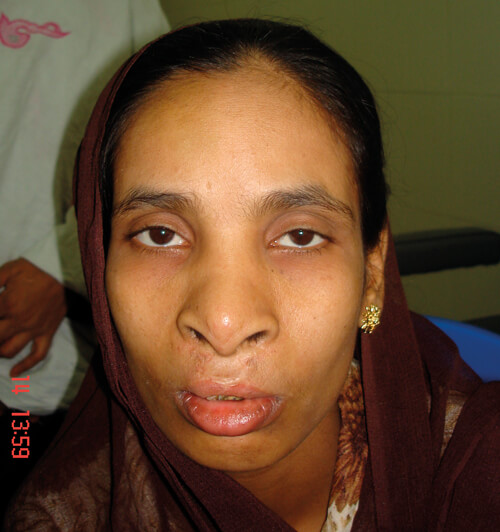 Salma one year after her first operation. 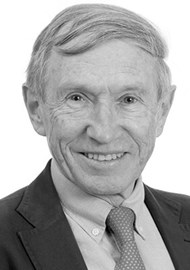