Can I quit the gym? Low level laser and body contouring
By Alexandra Bonsall and Sanjay Rajpara

Is low level laser the answer for patients seeking a non-invasive method for body contouring?

Balancing energy intake and energy expenditure is the healthiest and most sustainable means of weight loss and toning, but despite this, areas of local fat deposition may persist. Depots of fat in the lower body have been described as efficient at removing fat from the circulation, but resistant to weight loss, in comparison to upper body depots, which are able to discharge fatty acids at a high rate [1].

Adipocytes store excess energy as triacylglycerol. Negative energy balance stimulates lipolysis, resulting in release of glycerol and non-esterified fatty acids (NEFAs) from the adipocyte, with shrinkage and likely apoptosis of adipocytes. NEFAs bind to serum albumin for transport to tissues including muscle and liver. During fasting, the concentration of NEFAs typically increases as fatty acids are released, but chronically high levels of NEFAs are often associated with metabolic dysfunction, type II diabetes and obesity [3].

LLLT causes no demonstrable tissue heating or macroscopic changes in tissue structure [4]. It is believed to act by a photobiological or biostimulatory reaction [5], exciting the photoreceptor cytochrome C oxidase and affecting the cell bioenergetics [6]. Transmission electron microscopic images have demonstrated formation of transitory pores in adipocyte membranes followed by collapse of adipose cells [7]. LLLT appears to stimulate the adipocyte mitochondria, increasing adenosine triphosphate synthesis and up-regulating cyclic adenosine monophosphate, stimulating cytoplasmic lipase, which converts triglycerides into NEFAs and glycerol. These can pass through the pores in the cell membrane [8]. LLLT does not cause necrosis or apoptosis of the adipocyte, unlike HIFU or cryolipolysis [9]. 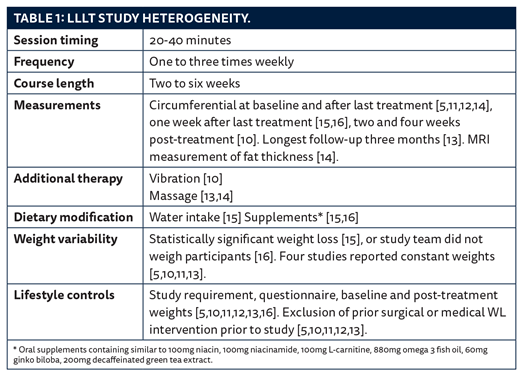 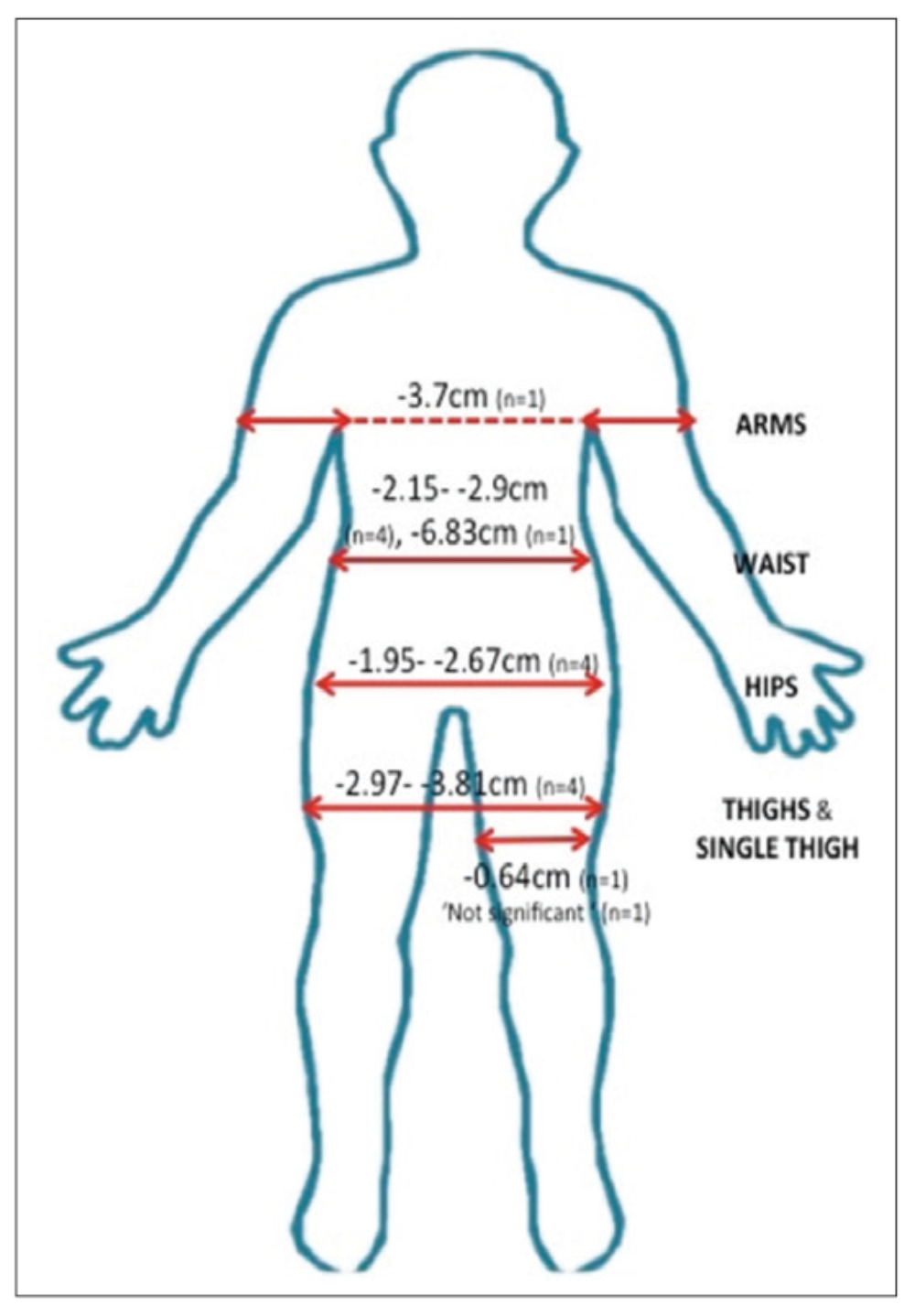 Most studies assessed improvements at the waist and / or thighs. Mean circumferential reductions in studies reviewed by Kennedy et al. [9] are depicted in Figure 1. All except one study [14] produced statistically significant circumferential reductions. The largest reductions occurred in Savoia et al. [10], in which LLLT was combined with vibration therapy to treat 33 patients, with one treatment per week for six weeks. The largest measured reductions were seen at the end of the treatment, with no adverse events (abdomen and flanks -6.83cm, thighs -3.42cm, buttocks -6.16cm). The choice of additional therapy seems relevant as Gold et al. [13] produced a lesser but still significant -0.64cm (p<0.05) reduction in one thigh after two sessions per week for four weeks of LLLT plus massage.

It is possible that duration and frequency of treatments, and course length, do not significantly impact on the overall results. The study with the highest frequency and longest individual treatment time, Jackson et al. in 2012 [16], delivered 40-minute sessions three times weekly for two weeks to 689 patients, resulting in waist -2.9cm, hip -2.41cm, thighs -3cm, and -0.81cm for each arm. However, with the same frequency and course length, but treatment time of 20 minutes, Jackson et al. in 2009 [12] also produced significant results at the waist -2.49cm, hip -2.67cm and thighs -3.81cm, and with 30-minute sessions twice weekly for four weeks Caruso et al. [5] also produced significant reductions at the waist of -2.15cm.

There is little data on the longevity of LLLT therapy. Kennedy et al. [9] describe fat reaccumulation occurring more quickly after LLLT than HIFU or cryolipolysis, which is thought to be due to the differing effect on the adipocyte. Gold et al. [13] reported a maintained significant reduction in thigh circumference at one month, with some reduction maintained to three months, compared with a patient control.

Kennedy et al. [9] reported that LLLT had the fewest and mildest side-effects out of the non-invasive techniques. Thirty-eight percent of LLLT subjects described swelling or erythema at the treated area, 32% had pain or tingling during treatment, and increased urination was also reported.

LLLT can produce statistically significant reductions in body circumference measurements in non-obese patients, with minimum side-effects. Results are noticeable as soon as treatment is over, whereas HIFU and RF results are generally seen over 4-12 weeks [9], but the results diminish over the following months.

Savoia et al. [10] found that, after the entire study protocol, serum triglycerides (esterified fatty acids) and very low-density lipoprotein (VLDL) levels were mildly decreased, and liver function was not affected [10]. However, despite evidence that NEFAs are released [8], and availability of the blood test [17], the levels of NEFAs post-procedure have not been measured. Caruso et al. [5] estimate that the amount of fat mobilised with a single lipolaser treatment is a mean of 52g. It was felt that this amount of fat could be consumed in a large meal, and if the weight of the subjects was stable, the mobilised fat would be metabolised or distributed into fat depots typical of their fat distribution. It was suggested that the laser sessions should add no more risk of atherosclerosis than the routine eating of meals. UK health guidelines [18] recommend that the average man should eat no more than 30g of saturated fat a day and the average woman no more than 20g.

During negative energy balance, fat stores are released and metabolised for energy. Redistribution of fat using laser interventions does not change the body’s lipolytic thresholds, and so in LLLT, fat stores are being released with no requirement for extra energy. This would increase the level of circulating NEFAs for an uncertain duration of time, before re-deposition at their original or an alternative body site. Savoia et al. [10] noted this was especially likely to happen in the absence of a healthy lifestyle. Another concern is the site of fat re-deposition, as ‘central’ fat deposition is considered less healthy than subcutaneous. When subjects undergoing abdominal surgery were given isotopically labelled fatty acids and biopsies of fat depots taken at surgery 24 hours later, the accumulation of label was most marked at omental and retroperitoneal depots [19].

Health supplements such as niacin, niacinamide, L-carnitine, omega 3 fish oil, ginko biloba, decaffeinated green tea extract [15,16] are intended to stimulate fat metabolism, though their impact is not well known. The use of additional physical therapies may enhance efficacy and have health benefits, such as vibration therapy, which is thought to promote metabolism of lipid by stimulating skeletal muscle and vascular and lymphatic drainage [10]. Due to heterogeneity it is uncertain whether the combination of LLLT and vibration in Savoia et al. [10] explains their superior circumferential results, but complementing LLLT with additional treatment and / or encouragement to promote metabolism seems healthier for the patient and may produce the best and most sustainable results. 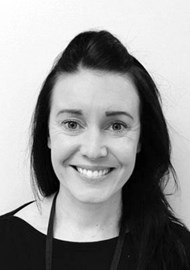 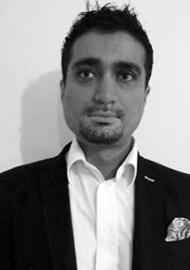