The shocking acid attack on two British nationals in Zanzibar in August 2013 drew attention to a little known and under-reported form of interpersonal violence. Acid attack is a particularly vicious form of a premeditated assault, where acid is thrown, usually at the face in order to disfigure, maim and blind, but not to kill [1]. The targets are mostly women and girls [2].

Survivors of the acute attack will be left with permanent disfigurement and often live in social isolation – devastating their self-esteem and psychological wellbeing. Survivors need urgent specialist medical treatment, sanctuary, and subsequently reconstructive surgery. Follow-up physiotherapy, counselling and long-term support will be needed to rebuild their lives. A survivor often requires multiple surgical procedures. Child victims require prolonged specialist care from plastic and reconstructive surgeons as well as physiotherapists and counsellors – specialist skills that are often lacking in many countries in which acid violence is prevalent.

Thankfully, the two British girls were able to receive quality medical treatment in the UK. Sadly, this is not an option for the vast majority of victims in many other parts of the world. Most attacks occur in developing countries where this support is not available [3]. Acid attacks have a lifelong, tragic consequence for its victims and their families.

Every year thousands of people across the world are subjected to deliberate and premeditated attacks with nitric, hydrochloric or sulphuric acid [4]. Attacks often occur as a result of domestic or land disputes, or as a violent act of revenge towards a girl or woman who has rejected a marriage proposal or spurned sexual advances. During an attack children are often in close proximity to their mother and as a result suffer burns. Sadly children are also deliberate targets of attack.

Attacks are most common in societies with unequal relations between men and women, and where the rule of law is weak. However, acid attacks also occur in advanced economies. There have been recent attacks in the US, Canada, the UK and Italy. Between September 1992 and August 2001 a total of 19 patients had sustained a chemical assault in one hospital in Hong Kong [5]. The easy availability of acid, such as nitric or sulphuric acid used in manufacturing and processing cotton and rubber, contributes to incidents of acid violence in many countries. Acid violence can occur anywhere but the countries with the highest recorded levels of acid violence include Afghanistan, Bangladesh, Colombia, India and Pakistan. Globally there are as many as 1500 recorded attacks a year. However, the real figure is likely to be far higher. There could be as many as 1000 attacks a year in India alone. However, many attacks go unreported. Survivors of acid attacks live in fear of reprisals for reporting the attack. They also know that their chances of achieving a prosecution are tiny [6].

ASTI is a UK registered charity (no. 1079290) and the only international organisation whose sole purpose is to end acid violence. ASTI was founded in 2002 and now works with a network of six Acid Survivors Foundations in Bangladesh, Cambodia, India, Nepal, Pakistan and Uganda that it has helped to form. ASTI has helped provide medical expertise and training to our partners, raised valuable funds to support survivors of acid attacks and helped change laws.

A key role for ASTI is to raise awareness of acid violence to an international audience so that increased pressure can be applied to governments to introduce stricter controls on the sale and purchase of acid. At present a litre of acid can be bought over a shop counter for the equivalent of as little as 10 pence.

ASTI’s goal is to eradicate acid and burns violence and to ensure that survivors live with dignity and without fear. Our aim is a 90% reduction in acid violence by 2030.

What has been achieved to date?

What next for Acid Survivors Trust International

Many cases of acid violence, especially in rural areas, go untreated and unrecorded. Some of our local partners are new and need money and practical help to fulfil their mission. Other countries have not yet begun to address the problem.

ASTI has been awarded a grant by the British government’s Department for International Development for its work in Pakistan and Nepal. The project started in November 2013 and will run for three years. It will focus on medical attention and counselling for survivors; rehabilitation and reintegration of survivors; implementation of legislation on acid and burns violence; and awareness-raising.

ASTI facilitates information and knowledge share between its local partners so that the successes and lessons learnt from Bangladesh can be replicated in other countries which have a high prevalence of acid attacks. In June 2012 ASTI (with financial support from the British government) organised and facilitated a five-day workshop in Kathmandu to develop the first theory of change on tackling acid violence.

This theory of change explains the key changes that ASTI and its partner organisations seek to bring about and the pathways that lead to those changes. This workshop brought together ASTI’s partners from Bangladesh, Pakistan, Nepal, Cambodia and Uganda. It provided an opportunity for our partners to share knowledge and information based on their respective experiences in tackling acid violence and supporting survivors.

If our vision of a 90% reduction in acid attacks by 2030 is to be realised – acid violence in India has to be tackled. There are thought to be over 1000 cases per year. There is genuine momentum for change in India. At the time of writing this article the Indian Supreme Court had directed all states and union territories to frame rules to regulate the sale of acid [7].

International human rights laws require governments to act affirmatively and with due diligence to protect human rights and to respond to violations. ASTI and its local in-country partners advocate for legislation to focus on three key areas:

However, laws are only truly impactful if they are effectively enforced. Successful enforcement will only come about through the appropriate gender sensitisation training of police and judiciary, appropriate resources to implement the laws and the on-going monitoring of cases through the investigation stage (from the point of First Incident Report) to the case reaching court.

The reality is that acid violence reflects gender inequality and discrimination in society. The introduction of laws is just one part of the solution [1]. The other is changing attitudes and behaviour so that underlying gender inequality is challenged and addressed. The role of survivors as advocates for change cannot be over-estimated. 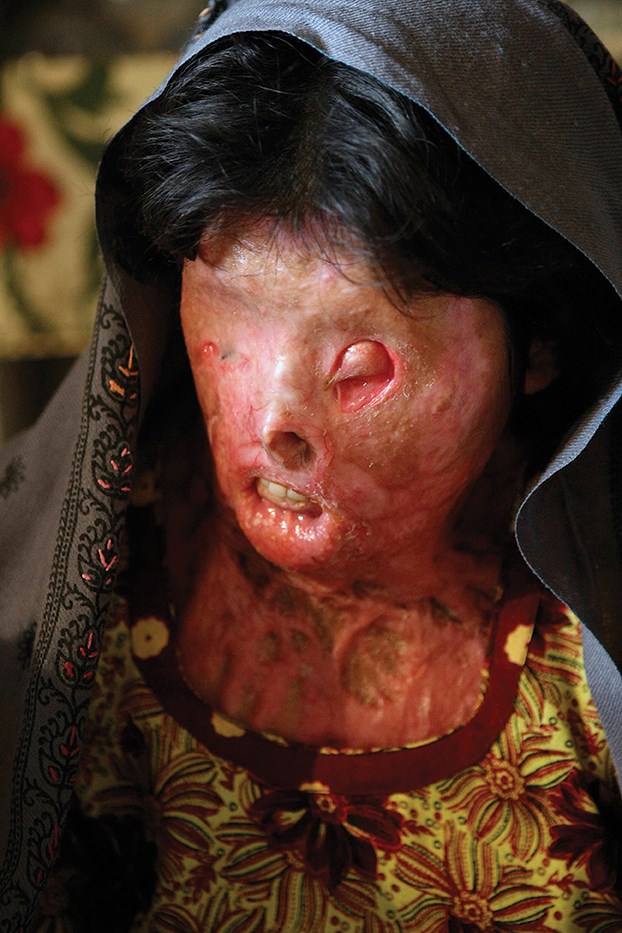 Naieema and Samina, Pakistan After the sudden death of her husband, Naieema was remarried to her husband’s elder brother, who was already married. In the summer of 2008, as she slept in the courtyard of her house in a remote village in the Punjab, Naieema was attacked with highly concentrated acid by the nephew of her new husband’s first wife. The intention was clear: to disfigure Naieema beyond any recognition. ASTI’s partner in Islamabad, the Acid Survivors Foundation Pakistan (ASF-P), mobilised Naieema, her five-year-old daughter Samina and 11 other acid survivors to embark on a 10 hour overnight bus journey from Multan to the ASF centre. Three expert volunteers from the UK – ASTI’s Burns Rehabilitation Team – were awaiting their arrival. After her attack, Naieema has been left with most of her body recovering from burns that have destroyed her eyes and left her face without a trace of any features. Both Naieema and her daughter were given counselling, which has helped Samina understand and come to terms with her mother’s disfigurement. However, Naieema lives separated from her other three-year-old daughter, who is currently too upset by her mother’s appearance to be affectionate with her. 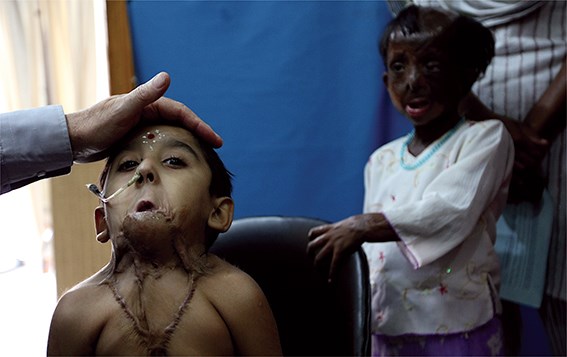 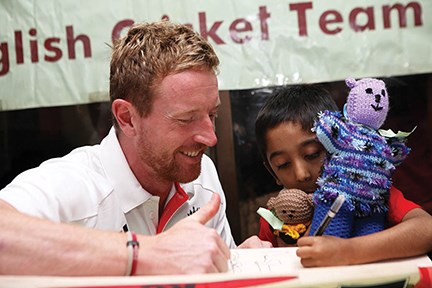 Durjoy At just a few weeks of age Durjoy was given acid to drink by his paternal aunt. She was the wife of Durjoy’s father’s elder brother and she had two daughters. As inheritance of land and property went through the male lineage, the aunt feared her family would lose their inheritance. Durjoy’s parents took him to the nearest health complex, but this was unable to treat him and failed to wash the acid out of Durjoy’s body. The family were forced to take him to the district hospital five hours away, which was also unable to help him, before he was transferred to the divisional hospital. Six weeks later, Durjoy was discharged. The acid caused such damage that his neck was fused to his chest, his lips and mouth were severely burnt, and he could only be drip-fed. Acid Survivors Foundation – Bangladesh (ASF-B) came to know about Durjoy from a nurse at the divisional hospital. In 2006, ASTI trustee and volunteer plastic surgeon Dr Ron Hiles operated on Durjoy at the ASF hospital. The operation lasted seven hours and was extremely complicated. The doctors had been unsure about the severity of the damage inside his mouth, but they were able to open his lips and release his oral cavity. The evening following the operation, Durjoy suffered heart failure. ASTI subsequently arranged for him to be taken to Hong Kong for further surgery. The story of Durjoy is tragic and extremely shocking. However, this little boy survived and he has a future. There is no doubt that without the combined work of ASF in Bangladesh and ASTI in the UK, Durjoy would not be alive today. In 2011 the England Cricket team visited our partner’s 20-bed hospital in Dhaka. ASTI ambassador Paul Collingwood is pictured with Durjoy. See the article “Durjoy - the Hong Kong story” to read the follow-up story of Durjoy’s further treatment in Hong Kong. 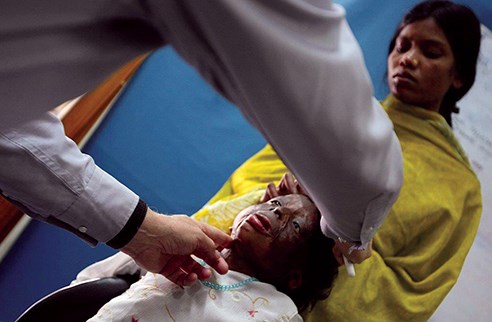 Ron Hiles ASTI medical advisor and former trustee, Dr Ron Hiles OBE has personally performed over 1000 reconstructive surgery operations. A former president of the British Association of Plastic Surgeons, Ron has used his leave every year for the past 20 years to travel to treat acid attack survivors and train surgeons. The surgeons that Ron has trained have carried out many operations on acid burn survivors. 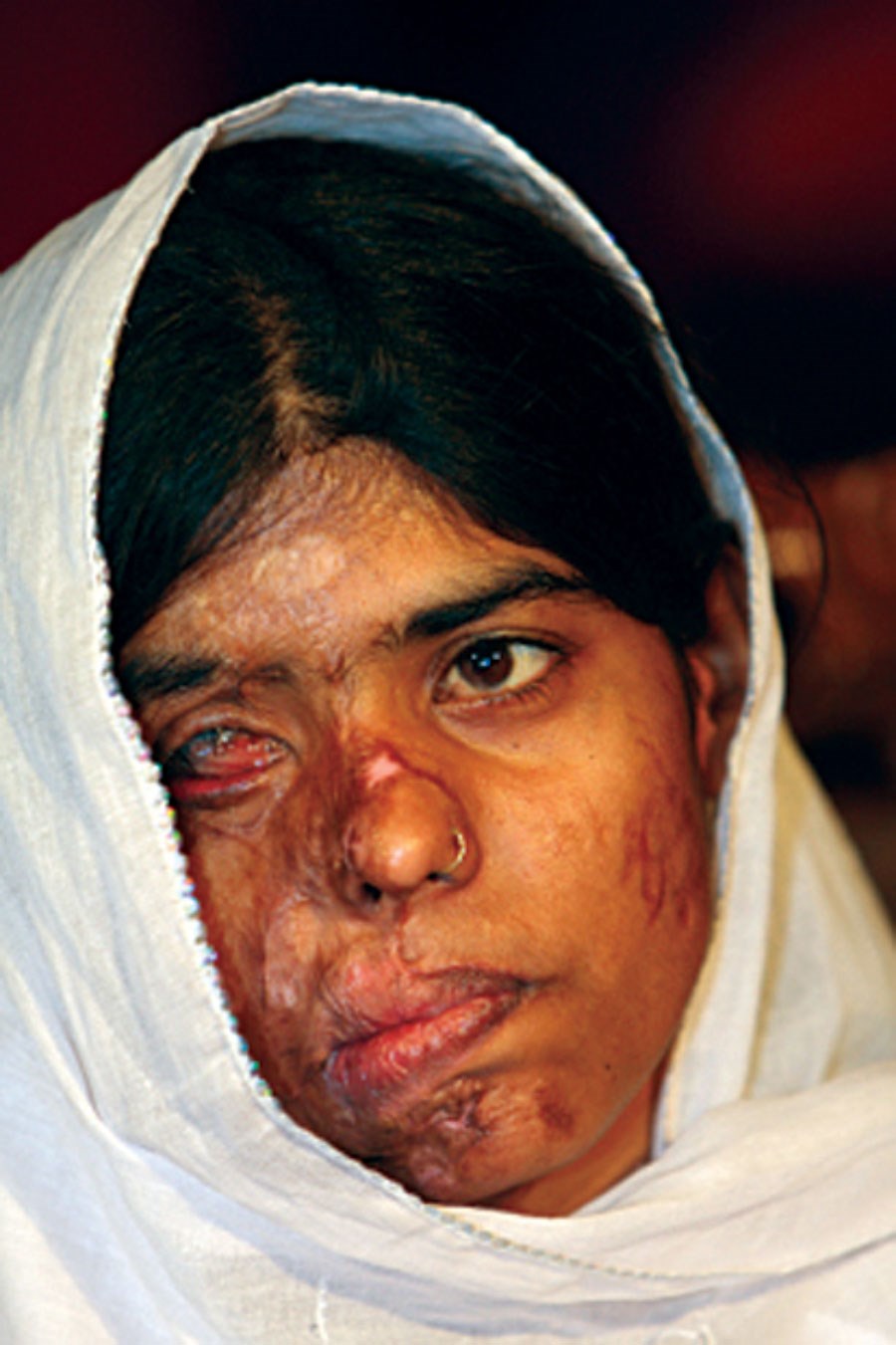 Bushra Bushra, the daughter of a farm worker from the Punjab, Pakistan, was just 15-years-old when she turned down an offer of marriage from a neighbour in her village. In retaliation, he threw acid in her face. The effect of the acid on her skin was immediate and devastating. It burnt through skin and flesh and part of her cheek bone. She lost her sight in one eye. Ten years on from her attack Bushra’s self-confidence has gradually returned, surgery has improved her mobility and reduced her scarring and she lives an independent life. She helps counsel other victims of acid throwing and helped to campaign for new laws to end acid violence in Pakistan. 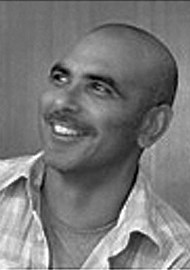