How I Do It - Treatment of rheumatoid arthritis in the hand: addressing the cosmetic and functional deficit using joint replacements
By Mai Rostom and Philippa Rust

In his work Orthopaedia Nicholas Andry was one of the first to define the ideal hand, in terms of ideal proportions and appearance [1]. Rheumatoid arthritis (RA) is a chronic, erosive inflammatory arthritis thought to affect approximately 1% of the UK adult population [2]. Approximately 700,000 adults suffer with the disease in the UK, with approximately 75% of patients being women and roughly 20,000 new cases every year. The gold standard of care is early identification and medical treatment in an attempt to prevent joint and organ damage [3,4,5].

One of the characteristics of rheumatoid arthritis is progressive joint destruction and deformity that can lead to significant loss of hand function and impaired ability to perform activities of daily living [6]. There are various deformities that can develop in the rheumatoid hand including z deformity of the thumb and ulnar deviation, swan necking and boutonnieres of the fingers [7].

The primary goals of treatment in the rheumatoid hand are pain relief and restoration of function. Although the improvement of cosmesis is not the indication for surgery, it is a consequence that is appreciated by patients. Surgical treatment of the rheumatoid hand is challenging and requires a stepwise approach. The general guidelines are to address proximal joints before distal joints and to begin with simple procedures that give reliable results [8]. In this article we will focus on treatment of RA at the metacarpophalangeal joint (MCPJ).

Approximately 40% of patients with RA have intrinsic tightness. One theory is that as the intrinsic tightness progresses, patients can develop MCPJ subluxation. With rheumatoid involvement of the soft tissues, there will be weakening and elongation of the MCPJ capsule and collateral ligaments. The flexor tendons enter the flexor sheath at an angle, exerting an ulnar and palmar pull that is resisted in the normal hand. As resistance to displacing forces is lost, the extensor tendons and the proximal phalanges are displaced in an ulnar and palmar direction. The end result is increased ulnar drift, subluxation of extensor tendons, and palmar subluxation of the MCP joints. See Figure 1. 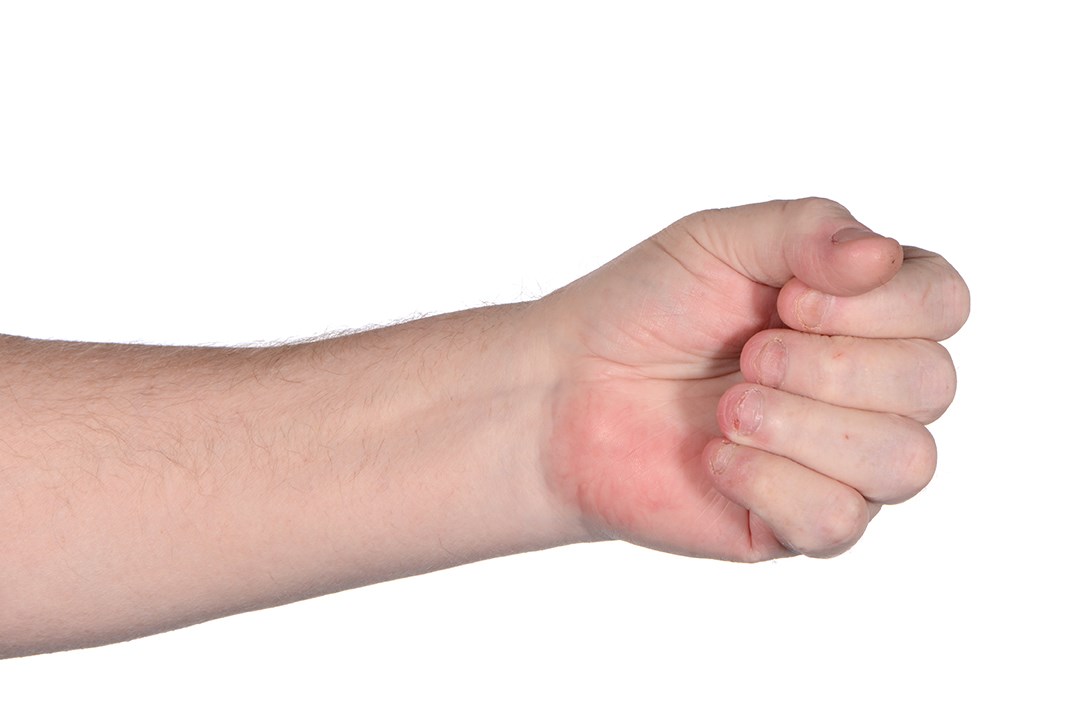 A common procedure used to correct ulnar deviation and MCPJ palmar dislocation is joint replacement using silicone implants. Adjunct procedures such as intrinsic muscle release, tenosynovectomy and extensor tendon realignment may also be required. The goals of surgery are pain relief and reduced deformity; it is important to caution the patient that an increase in strength of the hand is not to be expected.

The procedure is done under regional or general anaesthesia with tourniquet control. A transverse incision across the MCP heads is our preferred approach. The dorsal veins are protected and any synovitis is excised. The extensor tendons are mobilised and retracted to allow access to the MCPJ. The joint capsule is opened, leaving a lateral cuff of sagittal band to repair later. The head is resected, we use an osteotome but a saw may also be used. The proximal metacarpal is then reamed, followed by the proximal phalanx. A sizer is then used to check the suitability of the implant, followed by insertion of the silastic joint and closure of the joint capsule. At this stage the intrinsic muscles can be released if tight, and the extensor tendons centralised if subluxed. The procedure is then repeated on the remaining joints. The patient is treated postoperatively by hand therapists with splinting and an active exercise regime. See Figure 2.

Arthroplasties are a good option for rheumatoid patients suffering with pain and deformity at the MCPJ. Chung et al. showed that the benefits of MCPJ replacements continued through three years after surgery [9]. They showed that surgically treated patients, when compared to non-treated patients, reported significant improvements in hand function, activities of daily living (ADL), aesthetics and satisfaction over time [9].