So in the space of just a few days the Junior Doctors in the UK have engaged in the first all-out strike in the NHS since 1975. I was a medical student then and the issue was pay and conditions. A Labour government was in power and Barbara Castle was the Health Minister. She wanted to stop NHS consultants doing private work and impose a new contract on junior doctors which would massively increase their overtime commitments with very little financial compensation. In the end a negotiated settlement was reached on both points but not without some very harsh words being exchanged. Meanwhile, in Hong Kong, the government is trying to reign in the professional regulatory authority, the Medical Council of Hong Kong (MCHK), by making changes in its composition. The President of the Hong Kong Medical Association (HKMA) Dr Louis Shih has resigned with immediate effect over a heated debate about the reforms of the MCHK. The issue comes down to a fight amongst the ‘traditionalists’ and the ‘modernists / realists’. The former are those who have been protecting the profession at the expense of patient safety. They do not want competition based on competence or outcomes, they do not want anything like revalidation to ensure standards are maintained, they are greedy, selfish and completely unprofessional. The realists recognise that times are changing; the dishonesty and the corruption associated with a small but powerful minority in the private sector is bringing shame and public discontent regarding the entire medical profession. So it is against this backdrop that we continue to explore the tragic death of a young girl undergoing a ‘cosmetic transformation’ in a private clinic in Hong Kong. In the course of eight minutes her life was transformed by the parenteral administration of two potent drugs, pethidine and lignocaine hydrochloride (with adrenaline).

Pethidine is a synthetic opioid. In the product information sheet it is recommended that if intravenous administration is given then it should be by a very slow, dilute, solution. It is noted that serious and / or life threatening reactions have been associated with the use of pethidine and that it should not be used by intravenous injection unless resuscitative equipment and narcotic antagonists are readily available. The product information sheet also mentions pethidine associated neurotoxicity (PAN), with a range of excitatory CNS effects including seizures.

Lignocaine hydrochloride, with or without adrenaline, is the commonest local anaesthetic agent used in plastic surgery. True or false? It certainly was for me during my clinical professional lifetime. But how many know about, inform patients about and are also able to deal with, two lethal complications that can occur with this drug? What are the mechanisms by which patients develop convulsions after the administration of lignocaine parenterally? Toxic or allergic. The toxic reactions might be drug over-dosage, rapid absorption or accidental intravenous injection. The allergic reactions maybe either type I, an immediate, anaphylactic reaction mediated by IgE antibodies, or type IV, a delayed hypersensitivity reaction mediated by sensitised lymphocytes.

Regarding over-dosage, there has been considerable debate in the literature regarding the safe maximum total dosage and confusion arises when looking at the dosages used by some dermatologists when performing liposuction. Much higher dosages are quoted than when lignocaine and adrenaline are used for field infiltration before a surgical intervention (which is not going to directly decrease the amount of infused agent). In the Klein technique dosages as high as 55mg/kg body weight of lignocaine are quoted whereas in standard infiltrative techniques 7mg/kg of lignocaine and adrenaline are routinely advised. If adrenaline is not used, the total dosage recommended falls to 4mg/kg. Irrespective of what total dose is given it is always possible to accidentally inject intravenously and this can give rise to a toxic concentration of lignocaine.

So with anaphylaxis or acute toxicity what are the clinical signs and symptoms? These are of course various but both can cause CNS effects with convulsions occurring. Returning to this tragic case, how much pethidine and how much lignocaine had Zoey been given in the FIVE minutes before Dr Wong made the first skin incision? This also raises the point, how long should a surgeon wait after infiltrating with a lignocaine and adrenaline solution before commencing surgery? And what is the wait for? Analgesia or ischaemia? I was always taught, and in in return always taught, wait for seven minutes before putting knife to skin.

The accompanying photo is taken from the record read out in Coroner’s inquest which details the amount of lignocaine and adrenaline used. 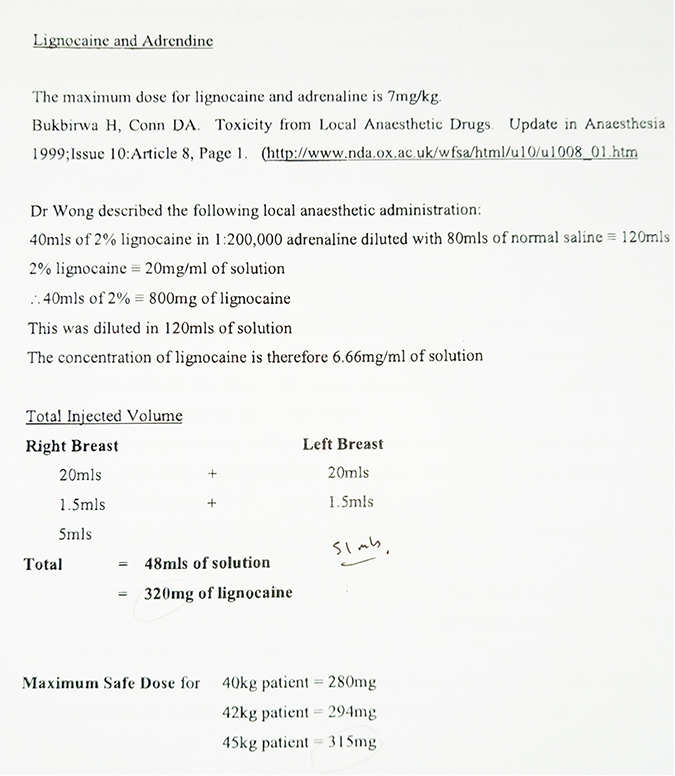 So back to the convulsing patient. Irrespective of the cause of convulsion what is the treatment? I am very grateful to Makund Jagannathan who has described the successful outcome following such an event occurring. The situation was somewhat different in that liposuction was being performed but the lifesaving factor was that this was not a case of the surgeon giving the concurrent anaesthesia, there was an anaesthetist present who was able to intubate the patient.

So why did Zoey die? Let us look at that next week. In the meantime, keep safe and keep your patients safe. A patient’s life is worth immeasurably more than a few pounds or dollars in your pocket.