The junior doctors in the UK are facing the reality that if they hold steady there is the very real prospect that ‘an elite group of professional people’ can topple a corrupt and dishonest Government and restore the balance of a professional regulatory authority. Today, 20 April 2016, I was reminded of a posting I made on this same day in 2014. This was the comment: “How did it happen? It is a top down phenomenon. When the Medical Council of Hong Kong sold it’s soul to the Darkside; protecting the inner circle of rich, privileged elite, in an old schoolboys club atmosphere with no regard for justice, no regard for protecting the public, scant regard for maintaining professionalism. When the Hospital Authority acts as a law unto itself and promotes patient suffering as a preferable course of action to clinical governance and honesty. When greed, jealousy and envy drive specialists to make false and misleading claims that reflect NO concern for patient safety or professional behaviour, oh and they are supported by the Medical Council in their dishonesty. These are just a few of the major things that erode the core values of the medical profession: to CURE when possible, to COMFORT when appropriate and to CARE always.

For those who do CARE there is work to be done.”

Now that was a response to an article that was contemporaneously posted on Facebook( http://www.thedailybeast.com/articles/2014/04/14/how-being-a-doctor-became-the-most-miserable-profession.html) How Being a Doctor Became the Most Miserable Profession. 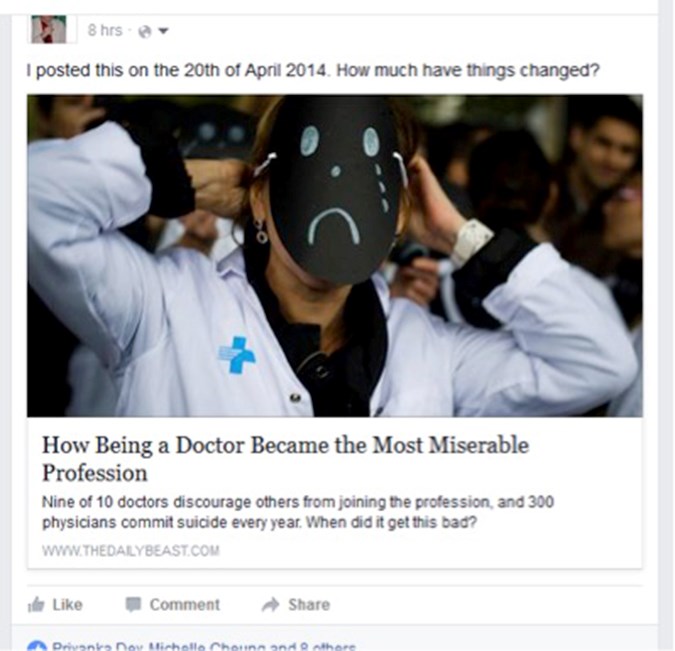 So two years later, are things any better? In the UK? In Hong Kong? It is really amusing to read of the squeals of protest from the Chinese ‘Hunts’ who are actually doctors. They are terrified about the prospect of being held accountable for their actions. They are terrified of competition. They conspire to defraud the public through the inability or deliberate refusal of the Medical Council of Hong Kong (MCHK) to regulate the profession. Doctors are exempt from the Fair Trade Descriptions Ordinance which is enforced by another legislative authority, I believe Customs and Excise. (Please correct me if I am wrong by the way.) The Medical Council of Hong Kong is expected to regulate the profession to perform in the best interests of the society it serves. It emphatically does not.

So back to Zoey. I intend to demonstrate that the MCHK is party to unlawful death in Hong Kong. She was not the first to die in a shabby, ill-equipped, arcade clinic at the hands of a doctor who gambled with death. How else can you describe what happened? At around 15:15 on 30 April 2010, Ms Leung Kwan Zoey, nervously and with the typical Hong Kong female shyness entered the operating room of Dr Wong Kar-mau. He had met her some days before, actually, on 17 April 2010.

She had been speaking to a beauty therapist about her upcoming birthday and her wish to give her boyfriend a present! Herself with larger breasts. The therapist and Zoey chatted about various things and of course the inevitable question, how much and how to choose a surgeon?

Zoey did not have a lot of money but thought she could scrape together around HK$30,000 (around £2,700) which was the ballpark figure the therapist mentioned.  And what about the surgeon? Who knows how the connection was made but Zoey went next door to the clinic of Dr Wong Kar-mau, who just happened to be the husband of the manager of the beauty parlour. HK$30,000 just covered the basic package; no anaesthetist, no hospital bed, ‘conscious sedation’ in the clinic. This was ‘counselling’ or as some might call it, ‘marketing’. So ‘all necessary’ consent forms were signed and here we are at 15:15, the patient being ‘marked, prepped and draped’. What follows is a cropped picture of the original report read out in the coroner’s court: 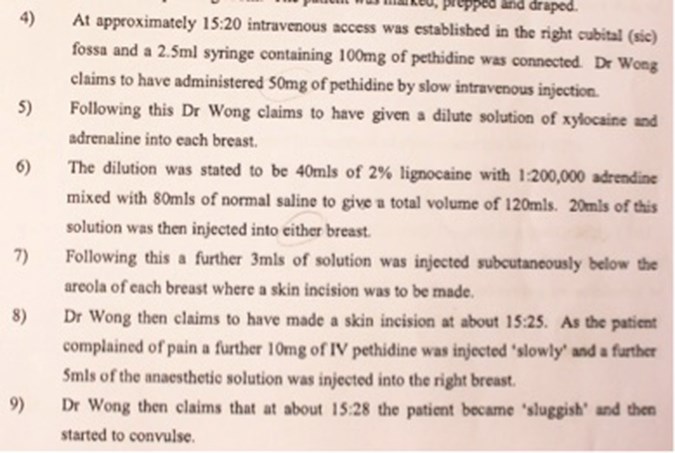 So what do you think so far? What is going on? Why should she start to convulse? If you were in this situation, what would you do?