Should we be astonished to hear that the Right Honourable Jeremy Hunt, the Health Secretary who has created the greatest manpower crisis in the NHS in the past fifty years should now say that he is not actually an academic and does not understand the papers on which he was basing his health policy?! But then should we be equally astonished to hear Dr Choi Kin, Chairman of the Preliminary Investigation Committee of the Medical Council of Hong Kong speak of his ambition to be, once again, the President of the Hong Kong Medical Association. It is obvious that Choi Kin has no sense of ethics or professionalism and for such a person to hold a key role in the regulatory authority for doctors in Hong Kong shows just how far the medical profession in this ex British colony has strayed from the path of responsible accountability. No wonder then that patients’ lives are at risk and so it becomes the duty and responsibility of the informed and educated to do what they can to restore some semblance of duty of care.

I have been looking at the death of Zoey Leung, a twenty-four-year-old girl who died following a catastrophic and completely preventable medical event in a Jordan clinic six years ago this month. The cover up has been shameful and whilst there is no way that Zoey can be brought back, her death is made even worse if it is not discussed openly and honestly. Lessons can and should be learnt and rules and regulations established to prevent such a tragedy from recurring. I name names, not to shame or embarrass but to give the necessary credence to a historical event. In the previous blog we had left Zoey convulsing after having a cocktail of drugs; intravenous pethidine and subcutaneous infiltration of lignocaine and adrenaline. Was the convulsion due to anaphylaxis or toxicity? If toxicity, was it due to over dosage or accidental intravascular injection? Well, how can we determine if the recommended dosage of 7mg/kg of lignocaine and adrenaline was exceeded? Of note, the defence expert, Dr Brian Tomlinson, Professor of Medicine and Therapeutics of the Department of Medicine and Therapeutics of the Chinese University of Hong Kong agrees in paragraphs 14 and 21 of his report that this is the maximum recommended dose. So how can we assess whether the 320mg of lignocaine that Zoey received was appropriate? Well we need to know her weight.

Herein lies the first and most obvious misdirection by the defence team. Professor Tomlinson acknowledges that there was no record of the bodyweight of the patient in any of the documents he received but mentions that the figure of 50kg was mentioned in my report. What did I actually say in my report? The figure is taken from the report that was read out at the inquest: 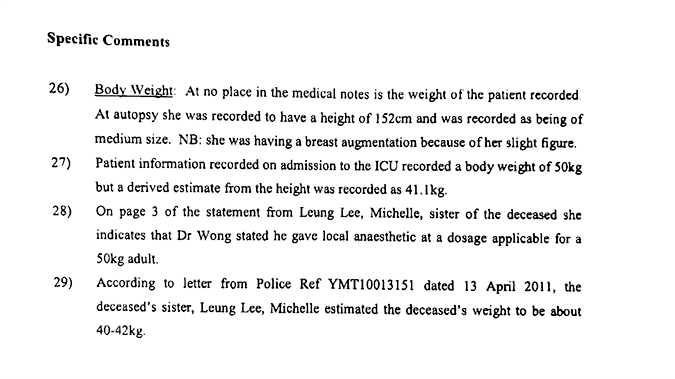 The figure of 50kg came from the referring doctor, Dr Wong Kar-mau. He had, however, never weighed the patient. The derived weight from her body length and confirmed by her sister was between 40 and 42kg. Professor Tomlinson, in paragraph 13 of his report suggested that using a body mass index (BMI) her weight should be 46.2-50.8kg. So he ignores the sister’s estimate; he ignores the recorded estimate in the ICU medical records and comes up with a derived figure based on two unknown variables, BMI and body weight. He indicates that the BMI of an average weight female in Hong Kong should be 20-22kg/m2. In fact, the range used in Hong Kong is 18.5-22.9 kg/m2 and Zoey was certainly at the lower end.

I do not know if Professor Tomlinson was trying to deliberately misdirect / confuse the coroner but there can be no support from the available evidence for his stated conclusion (para 27) that: “The overall dosage of lignocaine used for local anaesthesia was within recommended limits.” It was not. Of note, the highly detailed report from Professor Tomlinson going into the (irrelevant) complex pharmaco-kinetics of lignocaine metabolism was submitted to the court two days before the inquest, allowing no opportunity for an independent review. There is only one point from his expert opinion with which I agree; the timing of the convulsion suggests an inadvertent intravascular injection of the final 5ml of anaesthetic solution given. So let me leave this blog with this question hanging in the air: when using a onetime administration of large volumes of anaesthetic solution with a recommended maximum dosage based on the weight of the patient, is it negligent not to weigh the patient? To be fair, and this is what we are about, I shall ask Brian if he is prepared to comment and perhaps reconsider his opinion. In the meantime, irrespective of the cause, start thinking about what you would do if you are faced with a convulsing patient in your office / clinic.