If a person is snoring that means they are breathing. If they are breathing and their skin is of a normal colour does that not suggest that they are oxygenating the tissues? This was the situation described by the support staff who were tidying up the operating room and observing the patient. All sedation had been stopped over 30 minutes before when the surgical procedure was over. The patient lay, in a prone position, in no apparent distress, and was snoring. It was noted that her exposed skin colour appeared normal. And then she suddenly stopped snoring. She was unrousable. It was difficult to feel a pulse. Her upper airway was explored but there was no blockage and then she started to turn blue. Post-mortem toxicology reported no active drugs in the system. And the cause of death could not be determined.

So how does this fit in with the prosecution case?
The prosecution case is that the patient was so heavily sedated during the operation that she developed a suppression of her respiratory drive leading to a progressive hypoxia. This was compatible with survival of over 30 minutes with no active medication. It was compatible with regular breathing and oxygenation as evidenced by the snoring and the normal skin colour. And this led to a cardiac arrest and death.

I am not an expert in snoring, but I began to ponder: what does snoring say to us? Snoring is a form of communication and there must be experts out there who can ‘read’ the snore. The equivalent is when I used to take my juniors and ask them to read the wounds of patients. I have had feedback from a clinical nurse anaesthetist that they appreciated the snore of a sleeping patient as different from that of an unconscious patient. But they had no idea if this has ever been objectively quantified.

I started to search the internet for the forensic significance of snoring and reported in a LinkedIn posting; this cross posting is a little seductive but also instructive:

“What do I want to talk about?
Honesty.
What does this mean? It is an interesting term that suggests some universal standard like "love". In fact it is regarded as a virtue and one very good description comes from a fascinating paper in Metaphilosophy (Wilson, Alan T. "Honesty as a Virtue." Metaphilosophy 49.3 (2018): 262-280):
"Honesty is a moral virtue when the motivation to avoid deception is grounded in a morally valuable underlying motivation, such as the motivation to protect and promote well-being or the motivation to ensure fairness."

It is obvious that it is an imperative that all doctors who are invited or requested to give an opinion on medical matters should be honest. So let me be honest here. I am not an expert in snoring and certainly not when it comes to the forensic pathology of snoring.

There is a book, "Forensic Pathology in Criminal and Civil Cases." The authors are, Cyril H. Wecht, Michael A. Graham, and Randy L. Hanzlick. Chapter 19 is titled, "The agonal period; events, activity and pain" In that chapter snoring is mentioned as an agonal event. Such is the level of intrigue that I have ordered the book on Amazon but in the meantime there must be experts on LInkedin who understand snoring far better than I do. So I will leave the critical question in the blog.”

And the book arrived. This is where I have a few photographs to draw out the drama. 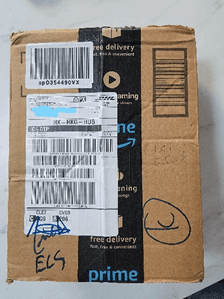 So the first picture is of the box. It arrived four days early. Amazing. I have to say that I very rarely order things online because of the delivery problems. But Amazon and books seem to be okay and so here I was with the classic text on forensic pathology. 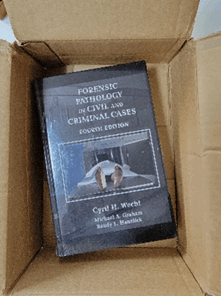 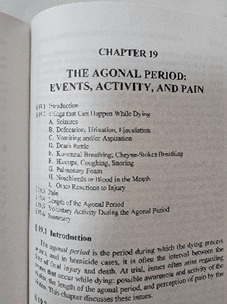 I turned to the relevant chapter (19) and skimmed down the contents. Things that can happen whilst dying and there it was: ‘F. Hiccups, Coughing, Snoring’ 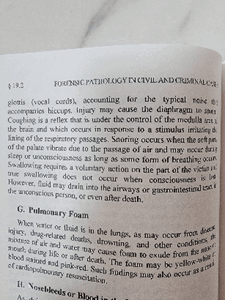 And at last, I read the authoritative account which says what?
Snoring can occur in the sleeping and in the unconscious patient so long as there is some form of breathing occurring.

So forensic pathology of snoring is on hold for the moment but my anaesthetic friend declared that their experience was that there was a qualitative difference in snoring in different conditions and directed me to look into the world of somnographic literature. On the way I was directed to this paper, ‘Kayabekir M, Yağanoğlu M. The relationship between snoring sounds and EEG signals on polysomnography. Sleep and Breathing 2021:1-8.’ A meeting abstract tantalizingly hidden behind a paywall but the title put me onto polysomnography. This is a form of sleep study that looks at multiple parameters including the EEG, ECG, pulse oximetry, muscle activity and eye movements. What about snoring? Well, it is mentioned that snoring can be recorded by a probe on the throat but more often is just recorded by the technician as being ‘mild’ ‘moderate’ or ‘severe’. This is not quite what I expected. I am looking for a more objective and detailed analysis of different types of snoring. The following paper looked promising:

Now a ‘Sleep Apnea Hypopnea Index’ is used to determine the severity of sleep apnea. The index is represented by the number of apnea and hypopnea events per hour of sleep. Apnea is clearly defined, a pause in breathing for at least 10 seconds and associated with a decrease in tissue oxygenation. Hypopnea is not so clearly defined. It literally means very shallow breathing and physiologically the effect is much the same as apnea. Obviously the higher the index the more the subject has been deprived of oxygen whilst they sleep. And that does have consequences. Sleep apnea is strongly correlated with the risk of ischaemic brain damage (a stroke). Stratifying risk is all part of the management of a disease which is why the index is important. But this paper is offering more. ‘ERB Correlation Dimension’; this is where things start to get a little complicated. ERB stands for ‘equivalent rectangular bandwidth’. This is a scale used in the discipline of psychoacoustics. ‘Psychoacoustics?’ I can hear you say. Indeed, something new to me and so off to Wikipedia. Psychoacoustics is the branch of science that studies the psychological responses to sound including noise, speech and music. I scroll down through some pretty amazing stuff and then come to a section on ‘psychoacoustic topics’ and scrolling down I came to equivalent rectangular bandwidth. I clicked on the link and what came up was so gloriously out of my world that I feel it deserves a complete quote:

So, we live and learn, and learn sometimes that we have more learning to do. I suspect that the psychoacoustic study of the forensic significance of snoring is very possibly an uncharted area of science.

Is there an international consensus on the identification of the qualitative differences in the sound of snoring? Is there a bank of snoring sounds that can be accessed by forensic investigators? Could different snores be played to witnesses so that they could narrow down and confirm the specific snoring they heard? That might be highly relevant to the case of Dr Vanessa Kwan.

This does raise a point of law which I do find unsatisfactory. In medicine and indeed in medico-legal matters we hold the contemporaneous documentation as being the most reflective of the truth and yet this is not so in the Law. “Witness statements will only be accepted as evidence by the court when the witnesses (who are the authors of these statements) confirm the contents to be true on oath in court at the trial.” (https://www.clic.org.hk/en/topics/civilCase/preparing_for_court_trial/q2)

So, it is theoretically possible that the statement heard in court, many years after an event, by the Jury, may be very different from the statement given to the police within days of an event. And yet, from a medical point of view, we favour the information we can extract from the most contemporaneous of observations.

The relevance of this observation relates to the timeline. This is so important that I will leave it to the next blog (23b).