Treating the male patient with dermal fillers
By Vincent Wong

Concepts of beauty and attractiveness have always been associated with the appreciation of symmetry, balance and harmony of various facial features. An attractive face creates mystique and power. Its effects are undeniable, and for centuries, we have been trying to measure and enhance faces to meet the standards of beauty dictated by society.

Sexual dimorphism (the phenotypic differences between the sexes) is often less obvious when it comes to facial structure. However, the approach to male aesthetics is different to that of female. In the initial stages of facial development, all human faces begin as essentially feminine, even if genetically male [1]. Through multiple exposures to testosterone during puberty, the male face gradually transforms into the male configuration. Hence it is of utmost importance that we understand sexual dimorphism and have a profound appreciation of male and female beauty. In 2014, Dr Stephen Marquardt developed the male variant of his Phi Mask, which was developed based on the golden ratio [2]. The male version describes the idealised male face and highlights the slight but significant differences between male and female faces. These differences include:

These days, more men are defying their age by turning to various aesthetic treatments, in search of a fresher version of their visage. From forehead sculpting to chin and jawline augmentation, male clients play an important role in this era of ‘Menaissance’. Here are a few treatments that would help enhance the masculinity of the face; while performing these it is important to remember and to respect the facial proportions.

The male jawline is wide and well-defined with a large masseter bulk, giving it a squarer appearance [3,4]. From the frontal view, the angulation of the mandibular ramus is prominent and this should be in line (horizontally) with the corners of the mouth [3,4]. The male face also has a lower gonial angle compared to the female face in the profile view [4]. Most men are blunt at the angle of the jaw, partially due to thinning of the temporal-buccal fat pad. In this area, dermal fillers must be injected supraperiosteally to avoid important structures (e.g. parotid gland and ducts). This treatment will project the jaw laterally and strengthen the jawline, resulting in a square jaw which is desirable in a man.

In men, the lateral border of the chin should correlate with a vertical line dropped from the corner of the mouth. In the profile view, a line connecting the most prominent portion of the upper and lower lip should touch the pogonion (Riedel line). The lower lip should be 2-3mm posterior to the upper lip and the pogonion should never project beyond this line. We can elongate the chin or enhance its anterior projection with dermal fillers. Increasing the forward projection of the chin will also help tighten the skin around the jawline area. The lateral borders of the chin can also be enhanced, which would result in a squarer chin, as well as adding definition to the jawline.

Step by step guide: enhancing / restoring the borders of the chin

Step by step guide: anterior projection of the chin

Figure 2: Identifying the area of weakness in the lateral border of the chin. 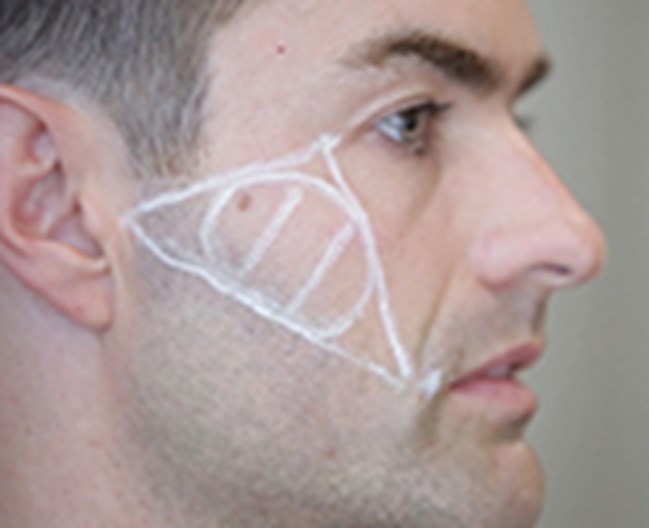 Cheek enhancement with dermal fillers is very popular amongst the female clientele in aesthetics. For male patients, however, this is an area that can often go wrong, where too much volume is placed resulting in a more feminine look. The male cheeks are flatter but more angulated when compared to female cheeks [5]. MRI studies have shown that whilst females have 1.5 times thicker subcutaneous fat compartment medially, male patients tend to have a uniform distribution [5,6]. The apex of the cheeks is also lower, more medial and subtly defined [5]. On the skin surface, the male apex can be located at the intersection between the alar-tragal line and a line dropped vertically down from the lateral canthus.

In a world where specific concepts of physical beauty in women are ever changing, idealisation of the male face has remained relatively stagnant. This is partially due to the fact that society places more emphasis on female beauty and there are more beauty products on the market targeted to women. However, more men are coming forward in the fight against ageing, resulting in a small but significant portion of the aesthetics clientele – which is predicted to continue growing in the coming years. The goal for male facial aesthetic treatments involves two important aspects: restoration and enhancement. Restoration is a cosmetic intervention to improve a facial area or structure that has changed due to the effects of ageing and the aim is rejuvenation [1]. On the other hand, enhancement is to improve a feature or an area to make the male face more attractive. Hence, the question we need to ask ourselves when analysing a male face is: should we restore or promote a cosmetic enhancement?