The medicinal leech (Hirudo medicinalis) has played a role in treating illness for over 3500 years [1]. It has survived rapid paradigm shifts in medical sciences and knowledge. In Ancient Rome, the use of leeches for bloodletting was propagated by Galen’s ‘humoral concept of disease’ in which illness was thought to be due to an imbalance in one of the four bodily humors (blood, yellow or red bile, black bile and phlegm). Bloodletting, particularly during periods of ‘plethora’, ‘congestion’ or ‘inflammation’ was thought to relieve the body of excess blood and thus restore equilibrium for optimum bodily function [2].

So popular was the practice of bloodletting during the late 18th and early 19th century that governments across Europe made significant investments into the development of leech farms, while leeches were often trafficked across the world to meet rising demands [3]. The late 19th century brought major advancements in the fields of physiology, pathology and therapeutics and the use of medicinal leech therapy fell out of favour. However, scientific interest in leeches, particularly in the biological properties of their saliva did not disappear and the leech has since established several new niches. In plastic and reconstructive surgery medicinal leeches have been used to augment venous outflow in congested microvascular and pedicled flaps [3] as well as in distal body parts including digits, nipples and ears. There has even been a report of its successful but unconventional use in the management of a digital paronychia [4].

It is interesting to note that it is only relatively recently that the Food and Drug Administration (FDA) of the United States approved the leech as a medical device in 2004. The medicinal variant, Hirudo Medicinalis, is protected under international law by its inclusion in the listing on appendix II of the Convention on International Trade in Endangered Species of Wild Fauna and Flora and in the United Kingdom under Schedule 5 of the Wildlife and Countryside Act 1981. 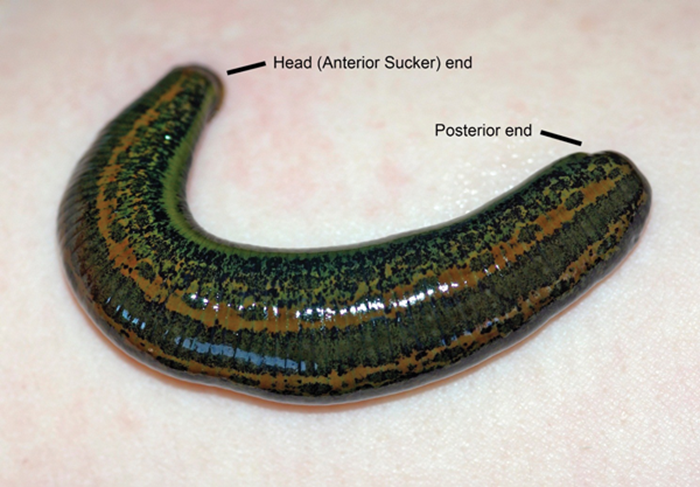 Leeches belong to the phylum Annelida (segmented worms). Over 700 species have been discovered to date, yet it is one – H. Medicinalis – whose use predominates in medicine. Biopharm, a company based in Wales, is the main supplier for the National Health Service (NHS). They breed their leeches in ‘warm rooms’ and despite being hermaphrodites, these worms copulate underwater before emerging on a daily basis to lay a cocoon up to five times a week for up to six weeks. The cocoons usually hatch after a period of three weeks producing live young. H. medicinalis measure on average 2.5-5cm in length and weigh 1-1.5g prior to feeding [3]. H. medicinalis has a posterior end which permits attachment via a sucker and allows it to crawl (Figure 1). The narrower, anterior, head end of the leech contains three jaws, configured in a well-recognised tri-radiate or ‘Mercedes Benz’ type pattern. Each jaw contains up to 70 pairs of horny, cutting teeth through which it can attach to its host to feed. After piercing the skin (Figure 2), adults are able to consume up to ten times their body weight in blood, an average of 5-15ml. The salivary gland secretion of the H. medicinalis leech contains a cocktail of up to 100 pharmacologically active proteins with anticoagulant, anti-inflammatory and anaesthetic properties. 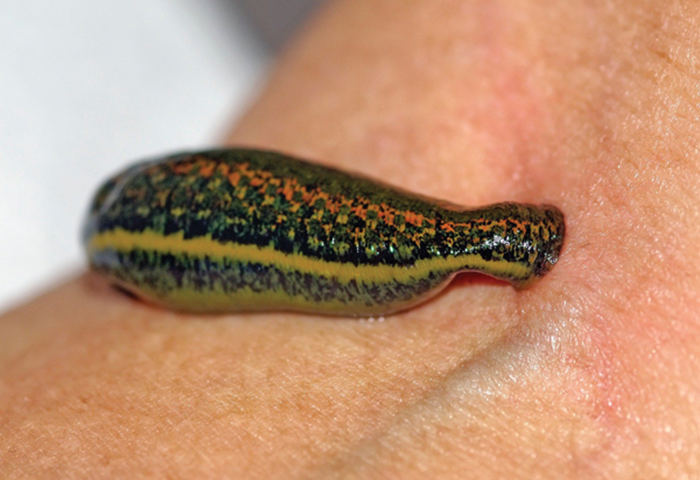 Figure 2: Image of an adult leech (Hirudo medicinalis) feeding via the anterior sucker. Leeches consume between 5-15mls of blood during a feeding episode. The consumed blood may remain within the digestive tract for up to one year protected from microbial decay. Image courtesy of Biopharm Leeches Limited.

The earliest descriptions of the anticoagulant properties of leech saliva were first published in 1883 [5] but it was not until 1955 that Hirudin was first isolated and characterised as an anticoagulant [6]. It is a direct inhibitor of thrombin, thereby inhibiting the conversion of fibrinogen and fibrin, and is known to have bacteriostatic properties [2]. Further isolated compounds include antiplatelet agents (apyrase and calin), anti-inflammatory agents (bdellins and eglins). Anaesthetic and anti-histamine-like agents ensure that any host does not feel the bite and attachment of the leech.

For the leech, the anti-coagulant and anti-microbial properties of their secretions serve to prevent microbial decay of the blood. Indeed, these measures are so effective that leeches can survive up to six months following a single meal. In a landmark paper written in English, Derganc and Zdravic reported the use of leeches in the management of venous congestion in 20 tubed pedicled flaps [7]. They reported complete restoration of circulation in 70% and partial improvement in the remainder of other flaps. Left untreated, venous congestion would have led to irreversible microcirculatory changes within hours [3] resulting in fibrin deposition, thrombosis, ischaemia and ultimately total or at least partial failure.

It is likely that the benefits of hirudotherapy are not limited to the direct decongestant effect of the leech withdrawing blood from a congested flap. The majority of the clinical benefit is likely to be due to the gentle continued oozing that occurs from the bite wound over the following 24-48 hours after the leech is removed. This continued decompression provides a bridging period during which there is enhanced oxygenation, wound healing and, most importantly, the development of collateral venous connections between the flap and the recipient bed.

There is a well-established body of clinical evidence which shows hirudotherapy is an effective treatment for venous congestion following replantation of extremities, cutaneous pedicled flaps and microvascular free tissue transfers. In a four year period in a single plastic surgery centre in the US, retrospective analysis of 35 patients who underwent leech therapy was performed. The most common indications were venous congestion in pedicled fasciocutaneous flaps and replants. The flap salvage rate was reported as 70% in replanted fingers and 77% in pedicled flaps [1]. Chepeha reported 100% flap survival in a retrospective analysis of eight patients who underwent hirudotherapy for venous congestion following free tissue transfers to the head and neck [8] while Herlin, in a systematic review reported free flap salvage rates of 65-80% [9].

“The ultimate goal would be to identify and produce some of these compounds so that we no longer need the leech itself.”

The face is essential for the expression of emotion, identity and communication. Reconstructive options following significant traumatic injuries are often never as satisfactory as microsurgical reconstruction with an amputated part. While arterial anastomoses are often met with success, the veins are often small, fragile, easily traumatised and often rendered unsuitable for anastomosis. One multicentre study described the authors’ experience with lip replantation following traumatic injury [10]. Leech therapy was applied in 11/13 patients in conjunction with medical anticoagulation and antispasmodic therapy to optimise conditions for establishment of collateral venous connections. Only one patient suffered partial lip loss, and all patients were pleased with the postoperative result. Cho et al. described the use of leeches to salvage a replanted ear [11]. Congestion was noted on the first postoperative day. A regimen of three leeches per day were used in addition to other adjucts. By day seven, venous congestion had resolved and the flap was healthy.

Complications, though rare, have been reported with medicinal leech therapy. Whitlock et al. noted an association between Aeromonas Hydrophil wound infections and leech therapy [12]. This commonly presents as cellulitis but tissue loss (including flap loss) and septicaemia have been reported [13]. Some studies indicate that prophylactic antibiotic coverage with agents such as Ciprofloxacin reduces the rate of infection by around 50% [1,14].

Patient acceptance is sometimes a barrier to therapy, particularly when sensitive regions of the body are involved (e.g. peri-orbital and peri-oral regions) or if utilised in the care of children [10]. There have been a number of reports of children being sedated during the course of leech therapy [3].

Prolonged slow blood loss instigated by leech therapy, while crucial for the decongestive effect in flaps, can be problematic. In one case series, the combined effect of daily leeching and anticoagulation necessitated transfusion in 4/11 patients [10]. By extension, bleeding diatheses are often viewed as a contraindication to leech therapy [3]. Other rare but reported adverse effects include acute renal failure [8] and anaphylaxis [2].

The future of hirudotherapy in plastic and reconstructive surgery

Medicinal leeches possess unique benefits in the salvage of congested flaps and replanted extremities. For outcomes to improve and for complications to be minimised, it is recognised that more evidence is needed regarding whether there is an optimum number of times leeches should be applied for a given size / volume of flap or the total duration of treatment. The currently available data is mainly small, retrospective studies but more systematic reviews are being conducted with the hope of creating more evidence-based protocols [9,15]. Research is also needed to elucidate the best concurrent medical therapy.

Most surgeons usually begin hirudotherapy after the perception that more conventional treatment methods such as warming, elevation, antiplatelet, anticoagulation and vasodilator agents are failing [16]. Are there markers or triggers that may better predict the need for leech therapy, and are there any medical therapies more useful in optimising success? There are other exciting prospects for the future of hirudotherapy. Research is ongoing to discover the properties and mechanisms of actions of the various proteins in leech saliva.

There may be bioactive compounds that can be isolated and developed into novel anti-thrombotic, anticoagulant and anti-inflammatory drugs which may be of use in the management of vascular disease and clotting disorders [2]. In reconstructive surgery, the ultimate goal would be to identify and produce some of these compounds so that we no longer need the leech itself, and therefore circumvent the issues of patient acceptability and scarring from the bites.

The ancient art of ‘bloodletting’ with leeches has endured for millennia and more recently has occupied a unique niche in the treatment of venous congestion in reconstructive surgery. The current body of literature indicates high salvage rates in flaps and replanted tissues affected by venous congestion. A number of questions regarding patient selection, optimum protocols for treatment and concurrent use of medical therapies remain to be answered. Nonetheless, an evidence-based unification of protocols does appear to be in the pipeline. Further elucidation of the properties of leech saliva holds exciting prospects for drug development and could one day obviate the need for the leeches themselves.