Filler complications: is there a way to prevent vascular compromise with 3D-anatomy?
By Gisella Criollo-Lamilla, Claudio DeLorenzi and Patrick Trevidic

The use of facial filler injections has increased dramatically over the last 10 years and so has the incidence of complications. The main and most serious adverse event is vascular compromise. The most feared consequences are devastating: blindness, skin necrosis and stroke. The physician should be able to recognise the first signs of complications and take an adequate management strategy to address them urgently.

The best approach is prevention and for us, the best prevention starts with a good knowledge of 3D-anatomy that will help us to avoid not only the dangerous areas and but also the dangerous plane.

The classical three main dangerous anatomical zones for filler injections referenced in the literature are the glabella and forehead, nasal and labial areas. The understanding of 3D-anatomy is essential to avoid vascular complications. In fact, vessels can travel through tissues at different depths along the same pathway (Figure 1). 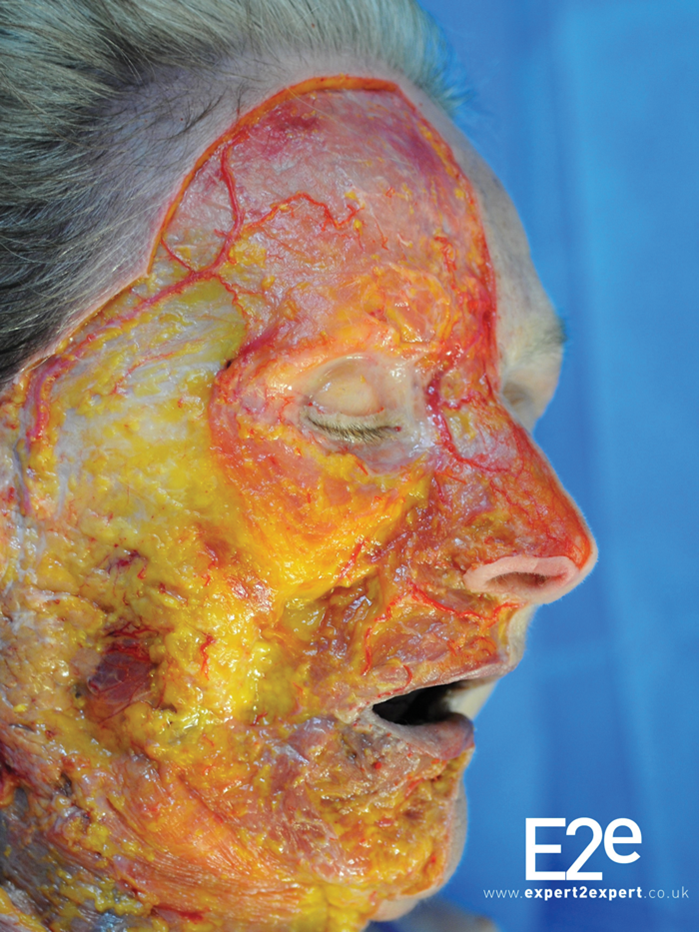 Figure 1: All vascularisation of the right side of the face after skin and superficial fat compartments removal.

a. The glabella and forehead area

The glabellar area, in particular, has limited or no collateral blood supply. Thus, any obstruction of the blood supply will tend to result in dermal injury. The overall pattern of the zones of injury seen in the glabella is typically vertical and fusiform, due to the orientation of the blood supply. In the lateral or mid-eyebrow region of the forehead, the zones of injury tend to be triangular in shape, with one point of the triangle inferiorly near the presumed area of obstruction, and spreading in a triangular shape towards the hairline [1].

Several studies have showed that the glabella was the most common filler injection site triggering blindness [2].

This embolism is associated with retrograde blood flow, through the anastomoses between the supraorbital, supratrochlear and ophthalmic arteries, provoked by strong pressure exerted on the syringe piston, leading to immediate and nearly always irreversible blindness in the affected eye [1-2].

The vascular anatomy of the glabella and forehead

Ophthalmic artery branches, derived from internal carotid artery, and the frontal branch of the superficial temporal artery, originated from external carotid artery, provide cutaneous blood supply to the forehead, glabella, nose and periorbital region. The supraorbital, supratrochlear, central retinal and dorsal nasal arteries are some of the branches of the ophthalmic artery (Figure 2).

The supratrochlear artery exits the superomedial orbit through the frontal notch, traverses the corrugator muscle and travels upwards deep to the orbicularis oculi and frontalis muscles. Approximately 15 to 25mm above the orbital rim, the artery pierces these two last muscles to run into the subcutaneous plane [2].

The supraorbital artery emerges from the orbit through the supraorbital foramen and divides into superficial and deep branches. The superficial branch runs upwards and pierces the frontalis muscle and galea aponeurotica, 20 to 40mm according to some authors [1-3] and 15 to 20mm according others [4] above the orbital rim to becoming subcutaneous. The deep branch runs laterally above the periosteum to supply the pericranium of the superior orbital rim. The supraorbital artery anastomoses with the supratrochlear, angular and dorsal nasal arteries and with the frontal branch of the superficial temporal artery.

This region of 15mm just above the supraorbital rim is thus a high-risk zone because of these blood vessels. At vertical levels above this area, the subgaleal tissues are low-risk, because they are relatively avascular. In other words, the lower risk strategy involves injecting deep in the upper forehead (below the galea) and injecting very superficially in the lowest zone, and taking extra precautions in the deep to superficial vascular transition zone.

b. The nasal area

Several publications reported the nasal area as the main cause of tissue necrosis and the second cause of visual loss after the glabella zone [5].

The entire nasal area, and in particular the dorsum and radix, are high-risk zones. The rich communication between the external and internal carotid vascular network in these regions constitutes a danger of embolisation towards the central retinal artery (with its risk of blindness) or towards other intracerebral arteries (with the risk of stroke) [1,6,7] by retrograde propagation mechanism from the filler injection site.

The nose is another special region where blood can be supplied by the internal, the external carotid arteries or most commonly by both (Figure 3). 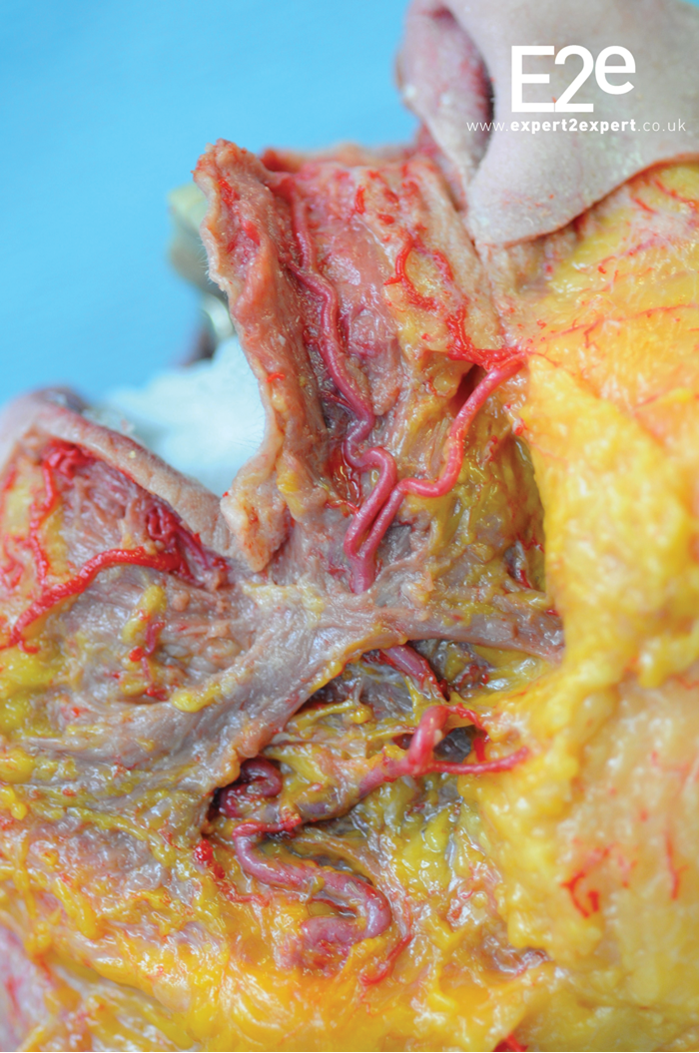 Figure 3: Vascularisation of the nose with the subalar artery and the lateral nasal artery going to tip.

The facial artery (external carotid system), as it passes the nostril, gives off the subalar or inferior alar artery but sometimes the latter arises from the superior labial artery [8]. Supplying the nasal ala with branches that become more superficial, the subalar artery also participates in the rich arterial anastomotic system of the upper lip [9]. Because of its anatomical position in the upper third of the nasolabial fold (NLF), the subalar artery constitutes an anatomical danger zone for the filler injections often requested in this area of the face [1].

In its course towards the medial canthus of the eye along the lateral edge of the nose, the facial artery gives rise to the lateral nasal artery or superior alar artery, which can sometimes branch from the superior labial artery. This artery supplies the dorsum of the nose and nasal ala, and anastomoses with the arterial plexus of the nasal tip [1,6,8].

For some authors, the lateral nasal artery is the main terminal branch of the facial artery rather the angular artery, the latter being a small and thin artery [8-10].

For others [11] the angular artery is the main continuation of the facial artery. It continues its course in the nasojugal fold above the levator labii superioris alaeque nasi and orbicularis oculi muscles. While running towards the inner angle of the eye, the angular artery runs just below the tear trough, and then passes between the two insertion heads of the depressor supercilii muscle, becoming deeper, and finally anastomosing with the dorsal nasal artery, a branch of the ophthalmic artery.

The dorsal nasal artery, branch of the ophthalmic artery (internal carotid vascular network), emerges from the orbit and gives off a collateral branch to the lacrimal sac before dividing into two branches: (i) one anastomoses with the angular artery and (ii) the other runs along the nasal dorsum. Rich anastomoses with the supratrochlear, contralateral nasal dorsal and lateral nasal (a branch of the facial artery) arteries supply the nasal bridge and nasal dorsum [1].

Since the vascular network of the nose is superficial, and beneath the dermis, filler injections should be performed deep to the musculoaponeurotic layers, in the preperichondrial and preperiosteal planes to avoid injury or cannulation of vessels. It is recommended to inject small amounts of fillers with extreme caution in patients with previous rhinoplasties since the anatomy could have been modified and the residual sclerosis makes the vessels less mobile in their environment which increases the risk of being cannulised [13].

When injecting, block distal vascular flow with your non-dominant hand.

Small amounts of filler typically only affect the lip itself. Larger volumes can cause serious degrees of obstruction because of retrograde (proximal) flow to the facial artery. Typical patterns of injury involve the upper and lower lip and the ipsilateral nasal area. Several normal variants of the superior labial artery have branches, either single or paired, to the nose. Thus some injections of the upper lip can paradoxically show an injury to the nose as a result of one of these branches (the columella, alae, or both) [1].

The labial area is usually [9] divided into the upper and lower labial areas, but we shall consider them as one region, since they each show similar patterns of injury (Figure 4). 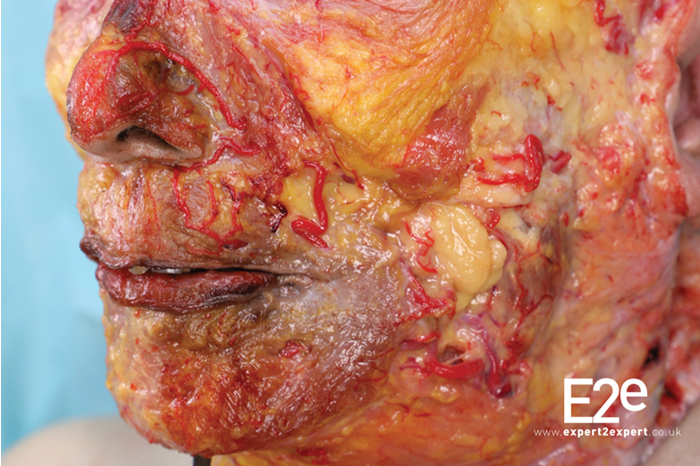 Figure 4: Vascularisation of the labial area with the inferior and superior labial artery coming from the facial artery.

The inferior labial artery arises from the facial artery, generally at the level of the labial commissure, but higher or lower in certain cases [9]. It passes behind the depressor anguli oris muscle and enters the lower lip travelling between the mucosa and orbicularis oris muscle [12] along the level of the lower lip vermilion-cutaneous border [2] towards the midline to anastomoses with its homologue from the opposite side [14]. The superior labial artery branches from the facial artery generally at the labial commissure, superior or inferior to the latter. It runs towards the midline between the orbicularis oris muscle and the mucosa usually superior to the vermilion border, at a depth of about 3 to 7.6mm to skin, until just before approaching Cupid’s bow where it becomes inferior to the border [1-2]. It anastomoses with its counterpart and forms a rich arterial arch. Several superficial ascending branches (to the skin) and deep ascending branches (to the mucosa) arise from this network, including the septal arteries, located on either side of the philtrum to anastomose with the subalar and columellar arteries.

The labial arteries travel in the region of the red lip posterior to the wet-dry line. Typically, the vessel is more often found within the orbicularis oris muscle within the central third of the lip. The artery is relatively close to the mucosa (particularly in the lateral thirds), and thus it is clearly in the high-risk zone whenever filler is injected into the area posterior to the wet-dry line in efforts to evert the lip. When performing filler injection, it is more important to keep in mind the depth than the height of the artery.

Over the last decade the use of facial filler injections for minimally invasive rejuvenation has been steadily increasing with the consequent increase in their unpredictable adverse events. Vascular complication can occur even when being careful and taking into account rules of safe injection: the use of a cannula is better than a needle in a dangerous 3D-anatomy, cannula / needle is withdrawn as the filler is injected depositing small amounts, injecting slowly ensuring to keep the cannula / needle in constant motion, maintaining a low pressure on the plunger of the syringe.

Although loss of vision is a rare complication after filler injections, it must be noted that this adverse event can happen at any time and it is usually devastating [15-16]. It is essential that the injector should be able to quickly recognise [17] complications and take an adequate management strategy but prevention is better and the best prevention is good knowledge of 3D-anatomy.