Following the widely reported death of a British patient undergoing the procedure, can there be a place for the ‘Brazilian Butt Lift’ in plastic surgery? Professor James Frame takes a look at this controversial topic.

Over recent years there has been adverse publicity within the media in response to deaths following the ‘Brazilian Butt Lift’ procedure in otherwise healthy young women [1,2,3]. These tragedies have highlighted the need for more stringent regulation within the cosmetic surgery industry and the regulatory bodies and insurance companies are taking this most seriously.

In fact, this procedure, if carried out for purely cosmetic procedures, cannot be covered by surgeons’ malpractice insurance and the procedure is still undergoing scrutiny, with a cautionary note from British Association of Plastic, Reconstructive & Aesthetic Surgeons (BAPRAS) and British Association of Aesthetic Plastic Surgeons (BAAPS) for its members not to perform the operation.

However, it is important to understand more about this procedure and the actual sequence of intraoperative events that may lead to fatal pulmonary fat embolism.

The term Brazilian Butt Lift is largely a misconception. The ideal for Brazilian women in their culture and social setting is to have full buttocks and this is regularly highlighted within their media. This has expanded to media highlighting of celebrities in mainstream television and glossy magazines. In fact, the appearance of the Brazilian buttock lift also can be created by non-surgical methods, including buttock isometric exercises according to the Brazilians themselves. The term Brazilian Butt Lift was created by the world-renowned expert ‘Butt Surgeon’, Tino Mendietta, a Brazilian and board-certified plastic surgeon practising out of the United States.

Mendietta showed through regular lectures and publications how large volume fat graft can dramatically augment the buttock [4]. Mendietta presented his impressive results to the BAAPS in London some years ago and his lectures were extremely well received.

In strict terms, the Brazilian Butt Lift involves the harvesting of large volumes of fat, usually measured in litres, from the abdomen, waist, thighs, arms and, in fact, wherever fat can be harvested. In one of the fatal cases of a UK woman travelling abroad, the information sheet from the ‘clinic” stated that as much fat was transferred as possible in this procedure and injected under tension to overcompensate because the massively grafted buttocks were expected to lose volume over time! Fat grafts are just that, grafts. They do not take their vascular supply with them but have to develop new vascular connections at the recipient site. The fundamental biology is absolutely fascinating. Adipocytes are a heterogenous group of living cells that require a blood supply and are hierarchical in nature and function. Injecting under tension suggests a severely compromised revascularisation yet Mendietta showed great and reproducible results in this circumstance.

The recognition by Mendietta and others of variations in the shape of waist and thighs meant that an ‘A’, ‘V’ shaped midframe could be reshaped into classical female curves [5]. It is very unlikely that many UK trained surgeons have actually ever performed the procedure as described by Mendietta. The initial aggressive lipo-harvest will have risk of oil embolism in its own right, which may be asymptomatic or cause a mild confused state in the first few days postoperatively [6]. Large volume fat is harvested after tumescence and using a wide bore cannula, sucking fat under low pressure into a filter / separation system and then reinjected, almost neat, into the buttock. The plane of injection is important. Del Vecchio et al. have shown that fat injected directly into the gluteus maximus under pressure dissipates into the sub-gluteal space, possibly damaging veins during the expansion and putting the patient at risk from particulate embolism, mainlining fat to the heart and lungs, leading to fatal cardiac arrest, usually during the procedure.

Their conclusion is that fat should always be injected subcutaneously to remove this risk [7]. This may be a practical impossibility if larger volumes are to be injected and perhaps it may be wishful thinking to hope that no fat will enter the gluteus maximus, but their results from large volume intramuscular injection were mirrored in our own cadaveric studies at The School of Medicine at the Anglia Ruskin University [8].

‘Aesthetica’ is the term used to describe the use of aesthetic surgery techniques to help people with disease or deformity. Not all patients wanting or needing fat graft to the buttock are women. Not all patients wanting fat graft are cosmetic surgery patients. Fat grafting large volumes of fat into otherwise normal buttocks is not encouraged or supported by any of the UK’s national associations of plastic surgery. However, there may be clinical indications on a case by case basis, provided that fully informed consent is achieved, the hospital has approved the procedure after being alerted to the clinical indications and the surgeon has relevant malpractice insurance.

Experienced plastic surgeons should be included in the regulatory process but sadly this is not the case. In practice, very few UK plastic surgeons have performed this procedure, yet we expect trainee plastic surgeons to be competent in all aesthetic techniques. Fat grafting buttocks has clinical indications and trainees should at least have some exposure to this procedure to practise aesthetica to benefit some NHS patients.

In massive weight loss the buttock loses all shape and it becomes a practical problem wearing trousers if they are continuously falling down. The option for buttock augmentation includes silicone implants, but in weight loss patients there is hardly any subcutaneous buttock fat and therefore the implants have to be placed in an intramuscular plane. The problem then is that there is a contour defect in the lower buttock because the buttock crease is significantly lower than the lower border of gluteus maximus. If the implants are inserted below the gluteus maximus they gravitate and sublax inferiorly causing considerable contour defect and dual plane is not advised. 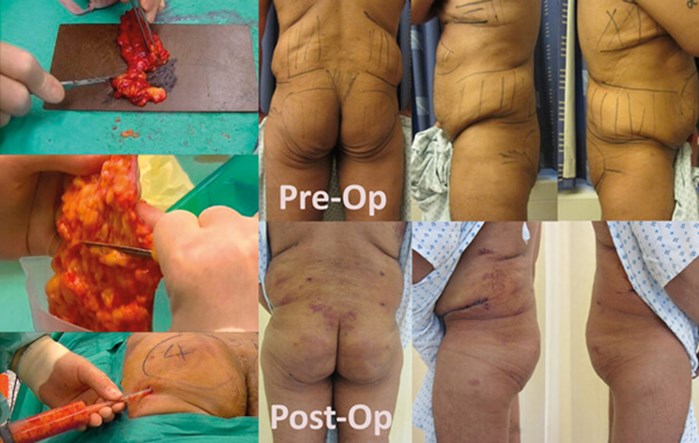 Figures 1 and 2: Fat graft harvested from abdomen wall pannus in massive weight loss patient. The fat is diced from the deep surface up to the cutaneous pannus, scraped into a 50cc bladder syringe and injected via a large bore cannula. A large flexible catheter with introducer was used in this case as a single pass to position the graft in the gluteus maximus muscle. No blood draw back is obvious prior to injection and the fat dissipates throughout the tissue planes of the muscle. It is accepted that this fibro-fat must not be injected further into the muscle once tissue tension is realised.

This means that fat graft is a better option and in patients undergoing abdominoplasty the fat can be diced off the pannus. Experienced surgeons are well aware that lipo-harvest of fat in weight loss patients is far from productive. In the 1970s large buried blocks of dermofat harvested from the abdomen were the preferred method for buttock augmentation but these were prone to calcify and go hard. The idea of dicing the fibrofat pannus is to reduce solidity in the event of calcification (Figures 1 and 2). Large bore cannula harvest of fat has been shown to have good survival potential in buttocks and there are no reports of calcification within such grafts in the literature.

As explained previously, the Brazilian Butt Lift involves large volumes of fat injected into the buttcks under pressure into and around the gluteus maximus muscle. This creates the risk environment of fat embolism as the fat is squeezed under pressure through the deep surface of the muscle into the sub-gluteal space. The emphasis is ‘pressure’ because large volumes injected into a closed space with limited capacity will put thin walled veins under tension and risk rupture. The gluteal veins are vulnerable. It is well known that fat injected into muscle has good take, as evidenced in breast reconstruction where the maximum volume for injecting is generally accepted as only 200mls per session.

There is some evidence that repeated small volume fat injections have better survival rates than a single episode, large volume injectate anyway. Specifically, with buttock augmentation using fat graft, the area of volume expansion to give best projection is in the upper and mid buttock. This is compatible with an expanded gluteus maximus when fat is injected into the gluteus maximus muscle itself. To augment the lower buttock the fat has to be injected subcutaneously because this is below the lower free border of gluteus maximus. The concept of 3D layering large volumes of fat into a thin subcutaneous fat layer over the whole buttock is optimistic to say the least and actually more likely to put the patient at risk of oiloma’s and infection. Mortality has been reported from synergistic gangrene [9]. 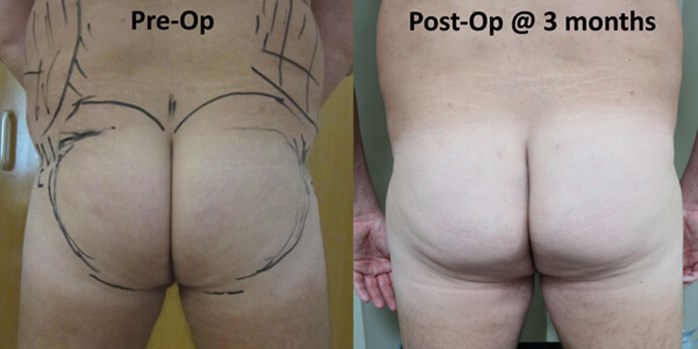 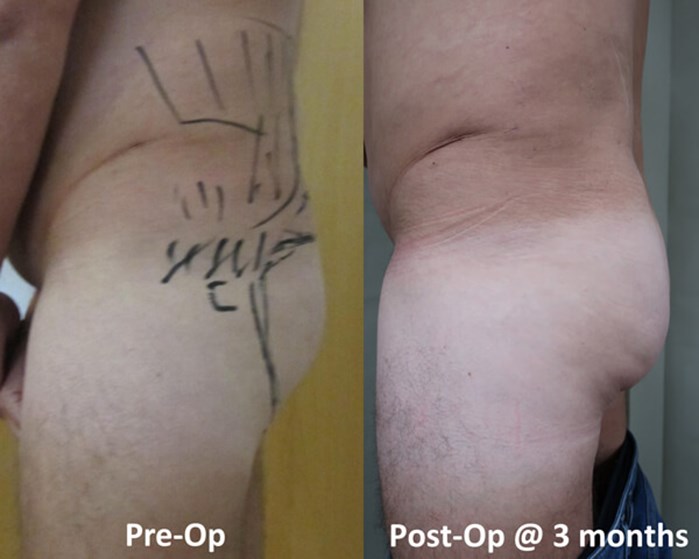 Figures 3 and 4: Pre and postoperative anteroposterior (AP) and lateral clinical photographs of a 40-year-old man having fat graft to buttocks to improve wellbeing following weight loss. The patient has loss of gluteal projection. Braces were impractical and he was dramatically losing self-confidence in his marital relationship and in front of his young son. Autologous fat has been injected into gluteus maximus in the upper and middle buttock and subcutaneously into the lower buttock just above the gluteal skin fold.

Realistically, therefore, the best results will be achieved by combining intra- muscular and subcutaneous techniques. For aesthetica, the suggested maximum volume of fat injection into each gluteus maximus should be 200 to 300mls and even then, the fat must not be injected under any pressure and the portal for injection must be from above or laterally. Injecting inferiorly from the gluteal fold upwards is deemed risky because of ease of injecting directly into the sub-gluteal space. Always attempt aspiration prior to injection to avoid direct venous inoculation. Results can be amazing (Figures 3 and 4).