Emerging trends in the aesthetics of rhinoplasty: from local to global
By Pietro Palma, Iman Khodaei, Irina Vasilenko

The concept of ‘beauty’ can be bewildering in its scope and variation through time and geographical location. As the aim of facial plastic surgery consists of restoration of form and function, the definition of beauty takes on immense importance.

Although art history seems to suggest that the concept of beauty has been extremely variable, there are certain factors that have been common to many civilisations. These include the appearance of health, sexual maturity, and the significance of the gaze mechanism in social interaction [1-4].

The first significant steps in the evolution of our understanding of facial beauty were taken in Ancient Greece where the highly formalised art of previous civilisations was abandoned in favour of a more naturalistic depiction. However, the art of the ancient world often emphasised the importance of divinity, and exaggerated secondary sexual characteristics. An even more naturalistic attempt arrived during the Renaissance when artists such as Caravaggio invented the concept of ‘Chiaroscuro’, or light and shadow interplay, as a means of understanding the variability in human features. The advent of photography marked a clear break from the past and has now become the gold standard in providing the foundation for facial analysis, teaching, and the documentation of surgical results.

Despite these titanic changes in documenting the human face, or perhaps because of this evolutionary process, the science of anthropometrics gained momentum in the 20th century and provided a valid platform for facial plastic surgeons.

The overwhelming factor in changing our perception in the 20th and 21st centuries has been the dissemination of mass media, and the interaction of people across the globe through travel and the internet. This melange of ideals of beauty have now been homogenised for some, while for others, maintenance of their specific ‘racial’ attributes has become a political issue. Faced with such a rapidly dynamic field, the rhinoplasty surgeon needs to be highly conscious of the current trends in facial aesthetics and not impose his or her own rigid rules of surgery on the patient. Creating a tailor-made surgical game plan forms the foundation of successful rhinoplasty and the patient’s aims cannot be achieved without a sensitive and comprehensive understanding of these changes. 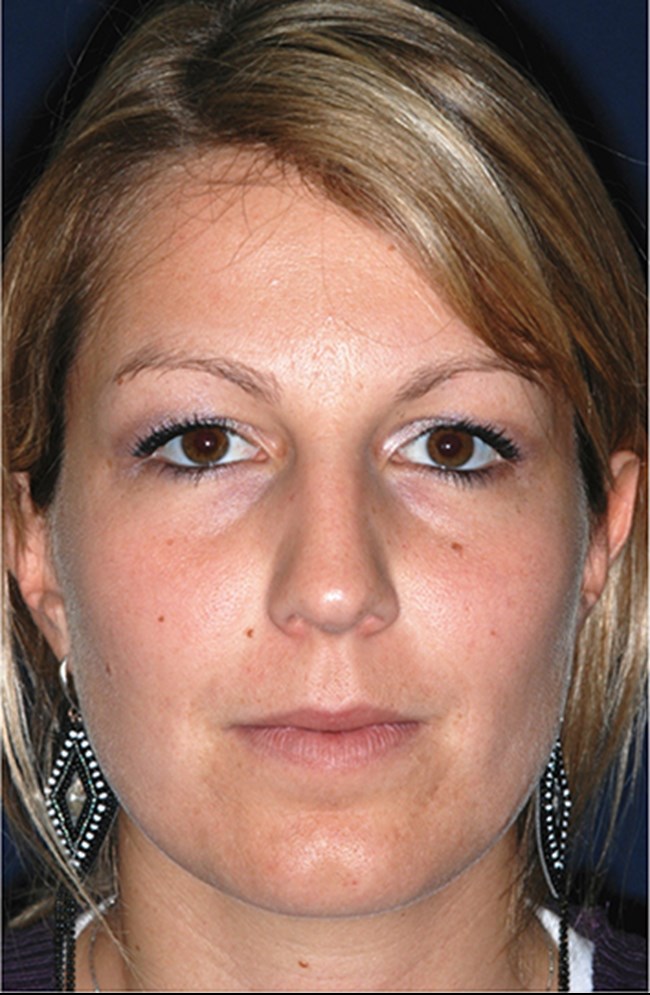 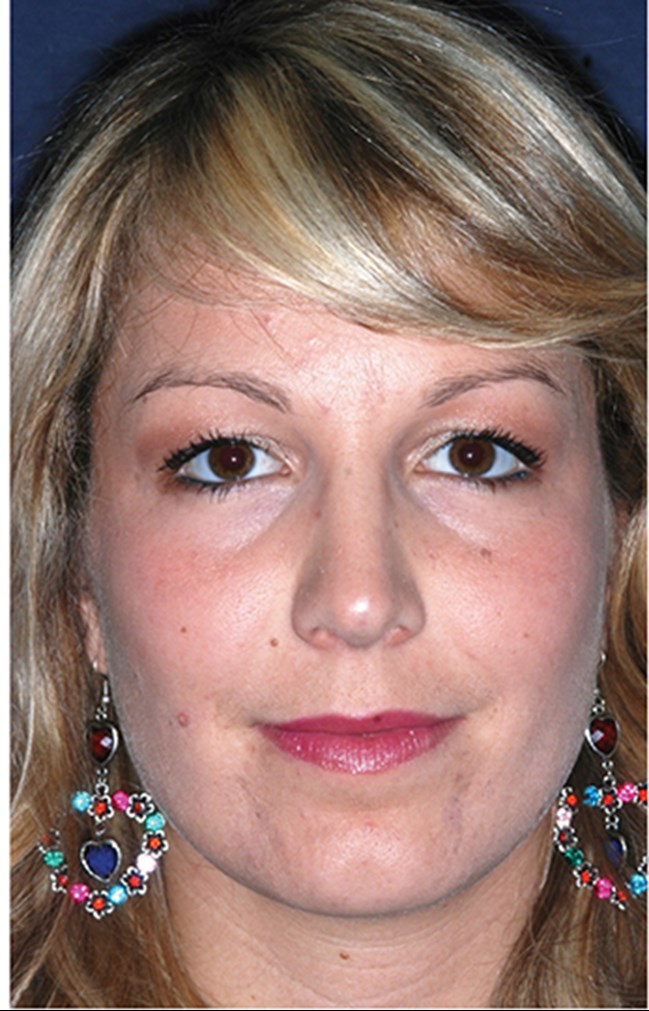 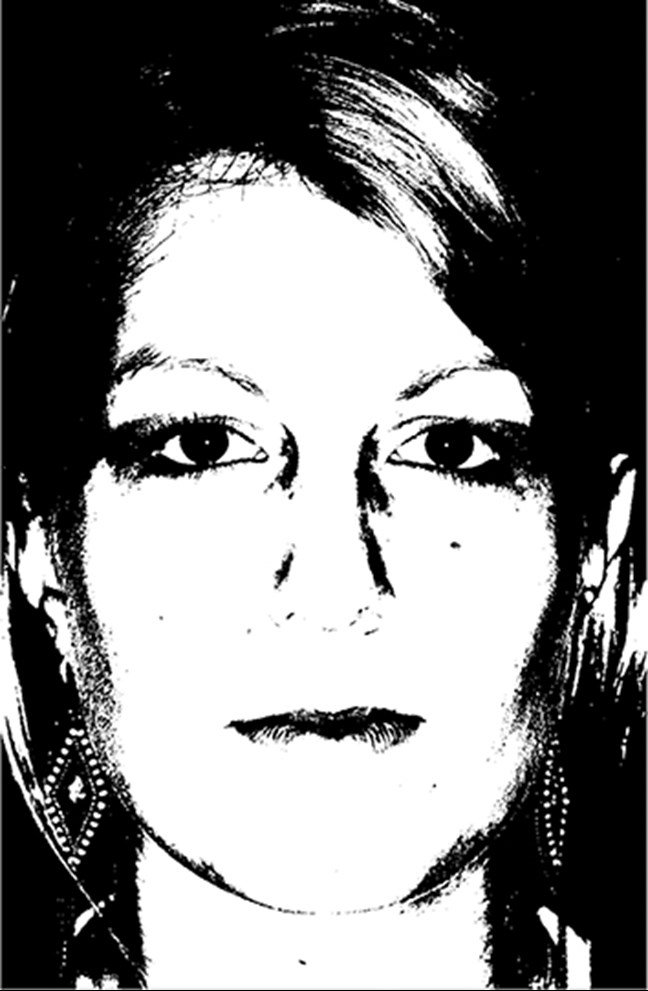 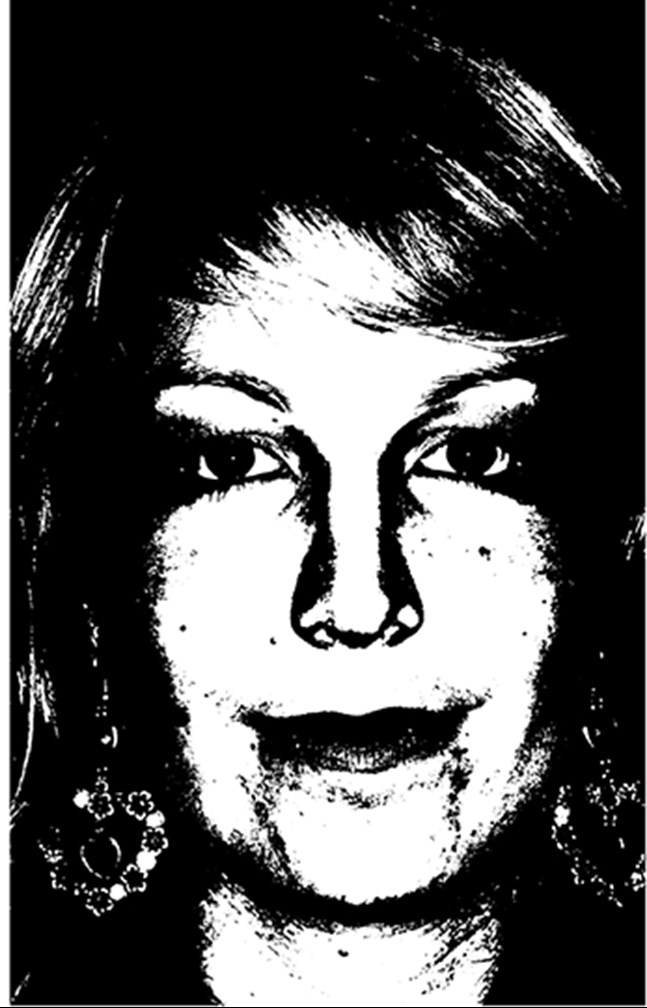 Figure 2b: Postoperative view. Notice the more symmetrical shadows on either side of the light reflected from the nasal dorsum and improved brow-dome lines. A softer, rounder tip represents the most frequent wish of young female patients. 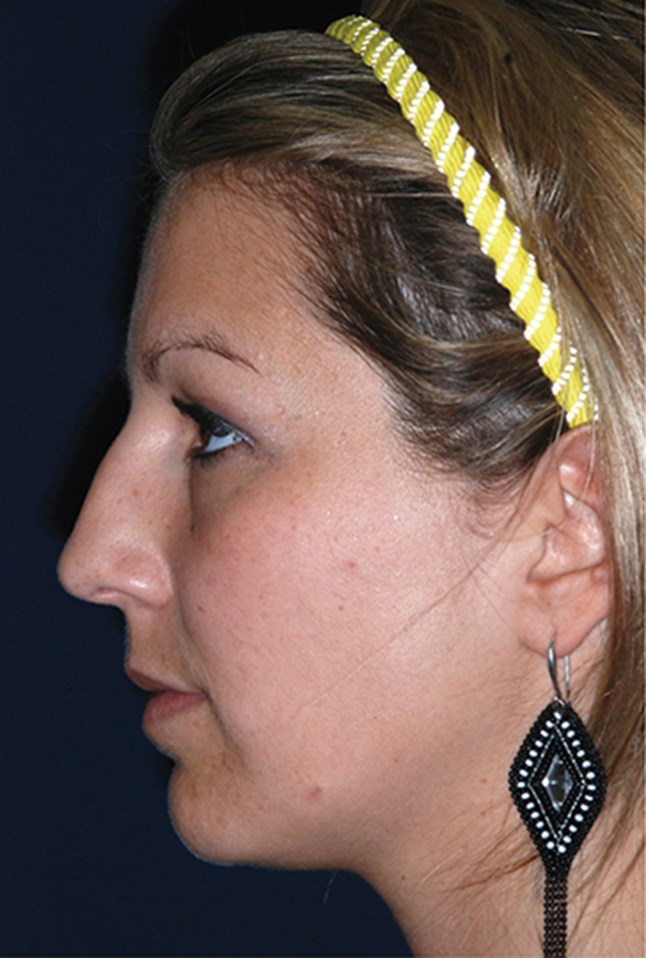 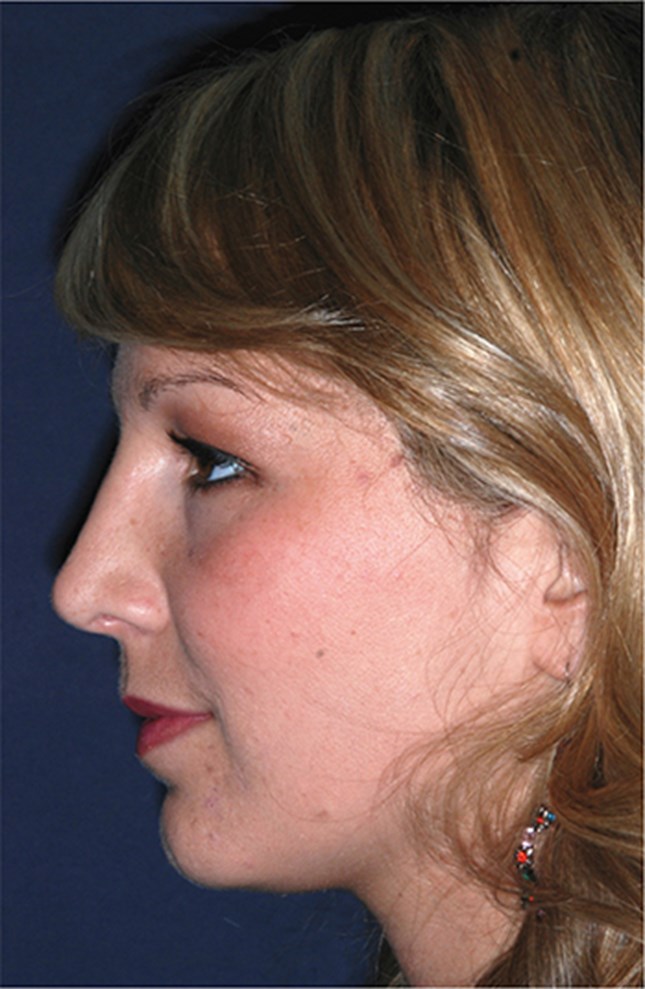 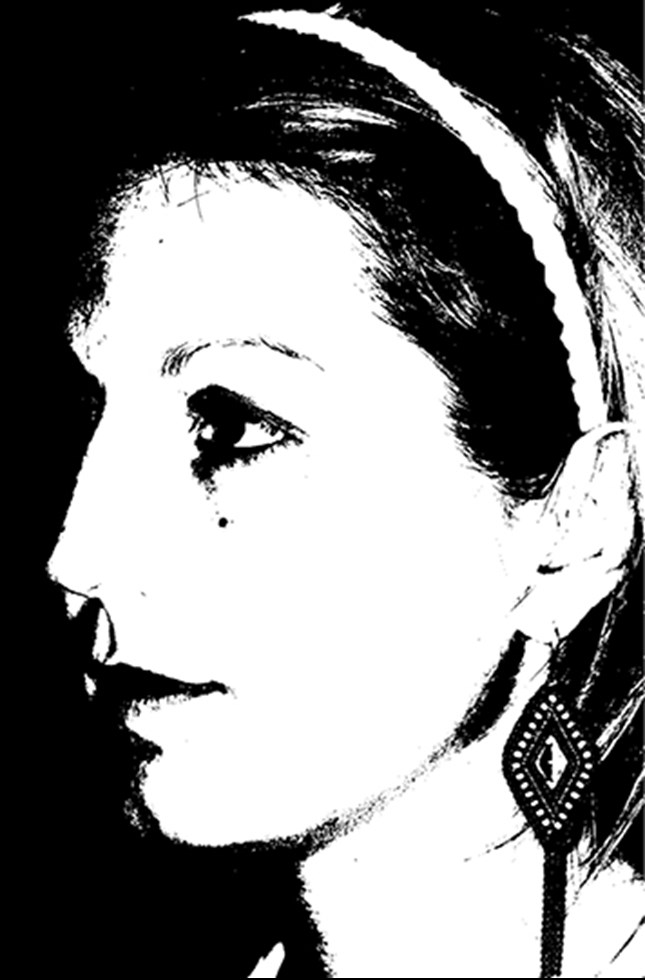 Figure 4: Left three-quarters view. The ‘Chiaroscuro’ concept is clearly visible when comparing the Figure 4a, above, (preoperative) and 4b, below, (postoperative) photos. The brow-tip line flows more smoothly and elegantly. 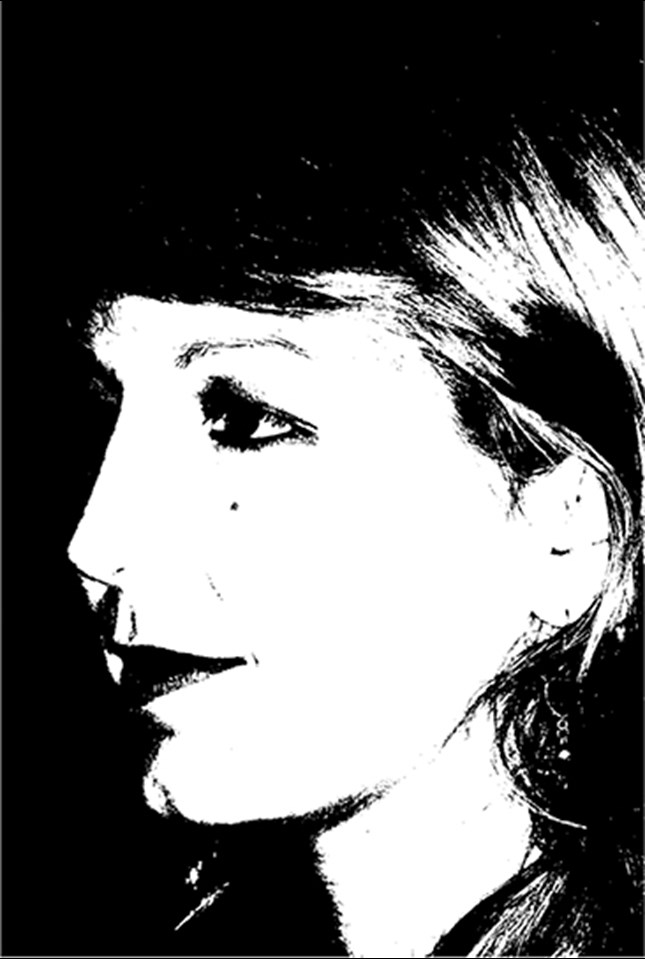 The term ‘ethnic rhinoplasty’ has become increasingly important over the past few years. In general, this term implies that ‘rhinoplasty’ should be used for those patients with North-West European features, and ‘ethnic rhinoplasty’ for all others. However, considering the huge amounts of movement of peoples across the globe, such a distinction seems superfluous and unhelpful [5-9].

Mass media has had a profound effect on the homogenisation of ‘beauty’. The concepts of facial aesthetics have become more convergent rather than divergent [11]. Glossy magazines and the appearance of film stars and pop artists are far more important in people’s minds than what facial plastic surgeons are taught as the principles of a beautiful nose. The influence of mass media is now so powerful that even in remote regions of the world, the faces of famous actors are well know and appreciated as models of beauty.

The flow of ‘beauty’ has not been solely unidirectional from West to East or North to South. Currently, very large numbers of facial cosmetic procedures are performed in South East Asia where the rounded nasal tip is considered as desirable. This particular change in aesthetics has now been reflected in western fashion models who are chosen for this particular nasal feature in order to attract more customers from Asia.

In Japan augmentation rhinoplasty and blepharoplasty became increasingly popular after the Second World War. This may be interpreted as an adaptive social mechanism for integration with the new world.

However, in India and the Middle East, the desire to maintain certain ‘national’ features has taken on a political dimension, possibly as a reaction to the colonial era. Here, patients request less exuberant ‘ethnic’ features, and a more harmonious profile, rather than a complete ‘western’ nose.

Dominant ethnic features can be very important for certain populations, such as the Aborigines of Australia, Native Americans, and people of West African origin. For these patients, the rhinoplasty surgeon must be very sensitive to the patient’s particular desires, and comply with their wishes. A Western European nose on a patient of Central American origin could look out of place and result in social stigmatisation.

The ‘Mediterranean’ nose poses its own unique set of challenges. For thousands of years, interaction with the people of Northern Europe, the Middle East, and North Africa has led to facial features that cannot be simply classified or categorised. Roman, Semitic and Slavic features can readily be distinguished in any southern Mediterranean city. Therefore, Mediterranean noses pose unique challenges for the rhinoplasty surgeon such as thickness of the skin on the lower third of the nose, broad or ptotic tip, and a prominent profile. These complex challenges make facial analysis even more demanding, and mandate adequate planning for a tailor-made surgical game plan [8-9].

The playing field has not stayed stationary in the West either. About 20 years ago, the ‘Dallas Tip’ became the gold standard of nasal aesthetics. This ‘bi-tip’ can be distinguished by two points of light reflection from the nasal tip and, for some surgeons, still represents the ideal in nasal tip aesthetics [10]. However, many patients no longer want this particular look and desire a ‘monotip’, possibly as a result of the influence of the South East Asia. This ‘monotip’ blends imperceptibly with its surrounding aesthetic units with no obvious borders of distinction [11].

It is imperative that rhinoplasty surgeons familiarise themselves with the common local features of their patients and base their facial analysis on the current understanding of ‘beauty’, rather than imposing their academic views on to a patient’s wish list. Patient-specific facial analysis and culturally relevant decisions are the keys to a successful outcome. As the concept of beauty is a dynamic and evolving field, the astute rhinoplasty surgeon must consider the effects of mass media, pop culture, immigration, the internet, and even national aspirations when planning surgery. These complex considerations have profound effects on the techniques used in rhinoplasty and patient counselling.