Consultant Plastic Surgeon, Ewa Majdak-Paredes, explores the increasing demand for labiaplasty and the surgical techniques to obtain the best outcome for patients.

It is recognised that there is an increasing demand for labiaplasty procedures including amongst teenagers. 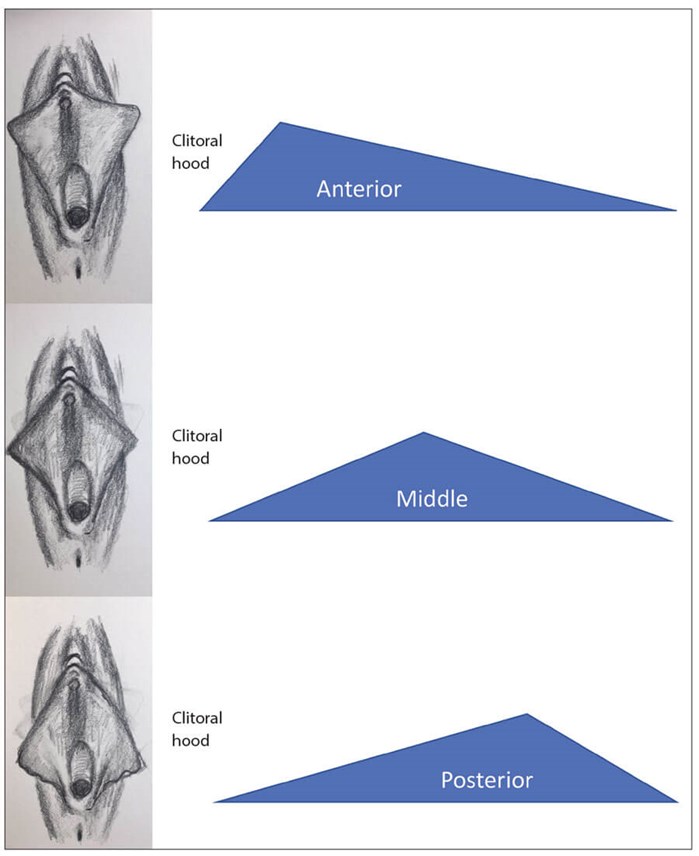 However, most women who present requesting a labiaplasty procedure typically have a very specific anatomical variant in which labia minora are overly prominent in the anterior, middle or posterior aspect (Figure 1). Not infrequently, labia minora on one side might be affected by one variant (e.g. anterior), whereas the contralateral side by another (e.g. posterior). Similarly, the length of the most prominent point of this variant might also vary in size on each side (e.g. shorter or normal on one side and longer on the contralateral side).

In addition, natural asymmetries in other areas of female external genitalia are extremely common, e.g. in the areas of clitoral-labial complex and the way the hood inserts or blends into the labia minora varies in women, so does the thickness of the tissue, corrugations of the edge, pigmentation, etc. These heterogenous appearances of the external female genitalia form variants of the norm. For instance, in some women the clitoral hood might insert to the labia minora via bilateral frenulum (clitoral dominant variant) whereas in others the clitoral hood is almost vestigial and a double fold might be present fusing with labia minora (labial variant).

However, most women who are seeking a labiaplasty procedure are looking for reduction of the most prominent variant of labia minora which affects them predominantly psychologically but can also cause physical symptoms such as discomfort from labia being pulled by clothing, exercises or tugging during sexual activity.

Figure 2: Blood supply to labia minora. Arborisations between anterior and posterior blood supply via segmental vessels one of which might be dominant.

It is of paramount importance to obtain a focused history, particularly with regards to what patients wish to achieve with the procedure. Most patients would like to reduce the enlarged variant of labia minora. The clinician must ascertain whether patients have realistic expectations as to what the surgery can achieve. It is important to point out that natural asymmetries are common, and they might become more visible to patients once the enlarged part of labia minora has been removed. The consent process should follow general standards such as what the procedure would entail, hospital stay, recovery and risks.

The term labiaplasty is often used, also by patients, as a synonym referring to, in fact, a labial reduction procedure.

There are two main surgical labiaplasty techniques: wedge excision and trim technique. Both techniques are safe and widely used. 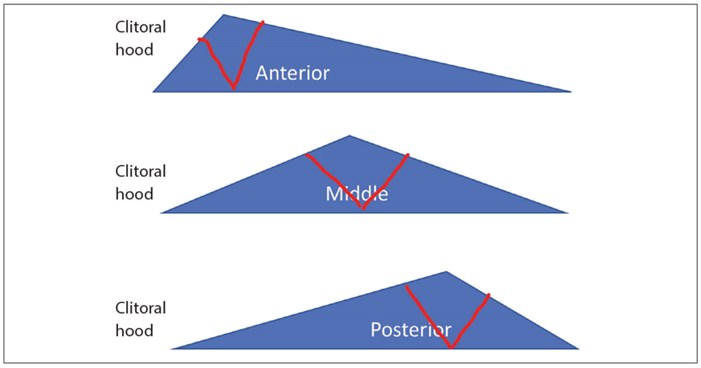 Figure 3: Centralisation of wedge excision depending on the anatomical variant.

In wedge technique a wedge of labia minora is being removed. The peak of the wedge should be positioned to be the mirror image of the most prominent anatomical variant (Figure 3). As a result, the position of the scar would vary in different patients depending on the anatomical variant. The scars usually settle very well and will eventually look quite inconspicuous even as early as a few weeks after the procedure. Removal of excess of labia minora with the wedge technique spares critical nerves and preserves arterial supply. The procedure takes a relatively short time to do and is very well tolerated by patients even under local anaesthetic. There are modifications or adjustments of the wedge technique which have been described in different anatomical variants, e.g. adding debulking of subcutaneous mucosa in patients with thick labia or adding a trim to the wedge (L-resection or demucosalisation). However, the scope of this article is to describe the basic principles and techniques which often work just as well and are safe.

Markings are done when the patient is in lithotomy position and before local anaesthetic is introduced, otherwise the swelling from local anaesthetic might distort the original anatomy and there is a higher risk of over or under-correction and asymmetry. In wedge technique, a V-shaped drawing should be made (Figure 3), however, one should not place the peak of the V too close to the urethral meatus (particularly in anterior or middle variants) to reduce the risk of damage or distortion in this area. Distortion of urethral meatus might result in spraying of the urinary stream. Coaptation of edges of the V with minimal tension is of paramount importance and the V should be centralised around the most prominent portion of labia minora. 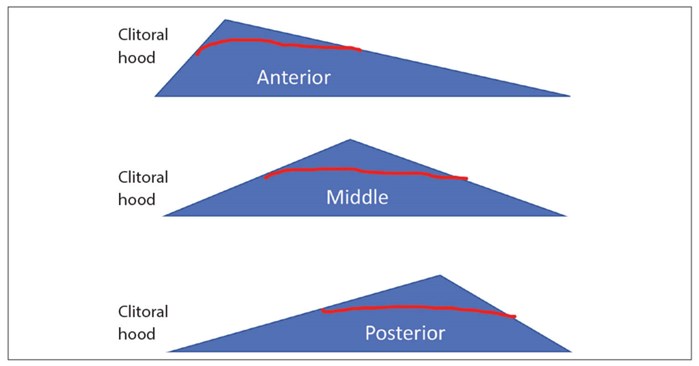 In trim technique, the elongated edge of the labia minora is being removed via edge excision (Figure 4). The suture line is at the edge of the labia minora. Sometimes the natural corrugations are also being removed with this technique which leaves the edge partly corrugated and pigmented and partly smooth and red looking, which might not always be desirable depending on the original anatomy.

Wound dehiscence can occur in patients in whom a dominant segmental blood supply has been removed with the V resection in wedge technique (3.5%) [1]. Fenestrations can occur in patients who have very thin hypoplastic looking labia minora [3]. In a large series of 450 labiaplasty procedures, the most common risk was revision surgery (7%), followed by wound dehiscence (3.5%). Complications such as pain, infection, bleeding and dyspareunia occurred in less than 1% of patients [1]. There were no abnormal scars in this series, which is quite reassuring. I would also emphasise to patients that any pre-existing asymmetries might become more noticeable after the labiaplasty procedure.

“It is of paramount importance to obtain a focused history, particularly what patients wish to achieve by requesting a labiaplasty procedure and whether they are psychologically or physically affected by the anatomical variant”

Realistic outcomes of a labiaplasty procedure would include having the most prominent part of the elongated anatomical variant of labia minora reduced. Any pre-existing asymmetries, particularly in the area of clitoral hood or remaining parts of the labia, might become more visible. Scars generally heal very well and become inconspicuous in the long run.

Lipomodelling to labia majora has proven to augment the appearance of labia majora and restore the volume which we tend to lose in that area [5]. Thus, fat transfer could be added in patients who have empty labia majora if they feel affected by their appearance in that area. The procedure involves structural fat grafting to the labia majora following the standard basic principles of fat grafting. It is expected that 50-70% of the fat graft will survive and there is a possibility of having to repeat the procedure in order to build up the volume in the labia majora to a desired level of satisfaction. Specific risks of the procedure would involve donor site complications such as swelling, bruising, fat necrosis, asymmetry, pain, etc. Additional specific risks would involve swelling, bruising of labia majora, no improvement, asymmetry, fat necrosis, further surgery, pain.

Labiaplasty procedures are becoming much more popular. Most women who present to plastic surgeons are typically affected by an anatomical variant of the enlarged labia minora which is amenable to wedge excision or trim. I prefer to use wedge technique because the technique is safe, straightforward, results are predictable and there is little interference with the natural anatomy in this area. However, assessment and counselling should be of high standards and patients’ expectations should be ascertained to ensure they are realistic.

It is impossible to define the ideal aesthetic landmarks or units of the external female genitalia simply because such a great anatomical variety exists between women all constituting variants of the norm. Labiaplasty procedures are relatively safe in carefully selected patients and the overall complication rate is low. Pre-existing asymmetries might be accentuated or more visible to patients once the elongated part of labia minora is removed and patients should be told about this. However, most women seem to be happy with reduction of the elongated anatomical variant of labia minora.