Over recent years, aesthetic medicine and aesthetic surgery have become closer and more combined in daily practice. There is also a gradual shift, with aesthetic doctors performing more invasive techniques, whereas plastic surgeons are also, whenever possible, moving to less invasive procedures.

There has been an international increase in the use of PCL and CaHA in the aesthetic treatment for soft-tissue augmentation and facial contouring. Both these products are gaining usage for correction of profile deformities, and in some cases replacing the surgical interventions performed by plastic surgeons. A good indication now for PCL and CaHA is chin contouring.

In this particular area a minor augmentation (5-6mm) can change the entire shape of the face. It is important to know that this correction is achievable and is stable even with changes in body weight.

Chin augmentation is ideal in patients with a small, hypoplastic chin, essentially due to a deficit of the mental tubercle and surrounding bone.

In a few patients with ‘mandibular senilis’ (atrophic age-related jaw and chin), the aimed expansion of the jowl tip would sometimes offer a better aesthetic outcome. Figure 1 shows the same patient in a two step technique. Image b shows the results from a non-surgical approach with filler, a good improvement, but not stable. Image c shows the result following surgery: stable, sharp and predictable.

Figure 1: a) Baseline, b) Post non-surgical approach with fillers and c) post-surgical result. 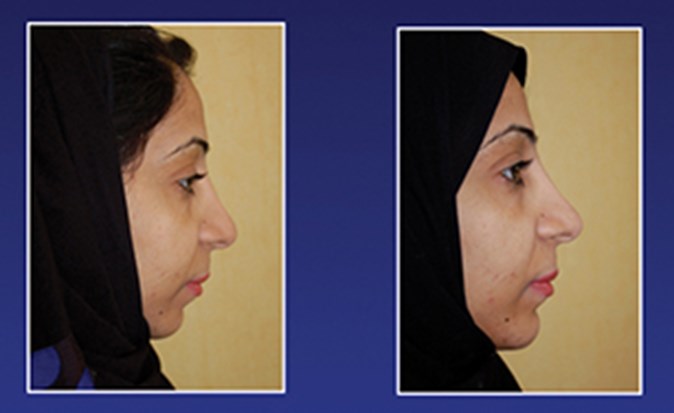 Another method of chin augmentation uses an injectable implant (filler). Most fillers are temporary with results lasting months to years. Common temporary fillers include hyaluronic acid and calcium hydroxyapatite preparations. Permanent fillers, like ‘free’ silicone, have fallen out of favour due to the risk of migration, chronic inflammation and infection, which can permanently disfigure the chin.

Recommended techniques and procedures for correction of the chin

It is recommended to inject a multiple bolus of the PCL- or CaHA-based soft tissue filler in the supraperiosteal area by a 27G needle in the areas near the tuberculum mentalis, in each lateral site. The bolus is then massaged in order to evenly distribute the product over the area. If the results are still not satisfying, then a second bolus (50% less volume than the initial bolus injection volume), should be injected again in the same area. However, the total amount per site should not exceed 0.5cc of product, while usually 0.25cc per site is enough. Therefore, it can be reasonably assumed that the maximum filler needed is one syringe (1cc), while half of the syringe most likely will be enough in the majority of cases.

The most common type of surgical chin augmentation uses a chin implant. There are many types of chin implants, and many are described by previous authors. Chin augmentation with a chin implant is usually a cosmetic procedure. An incision is made either under the chin or inside the lower lip sulcus, a pocket is made and the implant placed into the pocket. Some chin implants are fixed to the mandible, while others are held in place by the pocket itself.

Another surgical chin augmentation uses the lower prominence of the mandible as the ‘implant’. Known as a sliding genioplasty, the procedure involves cutting a horseshoe-shaped piece of bone from the lower border of the mandible known as an osteotomy. For chin augmentation, the piece of bone is advanced forward to increase the projection of the chin. The bone can also be recessed backward for a chin reduction. The new position is held in place with a titanium step plate using titanium screws. The bone segment can also be fixated with 26 or 27 gauge wires and inter-maxillary fixation (IMF) (wiring the jaw shut) for three to four weeks. This type of surgery is usually performed by an oral and maxillofacial surgeon or plastic surgeon. More involved orthognathic surgery may be required in cases where a small chin and a significant overbite co-exist. While the procedures above may improve the cosmetic appearance of the chin, they will not improve dental occlusion. Mandibular advancement surgery can be used to correct the alignment of the teeth and improve the projection of the chin.

These two approaches to chin profiloplasty are so different but have the same objective to restore harmony in contouring the face. The medical approach is relatively simple, less aggressive and inexpensive, with short down time. However, I favour the surgical approach as it is more predictable and stable, the new profile will be sharp and more firm. Sometimes these procedures may be used in combination to achieve the most desirable results for the patients – first surgical implant followed by some filler to smooth the final profile. 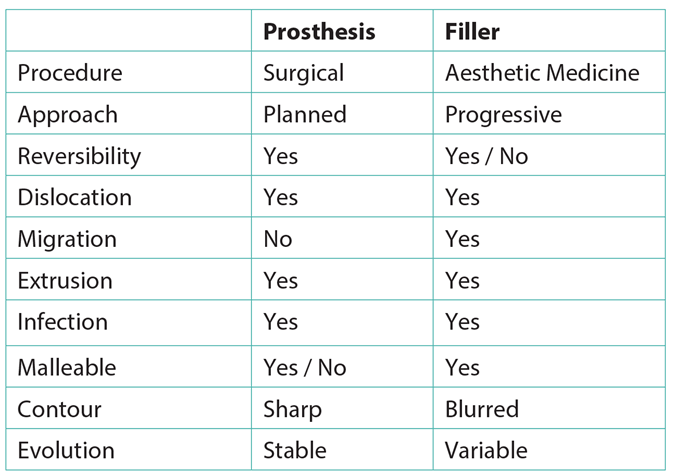