Cellulite affects a large proportion of women. Recently several companies have produced compression hosiery claiming to reduce the appearance of cellulite. One of the latest products are ‘Silver Wave’ stockings, made by Solidea, which claim to reduce cellulite using ‘patented micro-massage ridge technology’. We performed a prospective study on a small number of women with cellulite to see if this could be substantiated.

Cellulite can be unsightly and embarrassing for those affected. It is most common in post pubescent females with the cellulite being most visible on the thigh and buttocks area. Cellulite creates a dimpled appearance on the skin. The causes of cellulite are unknown; however it is thought to be due to a combination of hormones, genetics, diet and lifestyle.

There are many different cellulite-grading systems in place. The system used in this study was the eponymous ‘1978 Nurnburg and Muller’ [1]. This system grades the cellulite from Grade 0 to Grade 3:

The current approach to help reduce the appearance of cellulite starts with recommendations to increase exercise and optimise the diet. Weight loss does seem to improve the appearance of cellulite and exercise with good diet, although not proven, are sensible recommendations with other health benefits. Specific treatments include massage, dry body brushing and tights wraps, although there is very little science behind these treatments for cellulite. There is some clinical research behind some heat therapies including radio-frequency and infra-red heat sources, suction massage [2] and also combining infrared, radio-frequency with suction rollers to create a therapeutic machine such as ‘Velashape’ [3].

Recently the market has seen the introduction of different ‘anti-cellulite’ stockings using compression and a combination of other features such as caffeine or ‘micro-massage ridge technology’. These products often make claims such as to “boost the circulation, making cellulite a thing of the past” [4].

Therefore the aim of this study was to assess whether the specific ‘micro-massage ridge technology’ anti-cellulite compression stockings are effective in reducing the appearance of cellulite. 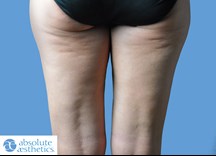 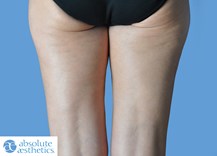 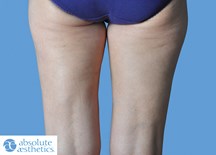 Figure 2a-c: An example of the photographs taken at the end of each four-week period. Despite the lighting varying slightly due to movement of patient, the improvement of the appearance of cellulite is clear.

Eight patients were recruited for the study, between the ages of 18-65 with the mean age of 44. The inclusion criteria stated that all patients must have visible cellulite of Grade 2 or higher. The patient was to have a stable weight for the past three months and also not to be undergoing any other anti-cellulite treatments.

The format of the study was a 12-week prospective period split into three periods of four weeks each. The first period (weeks 1-4) was the stabilisation period, second period (weeks 5-8) was the treatment period or ‘stocking-wearing month’ and the final period of the study (weeks 9-12) was the post treatment follow-up month, to establish how long any visible results might last (Figure 1).

The study patients came to the clinic at weekly intervals and at each visit photographs were taken, using standardised lighting, of the thigh and the buttocks area from various standardised angles including from the front, back, lateral and oblique. At the weekly visits, the patient’s weight was taken and visual analogue scales were completed by both observer and patient. At the end of the study, the standardised photographs were reviewed, independently, by two blinded observers who were shown the photographs in a randomised order.

“There was a continued improvement in the appearance of cellulite after the stockings had been discarded.”

The results were collated and they showed that the participants’ weight had remained the same throughout the whole study.

The observer visual analogue scales showed the same pattern of results as the subject-reported visual analogue scales. Again there was no change, as expected, during the stabilisation month (month one). Just as with the subject-reported scales, there was an improvement during the ‘stocking-wearing month’, (month two) although using a formal statistical analysis this just failed to reach significance due to the small number of subjects. Month three similarly showed that interestingly there was a continued improvement after the stockings had been discarded.

At the end of the study, the photographs were reviewed by two blinded observers as outlined above. The results of the observer photo ratings showed the exact same pattern of improvement however, they again failed to reach significance due to the small number of subjects (Figures 2a-c).

To summarise our findings, using standardised photographs, both the subjects and the independent observers could see a reduction in the appearance of cellulite after wearing Solidea ‘Silver Wave’ anti-cellulite compression stockings for eight hours per day for four weeks. The effects have also shown to persist for at least four weeks after the last use of the stockings. This was extremely interesting as, before the study, we were dubious that there would be any noticeable result at all just by wearing any anti-cellulite hosiery.

Of course scientific studies can give an answer, but just as important is what the patients thought of the results and the experience.

After the study, one patient said, “I do believe there’s been an improvement and I do think the shorts really do work.”

Another lady wrote after the study, “Funnily enough I am wearing the tights today! I tend to try and wear them once a week to keep the cellulite at bay! When I first saw the tights I did wonder how I would get them on but once I was wearing them it was easy! I even managed the eight hours a day on holiday in Lanzarote! There was a marked improvement in the smoothness of my skin on the outer thigh area particularly, the appearance of cellulite lessened and I would recommend them which is why I am still wearing the tights! They are easy to wear under trousers or a long skirt in the summer.”

A further participant wrote, “I am writing to tell you that I think the trial I have partaken in to assess the efficacy of the micro massage shorts was very thoroughly executed. Harriet, you were lovely to come to see each week and thank you for your time. The shorts themselves were initially very tight but having become used to them in one day, they gave an extraordinary sense of ‘security’ and were not difficult to wear at all. Hot days were a little different but I managed that and it was not really a problem and anyway, the result was worth it. Therefore, to achieve a smoother cellulite area by wearing each day for a number of weeks was perfectly possible. My cellulite definitely improved!! Actually, the other ‘upside’ was that the quality of my skin was noticeably smoother. When I stopped wearing them for five to six weeks the quality of my skin around my thighs reverted somewhat but that can be fixed!! Wear them again and that will not be a hardship. So - in my eyes a good result. I hope that all the other testers felt the same. Thanks so much for asking me.”

Further studies are needed to increase the power of the study to identify things such as the magnitude of improvement in different grades of cellulite, whether different regimes of wearing the stocking will produce different results and also how long the effects last after the last use of the stockings. In addition, these findings cannot be extrapolated to other ‘anti-cellulite’ stockings which boast other mechanisms of action and each of these will need to be studied for efficacy.