The uses of BTX-A in maxillofacial surgery
By Rami Salha

Botulinum toxin type A has many uses in maxillofacial surgery. This article will cover its uses in the treatment of Frey’s syndrome, myofascial pain, masseteric muscle hypertrophy and sialorrhoea. Other uses relevant to maxillofacial practice but not covered in this article include the use of botulinum toxin in cosmetic surgery, chronic migraine, cervical dystonia (spasmodic torticollis) and blepharospasm (eye twitching).

Clostridium botulinum is a rod-shaped, gram-positive anaerobic bacterium. Seven serotypes exist (A, B, C, D, E, F and G) and each produces a unique neurotoxin [1,2]. Botulinum toxin type A (usually abbreviated to either BTX-A or BoNTA) is the most toxic material known, being more lethal than tetanus and sodium cyanide [2]. It is also a highly dangerous food poison, not destroyed by digestive enzymes. It is destroyed by heating at 80°C for at least one minute. Botulism was widespread during the Napoleonic War in the late 1700s, and was caused by botulinum toxins in contaminated foods, primarily smoked blood sausages.

The first medical use of BTX-A was in 1980 to treat strabismus, but it was not until 2002 that the product gained popularity as an alternative to cosmetic surgery following Food and Drug Administration (FDA) approval in the United States [3]. In 2005 Botox® was licensed in the UK for the treatment of moderate to severe glabellar lines (vertical ‘frown’ lines between the brows) in adult women and men aged 65 and younger.

BTX-A is commercially available as Botox® and Vistabel® (both Allergen), Dysport® (Ipsen) and Xeomin (Merz). One unit of Botox® is the median lethal dose in mice (LD50) [2,4]. Also, 10U of Dysport® is roughly equivalent to 2.5U of Botox [2]. As a drug, BTX-A has a large margin of safety with an LD50 of 3000U in humans. Each vial of Botox® contains 100 units of BTX-A, albumin and vacuum dried saline.

Botulinum toxin exerts its effects by blocking the release of the acetylcholine neurotransmitter from nerve terminals at the neuromuscular junction. The effect is long-lasting but is reversible, as new nerve terminals sprout [5,6].

Preparation and recommended method for usage

According to the Botox Consensus Group [7] BTX-A should be stored as follows:

After adding saline, the vial should not be shaken but gently rolled between the palms of the hands to ensure even mix. After injection, the patient should be instructed to:

Contraindications include infection at the injection site and allergy to albumin. Relative contraindications include neuromuscular disease, pregnancy and lactation, anticoagulants, and certain medications (aminoglycosides, quinine and calcium channel blockers) [8]. A recent BTX-A injection is a relative contraindication because early reinjection increases the risk of developing antibodies that render further treatment ineffective. Antibodies against BTX-A occur in 5-10% of cases [5]. When this occurs, botulonium toxin type B or F can be used [2]. Typically, re-treatment should be separated by at least three months to avoid the development of antibodies.

Frey’s syndrome was first described by Baillarger in 1853 after draining a parotid abscess [9]. Lucie Frey, a Polish Neurologist, described it as ‘auriculotemporal syndrome’ in 1923 [9,10]. Frey’s syndrome presents as gustatory flushing and sweating at meal times.

The aberrant regeneration theory is the most widely used theory to explain Frey’s syndrome. The severed parasympathetic fibres regenerate and supply the small blood vessels of the skin and the sweat glands, and when stimulated, result in gustatory flushing and gustatory sweating [10].

Frey’s syndrome most commonly occurs after parotidectomy. However, it could also occur after trauma, e.g. condylar fractures, forceps delivery, and as a result of diabetic neuropathy, and herpes zoster infection [9].

The standard diagnostic test is the Minor’s starch-iodine test, first described by Victor Minor, a Russian Neurologist. The skin overlying the parotid is first covered with betadine, and after drying, a starch powder is applied. The patient is then given a salivary stimulant to chew. The sweat reacts with the starch-iodine to produce a blue-purple colour [9].

The incidence of Frey syndrome increases as the time since surgery increases. It is thought to affect 40-80% of patients if questioned, and 95-100% of patients if the starch-iodine test is performed (9-11). However, only 15-30% of patients seek treatment [10]. On average, a minimum of five weeks since surgery is needed for gustatory sweating to appear, and eight weeks for the starch-iodine test to become positive. The latent period is due to the fact that regeneration of the parasympathetic fibres takes time [9]. Equally, the affected area exhibiting gustatory sweating gradually becomes bigger with time as the regenerating fibres reach distant sweat glands [9].

Techniques used to prevent and treat Frey’s syndrome are summarised in Table 1. 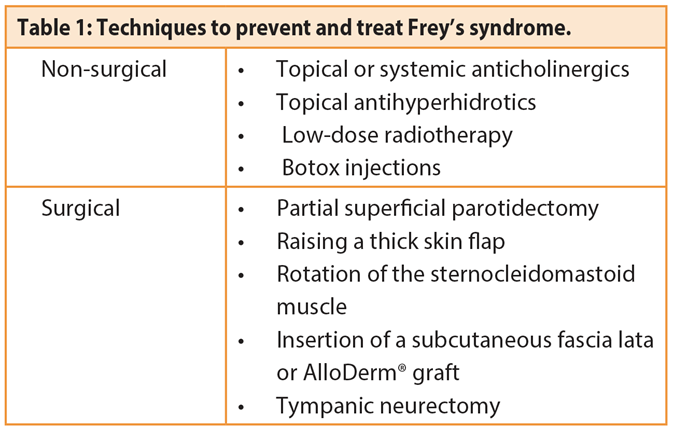 The use of BTX-A was first described in 1995 [4]. The most frequent dose used is a total of 100U divided into two x 1ml diabetic syringes, giving a dose of 50U per ml. The BTX-A is then injected intradermally as 0.1ml (5U) 1cm apart. The use of small doses minimises discomfort, drug diffusion and side-effects. The injection should be strictly intradermal in order to avoid the risk of facial palsy. Wheels should be seen at the injection sites. The effects last an average of 15 months and may need to be repeated.

The exact mechanism of action of BTX-A in reducing sympathetic dysfunction and sweating in Frey’s syndrome and sialorrhoea is unknown. However, when BTX-B is compared with BTX-A in the treatment of cervical dystonia, BTX-B induces a higher incidence of dry mouth, indicating that it has a higher affinity for cholinergic terminals [12].

Review of the literature suggests the effectiveness of BTX-A in the treatment of Frey’s syndrome to be high, and in one review 98%. However, there’s no well-designed randomised controlled trials to support this [13,14].

Myofascial pain is a chronic facial pain that may present as a spectrum of temporomandibular joint (TMJ) dysfunction syndrome. The hallmark of myofascial pain is the trigger points – when palpated, they classically elicit tenderness.

The first line of treatment is conservative measures that include jaw rest, soft diet, occlusal splint, physiotherapy and non-steroidal anti-inflammatory drugs (NSAIDs) either topically or systemically, although topical application has similar therapeutic effects but without the systemic side-effects [15]. The common aim of those measures is to achieve muscle relaxation. For those that fail to respond, there’s the option of low dose tricyclic antidepressants (TCAs). However, some patients are either reluctant or unsuitable for TCAs, and in those cases BTX-A injections into the trigger points may be a suitable alternative [5]. There are no established protocols or guidelines for the use of BTX-A in myofascial pain but, in general, the recommended dose is between 50-150U of Dysport® per muscle. The most commonly injected muscle is the masseter with a total dose of 75-150U over three sites. However, the medial pterygoid gives a superior and more predictable outcome. In one study, 79% of patients showed improvement in pain by more than 25% [5]. Improvement in pain is often accompanied by improvement in mouth opening. It is likely that BTX-A injections improve pain by causing partial muscle paralysis or reduction of muscle tone rather than a direct analgesic effect [16,17]. 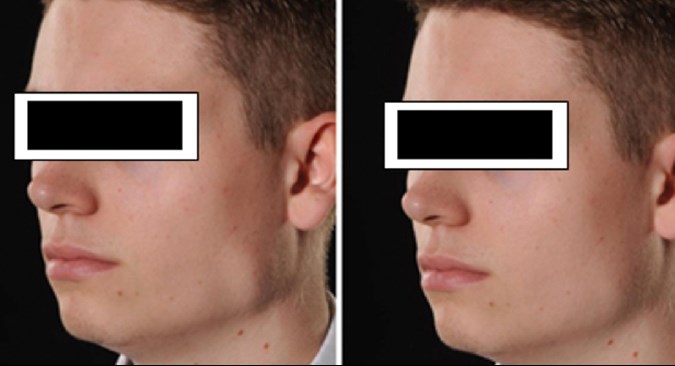 Figure 1: Left masseteric hypertrophy a) before and b) after BTX-A injections.

Masseter muscle hypertrophy is benign enlargement of the masseter muscles (Figure 1). The aetiology is unknown but appears to be more common in certain ethnic groups. In some patients, it can be associated with pain or facial disfigurement.

Treatment options range from muscle relaxants, occlusal splints, surgical reduction or injection with BTX-A, which produces its effects by causing temporary partial denervation of the neuromuscular synapses by prohibiting the release of acetylcholine. Animal studies have shown that this results in muscle fibre atrophy as well as reduction in the size of the muscle fibres. This atrophy starts within 10-14 days after the injection and continues for four to six weeks. The muscle fibres start to recover after four to six months [18].

Although BTX-A injections might appear to be advantageous over surgery, a recent Cochrane review did not find any high quality studies that evaluated the effectiveness of the product for the management of benign masseter hypertrophy [19].

Drooling occurs in up to 50% of children with cerebral palsy. The primary anomaly is not increased saliva production but rather poor oral motor control and swallowing dysfunction leading to inability to handle normal saliva.

The submandibular glands account for 60-70% of resting saliva production, and accounts for the majority of drooling in those children.

Evaluation should be done in a multidisciplinary setting with input from the ENT surgeon, maxillofacial surgeon, speech and language therapist, and a respiratory physician, especially if the child is suffering from respiratory infections due to salivary aspiration.

Treatment options are highlighted in Table 2. Surgical intervention is reserved for those who have failed at least six months of oral motor therapy, those whose disability is too severe for conservative treatment to be effective, and those old enough (at least six-years-old) that no further maturation of swallowing would be expected.

However, in children with cerebral palsy, the injections are typically performed under general anaesthesia. The effectiveness of BTX-A in the treatment of sialorrhoeoa associated with cerebral palsy and Parkinson’s disease has been demonstrated by several clinical trials [20,21]. The response to BTX-A injection can also be used to determine the effectiveness of future submandibular glands excision. Injections can also be used for sialorrhoea caused by salivary fistulas. 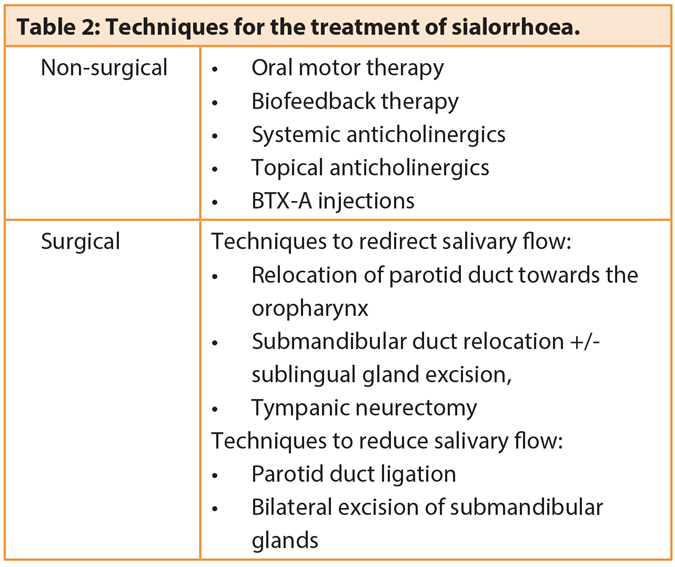 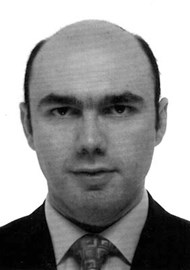