Whilst ablative surgery remains the principal treatment option for head and neck malignancy, the skull base is the last frontier. The complex anatomy, supreme functionality of the brain, and varied pathology provokes many a detailed discussion in the multidisciplinary team meetings around the world. This complexity implies specialised training and a crowded operating room where teamwork is paramount. The ideal surgical part of the team consists of a neurosurgeon, neuro-otologist, ophthalmologist, maxillo-facial and reconstructive surgeon.

My role has been to provide expertise in ablative surgery of the anterior skull-base, access procedures involving the face and jaws and reconstructive surgery. The maxillo-facial surgeon is ideally placed to provide reconstructive options as there is always a close relationship already established with the expert in oral and facial rehabilitation, which in Aintree and Liverpool is Chris Butterworth. His input in the decision-making process between orbital, nasal and oral prostheses is vital, as well as completing the prosthesis often required for an excellent result.

The ability to ablate tumours effectively in the skull-base requires a good understanding of access, the complex anatomy and an appreciation of endoscopic and standard surgical options. In the UK the patterns of referral still have an important influence on the principal surgeon deciding on management and these cases are mostly first seen by otorhinolaryngologists, ophthalmologists and neurosurgeons. The maxillo-facial surgeon is therefore an invited member of the team and brings a good understanding of access approaches anterior skull-base and orbital knowledge and, most importantly, reconstructive options which are often composite. As an important part of the head and neck multidisciplinary team (MDT) there is an obvious cross-over with the skull-base MDT, and a further opportunity to cement relationships in general.

This approach, first described by Hernandez Altemir [1] and popularised by Wei [2], is an excellent approach to post-nasal space and cervical spine. The maxillo-facial surgeon has a good working knowledge of maxillo-orbital surgery and so the maxillary swing involving the orbital floor involves familiar anatomy.

A reliable technique to enter the posterior nasal space and maxilla. It has been used for the management of recurrent nasopharyngeal squamous cell carcinoma if it is considered operable after chemoradiotherapy.

This is used through the posterior pharyngeal wall to access the cervical spine. Splitting the soft palate is no longer practiced due to the poor healing and risk of velopharyngeal incompetence [3].

An excellent approach to the infratemporal fossa and related skull base.

Galeopericranial, temporoparietal, temporalis and forehead flaps. The galeopericranial flap is always available with a coronal flap and is often used to reduce the risk of cerebro-spinal fluid (CSF) leaks. The temporoparietal and temporalis flaps can be used for orbital and medial nasal lining and following shrinkage provide an ideal orbital cavity for a prosthesis. The forehead or glabella flap is also very useful for medial orbit and nasal defects.

I have a personal interest in reconstruction of the maxilla but these resections seldom involve the skull base in terms of the anterior cranial bone or the dura. The main problem if the dura is breached is separating the nasal cavity and ethmoids from the brain and ensuring the risk of CSF leak is kept to a minimum. Resecting the nasal bones results in a defect (Class VI) [4], which requires a vascularised bone graft if postoperative radiotherapy is planned. In the lateral orbital defect (Class V) the defect can often be reconstructed with soft tissue alone as an orbital prosthesis is required or an eye patch which can disguise the loss of facial form. A nasal prosthesis will work well for a rhinectomy often not involving the anterior skull base, but if the frontal and nasal bones are removed, a prosthesis between the eyes is a poor option. Continuing tissue contraction will result in medial canthal drift, ectropion and epiphora. In this situation the composite radial forearm flap is ideal to restore the frontal and nasal bones and provide fascia and skin lining. A glabella flap can be used for the loss of nasal skin if this is not extensive, and the supratrochlear vessels have not been compromised.

For orbital defects I prefer the anterolateral thigh (ALT) flap, which has become established as the first choice soft tissue flap in head and neck surgery following popularisation by Fu-Chan Wei [5].

As a maxillo-facial reconstructive surgeon I take a back-seat in the resection and access for these tumours. My colleague Tristram Lesser (ORL) has developed the service in Liverpool and my role is purely reconstructive support. If there is extensive tissue and pinna loss then I favour the ALT as the first choice reconstruction and the motor nerve to vastus can be used for the facial nerve graft.

The case illustrated opposite underwent a petrousectomy for a vascular malignancy after embolisation. There was extensive tissue loss following the surgery and the patient required a reconstruction three weeks postoperatively which was a latissimus dorsi. This case was done prior to our familiarisation with the ALT. The patient asked for an ear reconstruction, which was fashioned on the radial forearm site with costal cartilage after tissue expansion by my colleague David Richardson, and transferred two months later under joint care.

Patients with loss of facial nerve function and resultant palsy can be helped with facial re-animation using vascularised muscle with facial nerve cross-over grafts. These patients should ideally be seen in a joint clinic dedicated to improving the outcome for this patient group and the maxillo-facial input regarding re-animation techniques is an advantage.

This is an important area of co-operation between our specialties as a mastoid approach to reach the nerve close to the skull base and away from a malignant tumour can be very helpful. I will ask for my ENT colleague to access the main trunk of the facial nerve through a mastoid approach for malignant cases or those I anticipate tumour compromise or spillage to access the main trunk of the nerve. This approach allows better access for both safe resection of the tumour and optimum protection of the facial nerve if that is possible. If a radical parotidectomy is required then there is improved access to achieve clear frozen sections and then nerve grafting. 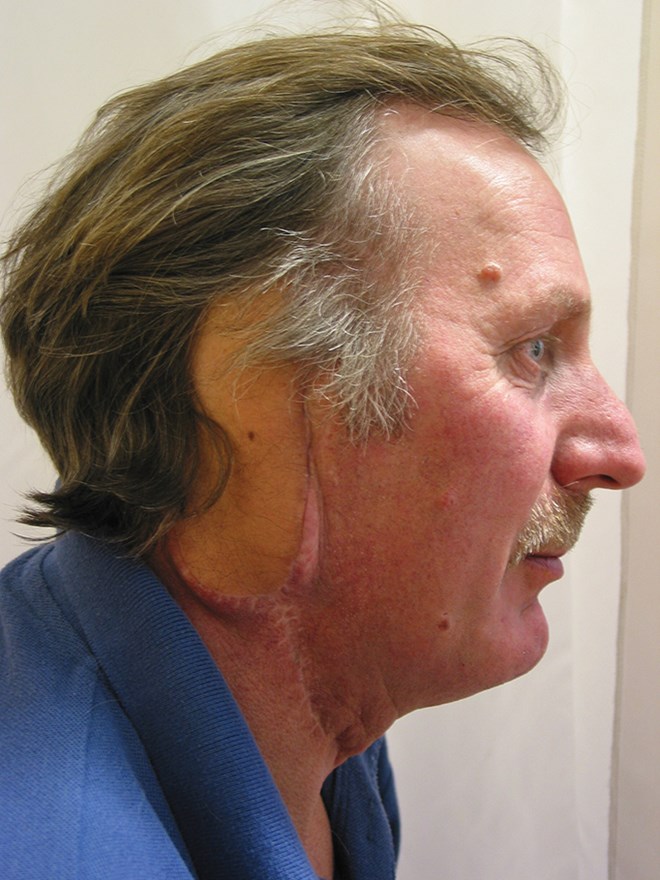 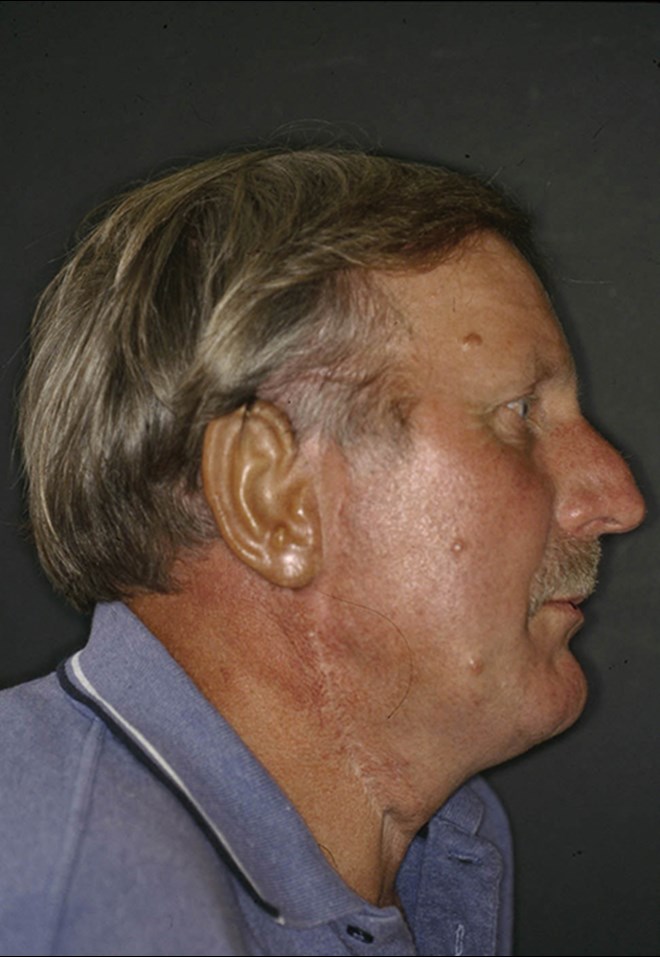 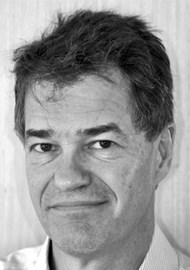