‘Rhinofiller’: non-surgical correction of the nose
By Enis Agolli

Dr Agolli from Italy advocates the use of filler to quickly and easily achieve a non-surgical rhinoplasty without downtime for the patient.

It is believed that Dante Alighieri was not a handsome man, probably because of his appearance, and even more for his ‘peculiar nose’. People generally have often had particular thoughts about ‘the nose’, often surrounded by superstitions and beliefs. Just consider the decorations of primitive tribes, or even more so their jewellery, created on purpose to keep away evil spirits that could enter into the body through the nose [1].

Time after time, it has been said that the shape of the nose depends not only on race, somatotype and age, but also on the environment we are living in. For example, the nose of Europeans, narrower and elongated, is quite different from Asians and Latin Americans; an adaptation over many millennia to living in a colder and dryer climate. Recently a group of researchers from University College London identified some portions of DNA that determine the appearance of the nose: the bony growth and the width of the nasal root are due to the RUNX2 gene, while the genes GLI3, PAX1 and DCHS2 are all involved in the growth of cartilage. The first two (GLI3, PAX1) control the width of the nostrils, while DCHS2 is responsible for the pointed shape of the nose. This discovery is important for the study of the evolution of the human face, and must be considered also for aesthetic reasons, especially in the multi-racial and multi-ethnic society in which we live and work [2]. In terms of the aesthetics of the face, the appearance of the nose is very important, therefore its correction is an indispensable part of the overall aesthetic remodeling of the profile.

The skin that covers the nasal pyramid plays a crucial role, especially its thickness and the ‘real’ and ‘virtual’ spaces where we introduce fillers in non-surgical correction. Starting from the top, in the proximity of the glabella, the thickness of the skin is 6-8mm. It is composed of loose cellular tissue and can be an area for positioning fillers. In the passage towards the nasal bone and near the root, the thickness of the skin measures from 3-5mm (paranasion) with a thinning of the loose cellular tissue; however, we have to consider this space ‘real’ with good opportunities for an adequate filling. Continuing downward, the skin coverage in the centre of the nasal bone is 3-3.5mm, while the tip (distal portion) of nasal bone is covered with a skin thickness of about 2-2.2mm. Consequently, the space to inject is reduced also. The skin of the upper third of the nose is generally stretchable, flexible and elastic [3].

Therefore, the dorsal portion of the skin is the thinnest overall, does not exceed 2mm in thickness and is the least stretchable. It is fixed by the loose connective tissue of the nasal muscle aponeurosis and the muscle fibres that are distributed in its interior. The adherence of the tissues greatly reduces the space, indeed we have a ‘virtual space’ in this portion. In this area, it is recommended to only inject a very small amount of medium density filler, via a cannula and not with a needle. The use of the cannula, in an area which is very close fitting and rich in vessels and with very adherent tissues, offers a much safer treatment for patients.

Toward the tip of the nose, the cutaneous thickness is about 5mm, while closer to the nasal ala this reaches up to 7mm. The skin of the lower portion of the nose is similar to the upper third, and furthermore, is rich in sebaceous glands. This area should be treated with extreme care, because the subcutaneous tissue is quite adherent to the underlying cartilage so, in spite of the thickness, here the ‘space’ is very virtual. In addition, this part of the nose is even more vascularised, so an excessive amount of filler or the wrong choice of product can cause complications or side-effects [3,4,5].

Alterations of the nose

Mainly, nasal alterations concern the bones and cartilage. Alterations of the nasal profile can be:

a) Congenital: i.e. congenital growth hormone deficiency where the root of the nose is sunken.
b) Traumatic: following fractures or contusions, both of bones and cartilage.
c) Post-surgical: as a result of the wrong or badly done surgery for structural / functional problems or for aesthetic purposes.

The alteration of the size of the nose can be a deciding factor for the next surgical or non-surgical treatment. So, a long, big or wide nose may require an aesthetic surgical procedure (reductive), while treatment with fillers (additive) may be suggested for a shorter, narrower or smaller nose.

The alterations may also concern the shape, such as in cases of a ‘saddle’ nose, a nose with a hump, a nose that sticks up, an aquiline, deviated or broad nose, or a bulbous, flat or collapsed nose, etc. Therefore, the main indications for the application of the rhinofiller method are: 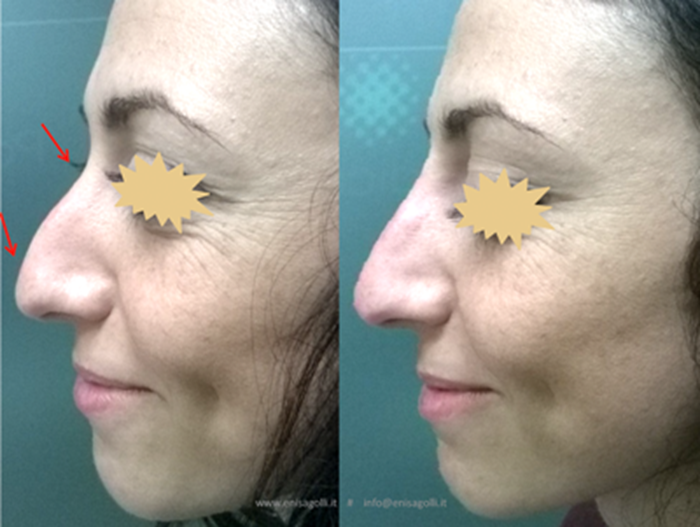 Figure 1: Before and after. Filling the root of the nose with calcium hydroxyapatite, modeling and projection of the nasal tip with hyaluronic acid. The visual effect obtained gives the impression of a shorter nose. 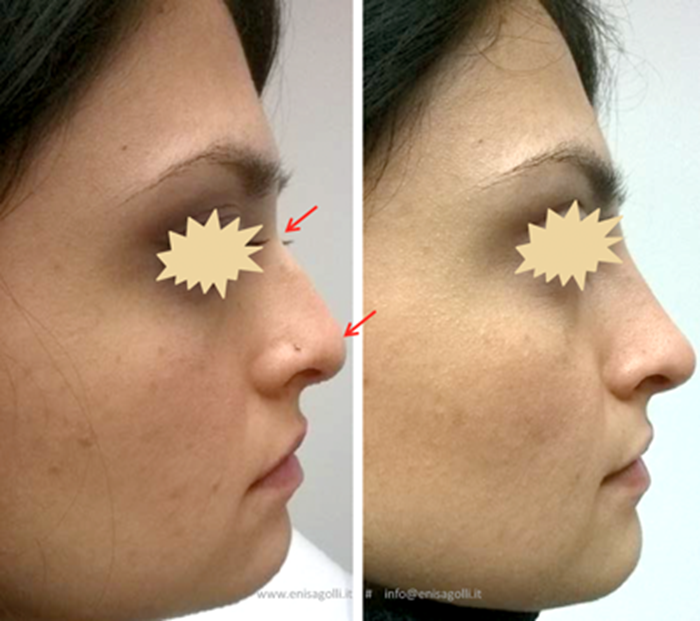 Figure 2: Before and after. Filling the root of the nose with calcium hydroxyapatite, shaping and rounding the front projection of the nasal tip with hyaluronic acid. We can see that the nose is tending downwards at the tip, but when it is aesthetically corrected, it has a more gentle effect upwards. 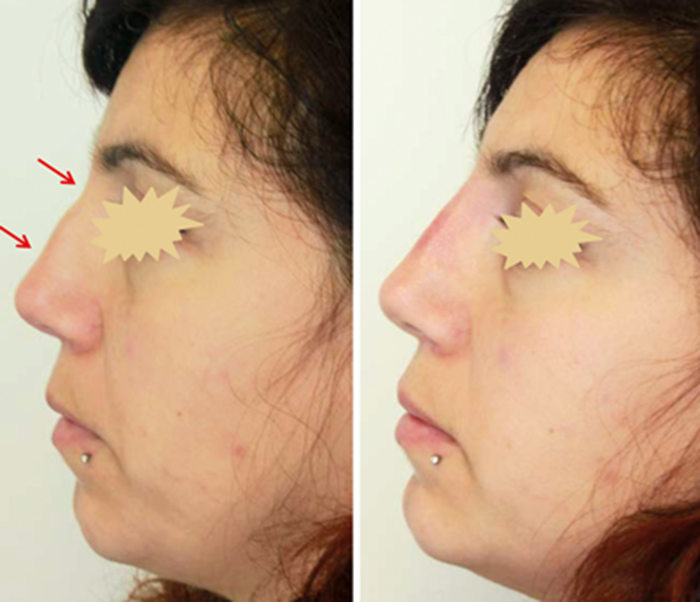 Figure 3: Before and after. Filling of the root and the distal portion of the nasal dorsum with hyaluronic acid.

Before proceeding with the treatment it is necessary to observe very deeply the relationship between the nose and the glabella, lips and chin. Corrections of the nose may require also the remodeling of the lips or the chin for a better harmony of the whole face. The patient should be in a semi-sitting position with the head reclined on the back of the operating bed, in hyperextension (110-120°), in order to have a comfortable working posture. Regional anaesthesia is very seldom required, though a topical anaesthesia will be useful if we inject near the tip of the nose.

For non-surgical correction of the nose I find it necessary to use two different products: for the correction of the bone profile, my choice is calcium hydroxyapatite (CaHA), because of its chemical composition; for correction of the soft parts, I normally use hyaluronic acid (HA). The CaHA is injected to the level of the periosteum, and I prefer a slow bolus injection with the needle perpendicular circa 90°, while with the thumb and the index of the other hand I try to contain the product strictly tangential to the greater lateral bony protrusion. Usually, a significant amount of product is required, and I prefer not to dilute the formulation to avoid altering its original composition. Where it is necessary, or for an optimum correction, a second session is performed after an interval of about one month from the previous one. On the other hand, HA is much softer and more malleable than CaHA, and with a medium density allows the injection of moderate quantity to the subcutaneous layer. I prefer a retrograde and linear injection, but sometimes, depending on the shape of the nose, I prefer the infiltrations in a radial pattern or in micro-boluses, using a needle or a cannula. I release the product almost tangentially to the skin at a 10-20° angle and inject small amounts by dividing the treatment into two or more sessions.

Possible adverse events and how to avoid them

The adverse event most feared is necrosis of the tip of the nose [6,7]. During the planning phase we should remember to avoid injecting near the foramen in order to save the vessels and the nerves located in the lower third of the nasal bone. We should also avoid deep injections near the alar cartilages. Injections into the dorsum and the nasal tip require a lot of attention, because different vessels pass through these areas and if squeezed or channeled the result may be compression, ischaemia or necrosis of the nasal tip [6,7].

Before the injection we should proceed with the aspiration to verify if the needle is into the lumen of the vessel. The injection must be taken very slowly with an eye on the changing colour of the skin – fleeting whitening could be an indication that the injection went into an artery, so you should stop immediately, massaging the area vigorously, and apply gauze soaked in warm water. Depending on the circumstances, we may need to use hyaluronidase and other therapeutic measures to prevent this dreaded event [6,7].

The appearance of bruises following the treatment may be considered a minor side-effect, but I suggest the use of iron chelating ointments to prevent hyper-pigmentation. This event can be solved without any major problems within a few days if we use the appropriate therapeutic measures.

The results of the treatment are instantly apparent. There are some rules for post-treatment. The treated areas should be remodelled and compressed for a few minutes, and antiseptic ointments applied. It is important to caution the patient to avoid very high or low temperatures, UV exposure, risky physical activities, or use of certain drugs, etc.

The rhinofilling treatment is very effective, long-lasting and there is no recovery period. The cost of treatment is fairly low and the degree of patients’ satisfaction is particularly high. 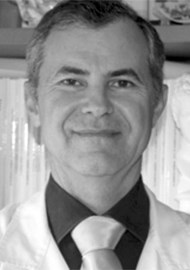