With the chin playing a vital part in facial harmony, genioplasty can have a hugely positive impact on patients’ self-esteem and quality of life. The authors share their expertise in the optimal techniques when performing an osseous genioplasty.

The perception of beauty is highly subjective; however, the chin is without doubt the strongest anatomical feature that plays a ‘pivotal’ role in three-dimensional facial harmony. Any deformity of the chin will adversely affect facial aesthetics which may contribute to a patient’s lowered self-esteem and ultimately in the long-term poor quality of life [1]. As reported by Posnick and colleagues [2], the negative effects of facial disharmony and the resultant positive effects following successful jaw surgery are well documented in the literature.

Genioplasty is a fundamental surgical technique that is primarily performed as either 1) an osseous or 2) an alloplastic procedure [3]. Our article will focus on the versatility of the ‘osseous genioplasty’ which was first described via an extra-oral approach by Hofer in 1942 [4,5]. This surgical technique was later modified by Trauner and Obwegesser in 1957 [5,6] to access the osseous chin via an intra-oral approach and can be employed to correct chin deformities in all three planes of space.

The most important muscle encountered during an osseous genioplasty is the mentalis muscle. This is a paired central muscle of the lower lip that originates within the incisive fossa just beneath the attached gingiva of the mandibular incisors and inserts into the dermis of the skin overlying the chin. The action of this muscle is to elevate and protrude the lower lip, in addition to causing ‘dimpling’ of the overlying skin of the chin. The motor supply of mentalis muscle is the marginal mandibular branch of the facial nerve. Other muscles that contribute to the osseous complex of the chin are the depressor anguli oris (DAO), depressor labii inferioris (DLI) and genioglossus along with the suprahyoid muscle group (anterior belly of digastric, mylohyoid and geniohyoid) which attach to the posterior aspect of the chin.

The mental nerve is the terminal branch of the inferior alveolar nerve which supplies sensation to the overlying skin of the chin and lower lip, as well as the labial gingivae of the mandibular incisor and premolar teeth. The nerve exits the mandible via the mental foramen which is located between the roots of the first and second premolar teeth, dividing into three terminal branches beneath the DAO muscle. It is important to note that the pathway of the mental nerve deviates away from the foramen prior to exit, in fact the nerve is reported to lie 5mm anterior and inferior before making a U-turn and exiting the mental foramen itself [3,5,7,8].

The blood supply to the chin region follows the corresponding nerve supply, namely mental and inferior alveolar arteries, in addition to a rich vascular supply from the labial branches of the facial artery.

It is of paramount importance to take a thorough medical history and perform an in-depth clinical assessment of the facial skeleton and overlying soft tissues to assess patient suitability for treatment. Ideally, the patient will have a fully erupted dentition thereby minimising the risk of damage to tooth roots with osteotomies and any active dental / intra-oral infections should be fully treated. Likewise, it is important to ascertain if the patient has undergone any previous orthodontic / orthognathic correction prior to considering osseous genioplasty. Conditions such as diabetes mellitus, poorly controlled hypertension, a history of smoking and / or medications (e.g. steroids / anticoagulants) which predispose to an increased risk of wound infection or bleeding should all be noted and ideally optimised or stopped prior to surgery.

During the consultation process, the clinician must also clearly identify if the patient’s concerns and expectations are both realistic and achievable. In addition it is important to pay careful attention to exclude any psychological conditions or symptoms such as body dysmorphic disorder (BDD) that might preclude osseous genioplasty. Careful patient selection is crucial for optimising a successful aesthetic and functional outcome following an osseous genioplasty.

The chin must be assessed for size, symmetry and position in all three planes (antero-posterior, transverse and vertical) in relationship to the maxillomandibular complex and other facial proportions such as the nose. For example, Riedel’s plane is an easy method to allow quick visual analysis of chin point. It is a straight line that connects the most prominent regions of the upper and lower lip with soft tissue pogonion (most anterior projecting surface of the chin) in a face with well-balanced facial proportions [3,5]. Microgenia (small chin) is clinically suggested by a chin point which lies posterior to this line in the sagittal plane, whereas macrogenia (large chin) is suggested by a chin point that touches or extends past Riedel’s line in the sagittal plane.

Likewise, a disproportionately large nose may give the appearance of a small chin and vice versa. An imaginary midline should bisect the chin allowing for the clinician to ascertain if the chin is in the ideal position and coincident with the dental centreline and subsequently facial midline. The depth of the labiomental fold is influenced by both the vertical height of the mandible and total facial length [3]. Lower lip eversion secondary to an excessive overbite or overjet may contribute further to a deepened labiomental fold.

In the literature, there are numerous classification systems [7,9] that have been developed for the dysmorphic chin in order to aid definitive surgical planning. The clinician must be confident in his / her ability to accurately assess the chin and associated facial relationships to determine osseous genioplasty is indicated alone or as part of a staged procedure with orthognathic surgery and / or septorhinoplasty.

“It is of paramount importance to take a thorough medical history and perform an in-depth clinical assessment of the facial skeleton and overlying soft tissues to assess patient suitability for treatment.”

The use of standardised medical photographs (frontal, three quarter oblique and lateral views) is highly recommended as they aid with aesthetic planning and patient discussion, and also provide an invaluable reference for post-treatment review and medicolegal documentation. Plain radiographs such as the orthopantomogram (OPG) and / or lateral cephalogram are invaluable in accurately assessing chin deficiency or excess, in addition to providing further information about the exact position of the mental nerve, tooth root apices and any co-existing pathology if present. Furthermore, the lateral cephalogram will allow for 2D cephalometric analysis as part of the surgical treatment plan should an additional orthognathic procedure be indicated. For more complex and challenging cases, a cone beam CT may be indicated thereby allowing full 3D analysis of the facial skeleton and via computer-aided design / computer-aided manufacturing (CAD / CAM) technology the fabrication of surgical stents / alloplastic implants should the clinician decide [5].

Surgical procedure: how we do it

The osseous genioplasty is a versatile surgical technique that allows one to correct many chin deformities in all three planes (horizontal, vertical and transverse dimensions) [3-6,7,8,10]. Worldwide, the technique is highly favoured by surgeons due to its stability, predictability, low rates of complications and most importantly it is associated with high levels of patient satisfaction [8,11]. Over the years, there have been numerous modifications to the classical osteotomy described for osseous genioplasty, in order to further improve aesthetics (lower mandibular border / cervicomental angle) and minimise inadvertent damage to the mental nerve [3-6]. Following surgical osteotomy, the resultant distal bone segment can be freely manipulated into its final position determined by the findings of the preoperative facial evaluation.

According to the specific movements of the distal segment, the genioplasty can be described as [3,5,12]:

To further improve the final aesthetic outcome of genioplasty, the technique can be combined with the use of an interpositional bone graft (for extreme / complex deficiencies), submental liposuction / lipectomy and other orthognathic procedures [3,5]. In this article, we describe our approach to the sliding advancement genioplasty which we believe is safe, reliable and easily reproducible.

Advancement genioplasty is performed under general anaesthesia via nasotracheal intubation. The operative field is cleansed with aqueous povidine iodine (betadine) and the patient draped exposing the entire face with sterile drapes. 2% lignocaine with 1/80,000 adrenaline is infiltrated into the lower gingivobuccal sulcus to provide anaesthesia and haemostasis. We use a photographic retractor to retract the lips and make a full thickness mucoperiosteal incision from canine to canine, with an inverted ‘V’ shape to preserve the labial frenulum (Figure 1). 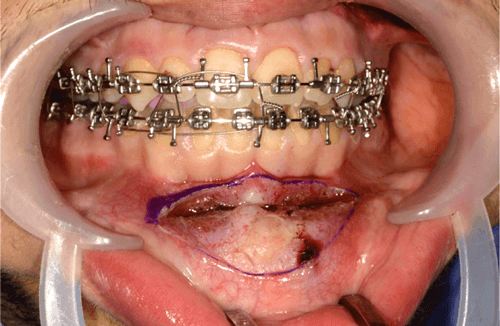 It is crucial to leave a cuff of mentalis muscle attached to the symphysis to allow for resuspension of the muscle and avoid excessive stripping of the soft tissues to minimise the risk of inadvertent lower lip / chin ptosis and preserve blood supply to the distal osteotomised portion of the mandible. Subperiosteal dissection continues such that the entire anterior bony chin is exposed and extends laterally to identify the mental foramen and its associated neurovascular bundle. Once identified, we protect the nerve by placement of a surgical instrument positioned anterior to its exit from the foramen.

Using a surgical marker, the planned osteotomy line is marked at least 5mm inferior to the anterior tooth root apices (noting that the maximum average length of the canine tooth is 25-27mm) and the mental foramina. The chin midline is scored between the lower central incisors to ensure accurate symmetrical alignment during rigid fixation (Figure 2). 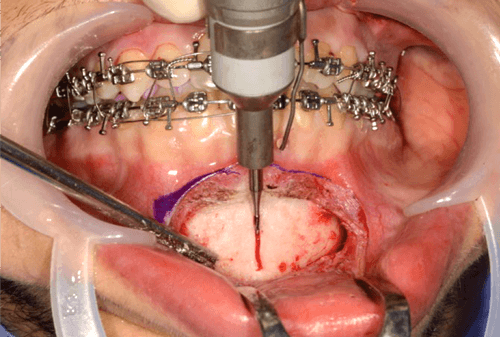 We use a reciprocating saw to perform the osteotomy cut in an inverted ‘v’ shaped fashion (Figure 3). 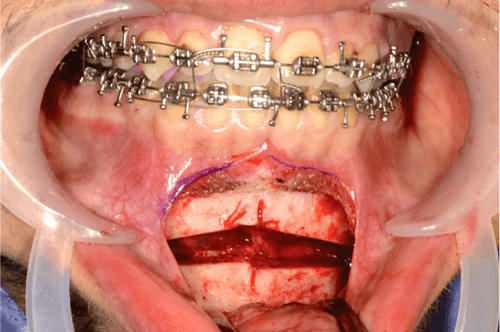 Following down fracture of the distal segment, it is fully mobile and can be advanced into the pre-planned final position, ensuring good bone to bone contact between segments to optimise healing. The senior author fixes the osteotomised chin with two pre-bent 2.0 mandibular titanium plates (Figure 4). 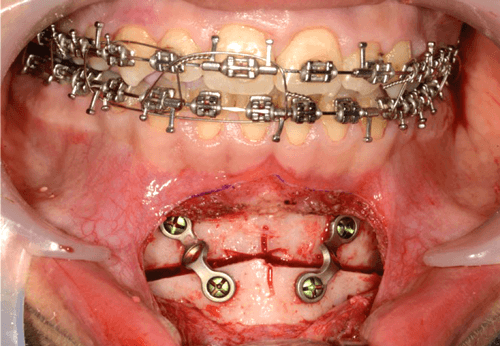 Both the mentalis muscle is re-suspended and mucosal incision is closed with 4/0 Vicryl Rapide (two layered closure) (Figure 5). 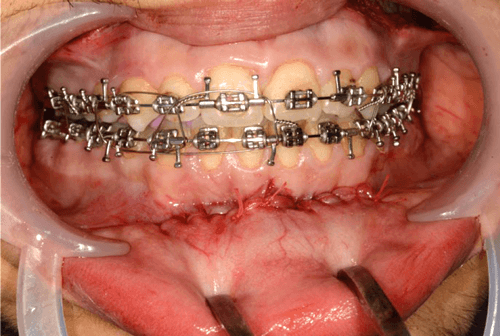 We support the overlying soft tissues with a pressure chinstrap dressing which remains on for at least 24 hours. We instruct our patients to maintain an optimal level of oral hygiene and to complete a five-day oral course of antibiotics.

To note, if vertical reduction is needed then inferior movement of the osteotomised distal segment into the desired position is required in addition to the use of an interpositional graft which may be either autogenous bone or alloplastic bone products. If vertical reduction or horizontal setback is sought after, then typically a second osteotomy is performed with the intervening wedge of bone often being used as a bone graft.

In our opinion, the osseous genioplasty is a simple and effective surgical technique to learn and is associated with few complications. Of those reported [3,5,7,8,10], we list the following:

In the literature, it is reported that there is a higher incidence of neurosensory deficit following bilateral sagittal split osteotomy combined with osseous genioplasty secondary to the phenomenon of a ‘double crush of the inferior alveolar nerve [13,14].

“The osseous genioplasty is a simple and effective surgical technique to learn and is associated with few complications.”

To conclude, the osseous genioplasty is a safe, reliable and accurate surgical technique yielding high levels of patient satisfaction. It is an effective method that is used to contour the lower face for a wide range of chin deformities in all facial planes in addition to complex dysmorphologies. Compared to alternative techniques for chin augmentation, such as the use of alloplastic chin augmentation or dermal fillers, we believe that the osseous genioplasty produces a far more natural aesthetic and functional stable result. She has completed the prestigious TIG Fellowship in Reconstructive Aesthetic Surgery and has been awarded an MSc in Skin Ageing & Aesthetic Medicine with Merit, from the University of Manchester. 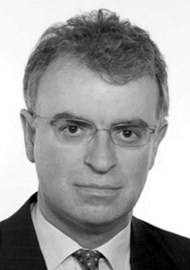