The term facial palsy is most commonly used to describe a paralytic lower motor neurone (LMN) dysfunction of the facial nerve. Upper motor neurone facial palsy, for example due to strokes and intra-cranial tumours, spares the forehead muscles and will not be covered further. LMN facial palsy results in weakness of the muscles controlling facial expression and eye closure.

It commonly presents with functional effects due to asymmetric activation of the muscles of facial expression and disruption of eye closure. Depending on the cause, facial palsy can be classified as either incomplete (weakness) versus complete (total paralysis) or as partial or complete. Other symptoms may be present depending on the site of the lesion along the nerve’s course and include dysgeusia (loss of taste) over the anterior tongue, hyperacusis and impaired lacrimation. The UK incidence of LMN palsy ranges from 30-40 per 100,000 per year [1].

Neuroanatomy and types of facial palsy

The facial nerve, comprising motor and sensory roots, emerges from the brainstem on a tortuous common pathway inside the cranium. It enters the facial canal and finally exits the stylomastoid foramen to supply the muscles of facial expression and the auricle and receives sensory fibres that carry taste information and parasympathetic fibres that control salivation. A lesion anywhere in the pons, or outside the brainstem in the posterior fossa or the bony canal or the middle ear or even outside the skull, results in a LMN facial palsy. This palsy can be caused by a variety of conditions, seen in Table 1, but a majority of these have an uncertain aetiology of either familial or viral origins and are clustered under idiopathic facial paralysis (IFP) or Bell’s palsy, after the celebrated Scottish anatomist who first described it [1,2].

For every patient with facial palsy, a careful history covering the range and onset of symptoms with a systematic review for infections and inflammatory conditions is paramount to exclude and treat the identifiable causes. This is followed by a physical examination for qualitative assessment of facial musculature movement, a neurological examination of all the cranial and peripheral nerves including cerebellar testing, a thorough head and neck examination with additional tests for salivation, tearing, taste and hearing. Specialists employ many scales to objectively describe facial nerve dysfunction in patients with facial palsy, the most common one being the six-grade House-Brackmann scale where 1 signifies normal facial function, 6 total paralysis with no movement, and the intervening grades classifying degrees of worsening asymmetry and weakness in facial muscles. More recently the Sunnybrook Grading scale has gained popularity as it provides better precision [3]. These are selectively supplemented by further investigations with specialist serology or imaging modalities such as CT, chest x-ray and MRI to confirm a diagnosis. Electromyography is sometimes used for prognostication or to aid treatment planning.

Facial palsy should ideally be managed in a multidisciplinary team comprising surgeons, physiotherapists and psychologists. The importance of the latter has been highlighted in recent reviews [4]. Referrals by primary care and emergency department physicians to the specialists is paramount for optimum recovery and to prevent complications. As a general measure for a majority of facial palsy patients where no aetiology is found, reassurance and attentive eye care should be every clinician’s first priority in management. Corneal exposure can lead to irreversible blindness which must be prevented by prescribing and recommending frequent use of topical lubricants such as preservative-free eye lubricants. Use of tape or an eye-patch to help close the eye during periods of sleep is also a key recommendation, as is early referral to an ophthalmologist if the cornea remains exposed despite all attempts to close the eye [4].

Patients with Bell’s palsy should take corticosteroids as soon as possible after onset and no later than 72 hours of onset of symptoms to ensure faster and complete recovery. This prescription is usually Prednisolone given either as 25mg twice daily for 10 days or 60-80mg orally once daily for one week reduced gradually in the second week. Pairing this prescription with anti-herpes simplex antivirals in the absence of signs of viral infection (vesicles / ulceration of ear canal, throat, tongue or palate or severe mastoid pain), has shown no increased benefit in recovery from palsy and is now considered unnecessary [4]. It is recommended that all ambiguous, recurrent, bilateral and slow recovering cases of facial palsy are referred urgently to an ENT / skull base specialist to rule out a sinister underlying cause. Delayed recovery of facial palsy (later than four months) increases the likelihood of incomplete recovery or synkinesis (involuntary facial movement occurring with voluntary movement of a different facial muscle group, e.g. contraction of mouth corner on blinking). A referral to a specialist centre may minimise the sequence of contralateral hyperkinesis (over-activity of the unaffected side due to unopposed muscle contraction), or secondary contracture due to untreated synkinesis. It is vital that a therapist trained in managing facial palsy undertakes physiotherapy. Treatment ranges from massage, stretching, taping, biofeedback training to injections of botulinum toxin. Finally, a referral to a surgeon with special interest in facial reanimation is necessary if the patient continues to have residual paralysis six months after diagnosis [1,3,4]. 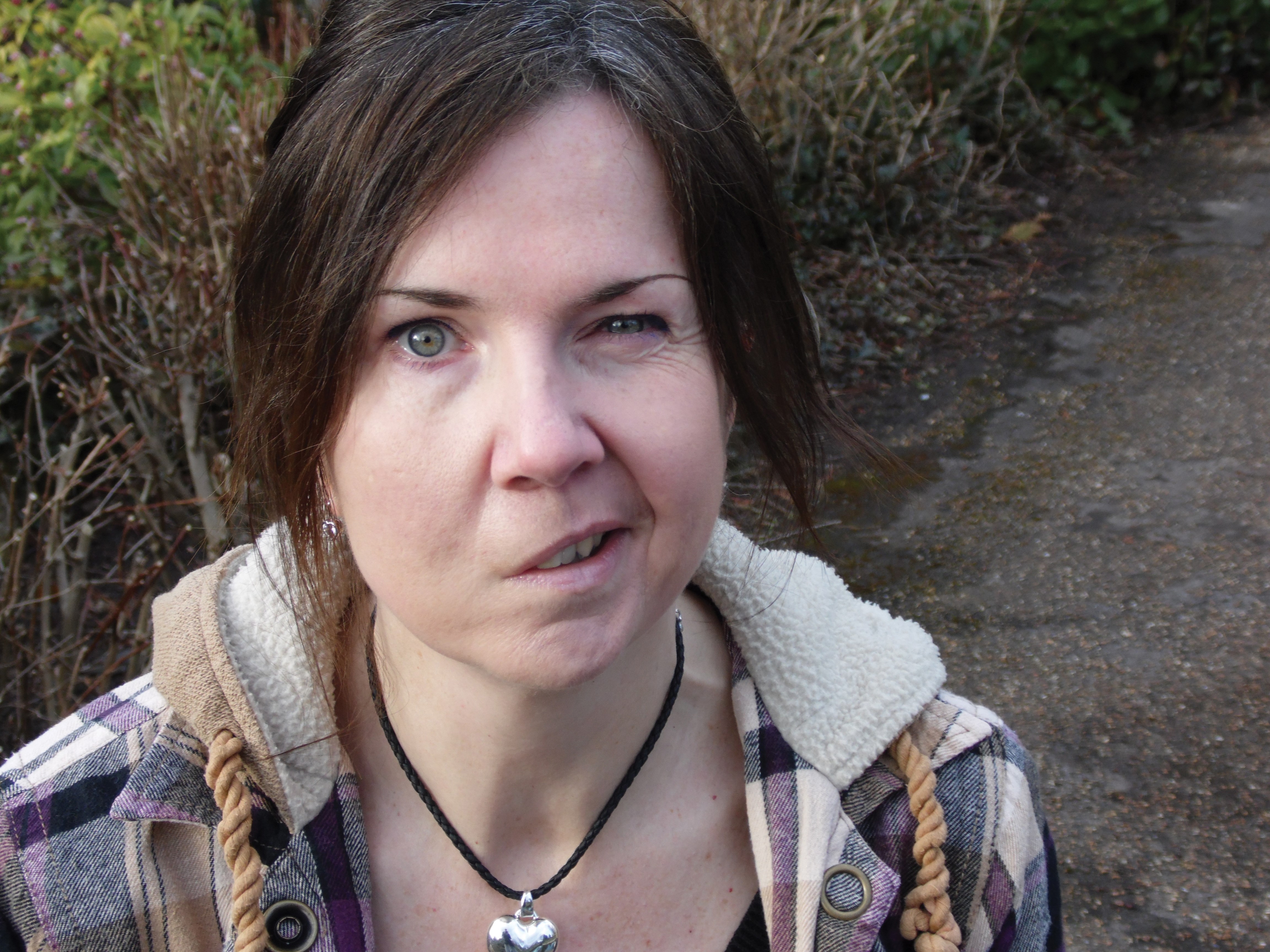 A patient who has just been diagnosed with Bell’s palsy for the fourth time.

There are many operations that are available for patients with facial palsy [5]. The aim is to restore eye protection, oral competence and facial symmetry. Ideally patients should achieve full and spontaneous facial expressions with minimal surgical stigmata, however, this is rarely achievable. Facial symmetry and function may be improved in the upper third of the face by performing a brow lift (endoscopic in younger patients), upper eyelid loading with gold or (ideally) platinum weights. For the lower eyelid, a suspension procedure such as a canthoplasty may be supported by a mid face lift. The lower face may be managed by a static sling in older patients, or ideally a dynamic muscle transfer in younger patients. Smile surgery may be innervated by the trigeminal nerve (temporalis myoplasty) or free flap coapted to the masseteric nerve. Alternatively a free muscle flap may be coapted to a previously placed cross facial nerve graft. The hypoglossal-facial anastomoses can restore facial tone quite effectively, although at the expense of inevitable tongue-facial synkinesis [5].

With an insult to movement of facial musculature, what causes most concern is that the facial palsy results in a three-pronged disruption in the faculties of speech, mastication and expression of moods, thoughts and emotions. These impediments, compounded by the initial and understandable inexperience of patients to work around them, may unleash an intense psychological trauma that far outlasts the aesthetic and functional inconveniences. This facet of facial palsy is seldom appreciated by those who have not suffered from it. For the duration of the facial palsy, which can be anywhere between weeks and years, patients across the ages, genders and personality types report a profound negative impact on self-image and self-esteem. As the anxieties of participating in social situations with the new disfigurement add to the misguided or non-empathic responses of the people around them who usually perceive this to be a solitary cosmetic issue, the majority of patients with facial palsy usually resort to evading society, or seek employment and living options that do not require much face-to-face engagement. Without any psychological guidance, there is a significant prevalence of anxiety and depression [6]. 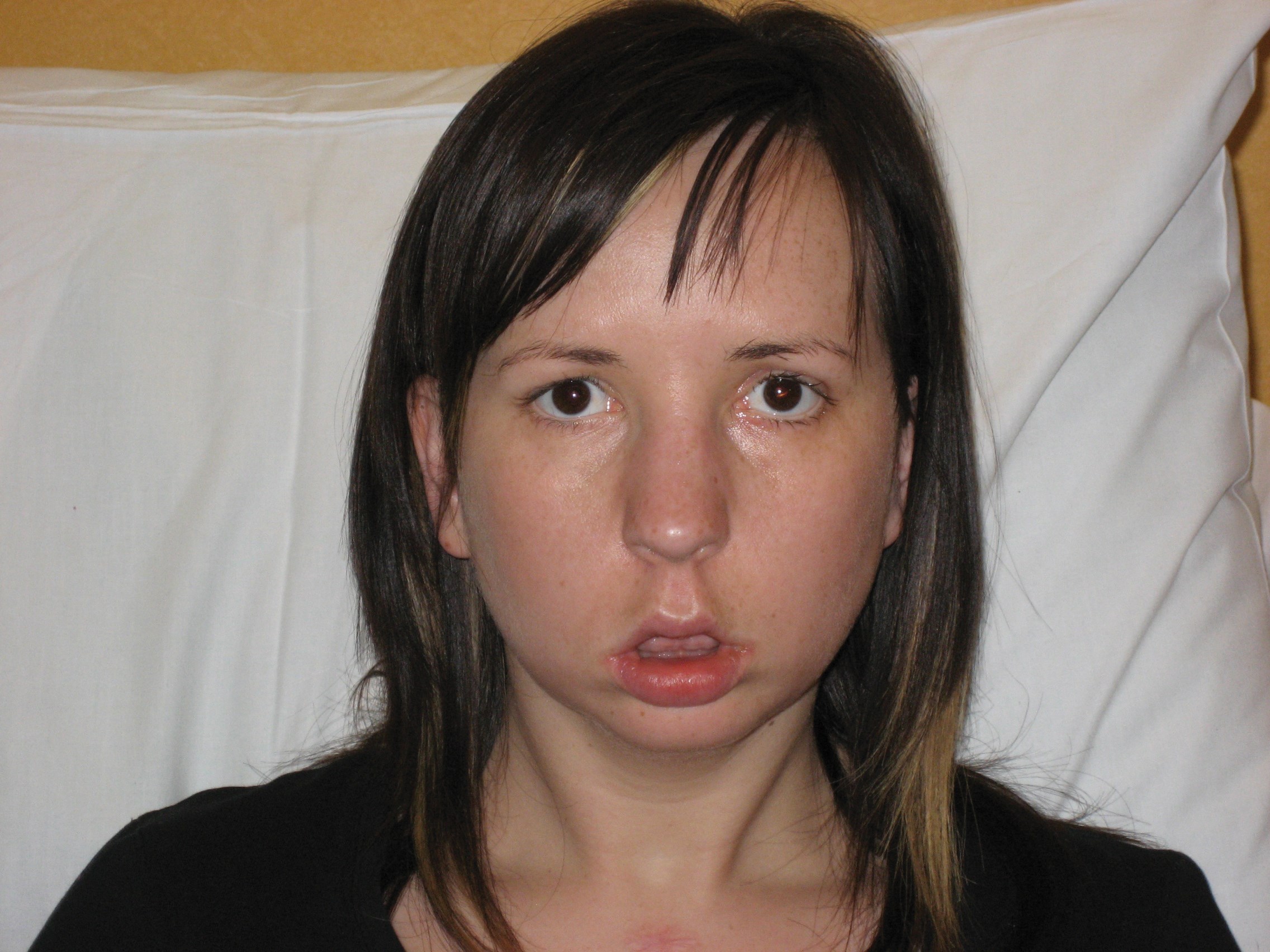 A charity called Facial Palsy UK was established in 2012 to fill this chasm in provision of services for patients with facial palsy to ensure sound physical, emotional and psychological health. The charity aims to improve understanding of facial palsy among the general public, promote training of more specialists to improve access to treatments, erect a nationwide support network by providing support to people affected by facial palsy through patient support groups and online forums, and raise funds for focused research into causes and new treatments [7].

In the three years since its inauguration, the charity has managed to build a support network with support group meetings held countrywide in Birmingham, Bristol, Cardiff, Cornwall, East Grinstead, Edinburgh, Manchester, Newcastle, Norwich, Sheffield and York, with more support groups planned for London this year. The meetings are sustained by a small, dedicated team comprising facial rehabilitation therapists and support co-ordinators. Feedback from attending patients and relatives acknowledge the benefit from meeting other patients, seeing the results of treatments, obtaining coping strategies and the catharsis of sharing their experiences of living with facial palsy with other patients. The charity continues to maintain a comprehensive online resource with its continuously updated website which contains information and multimedia on all aspects of facial palsy for children, adult patients, relatives and health professionals alike. There is a section containing patient case stories which anyone considering specialising in facial palsy needs to read.

With close to 400 direct support enquiries and 72,500 unique website visitors every year, the charity’s website (www.facialpalsy.org.uk) is slowly becoming an authoritative one-stop guide for anyone seeking support and information about facial palsy [7].

Besides the expansion of its support services project, the charity has a new dedicated awareness campaign with novel initiatives during awareness weeks such as Face a New Day 2015, a thriving volunteering community, art competitions for children and fundraising opportunities by running marathons such as the Brighton Marathon (12 April 2015) and the Great North Run (13 September 2015).

It is hoped that through the charity, there will be improved awareness, better service provision, consistent allocation of resources across the country for the patients and their relatives, and that the patients will be able to surmount the challenges posed by facial palsy better than they ever have in the past [8].

Health professionals wishing to volunteer their services or fundraise should contact: professionals@facialpalsy.org.uk 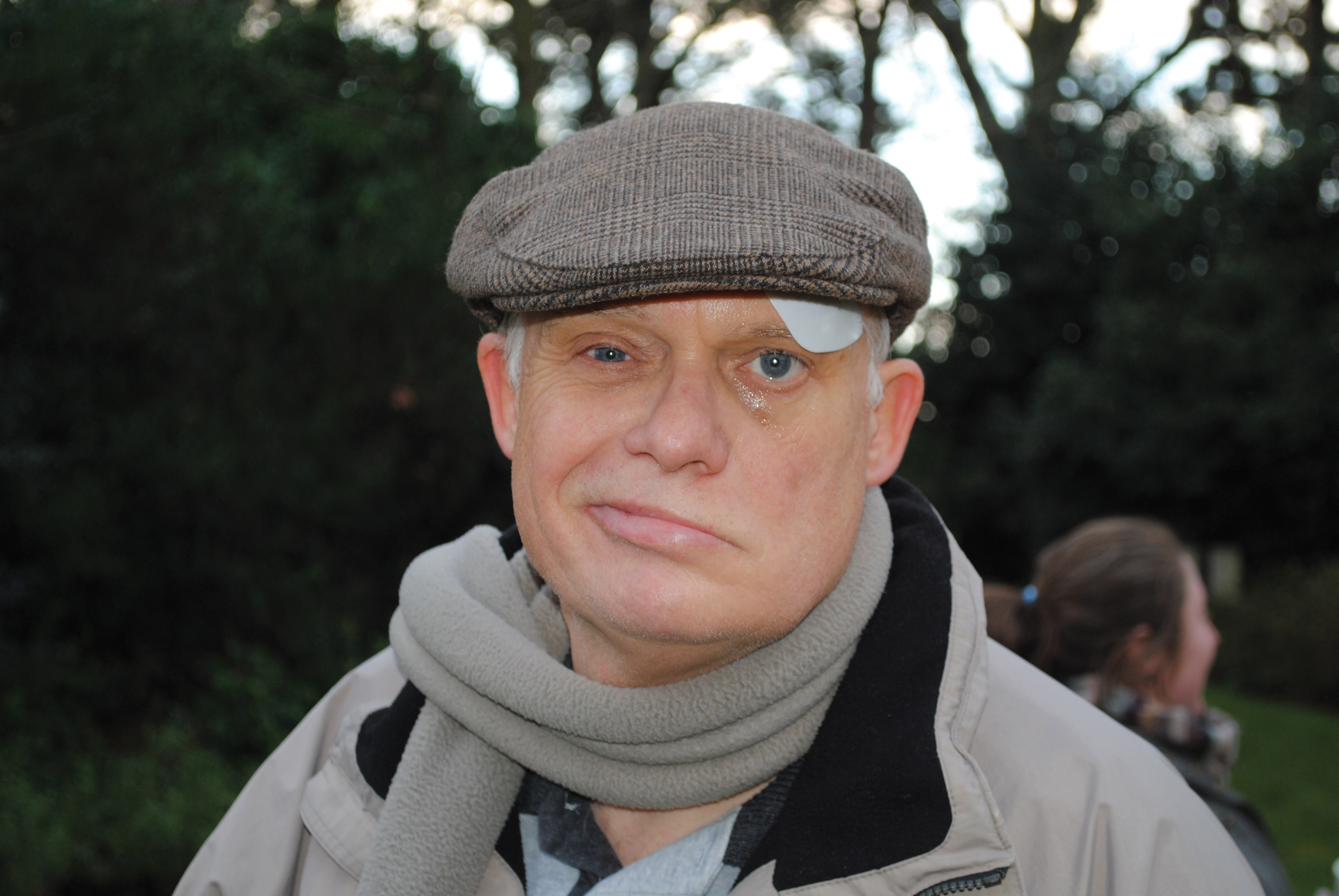 An older male with Bell’s palsy.

SAVE THE DATE 1 - 7 March 2016
Aiming to raise awareness
and highlight the social,
physical and psychological
consequences of living
with facial paralysis

Declaration of competing interests: Charles Nduka performs facial reanimation procedures both on the NHS and privately. He is acting CEO (unsalaried) of Facial Palsy UK. Has been awarded research funding from Trust and the National Institute for Health Reseaech for the development of technologies to monitor facial muscle activity. He has previously acted as a consultant to Allergan. 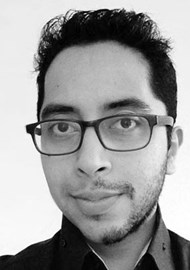 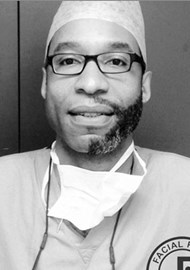