Our association was born in 2007, originally under the name SmileTrain Italy Onlus, with the aim of operating on children affected by cleft lip and palate in the developing world, offering them the possibility to smile and to have a normal life. Smile Train achieved the official recognition of a non-governmental organisation (NGO) in 2012 and in January of 2013 we chose to change the name to Emergenza Sorrisi – Doctors for Smiling Children. This change has allowed us to extend our activities, including the improvement of local social and healthcare situations, becoming an autonomous Italian association and independent from Smile Train Inc.

Emergenza Sorrisi is an association made up of voluntary medical specialists in plastic surgery, maxillofacial surgery, anaesthesia, paediatrics, nursing and logistical experts. All our doctors are volunteers and give their time and services free of charge to contribute to the success of the work of the organisation. The nine members of the Board and three members of the College of Auditors for the charity are also unpaid.

Our NGO is divided into various areas of expertise:

Emergenza Sorrisi has over 260 tireless volunteers from hospitals across Italy and they represent a fundamental part of the association, allowing us to achieve our objective of restoring smiles to children.

Cleft lip and palate in children can lead to disfigurement of the face, feeding difficulties, a higher risk of respiratory infections, orthodontic problems, and speech and language issues. In much of the developing world these children have little or no access to surgical treatment. Moreover, in some cultures, the whole family of an affected child can be isolated and excluded from the life of the community due to spiritual and supernatural beliefs as to the cause of the condition.

There are no simple solutions to address the inequalities in access to healthcare between different countries and cultures; however, we are proud to be able to say that the volunteers of Emergenza Sorrisi have contributed to the training of hundreds of local doctors in the safe surgical treatment of cleft lip and palate (the surgical operation to resolve the malformation is completed in 45 minutes and costs on average 250 Euros for Emergenza Sorrisi).

In addition to children born with facial deformities, such as cleft lip and palate, Emergenza Sorrisi is also committed to helping the many others who are left seriously injured as a result of conflict and war. We organise surgical missions in many areas where the population is affected by these issues, including Iraq, Kurdistan and Bangladesh. 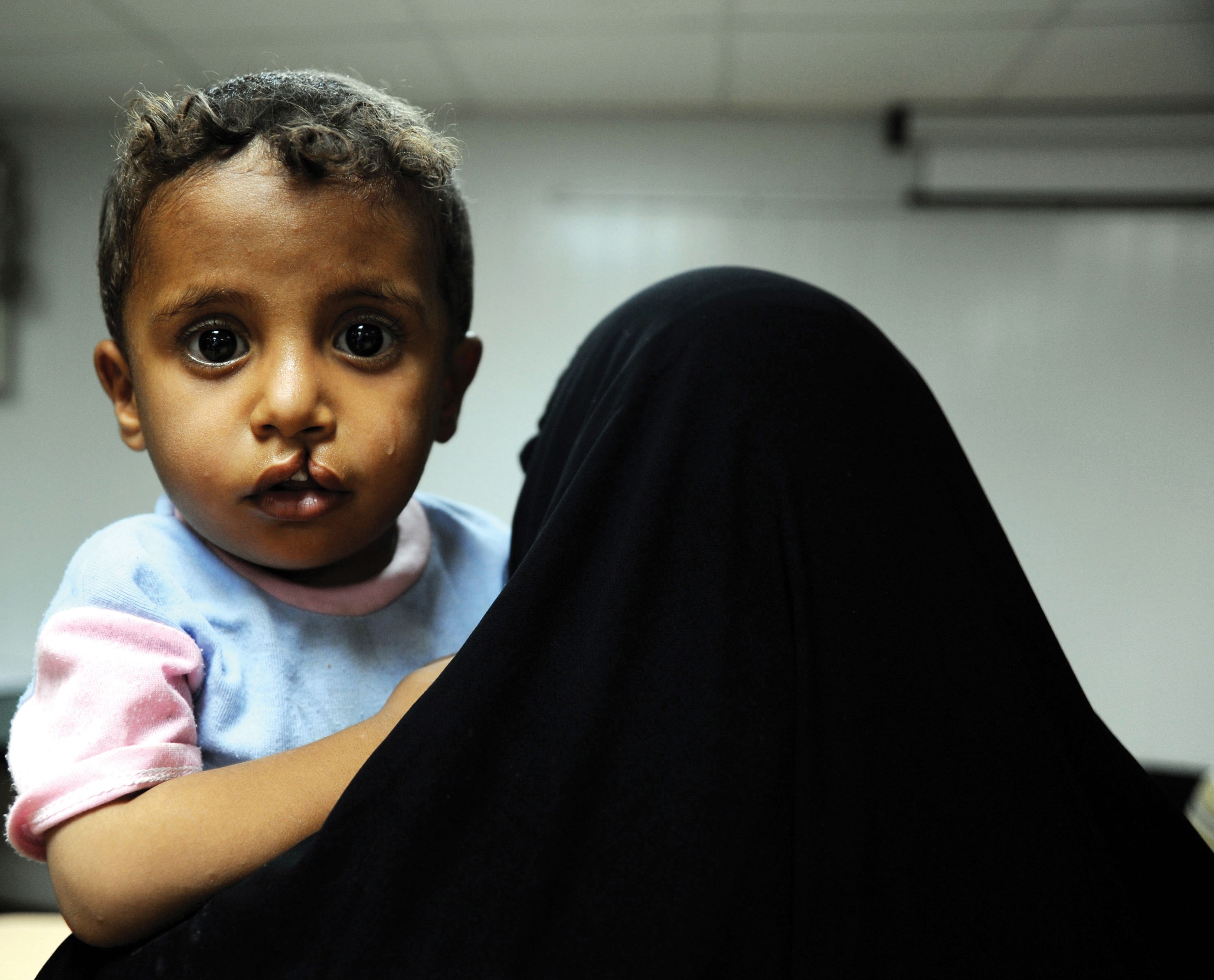 In June 2015, Emergenza Sorrisi undertook a surgical mission to the Habbobi Teaching Hospital in Nassiriya, Iraq. The 10-day mission
was divided into preoperative screening, surgery and postoperative visits; 150 children were assessed and over 90 children were operated on. In addition, local Iraqi doctors were trained in the surgery enabling them to offer independent specialised care to their patients in the future.

Dr Fabio Massimo Abenavoli, voluntary surgeon and President of Emergenza Sorrisi, led the team of 11 voluntary doctors and stated, “The Iraqi children are paying the price of a 10-year conflict; it is estimated that in modern conflicts over 90% of the victims are civilians, above all women and children. We are committed to ensure that no child must suffer from a resolvable pathology. For this reason we work to create centres of excellence that can operate in full autonomy to help all those people in need.”

Case study 1 – Zahra
Zahra, from Iraq, was eight months old when Emergenza Sorrisi surgeons first operated on her in December 2014. She was already at an advanced stage and, for this reason, doctors decided to operate in Rome. The figures show the situation before the operation and postoperatively. We met her again in Nassiriya, during the 2015 mission. Before the arrival of the doctors of Emergenza Sorrisi, Zahra had no chance of treatment and was condemned to a life of alienation. Following the surgery, the correction to her lip has made room for a beautiful smile. Her palate has been closed, so now Zahra can eat without problems and she is beginning to speak. Her life has changed permanently. 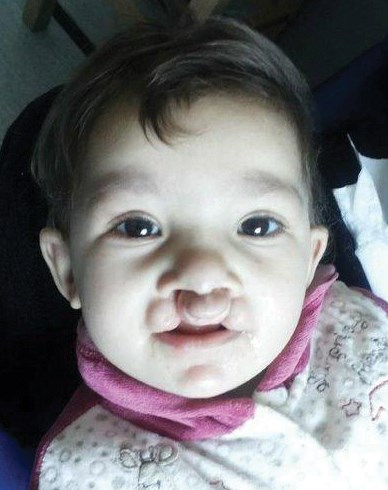 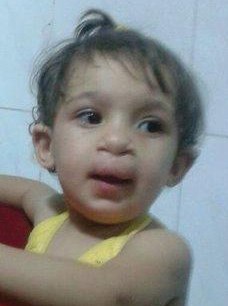 Case study 2 – Lawani
Neurofibromatosis T1 has left 24-year-old Lawani’s face deformed and lacerated. In his home country of Benin there was no possibility of treatment until the arrival of Emergenza Sorrisi offered him and his family new hope. Lawani was transferred to Italy, where he has been operated on by Dr Fabio Massimo Abenavoli with the collaboration of Professor Sandro Pelo, Director of the UOC of Maxillofacial Surgery at the Policlinico A Gemelli (see figures for before the operation and postoperatively). 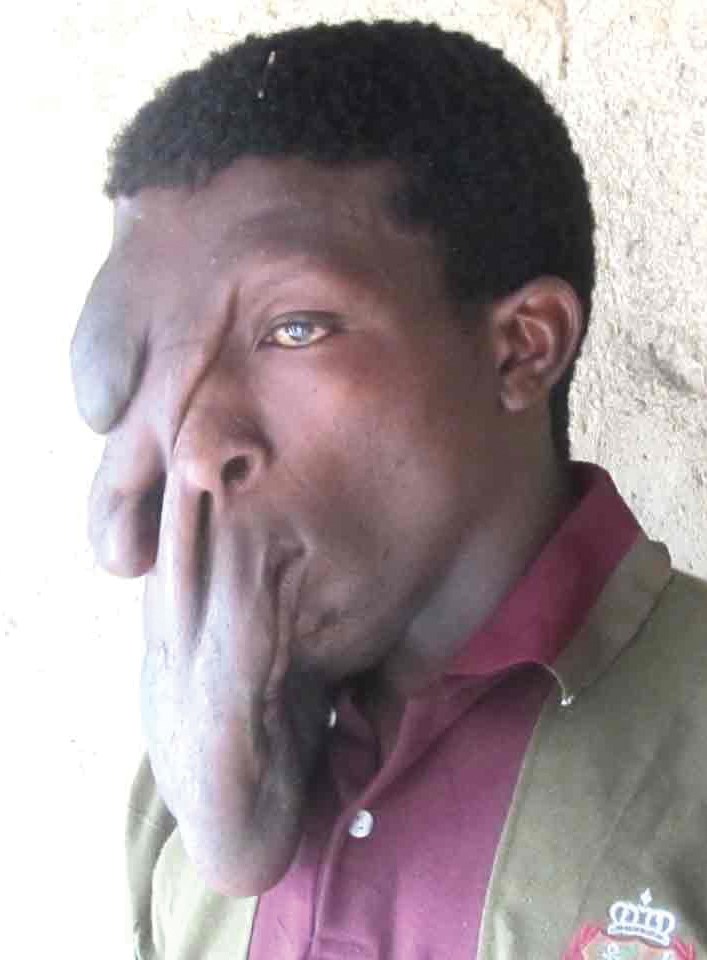 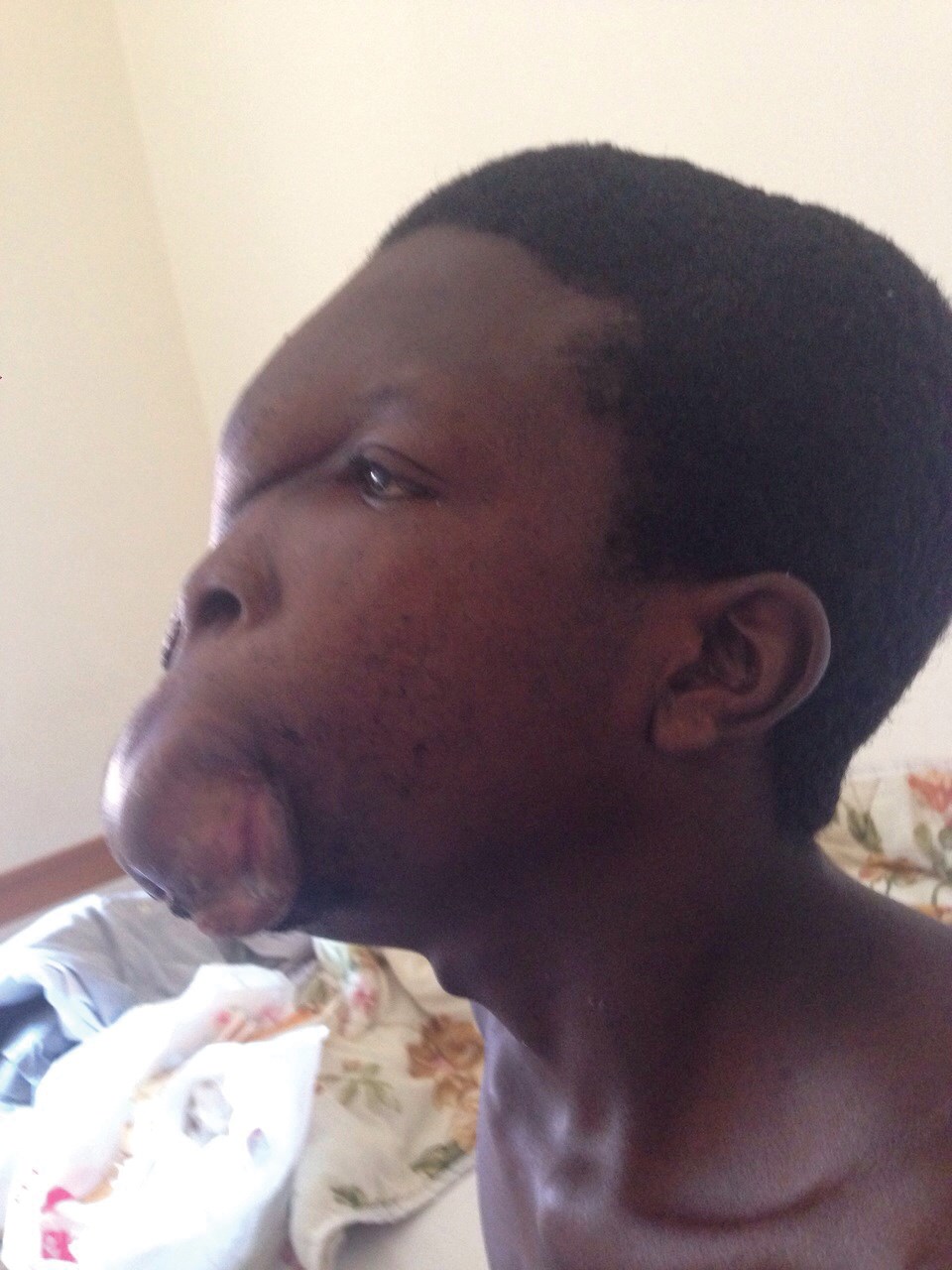 Development of local centres of excellence

Emergenza Sorrisi visited Benin for the first time in 2010 where we met local doctor Eustache Akoto. He was immediately available to collaborate with us offering efficient help in the organisation and realisation of our surgical missions. The support of Dr Akoto has been fundamental in the launch of Emergency Sorrisi Benin, a local NGO, that, with the contribution of a team of specialist and local staff, will be able to operate autonomously on children with serious facial malformations. Eustache Akoto can be contacted on eustacheakoto@yahoo.fr for further information.

Our first surgical mission in the Democratic Republic of Congo was in conjunction with the University Clinical Hospital in Bukavu, with the great collaboration of Dr Polepole Tshomba. In all subsequent missions, Emergenza Sorrisi volunteer surgeons have trained the local doctors in the theoretical and practical care of cleft lip and palate. This strong and constant collaboration with Dr Tshomba, has allowed us to establish Emergency Sorrisi Congo in 2015, another local NGO that, like the one in Benin, will be able to operate autonomously.

Polepole Tshomba can be contacted on polepoletshomba@yahoo.fr for further information. 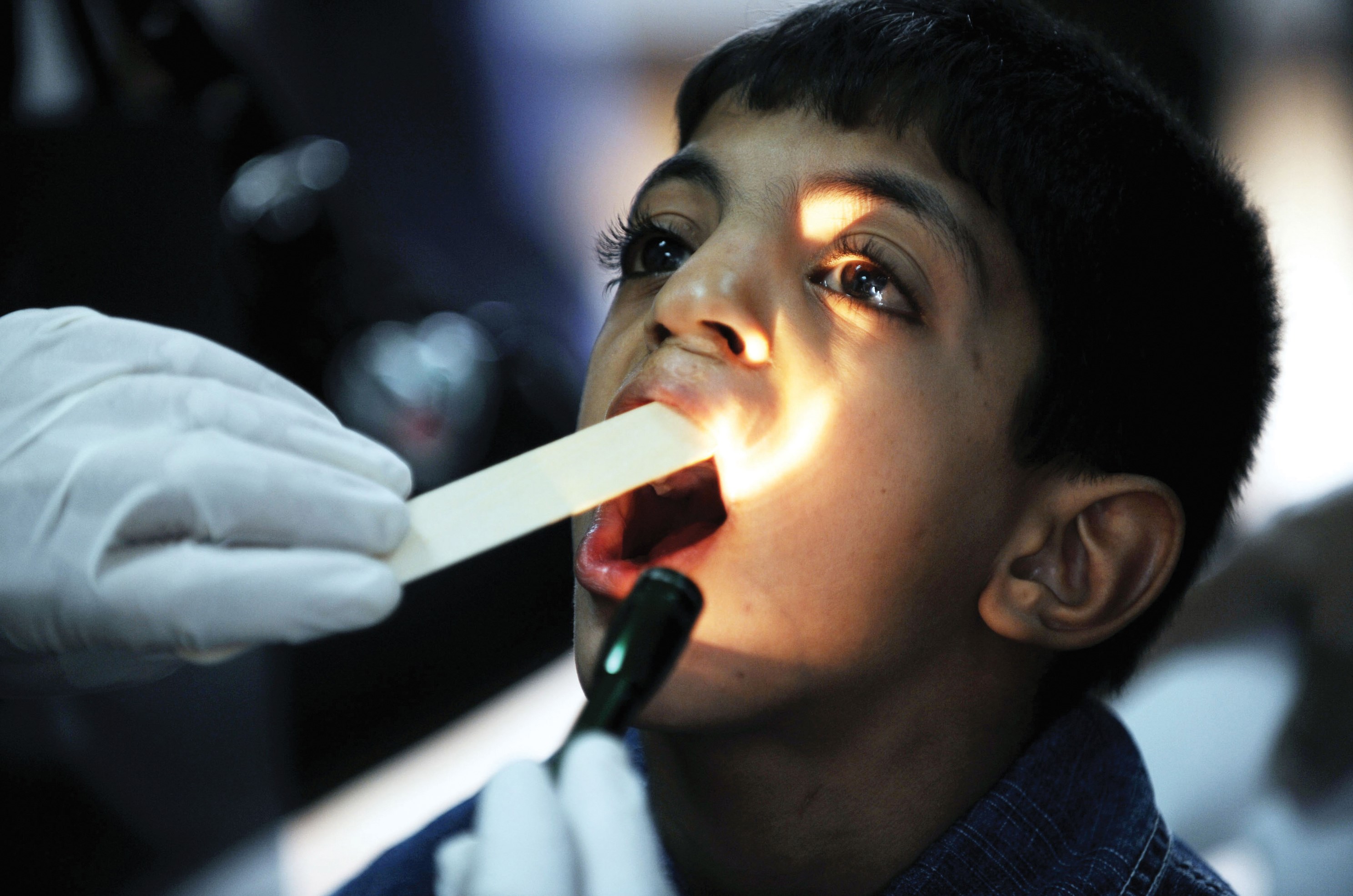 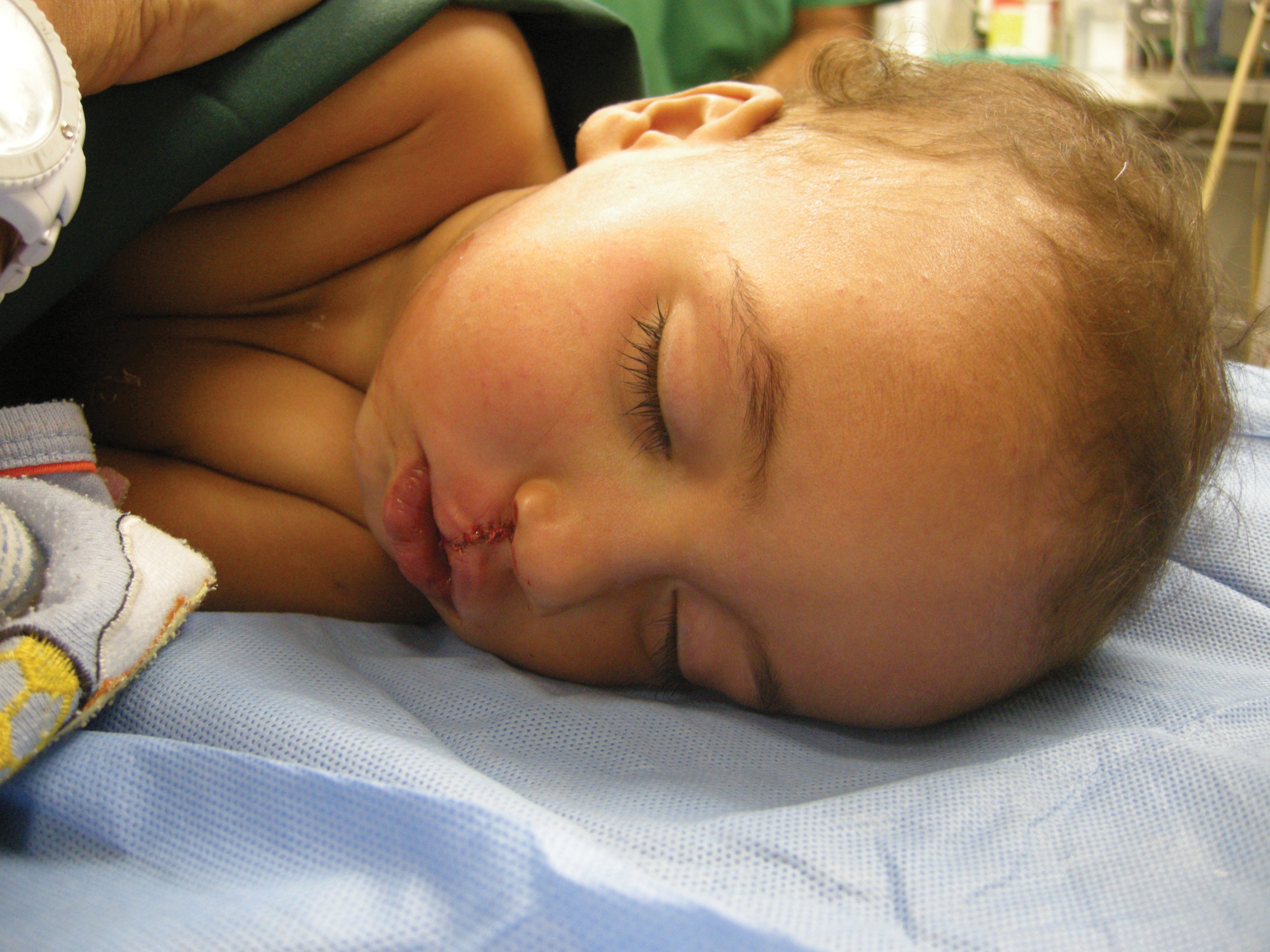 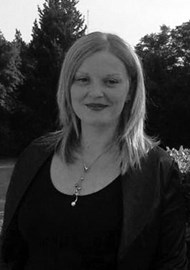 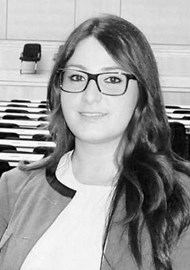