Facial aesthetics in the lower facial third is strongly influenced by mandibular profile with the mandibular angle playing an important role. The youthful appearance of a well-defined jaw line and angle, which is regularly seen among leading movie actors, is a goal that facial aesthetic surgeons strive towards. This article describes three surgical techniques to augment the deficient mandibular angle. The first technique relies on a hydroxyapatite (HA) particulate-fibrin onlay sculpting technique. The second is based on a modification of the bilateral sagittal split osteotomy and thirdly there is the innovative method of customised CAD-CAM titanium prostheses. These techniques, including their advantages and disadvantages, will each be covered in detail. 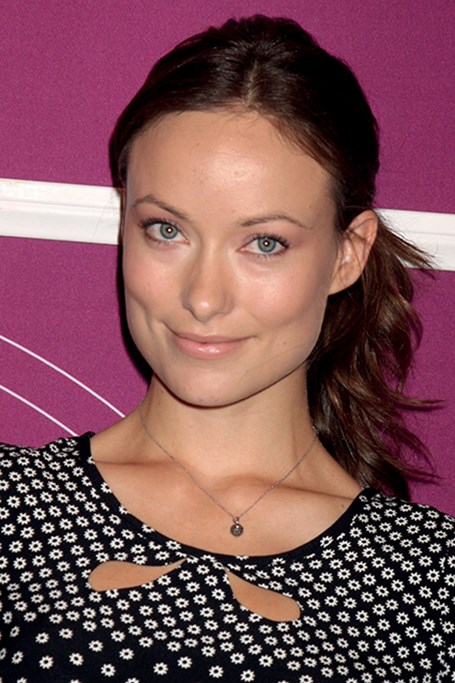 The primary focus of orthognathic surgery is to achieve facial and occlusal harmony by correctly orientating the jaws. Through evolution, orthognathics has metamorphosised into orthofacial surgery, with combined facial aesthetic approaches to the nose, cheek, zygoma, lips, chin and mandibular angles [1]. In the age of the ‘selfie’ orthognathic patients seeking corrective surgery are developing greater demands for harmonisation and gender definition of extragnathic deformities. In particular, men are requesting stronger jawlines and women, softer profiles.

Gender-defining mandibular angles assessment and planning must be in 3D. Traditionally, the jaw angle or gonial angle is determined in profile (sagittal plane). In orthodontic literature, the jaw angle is merely a two dimensional angle formed by the horizontal and vertical ramus of the mandible.

The mean angle in males is 128° (+/- 2.36°) and in females, 126° degrees (+/- 2.41°) [2]. Interestingly, the mean values are uniform for both sexes but the angle is subject to bias. A relatively short vertical or horizontal mandibular component may result in an obtuse angle (Figure 1). Contemporary literature addressing the transverse relationship is limited. In the frontal view, the mandibular angle is influenced by skeletal form, masseteric muscle volume and the overlying skin drape. There is a growing trend among female actresses, such as Olivia Wilde and Angelina Jolie, to show a relatively wide intergonial distance. These subtle facial traits are steadily filtering down to the desires of patients and the shape of the mandible is becoming an increasingly important gender determinant and makes the sole reference of the gonial angle obsolete.

The purpose of this article is to present three techniques that allow jaw angle augmentation in different directions. 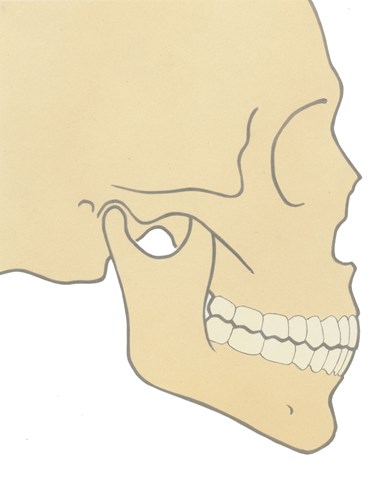 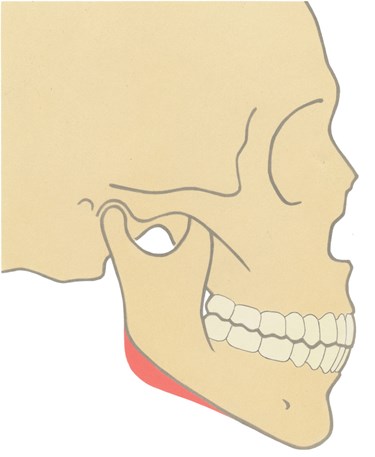 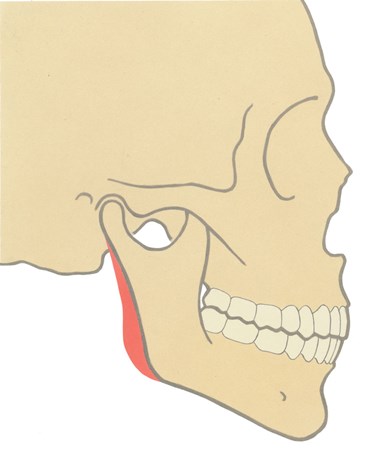 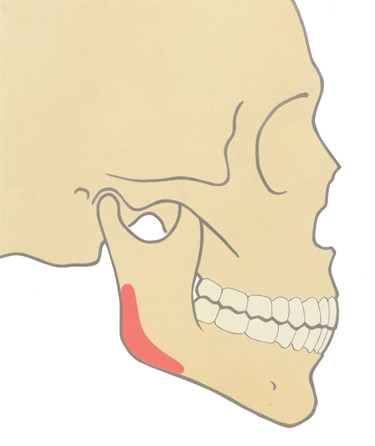 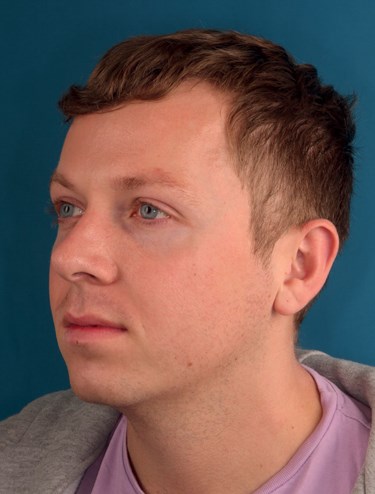 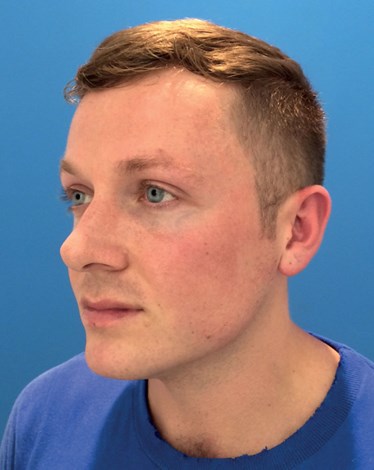 Figure 2b: Above and top: Six months postoperatively after later HA/fibrin glue onlay and sliding genioplasty.
Stretch of the soft tissue separates the face from the neck and returns a youthful appearance. 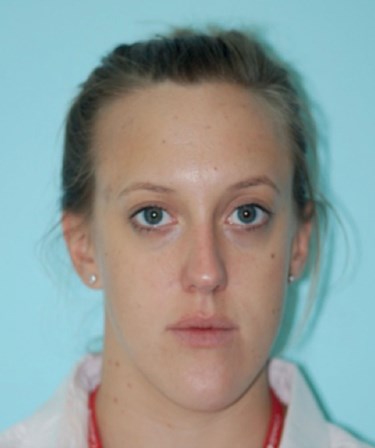 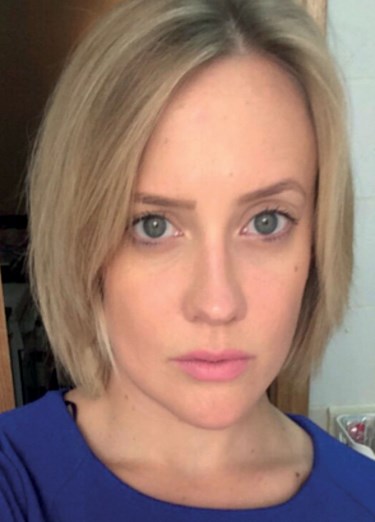 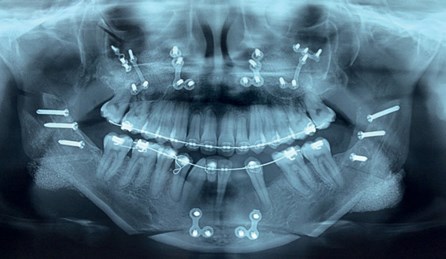 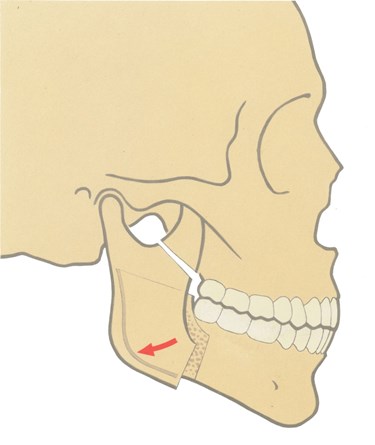 Figure 4: Graphical illustration of the clockwise rotation of the condyle-bearing segment in sagittal split procedures.

This method is suitable for the correction of transverse deficiency and minor augmentation posteriorly or caudally (Figures 2 and 3) [3]. The technique is via a mucosal incision on the oblique line analogous to the incision for a sagittal split procedure. The jaw angles are reached by sub-periosteal dissection, leaving the pterygo-masseteric sling attached to the lower border. Extra-orally the hydroxyapatite and calcium carbonate particulate (Pro Osteon®, Biomet, Warsaw, US) is mixed with fibrin sealant (Tisseel®, Baxter Healthcare Corporation, Westlake Village, US) forming a ‘putty’. This resorbable osteoconductive ‘putty’ is inserted into the subperiosteal lateral gonial pocket and moulded into the desired form. Excess material is removed with suction. The setting time for the material is five minutes.

The gonial angle can be enhanced through a sagittal split osteotomy. This technique provides better results over HA-fibrin sculpting alone when posterior augmentation is required. After separation of the proximal (condylar) and distal (tooth bearing) segments, the latter part is positioned and secured to the maxillary teeth with the intermaxillary wafer. Then the condylar segment is positioned to achieve a favourable condylar head relationship in the glenoid fossa. At the next stage gentle clockwise rotation of the proximal segment is performed to optimise gonial projection. It is important to preserve the condylar position during this movement (Figure 4). Bilateral placement of a single screw to achieve rigid osteosynthesis allows the surgeon the option of quickly releasing the intermaxillary fixation and assessing the mandibular protrusive and lateral excursions to confirm correct condylar position prior to completing triple screw fixation. Contouring of residual interosseous gaps at the lower border or a desire to augment and increase the lateral projection is achieved with the ‘HA-fibrin glue putty’ technique described above (Figure 5). 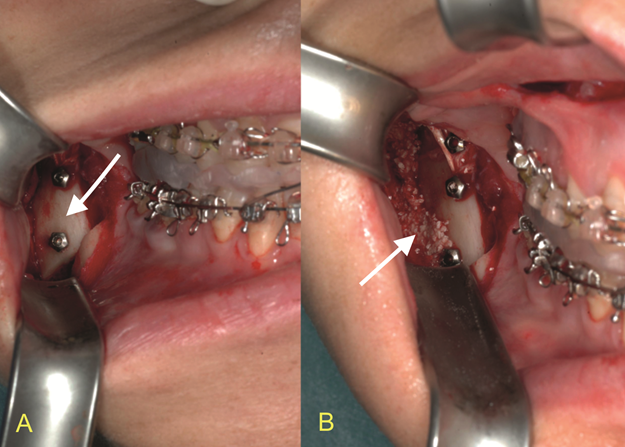 Figure 5: Intraoperative pictures of a clockwise rotation of the proximal segment in a sagittal split osteotomy procedure. a) The vertical osteotomy site with screw fixation in place. The condyle-bearing segment (arrow) is clockwise rotated and there is a visible gap at the height of the external oblique crest.
b) The matrix of HA and fibrin glue to fill up the gap at the lower mandibular border and to augment the jaw angle laterally (arrow).

The CAD-CAM process has two prerequisites. Firstly, planning software. We use ProPlan® and 3-matic® (Materialize, Leuven, Belgium). And secondly, access to a metal 3D printing company, such as 3D-Systems / Layerwise (Leuven, Belgium). After designing a virtual ‘ideal’ jaw angle for the patient the 3D data is translated into surgical grade titanium. At surgery, via a buccal sulcus incision with adequate subperiostal preparation around the mandibular angle the titanium neo-angle is precisely positioned and secured with screws. The location and projection of the screws are designed to avoid neurovascular structures. We bathe the titanium implant in rifampicine solution (Rifadine®, Sanofi, Belgium) before placement. This method allows a deficient angle to be reconstructed in all planes (Figures 6 and 7). 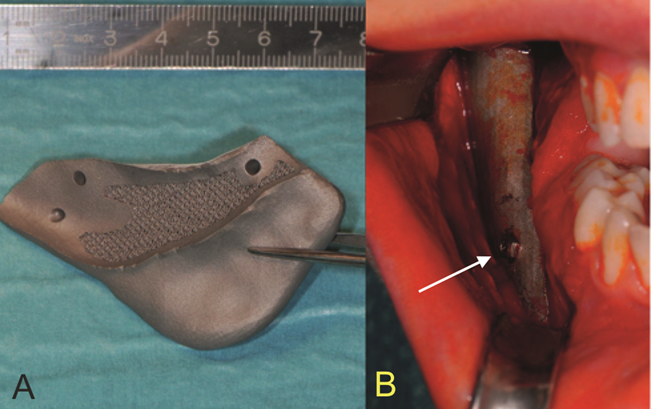 Figure 6: Titanium 3D print. a) The surfaces in contact with the bone are made with diamond unit cell porosities to enhance friction
and osseointegration. b) Intraoperative picture with perfect fit and fixation with screws (arrow). 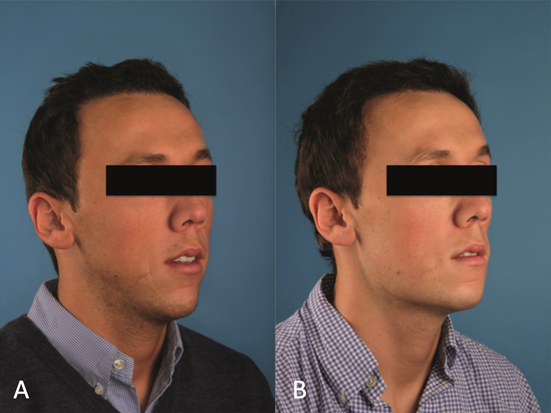 In asymmetrical craniofacial malformations such as hemifacial microsomia, ‘virtual mirroring’ allows the dimensions of the normal side to be superimposed on the deficient side. However, a challenge exists with bilateral angle hypoplasia. This requires careful 3D planning to simulate the ideal mandibular profile and meet patient expectations.

A bilateral sagittal split osteotomy per se does not address the deficient jaw angle in the anterior-posterior projection in hemimandibular elongation [4]. In these cases we advise repositioning the condyle-bearing segment in a clockwise direction. This results in the angle projecting postero-inferior and is a purely cosmetic manoeuvre. We have not observed any complications with this technique but in theory a degree of trismus may occur.

In cases of lateral deficiency only, augmentation only methods are indicated. We prefer the HA-fibrin ‘putty’ technique over other alloplastic materials (e.g. porous polyethylene or silastic) [5,6]. However, no systematic review exists defining the contemporary gold standard. However, we feel that biomaterials, excluding titanium, made from molecules compatible and interchangeable with human tissue are preferable.

This article addresses the contemporary techniques available to correct single plane or multi-plane deficiencies of jaw angles. The aesthetic outcome and longevity of the techniques, if correctly applied, can be exceptional. 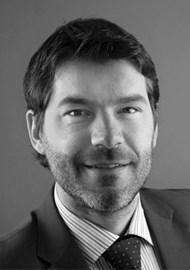 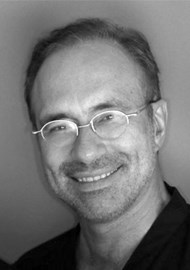