How I Do It - Skin tightening: Fotona 4D protocol
By Adrian Gaspar

Skin tightening, especially on the face, is currently one of the most common aesthetic procedures. There are many approaches to facial skin tightening, many of them executed with various energy-based devices, such as lasers, radiofrequency and ultrasound devices, all of them acting on collagen with various levels of hyperthermia.

Several years ago I started to use a combined, non-invasive protocol called Fotona 4D in which two laser wavelengths (NdYAG 1064nm and ErYAG 2940nm) are used in four different modalities (SmoothLiftin, Frac3, Piano and SupErficial) during the same visit with a goal to thermally process various depths and structures of the facial skin.

The first step of Fotona 4D protocol is SmoothLiftin, a solution for reduction of nasolabial folds and perioral wrinkles. A special non-ablative modality of ErYAG called Smooth Mode is used intraorally applying the bursts of four to six Smooth pulses at intraoral mucosa and executing four passes across the whole accessible tissue beneath both cheeks and lips. A PS03 handpiece is used with 7mm spot, 9.0-10.0J/cm² and 2.0Hz. No anaesthesia is needed as this intraoral treatment is not painful.

For the next two steps, Frac3 and Piano, the laser wavelength is changed to 1064nm NdYAG. I first do the Frac3 mode in which short pulses (0.1-0.3msec) are used with a purpose of achieving shrinkage of deep shrinkable structures (retinacula cutis) in anchoring areas of the superficial muscular aponeurotic system (SMAS). With this we can produce the vectors of tension in the skin along the SMAS anchoring areas mimicking the threads. For this modality I use the R33 handpiece, 4mm spot, 35J/cm², 0.1-0.3msec and 4Hz. A few passes are delivered along the SMAS anchoring areas. For this modality there is also no need for any anaesthesia as there is merely a very tolerable sensation of warmth during the execution of Frac3.

Immediately after Frac3 I proceed to the third step – Piano mode, using R34 with 15mm spot, 100-300J/cm2 and 21 second pulse duration. Piano NdYAG is a modality in which extremely long laser pulses are used (in seconds), producing a gentle painless warming of the skin through all its layers. As such, bulk skin heating is applied across the whole face with a manual scanning technique until the temperature at the skin surface reaches about 42°C. I usually maintain this temperature for about three minutes at each of scanned areas.

For the last step, SupErficial, the laser wavelength is changed back to 2940nm ErYAG and a very light peel is performed to give a pearl finish, reducing the imperfections and improving the appearance giving a special glow to the skin. For this last step I usually use the R04 handpiece with 10mm spot, MSP pulse duration, 0.7J/cm² and 5Hz.

An example of a 59-year-old patient who initially received three Fotona 4D sessions and was then maintained with one session every four months. The figures demonstrate the patient before, after three sessions, after six sessions and after three years.

There is no need for any special postoperative procedure as the whole treatment is so minimally invasive that the only side-effect is mild erythema which could last up to a few hours.

To get the full effect of the collagen remodelling I usually do two sessions with one month apart and then, depending on the patient’s age, a maintenance session every six months for patients younger than 50 and every four months for patients older than 50. In this way it is possible not only to maintain good tightening and rejuvenating effect of the facial skin for a long time, but also to further improve it through time. I have many satisfied patients who have been on this regime for three and more years.

Declaration of competing interests: The author has received honorarium and reimbursement for speaking at conferences about laser treatments and for taking part in educational workshops worldwide by Fotona. 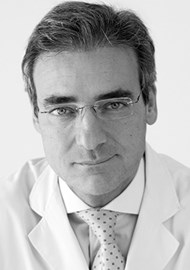 Former Professor at the Gynecology Department of the Faculty of Medicine at Mendoza University, Argentina; and Owner and Director of the Espacio Gaspar Clinic of Gynecology, Anti-Aging and Bioregenerative Medicine in Mendoza, Argentina.