Submental and submandibular abscesses are frequent in oral and maxillofacial surgery; on the other hand submandibular haematomas are uncommon. However, we encountered a submandibular haematoma, initially masked as a Ludwig’s angina, which was compromising the airway of a warfarinised patient whose international normalised ratio (INR) was 26 on assessment. These cases are rare in the literature, especially when considering such a high INR and airway compromise. This case serves to highlight the importance of considering a spontaneous haematoma in such patients who present in this manner with no history of trauma.

A 45-year-old male attended Accident & Emergency complaining of a swollen tongue and throat. He had difficulty in speaking and swallowing. He also described a recent episode of dental infection in a lower tooth. Clinically there was a large firm bilateral submandibular / submental swelling and the floor of mouth was raised. The overall picture at this point was typical of a patient with Ludwig’s angina.

Medically he suffered from recurrent deep vein thrombosis, anxiety and depression. He was a chronic alcoholic. He was taking warfarin amongst other medication. Unknown to us at that point, he had previously attempted suicide with an overdose of warfarin tablets.

Initial investigations included blood tests and an orthopantomogram (OPG). The INR was 26. The OPG showed a large periapical radiolucency associated with the lower left lateral incisor which had previous endodontic treatment but no dental / bony cause for his advanced neck swelling was identified. A CT scan (Figure 1, 2 and 3) indicated that there were soft tissue density masses present within the floor of the mouth. They most likely represented a haematoma but an abscess could not be excluded. The airway was markedly compromised. He was immediately planned for surgical intervention with the input of the haematologist and anaesthetist, along with urgent treatment to reverse the effects of Warfarin. 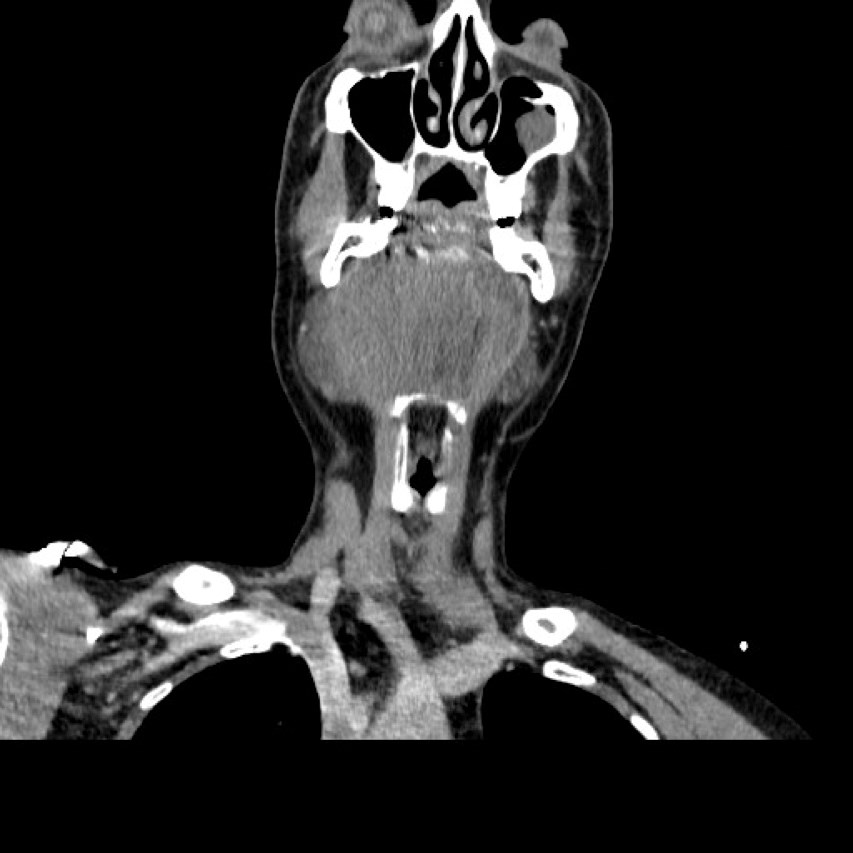 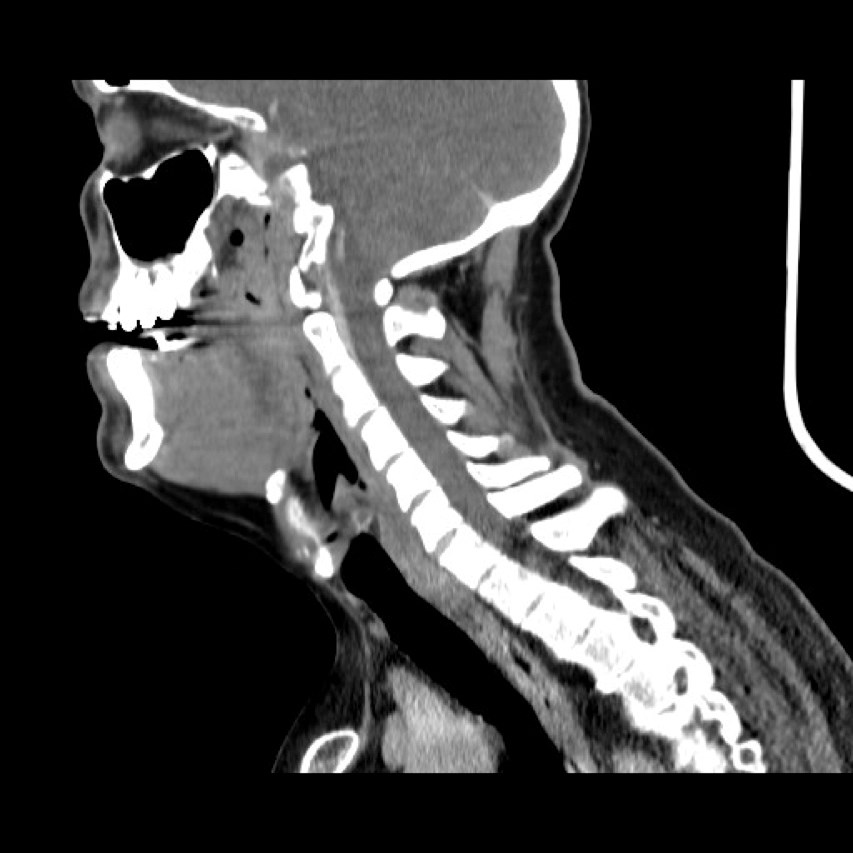 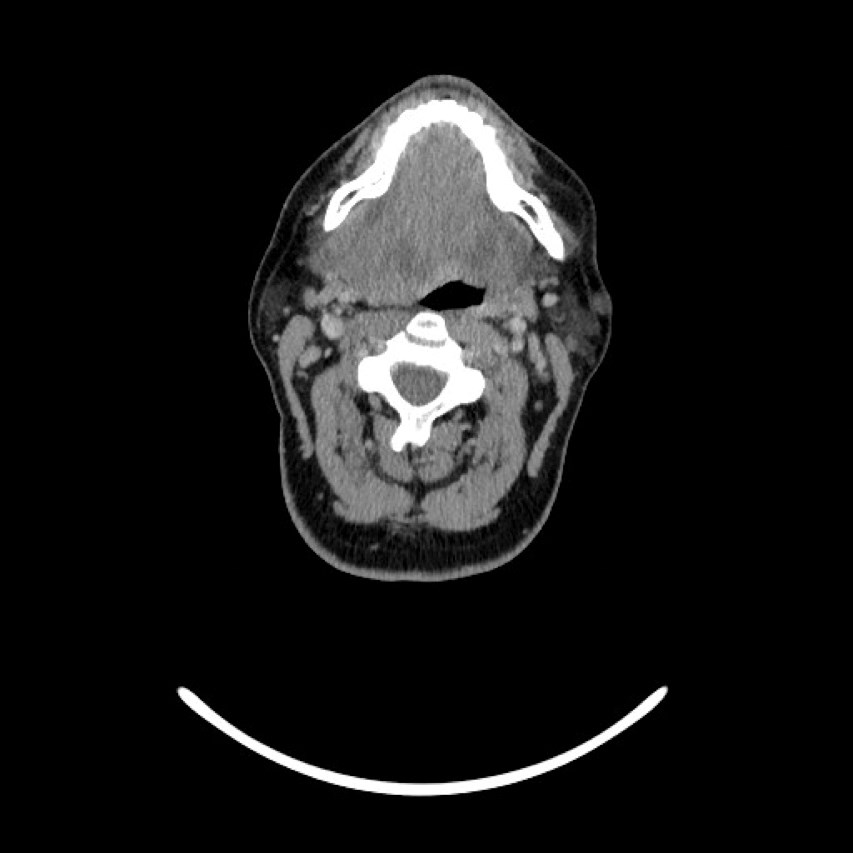 Figure 3 (transverse view): CT showing a large indistinct mass / swelling of the submandibular and submental spaces with compression and deviation of the airway. Not a typical appearance of an abscess.

After discussion with the consultant haematologist, Warfarin was stopped for 48 hours with an aim of reducing the INR to 1.5. Vitamin K and Octaplex were given. Tinzaparin was to be given after surgery. The consultant also suggested fresh frozen plasma might be required.

The patient was taken to theatre after appropriate control of the INR. Awake fibreoptic intubation and a tracheostomy were performed to secure his airway. Neck spaces were explored, no pus identified and bilateral submandibular and submental drains placed. There was no abnormal tissue to biopsy. He was subsequently taken to the intensive therapy unit where he gradually improved. There was an insignificant collection of blood in the drains placed. Further CT scans showed significant resolution of the soft tissue abnormality in the submandibular / submental region. The patient was discharged after spending a total of 12 days as an inpatient with no significant complications.

The patient underwent an interval MRI scan, which showed no evidence of vascular lesion, tumour or collection. He was subsequently discharged to the care of haematology and his GP.

Our presented case is unique, with the combined symptoms of a bilateral large submento-submandibular swelling and haematoma, extremely high INR, airway obstruction, and associated dental pain.

The cause of the excessive INR was not certain. High values of INR could be linked with several causes. Warfarin toxicity is common with dose changes or drug interactions being the usual cause [1]. Warfarin itself is not routinely used for attempted suicide or self-harm [2].

Acute alcohol consumption can increase the anticoagulation effect of warfarin. This may be by decreasing the metabolism of warfarin in the liver or by increasing the amount of free warfarin available for its pharmacological effect by displacing it from the plasma protein (human serum albumin) that it is normally attached to [3]. A decreased liver function or liver impairment (that may be subsequently caused by alcoholism) is well documented to affect the warfarin response where warfarin is metabolised [4]. These patients have poorer anticoagulation control and more haemorrhages [5].

As in this case, reversal of warfarin should be considered immediately. Stopping the drug and administering intravenous vitamin K are the routine initial steps. For more urgent cases, prothrombin complex concentrate (PCC) or fresh-frozen plasma (FFP) can be used [2,6].

It is important to have a low threshold to perform MRI / CT scans / ultrasound scans if time permits for accurate assessment. It helps guide diagnosis and possibly could prevent surgery in a patient with an increased INR. Securing the airway in these patients is of paramount importance and should be performed in the context of their presenting pathology.

Patients who present with submandibular / neck space swellings on a background of high INR should be discussed with the consultant haematologist and anaesthetist urgently and appropriate investigations performed in a timely manner to facilitate their care effectively when the airway is compromised.